A shadow has been cast over his television career after it was revealed his best friend and one-half of his double act, Ant McPartlin, will take some time out to return to rehab.

But Piers Morgan backed Declan Donnelly to go it alone while his embattled TV co-host tackles his demons during Wednesday’s Good Morning Britain.

The outspoken journalist suggested that Ant makes a public statement to confirm he has given his long-time friend his blessing to go solo or find a temporary presenting pal while he takes some time out from the spotlight.

‘The show must go on’: Piers Morgan backed Declan Donnelly to go it alone while his embattled TV co-host tackles his demons during Wednesday’s Good Morning Britain

While the two revealed in their 2004 biography that they have made a pact to never break away from their double act, Piers, 52, said the circumstances should countermand their vow.

‘I don’t think they would have taken into account an illness,’ Susanna Reid remarked, which Piers agreed with.

He asserted: ‘If Ant was to say publicly “the show must go on”, they’ve got big teams of people working for them on these shows, their livelihoods are affected as well.

‘I think that would be the right thing to do. I think Dec should carry on, with somebody else, if necessary.’ 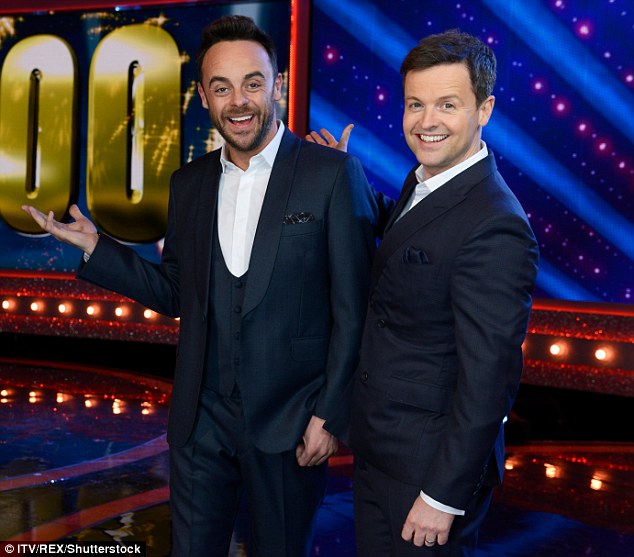 In doubt: A shadow has been cast over Dec’s television career after it was revealed his best friend and one-half of his double act, Ant McPartlin, will take some time out to return to rehab 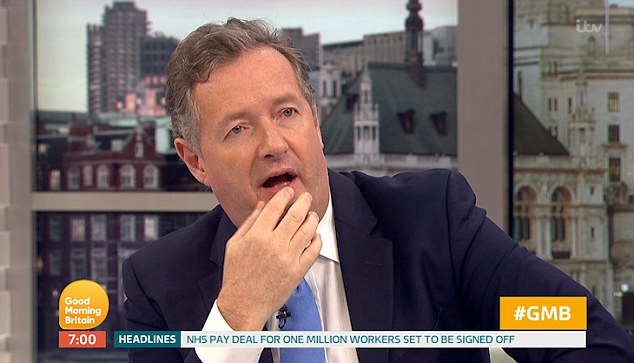 ‘I think that would be the right thing to do’: Piers suggested Ant makes a statement to confirm he has given Dec his blessing to go solo while he takes some time out

Co-host Kate Garraway then interjected that Dec could only go solo if Ant confirmed he had encouraged it.

Piers concurred: ‘He can’t be seen to be knifing his mate, but I don’t think he is. Ant would have to say “I’ve told him to do this”.’

Piers – who worked with Ant during his judging stint on Britain’s Got Talent back in 2009 – said during Tuesday’s show that after 20 years of knowing the Geordie entertainer, he no longer ‘recognises him’ after he was arrested for drink-driving on Sunday.

Meanwhile, a visibly devastated Declan was seen going for a low-key stroll with his wife Ali Astall on Wednesday morning, soon after the GMB broadcast. 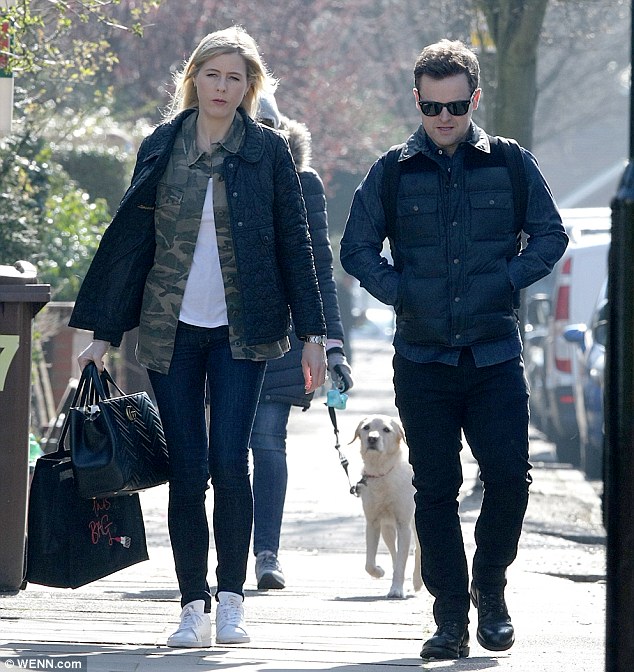 Stepping out: Soon after the broadcast on Wednesday morning, Declan was seen leaving his London home with wife Ali Astall as they took their pet dog for a walk 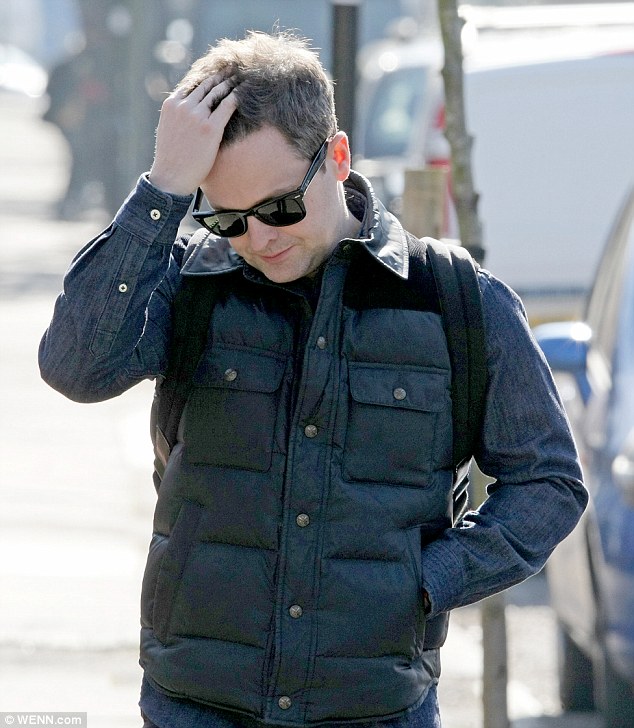 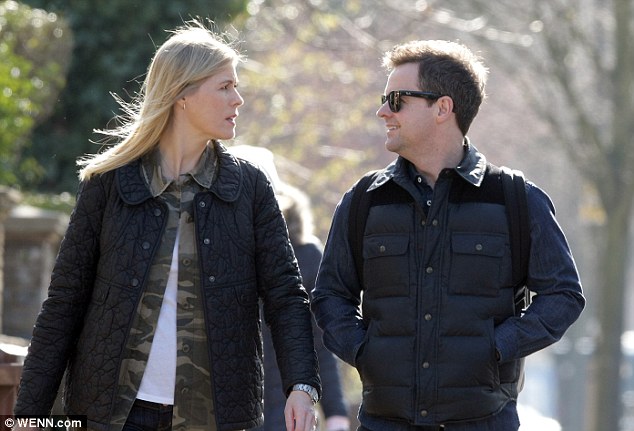 Smile: He briefly flashed a smile in the midst of his otherwise serious conversation with Ali

The TV personality looked downcast as he and his wife walked their pet dog through their neighbourhood while engaging in what appeared a serious conversation.

Shielding his eyes with a pair of sunglasses, the normally jovial Geordie wrapped up in a black quilted gilet and matching jeans for his stroll.

Ant collided with two other cars after taking his dog for a walk in Richmond Park, south west London, and had been taken into police custody while they investigated the crash, but was later released.

On Monday, the 42-year-old presenter confirmed he had entered into a treatment facility and had withdrawn from all TV commitments while this weekend’s episode of Takeaway had been cancelled. 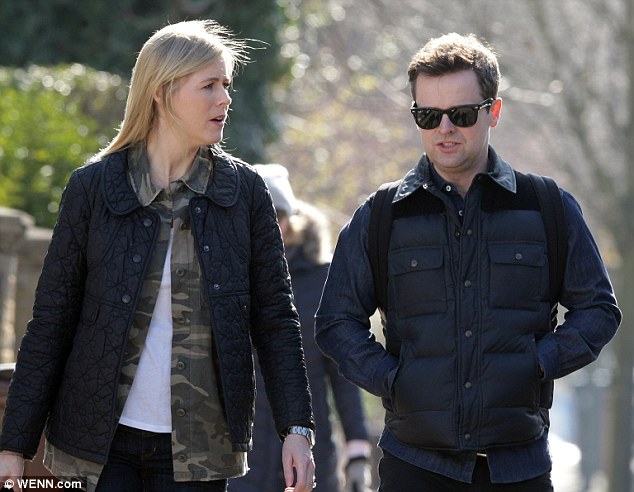 Shades: The star shielded his eyes behind a pair of stylish sunglasses for his leisurely outing

Black to basics: : He wore a black quilted gilet, which he teamed with a pair of matching jeans

He said: ‘He’s definitely changed, no question. I never would have thought he would do that [get divorced] for example, let alone this.

‘This Ant McPartlin is not the guy I know. His life is faltering and tormented for some reason.

He shared: ‘The truth is he has never really been the innocent boy that people have pictured him, he has always liked to drink and a laugh and to party. I remember that from our days working on Britain’s Got Talent.

‘But I don’t recognise this guy and I think he has wrestled with that squeaky clean image for a long time. He rebelled against it a bit and has gone too far and now he is in trouble.’ 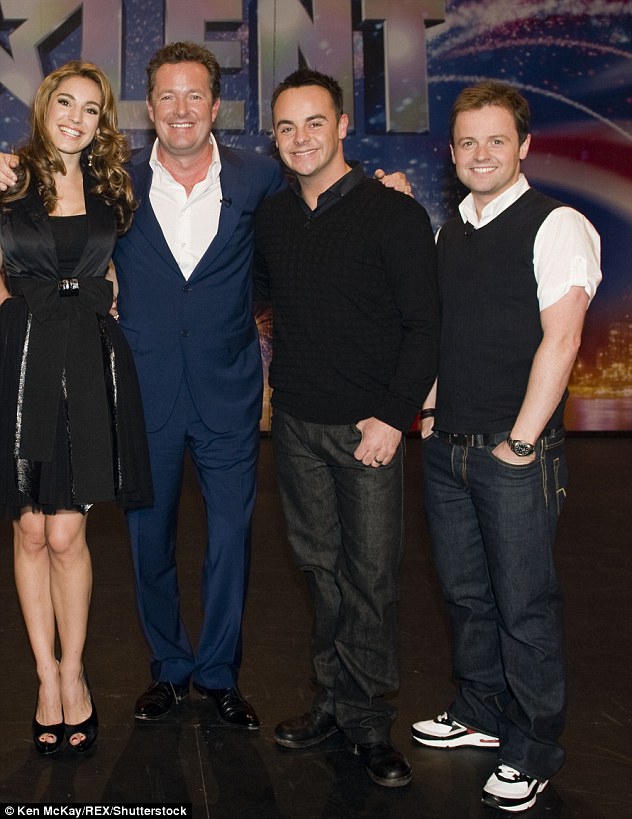 Changed: Piers has known Ant for 20 years and previously worked with him on Britain’s Got Talent (Pictured with Kelly Brook, Ant and Dec in 2009) 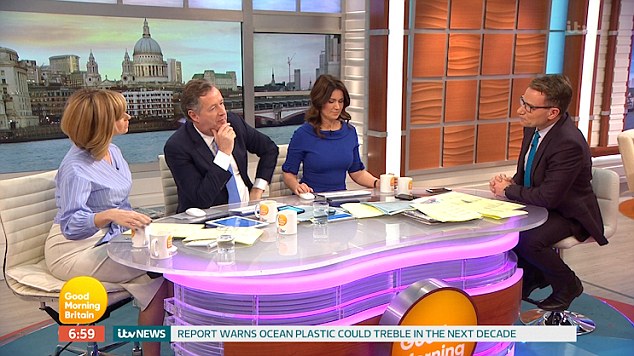 ‘He’d need his blessing’: Co-host Kate Garraway then interjected that Dec could only go solo if Ant confirmed he had encouraged it