‘Where do you want to go?’ asked Captain Ross Cameron as our beautiful motor-yacht slid away from Saint-Laurent-du-Var harbour near Nice Airport.

And there, right there, is why I love boat holidays: it’s the freedom to go where the hell you like, when you like, and to do so in the wild, unpredictable, scarily powerful and gloriously refreshing ocean.

As Sir Francis Drake put it: ‘It isn’t that life ashore is distasteful to me, but life at sea is better.’ 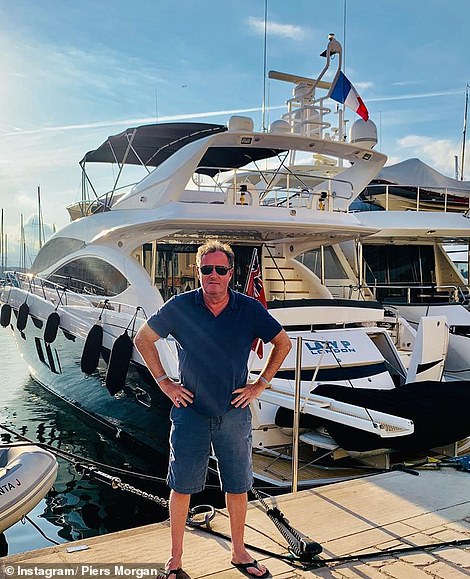 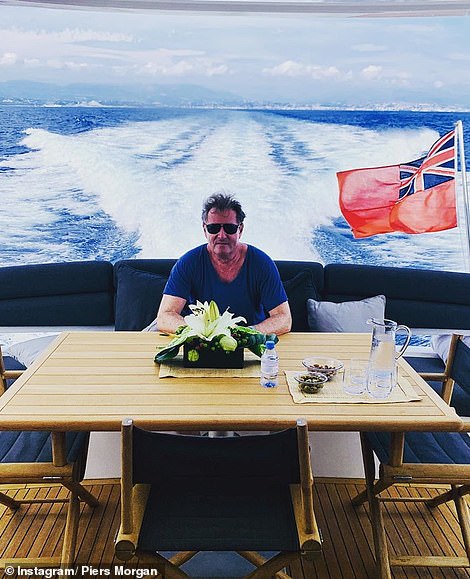 Piers posted several pictures from his Riviera adventure to his Instagram page. He captioned the image on the left ‘I fully intend living up to the name of my boat this week’ and the image on the right ‘my office for the next 10 days’

Each summer, I take my three sons – Spencer, 26, Stanley, 22, and Bertie, 18 – on a lads’ trip, either to a Caribbean beach or as on this occasion, something a little more adventurous.

We rented a 73ft motor yacht named, appropriately, ‘Lazy P’ from Dorset-based Sunseeker Charters, a superbly professional and efficient firm that can cater to any maritime whim.

Lazy P accommodates up to eight guests in four cabins, and sports its own tender, water-skis, wakeboard and snorkelling kit.

We had a two-person crew including Captain Ross, a very experienced Kiwi skipper, and a delightful young lady named Lucy, who acted as deckhand, cleaner and expert cook – preparing us a series of delicious breakfasts and lunches. 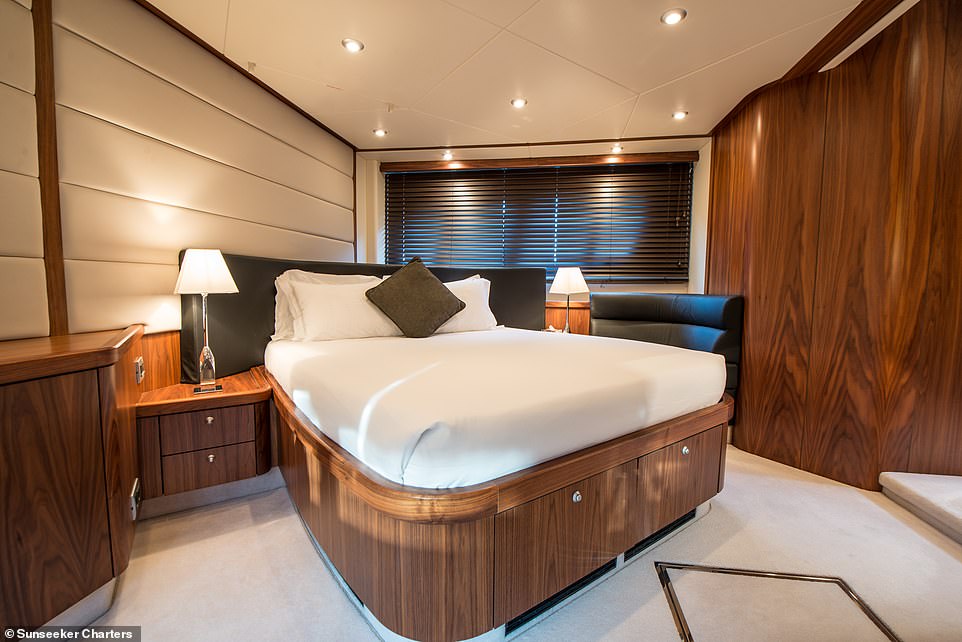 Our days were spent carousing the French Riviera, finding charming bays to anchor in, and our nights were spent berthed in ports and sampling the delights of French gastronomy in a series of fabulous restaurants.

‘Where do you suggest for our first day?’ I replied to Captain Ross.

So we did, and they were.

‘Where are we dining tonight?’ I asked Captain Ross again, having left most of our meal bookings to him.

He was right, again.

I quickly realised that ‘pretty nice’ is Kiwi for ‘outstanding’. 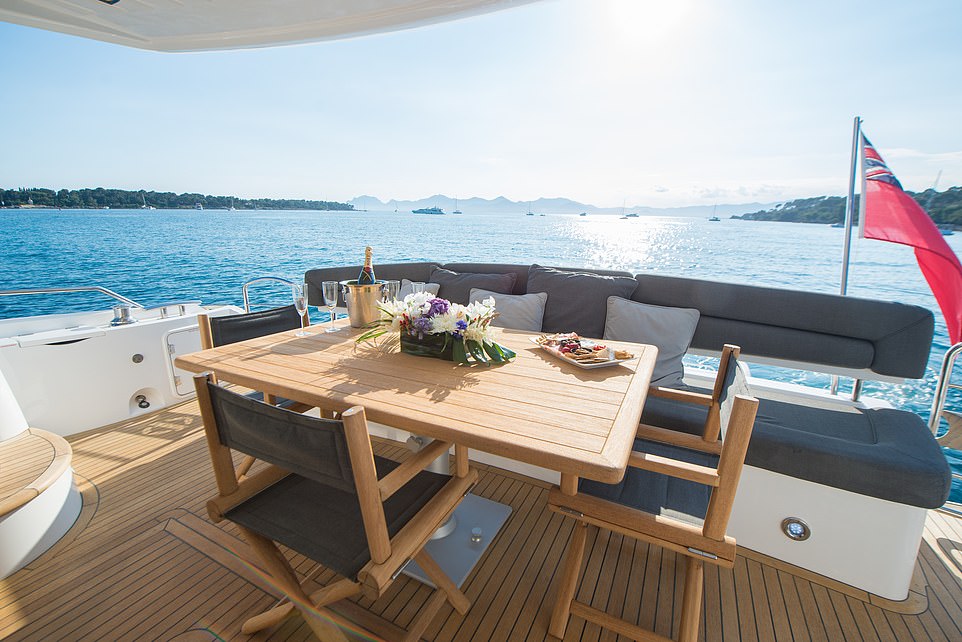 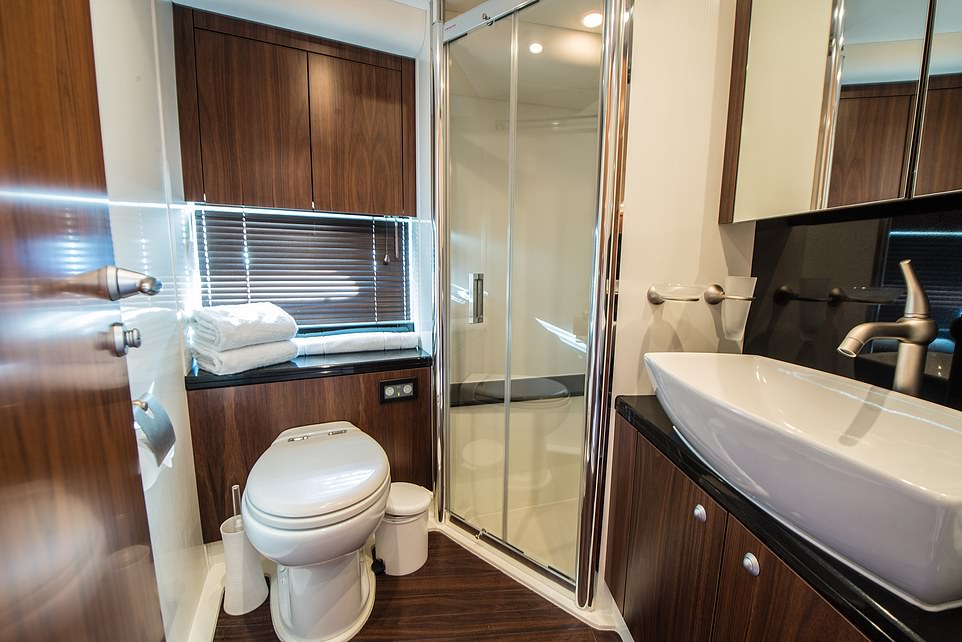 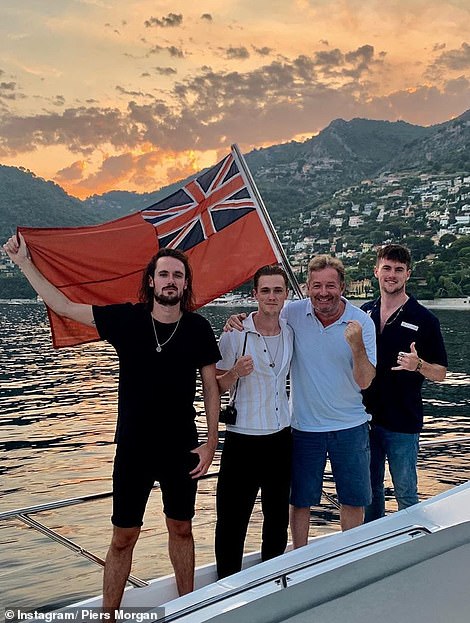 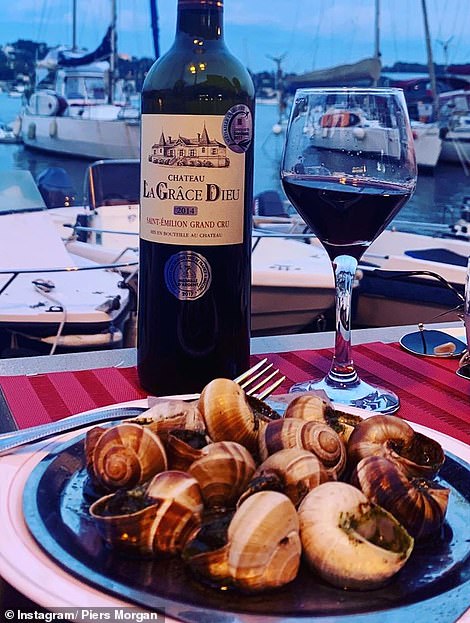 Le Maschou, a charming cave-like restaurant in the old part of Cannes, is famed for its set menus where your only choice is a main dish of chicken, beef or fish – and you then sit back and watch platefuls of gorgeous grub arrive at your table. It was one of the best meals I’ve ever had, a fabulous start to our holiday.

Our itinerary had structure, but was always flexible.

We visited Cannes, Monaco, Eze, Antibes, Villefranche, Beaulieu, and the little-known but lovely Porquerolles island, before spending the last two days in St Tropez where my wife Celia and seven-year-old daughter, Elise, were staying in a friend’s villa.

It was a blissful trip; the sun shone ferociously (we went during the last 10 days of August), the waters seemed warmer than usual but cool enough to be constantly refreshing, and our days were spent swimming, sleeping, reading, arguing about Trump and Brexit (I assume everyone’s family holiday now features these tribal, irreconcilable debates), and watching the unbelievably exciting Ashes Test match at Headingley where Ben Stokes played the greatest innings in history and our increasingly frenzied screams and groans could be heard in Italy. 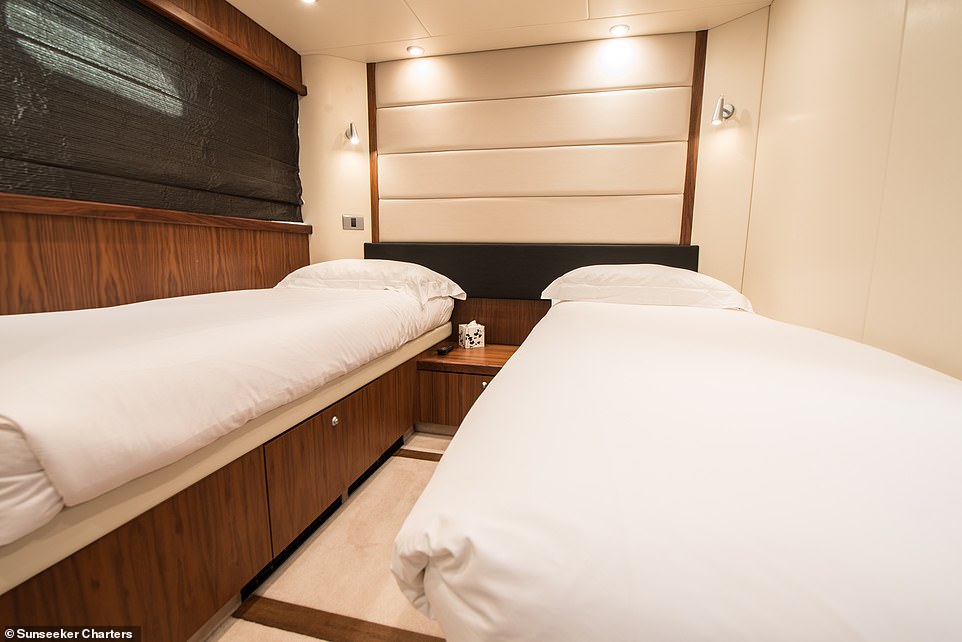 The days were spent swimming, sleeping, reading and arguing about Trump and Brexit, writes Piers 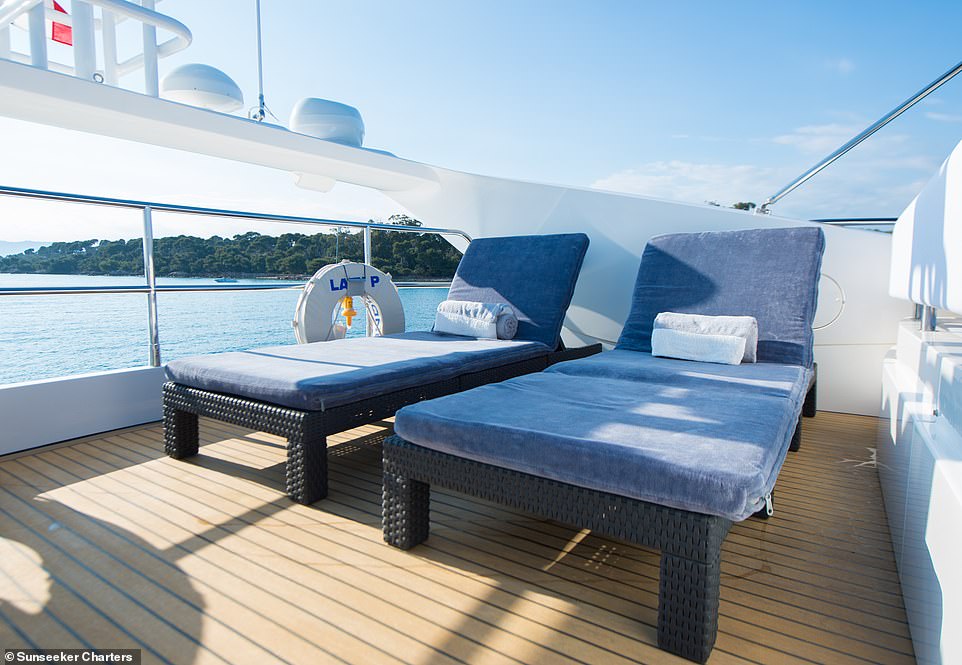 It wasn’t all relaxation, Piers reveals that he did do some exercise on the trip – lifting weights and arm wrestling with his son Stanley 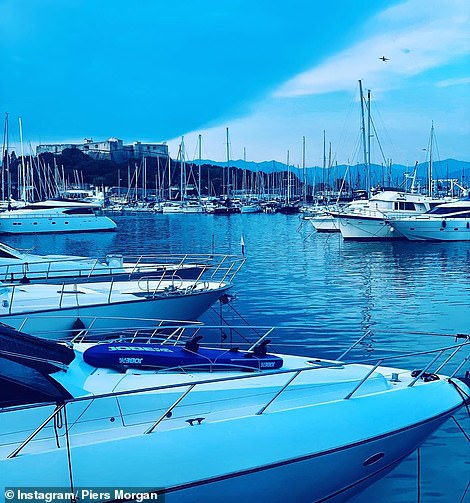 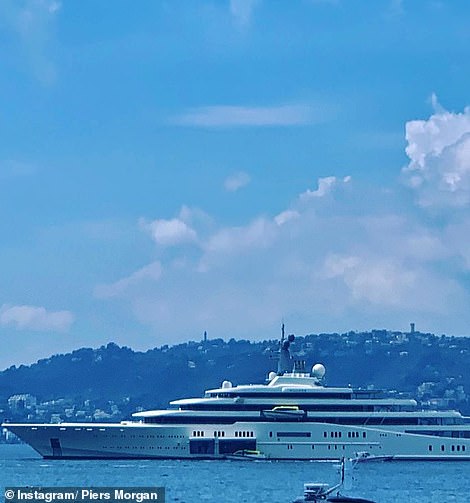 I did try to do some exercise too, even asking Captain Ross to source some weights to be brought onboard.

‘You’ll never use them,’ he chuckled.

This was the only thing he got wrong all trip.

Stanley’s a fitness freak, and was determined to drag me into his ferocious daily on-board routine.

Predictably, given how competitive we all are, it soon descended into an arm-wrestling contest that he comfortably won.

‘I think I’ll do some shadow boxing,’ he sighed, ‘might give me a tougher fight.’

Gastronomic highlights included stunning dinners at Michelin-starred La Passagère in Juan-les-Pins (have the tasting menu), the wondrously located Anjuna at Èze-bord-de-Mer where Bono has a home, and a riotous six-hour lunch with England cricket legend Allan Lamb and several billionaires at La Guerité, a glitzy restaurant in the Cannes islands that can only be reached by boat and where Sir Elton John and the Beckhams had dined the day before. 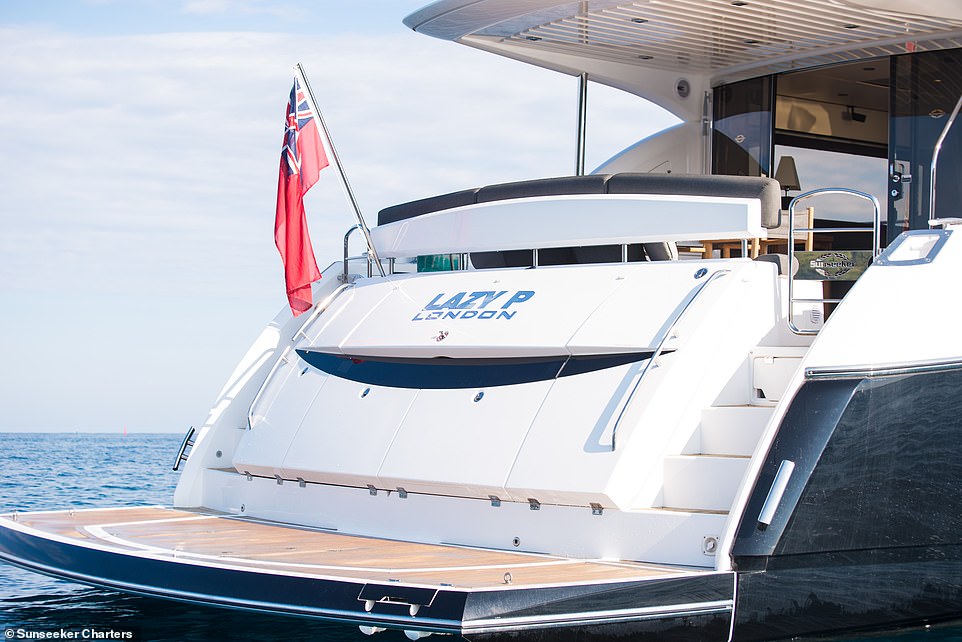 Gastronomic highlights, writes Piers, ‘included stunning dinners at Michelin-starred La Passagère in Juan-les-Pins (have the tasting menu), the wondrously located Anjuna at Èze-bord-de-Mer where Bono has a home, and a riotous six-hour lunch with England cricket legend Allan Lamb’ 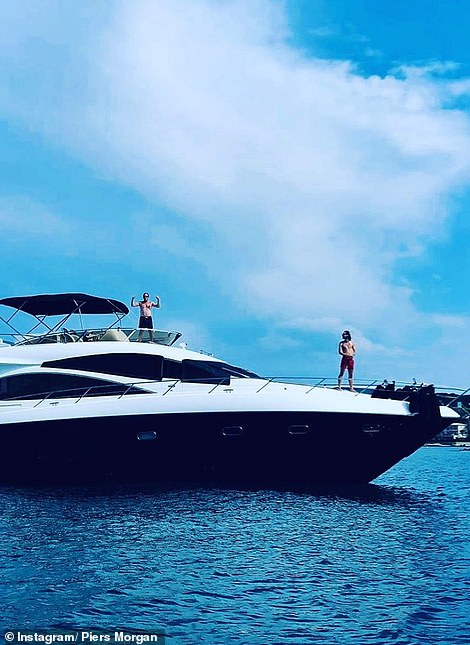 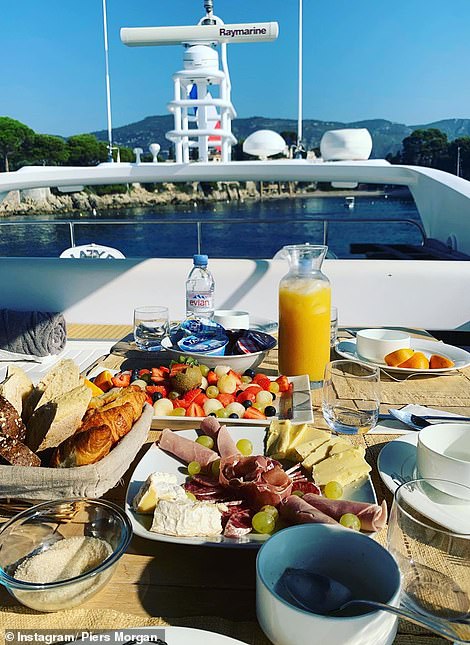 The picture on the left was taken by Piers at Beaulieu-sur-Mer. And the Instagram image on the right was captioned ‘today’s gruelling breakfast spot’

The next morning, when I stumbled upstairs for morning coffee feeling like a two-ton truck had run me over, Lucy was waiting with a glass of water and some pills.

Now THAT is service.

Part of the magic of the South of France is the sense of glitz, glamour and showbiz that pervades the whole region.

At Michaelangelo, a starry Italian nightspot in Antibes, we were treated like kings after the legendary owner Mamo rushed over to greet me, said how much he liked my TV shows, and sent us over some delicious extra complimentary dishes including a truffle pizza that was insanely good.

His only request was that I have my picture taken with him, at which point he then showed me his other celebrity pictures, scattered all over the walls. 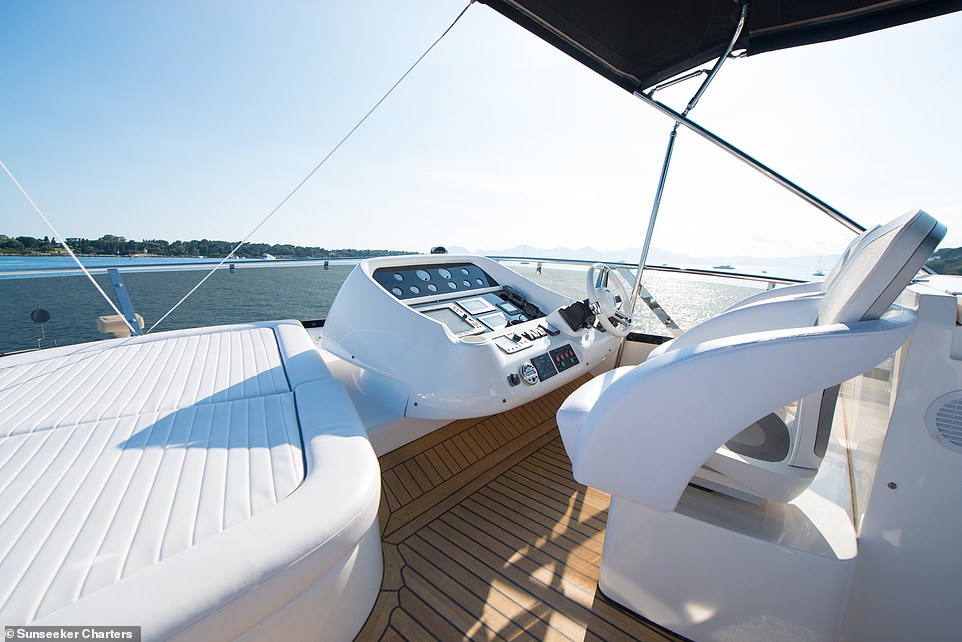 Lazy P comes with a crew of two – a very experienced Kiwi captain and, writes Piers, Lucy, ‘who acted as deckhand, cleaner and expert cook, preparing us a series of delicious breakfasts and lunches’ 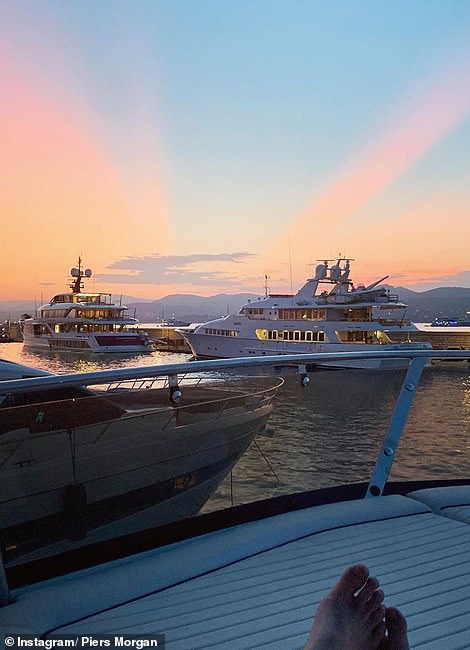 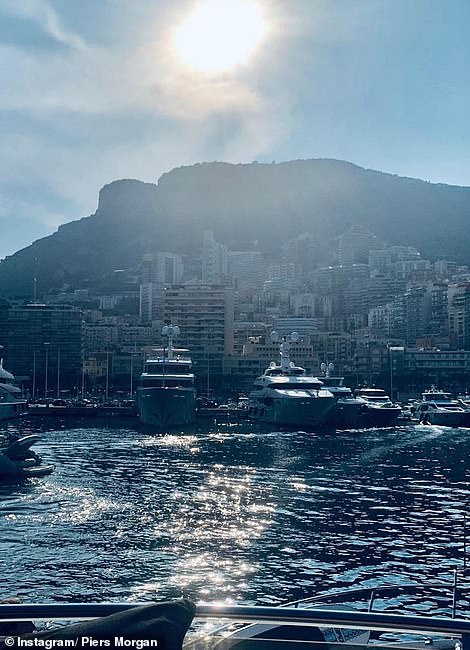 St Tropez was one port of call (left) and Monaco (right) was another. When in St Tropez, Piers highly recommends eating at Le Club 55

It was incredible – he was with everyone from first man on the moon Neil Armstrong and President Obama to Beyoncé, Jack Nicholson, Brad Pitt and Robert De Niro.

Then above a door, I spied a rogues’ gallery of Harvey Weinstein, Woody Allen, OJ Simpson and Kevin Spacey.

‘That’s my wall of shame,’ he chuckled.

‘I hope that’s not where I’m going?’ I laughed, nervously.

The highlight of my regular trips to St Tropez, my favourite part of the Riviera, is always a long lunch at Le Club 55, the impossibly cool restaurant immortalised by Brigitte Bardot.

We parked Lazy P a few hundred yards off Pampelonne Beach, and the Club 55 tender picked us up and sped us in.

‘You’re not even an MBE?’ asked Joan’s husband Percy, incredulously.

‘Honours are only given to upstanding and beloved members of society,’ scoffed Sugar. Which does prompt the obvious question: why has he got one?

We dined on slabs of sumptuously fresh sea bass, and gallons of Minuty rosé, and had a wonderful time. It’s where I’d like to have my last ever meal.

The next day, Lord Sugar and his long-suffering wife Anne invited me onto their vast and undeniably beautiful gin palace Lady A, for a splendid lunch and some very competitive jet-ski racing with my children.

‘How long have you been trapped on here with Alan this summer? I asked Anne.

I finally found something to make me shudder about a boat trip.

After ten days, I was ready to return to land.

But it had been a blissful trip.

The ultimate test of any holiday is would you do it all over again? 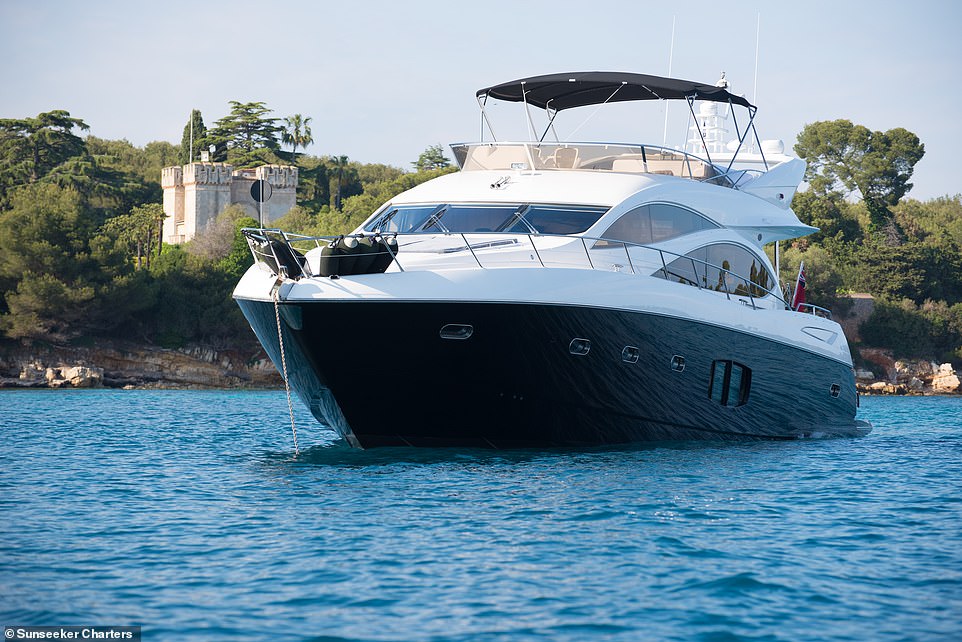 Lazy P is perfect for those wishing to explore the Cote d’Azur, Corsica or Sardinia, says Sunseeker Charters