PIERS MORGAN: FBI is the Federal Bureau of Incompetence

The Federal Bureau of Investigation’s official website couldn’t be any clearer about the purpose of the organisation.

‘The mission of the FBI,’ it reads, ‘is to protect the American people.’

As for the role of its much-vaunted Special Agents, the FBI defines their job as: ‘Staying ahead of the threat through leadership, agility and collaboration.’

Where do those two bold statements of intent sit today, I wonder?

It’s hard to imagine there has even been a worse week for the FBI in its 109-year history.

First, they were forced to admit they spectacularly dropped the ball on the Florida mass shooter.

On January 5 this year, the FBI received a call to its Public Access Line, a service specifically set up to encourage people to report crimes or threats.

This wasn’t a vague call to the hotline’s West Virginia call center.

It was very, very specific.

‘A person close to Nikolas Cruz,’ read the FBI statement, ‘provided information about Cruz’s gun ownership, desire to kill people, erratic behaviour, and disturbing social media posts, as well as the potential of him conducting a school shooting.’

What should have happened next is blindingly obvious.

‘Under established protocols,’ the statement continued, ‘the information provided by the caller should have been assessed as a potential threat to life (and) forwarded to the FBI Miami Field Office where appropriate investigative steps would have been taken.’

But staggeringly, shamefully, it wasn’t.

As the FBI conceded, ‘the information was not provided to the Miami field office, and no further investigation was conducted at that time.’

How is it even possible that such a detailed, terrifying warning could be ignored?

FBI Director Christopher Wray said: ‘It is up to all Americans to be vigilant, and when members of the public contact us with concerns, we must act properly and quickly.’

Thanks for the reminder of what the FBI is supposed to do with tips like that.

But an American WAS vigilant, and DID contact you with concerns, and you acted improperly, and not just slowly but non-existently.

This wasn’t the only warning the FBI received about Cruz. 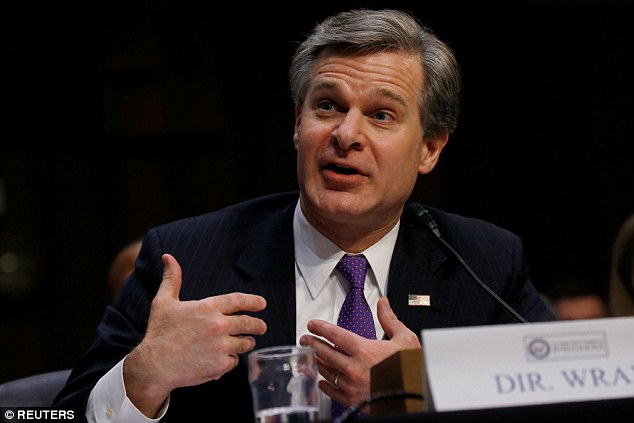 ‘I’m going to be a professional school shooter.’ wrote Cruz on a video that had been shared by YouTube vlogger Ben Bennight – who ALSO called the FBI

In September, 2017, YouTube vlogger Ben Bennight contacted the FBI to report that a user named ‘Nikolas Cruz’ had left the following comment on one of his videos: ‘I’m going to be a professional school shooter.’ Two agents were despatched to interview Bennight the next day but the FBI was apparently unable to trace the commenter.

How many people named Nikolas Cruz are there in America right now?

Had the FBI done their job with either of these tips, they would have learned that Cruz had received treatment for mental illness, had been thrown out of the school for violent conduct, and that he posted regular social media threats and sinister gun images.

They would also have learned that he bought not one but SEVEN rifles in the past year.

In short, they would have learned this was someone very likely to do something very bad very soon.

Director Wray said the FBI had ‘spoken with victims and families, and deeply regret the additional pain this causes all those affected by this horrible tragedy.’

Additional pain? Try, ALL their pain.

The FBI was told how dangerous this guy was, how heavily armed he was, how unstable he was, and how he might shoot up a school.

Their abject failure to act on this information is thus what allowed it to then happen.

So you can stuff your weasly words of ‘regret’ where the sun don’t shine, Director – because the blood of the 17 people who died, and that of all those wounded, is on the hands of your Bureau.

And it’s not like this is the first time the FBI has cocked up a mass shooter investigation.

They were criticised by Congress in 2009 for failing to act on emails between the Fort Hood shooter – that left 13 dead – and terrorist Anwar al-Awaki.

And a white supremacist who killed nine people at a black church in South Carolina in 2015 was only able to purchase his gun because of a breakdown in the FBI’s background check system.

The second massive FBI ball-drop concerns Russia’s meddling in the 2016 US election.

The Russian suspects stand accused of physically entering the US, hiding their true identities, gathering intelligence, engaging online with political and social activists, organising political rallies and even paying American to assist in their sabotage.

The indictment concludes that the St Petersburg-based Internet Research Agency – known as the ‘troll factory’ – had a ‘strategic goal to sow discord in the U.S. political system.’

Attorney General Rod Rosenstein said the indictment contained no allegation that any Americans were ‘knowing participants in this illegal activity’ nor that ‘this charged conduct altered the outcome of the election.’

That doesn’t mean, as President Trump has wrongly suggested, that such allegations may not still emerge in Mueller’s wider investigation.

But it remains a fact that no smoking gun evidence has yet been uncovered to prove any collusion between Trump, or his campaign officials, and Russians to fix the election. 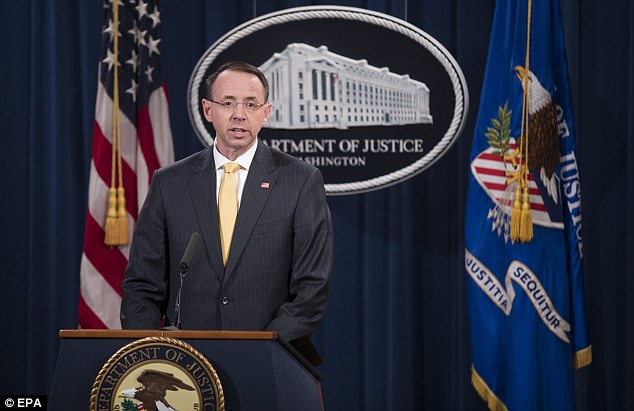 Rod Rosenstein said the indictment contained no allegation that any Americans were ‘knowing participants in this illegal activity’ nor that ‘this charged conduct altered the outcome of the election.’ While no smoking gun has yet been uncovered to prove any collusion between Trump and Russians, what IS now beyond any doubt is that Russians DID try to fix it

What IS now beyond any doubt is that Russians DID try to fix it.

And while it is perfectly legitimate to criticise Trump for not now doing more to punish Russia for this appalling activity – he should – it is surely also perfectly legitimate to ask very serious questions of those tasked with stopping it happening in the first place? The meddling began in 2014, and continued right through to Election Day.

That means it happened on President Obama’s watch, and right under the noses of the FBI.

These are all American companies.

Why did the FBI not do more to investigate and expose this assault on US firms?

Where were they as these Russian cyber spies corrupted the hearts and minds of American voters in an attempt to pervert democracy?

Former FBI Director James Comey, a man who loved the limelight way too much for a job that’s supposed to involve discretion and secrecy, was incredibly busy hunting down Hillary Clinton’s emails. 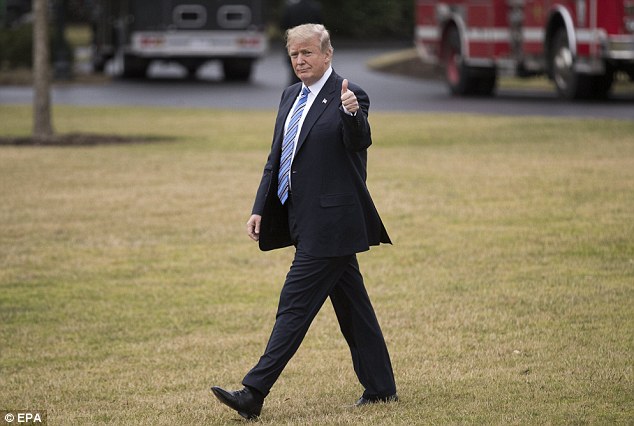 Indeed, his own bombshell decision to reopen that investigation just days before the election probably helped Donald Trump more than any Russian bot.

But why was he not just as energised to root out these Putin-inspired foreign agents flagrantly attacking the US democratic process itself?

The first failure may have affected the result of a US election.

The second failure probably cost the lives of 17 people including 14 children.

So they neither protected the American people nor stayed ahead of the threat.

Little wonder the new nickname for the FBI is the Federal Bureau of Incompetence.