Piers Morgan got into a war of words with Ariana Grande and her mother Joan on Twitter on Wednesday, as they locked horns over his criticism of Little Mix.

The Good Morning Britain presenter, 53, had attacked the British girl group for a nude promo shot, which features the singers posing with insults painted on their skin – an idea which Piers charged they ‘stole’ from country stars the Dixie Chicks.

However, Ariana’s mother was quick to weigh in on the micro-blogging site, as she shot back: ‘Honestly what is wrong with you @piersmorgan? Didn’t your mother ever teach you, if you have nothing nice to say, don’t say it!’ 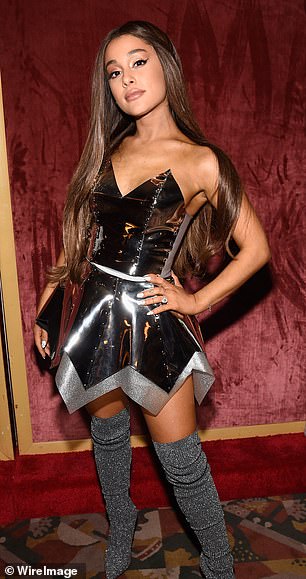 Social media spat: Piers Morgan locked horns with Ariana Grande and her mother Joan on Twitter on Wednesday, as they argued over his criticism of Little Mix

She then referenced the British journalist’s recent criticism of Ellen DeGeneres, who he dubbed’ a ‘hypocrite’ after she marked International Men’s Day by sharing a montage of male celebrities.

Continued Joan: ‘You came for @TheEllenShow yesterday which was disgraceful, she is an angel. @LittleMix today, did you ever hear of paying homage? And..well never mind.’

Undeterred, Piers pressed on, taking a shot at her 25-year-old singer daughter as he responded: ‘Hi Joan, my mother taught me to speak my mind & never be afraid to express honestly held opinion. 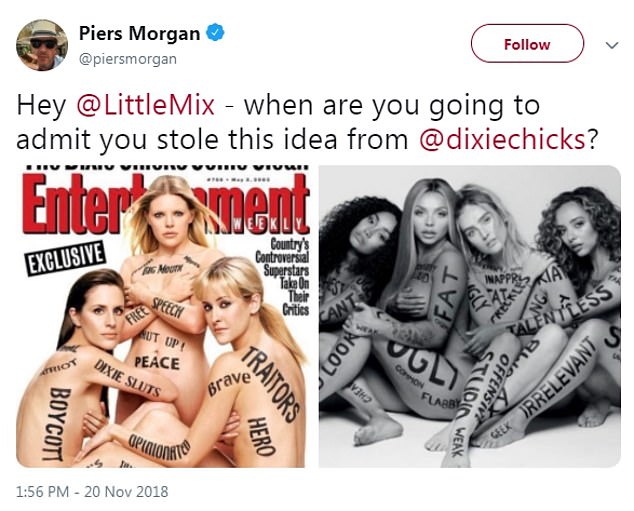 Hmm: Piers Morgan has accused Little Mix of stealing their naked videoshoot idea from the US country band Dixie Chicks

‘Ellen’s a hypocrite – and as for Little Mix, I’d just prefer they use their talent to sell records rather than their nudity. As your own daughter does…!’

Joan then replied, in part: ‘We all know in America that everyone has the right to speak their minds, but trash talk for the sake of denigrating women doing their jobs is at best misogynistic and at worst undignified and ignorant!’

However, Piers said that the stars of Little Mix – Jesy Nelson, Jade Thirlwall, Leigh-Anne Pinnock and Perrie Edwards – were to blame for the feud as they’d previously insulted him during a radio interview.

‘The only ‘trash talk’ came from Little Mix who called me a ‘tw*t’ on the radio,’ Piers told Joan. ‘I suggest you call THEIR mothers to tell them to wash their mouths out with soap.’ 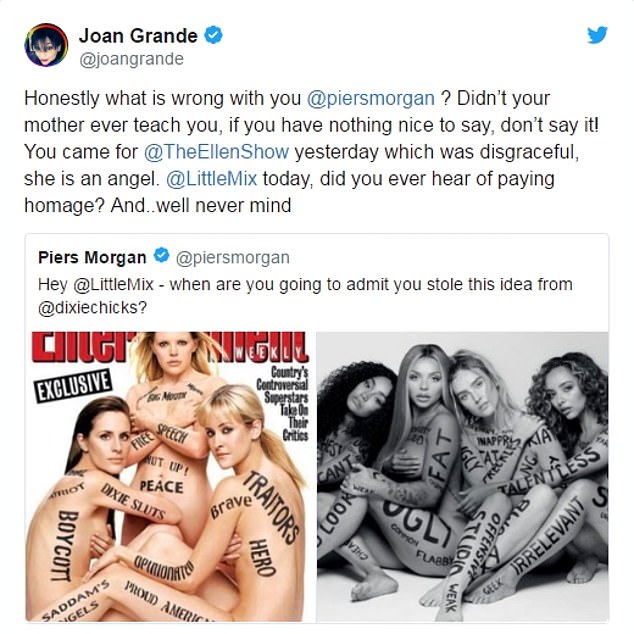 Ariana soon jumped into the row, taking her mother’s side as she also defended the women he’d criticised, including herself.

‘Ellen is an incredible & kind human being,’ the No More Tears Left To Cry singer wrote.’I use my talent AND my sexuality all the time because i choose to.

‘women can be sexual AND talented. naked and dignified. it’s OUR choice. & we will keep fighting til people understand. i say this w all due respect but thank u, next.’

She added: ‘Also @piersmorgan, i look forward to the day you realize there are other ways to go about making yourself relevant than to criticize young, beautiful, successful women for everything they do. 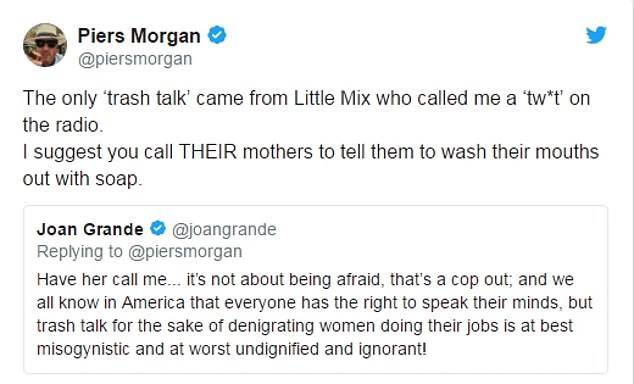 ‘i think that’ll be a beautiful thing for you and your career or what’s left of it.’

Continuing the spat, Piers replied: ‘Hi Ariana! How lovely to hear from you so soon after your mother. Of course, women can do what they like – but if they/you use nudity to sell records to impressionable young female fans, I’ll continue to call them/you out on it. All due respect, but thank YOU. Next…’

‘For the record, I criticise/praise everyone – male, female, gender-fluid. Indeed, I’ve written columns praising AND criticising you, and you deserved both.’ 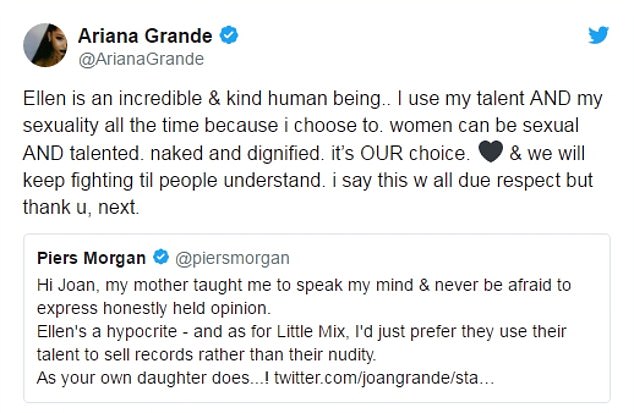 Despite the tense exchange, Piers thanked Ariana for their spat making him a trending topic on Twotter, before inviting the star onto Good Morning Britain.

He wrote: ‘Since I’ve got your attention @ArianaGrande – want to come on @GMB on Monday to settle this like mano-to-womano? We can bring our mothers too, if you like.’

The fallout started when Piers accused Little Mix of stealing their naked videoshoot idea from the US country band Dixie Chicks.

The X Factor winners had stripped nude to promote their new single Strip, with insults painted on their skin in the tasteful black-and-white shot. 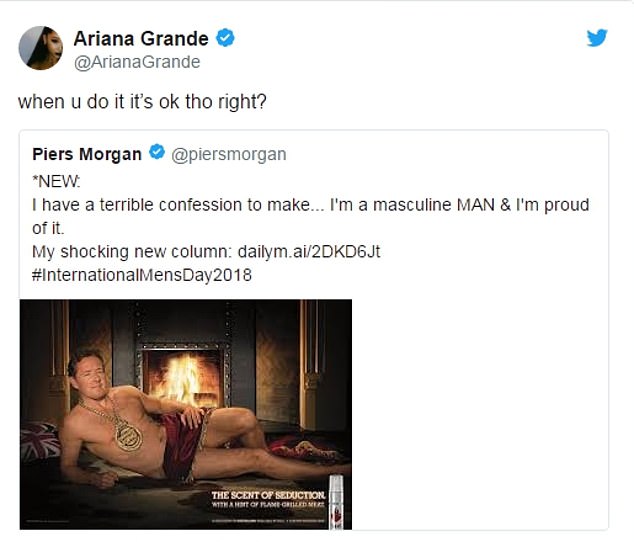 But Piers upped the ante of his feud with the girl group as he tweeted a photo of of the Dixie Chicks in a similar naked shoot on the cover of Entertainment Weekly back in 2003.

He wrote: ‘Hey @LittleMix – when are you going to admit you stole this idea from @dixiechicks?’

The former X Factor winners are championing body positivity with Strip’s powerful message, encouraging people to embrace their own skin and ignore what others might say. Little Mix’s representative has declined to comment.

It comes after Piers accused Little Mix of using sex to sell albums – prompting Jesy Nelson to call him a ‘silly t**t’.

And Piers has now fired back at the pop princess in typical fashion, demanding an apology from the outspoken Essex singer during his GMB appearance on Tuesday. 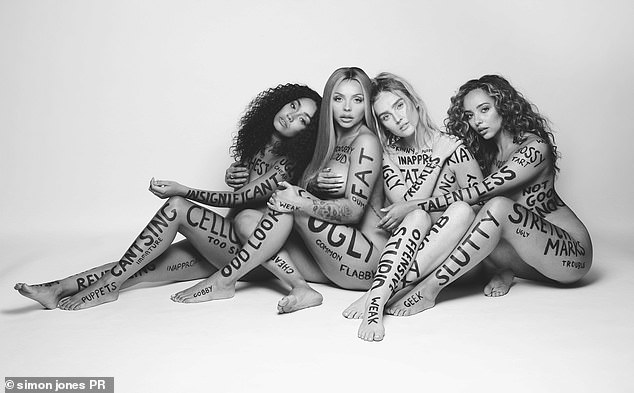 Making a statement: Little Mix had posed naked with words they’d been called by trolls written on their skin (pictured), which they are using to promote body confidence in their fans 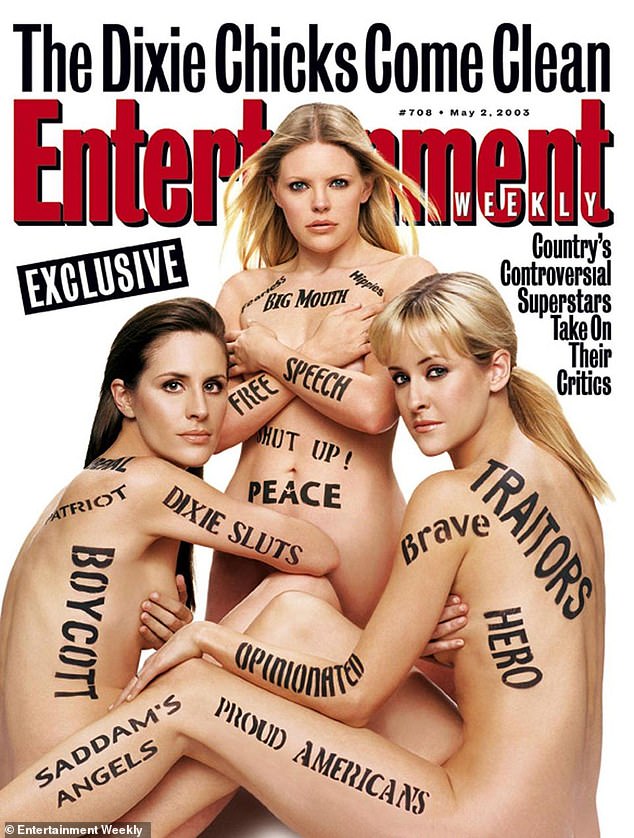 Done before? But Piers, 53, upped the ante of his feud with the girl group as he tweeted a photo of of the Dixie Chicks in a similar naked shoot on the cover of Entertainment Weekly back in 2003

The presenter took umbrage to Jesy’s comments during an interview with BBC radio host Nick Grimshaw, playing the segment aloud for GMB viewers to hear.

Discussing whether the Little Mix girls were offended by Piers’ negative reaction to their nude image, Jesy said: ‘Of course not, he’s a silly t**t.’

‘Apologies for offensive language on BBC’, she laughed, with her bandmate Leigh-Anne Pinnock chiming in, ‘The word she was looking for was idiot’. 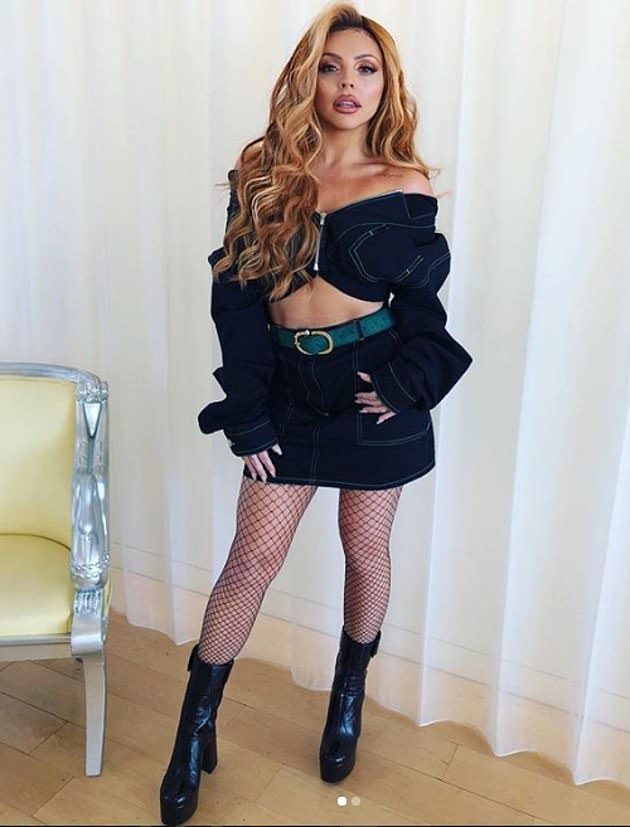 The feud continues: It comes after he hit back at Little Mix’s Jesy Nelson after she called him a ‘silly t**t’, demanding an apology from the singer during his Good Morning Britain appearance on Tuesday 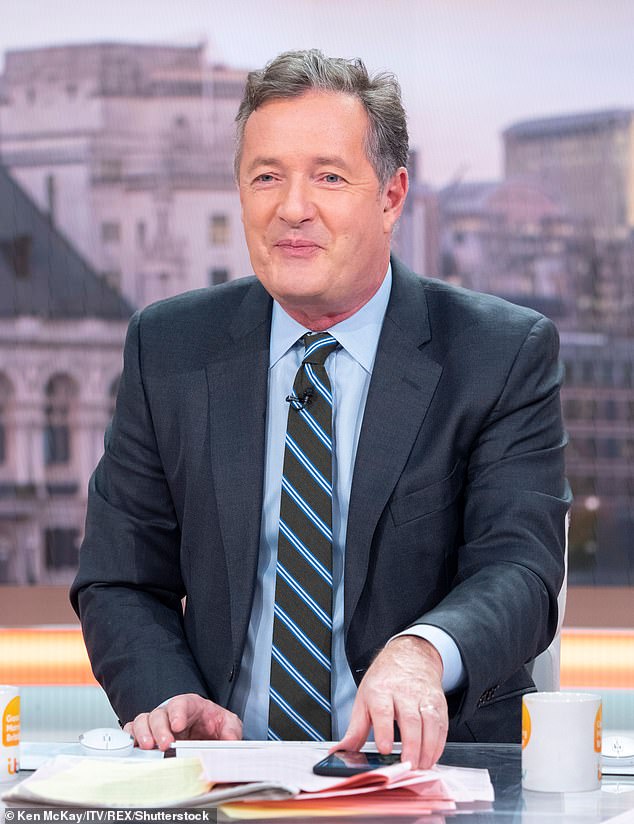 Unimpressed: The presenter, 53, took umbrage to Jesy’s comments during an interview with BBC radio host Nick Grimshaw, playing the segment aloud for GMB viewers to hear

Referring to Jesy’s slur on Monday morning’s edition of GMB, Piers declared: ‘Oh Jesy you let yourself down, love. When you’re doing a campaign against doing rude words, it’s probably better not to use rude words on the radio about me.’

He added: ‘I apologise to anyone who is offended by the language Little Mix used about me.

‘Little Mix, I think you need to make a public apology during your campaign to root out bad language from public discourse.

‘Grimmers apologised to me on their behalf, I didn’t hear Jesy apologise. Our viewers are perfectly [entitled] to know the scale of bad language that Little Mix used.’ 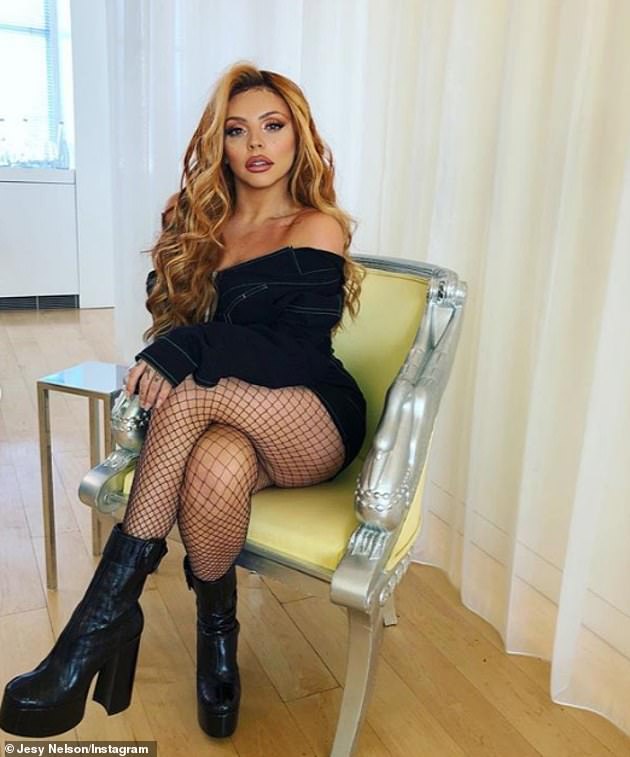 Hitting back: Referring to Jesy’s slur on Monday morning’s edition of GMB, Piers declared, ‘Oh Jesy you let yourself down, love. When you’re doing a campaign against doing rude words, it’s probably better not to use rude words on the radio about me’ 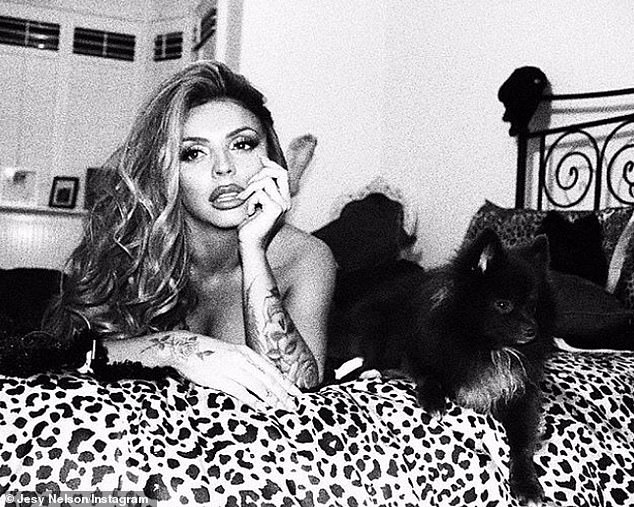 He continued: ‘Grimmers apologised to me on their behalf, I didn’t hear Jesy apologise. Our viewers are perfectly [entitled] to know the scale of bad language that Little Mix used’ 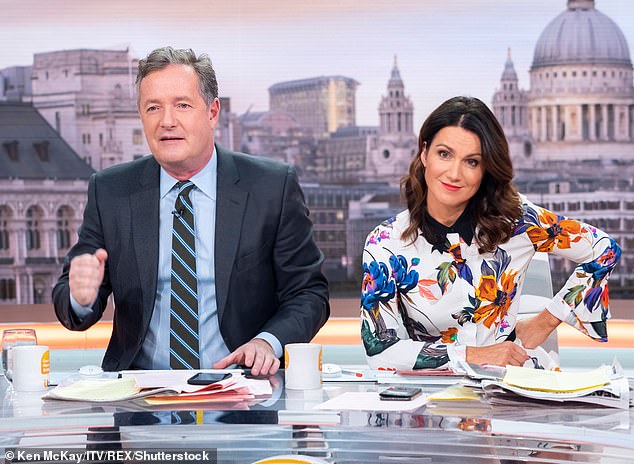 What’ll it be, girls? Piers also vowed to strip off himself should the girls ever agree to come into the studio for an interview

Piers also vowed to strip off himself should the girls ever agree to come into the studio for an interview.

This comes after Pier insisted Little Mix’s shoot to promote their new single Strip is not an empowering statement – but a ‘cynical attempt to sell records’.

The TV host also edited his own face onto a muscular body which had been daubed with some of the insults that have been directed at him, including ‘arrogant’ and ‘patronising’.

Piers argued that stripping off is not empowering and is instead the girl band’s ‘cynical attempt’ to promote the track. 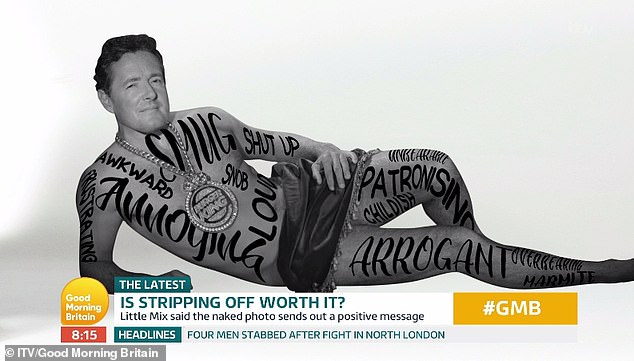 Owning it: Piers recreated Little Mix’s Strip photoshoot by editing his face onto a muscular body that was adorned with insults he’d been called

The picture was later followed by a video in which Little Mix and a group of women all danced in their underwear, with the clip aiming to encourage women to accept their ‘flaws’ and be happy with the bodies they have.

Piers argued that female celebrities are using nudity to make money but are then claiming their nakedness is female empowerment.

He produced his own mocked up version of the image in a light-hearted attempt to empower men with his own naked body.

He explained: ‘I have an equally empowering image that I want to share with the nation. Very empowering. 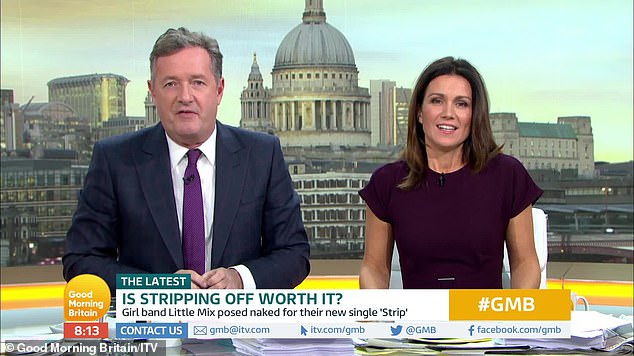 Debate: Piers argued that posing nude isn’t about being empowering but is the girl band’s ‘cynical attempt to sell records’.

‘I think every man in Britain is now going; a) I want a body like that, and b) I should adorn myself in offensive words, although I find most of those words complimentary.’

He then said that celebrities that pose nude and claim to be feminists are ‘conning’ their fans.

Piers continued: ‘Why don’t we stop pretending that getting your kit off is feminist empowerment? 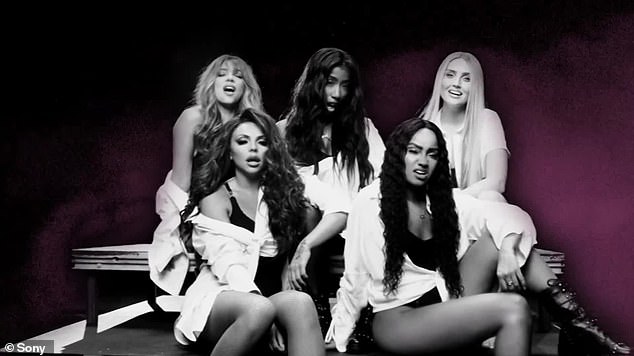 Confident: In the video the band (pictured with rapper Kamille) pose in their underwear while singing about being happy with their bodies

‘Kim Kardashian does this, Emily Ratajkowsi, all of them. They’re all making millions and billions of dollars out of conning the world that getting their kit off is somehow empowering.’

To debate the issue GMB welcomed on Kerry Katona, who praised Little Mix for ‘raising awareness’ about body confidence issues.

She said: ‘I have four young girls, I think it’s amazing what they’ve done. Since social media’s been around there’s so much trolling, there’s self-harming and the suicide rate has gone up massively.

‘They have a huge platform of young girls out there who are going to watch this video and go ”It’s ok to be ok with my body.” 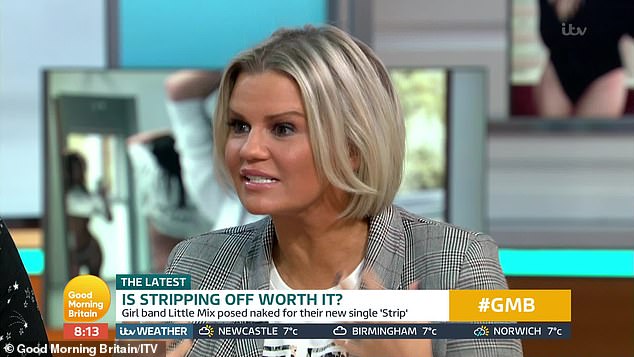