PIERS MORGAN: How can Prince Harry sell his soul to Netflix sharks?

I’ve been looking forward to Season 4 of The Crown with almost as much feverish anticipation as I’ve been awaiting a covid vaccine.

So, when Netflix dropped the entire 10-part thriller – there can be no other word for it – yesterday, I promptly binged-watched it all like a ravenous lion gorging on a freshly-slain antelope.

To say I wasn’t disappointed is the understatement of the millennium.

Peter Morgan’s gripping new instalment of his epic drama has now reached the timeline of the Royal Family’s history with which I am most personally familiar because I remember it all unfurling in real time and covering much of it as a newspaper editor.

It was without a doubt the most scandalous, tumultuous and turbulent period of the modern Monarchy’s existence, centring around the explosive marriage of Princess Diana and Prince Charles.

And Morgan regales it all in devastating, graphic, painful detail – some of it true, and some of it, as he admits, invented for dramatical purposes.

I won’t spoilt it for other viewers by repeating those details now.

But what I can say is that it portrays both Diana and Charles in an incredibly unflattering light.

She is depicted as a delusional, needy, childish, embarrassingly naïve, petulant and slightly bonkers bulimic, and he as a sour, resentful, cruel, nasty, poisonous, whiny, monstrous and ultimately loathsome piece of work.

Meanwhile, the Queen comes across as a cold, heartless and inhuman woman incapable of showing any empathy to the couple as their marriage disintegrate

I happen to know this last slur is grotesquely unfair to Her Majesty because Diana told me herself that the Queen had always been very supportive towards her and was ‘a great listener’.

I also know from my personal experiences of them, and speaking to those who knew them very well, that both Diana and Charles are frequently and at times savagely mischaracterised in this brutal takedown of their relationship.

But from now on it will the Netflix version that people remember. Little wonder the Royals are said to be incandescent over it.

The Duke and Duchess of Sussex are pictured in London on January 7. Prince Harry is literally accepting money made from humiliating his own family, especially his own mother

Prince William, in particular, is reported to be enraged at the way his parents are being ‘exploited’ and ‘presented in a false, simplistic way to make money.’

A royal source close to him told the papers: ‘In this case, it’s dragging up things that happened during very difficult times 25 or 30 years ago without a thought for anyone’s feelings. That isn’t right or fair, particularly when so many of the things being depicted don’t represent the truth.’

I’d share that sentiment if I were William and this was my family being treated this way.

What is truly staggering is that his brother Harry doesn’t seem to share it.

In fact, far from being outraged by Netflix making a fortune by rubbishing the royals like this, his response has been to join his wife Meghan in striking their own massive multi-million-dollar deal with them.

By doing so, Harry is literally accepting money made from humiliating his own family, especially his own mother whose experience with the press he constantly holds up to demand greater deference for his wife Meghan.

And now, as a storm of controversy grows over this appallingly hypocritical decision, he’s shut his eyes, stuck his hands over his ears, and buried himself into the sands of Santa Barbara in the desperate hope nobody will notice the astoundingly two-faced nature of his behaviour. 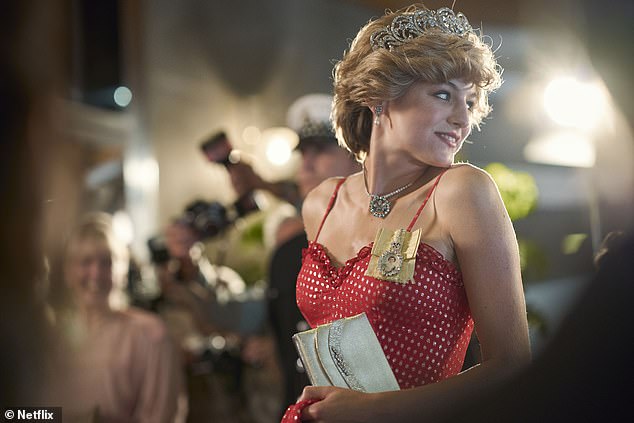 Corrin as Diana in a scene from The Crown. The show portrays both Diana and Charles in an incredibly unflattering light

How could we not?

Netflix has been understandably flogging the guts out of this new season, acutely aware that it’s the juiciest and most potentially lucrative of the whole Crown series so far due to the contemporaneousness of the material.

Now, before I myself get accused of hypocrisy, let me say that as a former tabloid newspaper editor, I loved this new season.

And I don’t believe dramas should have to stick rigidly to facts to tell a story.

This is not intended to be a historically accurate documentary, but a hyped-up version of events designed to enthral viewers.

I was utterly enthralled, so it worked.

But history it ain’t.

Like previous seasons, the production values are fantastic, the acting superb and the storytelling by my no-relation namesake Morgan absolutely riveting.

Nor do I blame Netflix for making a highly entertaining drama series about a publicly funded group of very privileged people.

But then I’m not a member of the Royal Family and these aren’t my grandparents, parents, siblings, aunts, uncles and cousins that are being exposed to such titillating Tinseltown treatment.

If I were Charles, or William, or the Queen, or Prince Philip, I’d be as disgusted by it all as we’re told they are.

So why isn’t Prince Harry?

He can’t pretend to have been caught by surprise.

The first three seasons of The Crown portrayed his grandmother The Queen as a cold, dull intimidating fish, his grandfather as an acid-tongued adulterer, his great Aunt Margaret as a crazy lush, his great-grandmother the Queen Mother as a dictatorial harridan, and so on.

He therefore knew exactly how Netflix had rubbished his family before he ever signed his deal.

The hypocrisy of his money-grabbing gold rush to Netflix Towers is truly jaw-dropping when you consider how passionately he’s always defended his family’s privacy and railed against ‘tabloid intrusion’ against both his mother and now his wife, whom he openly compares to Diana.

Soon after it was revealed that Harry was dating Meghan, he issued a furious statement condemning the media for their intrusive behaviour.

‘It is not right, a few months into a relationship with him, that Ms Markle should be subjected to such a storm,’ his spokesman raged. ‘He knows commentators will say this is ‘the price she has to pay’ and that ‘this is all part of the game’. He strongly disagrees. This is not a game – it is her life and his. He has asked for this statement to be issued in the hopes that those in the press who have been driving this story can pause and reflect before any further damage is done.’ 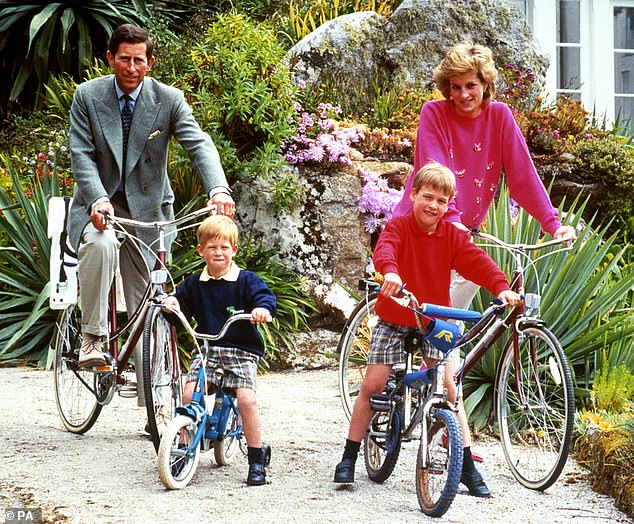 Fine words, yet how hollow they sound now that he’s so enthusiastically jumped into bed with the same company that’s engaged in a cynically commercial ongoing exploitation of his family.

And how ironic that one Palace source described this season of The Crown as ‘trolling on a Hollywood budget’, given that Meghan and Harry recently bemoaned trolls on social media for spreading malicious unsubstantiated gossip that made their lives hell.

Perhaps the real reason behind Harry’s grubby Netflix deal is that it offers him a protective blanket against any future season of The Crown focusing on more awkward recent royal events like him ruthlessly ditching his family and country to go and live in a Californian mansion and preach to us all about kindness and equality?

Regardless, his decision to sell his soul to the very company currently trading off his family’s most intimate secrets and doing so in such a lurid, sensationalised, hurtful and fact-devoid way is a stinking betrayal by the self-proclaimed Prince of Privacy.

If Harry had any integrity left, he’d tear up his Netflix deal right now and apologise to his family for colluding with the enemy in such a distasteful manner.

We saw from the way he hired a photographer to take nauseating self-promotional pictures of him and Meghan at a military graveside last week, to avenge the royals for refusing to let him have a wreath placed on Remembrance Sunday in absentia, that he’s sadly lost all sense of moral decency in his dash to ‘freedom’ and lust for Kardashian-style American celebrity status.

Instead, Harry will keep the Netflix millions and by doing so, he is giving his own tacit royal seal of approval to the company exploiting and trashing his family.