PIERS MORGAN: Jussie Smollett lynched the truth and betrayed every black and gay person in America

‘I AM telling the truth!’ Jussie Smollett once tweeted, with the hashtag #TheMostCommonLies.

Today, Smollett is revealed to be the most hideous, reprehensible, disgusting, snivelling little liar in America.

How else to adequately describe a prominent black, gay celebrity actor who police say staged a racist, homophobic attack on HIMSELF?

A man who would pay two friends to pretend to jump him in the street at 2am in Chicago, scream ugly insults about his skin colour and sexuality, put a noose around his neck, and pour bleach on him?

A man who would claim his ‘attackers’ were red-capped supporters of President Trump, and shouted ‘This MAGA country’, referring to Trump’s campaign slogan ‘Making America Great Again?’

A man who would then go on national television to give an interview to ABC’s Robin Roberts in which he tearfully doubled down on every detail?

A man who soaked up valuable police time as 20 detectives were assigned to investigate what was billed as a despicable hate crime?

A man who, even as his story unravelled faster than Pinocchio’s nose grew the more lies he told, continued to protest his total innocence, continued to play the victim?

A man who did all this because according to Chicago Police, he wanted to jack up his salary on Empire?

No, I can’t think of any better way to describe a pathetic excuse for a man like Jussie Smollet, though I might add the words ‘sickening, shameful disgrace’ to the mix.

Everything about this story seemed implausible from the moment it first broke.

It’s why I very unusually held my Twitter tongue as so many others raced to assume Smollett’s story was true.

We were supposed to believe that these two vicious Trump-hating racist homophobes just happened to be wandering the freezing cold streets of Chicago at 2am, armed with bleach and a noose, and lucked out by finding Smollett walking home from Subway.

They then savagely attacked him, but apparently not so badly that Smollett wasn’t able to remember to take his sandwich home.

It’s usually the little details like that bit that trip up humongous liars.

In Smollett’s case, it was every detail.

His appalling crassness and duplicity was only matched by his spectacular stupidity.

For a start, who hires two black men to commit a fake racist attack on a black man?

At least use white guys, Jussie! Come on! 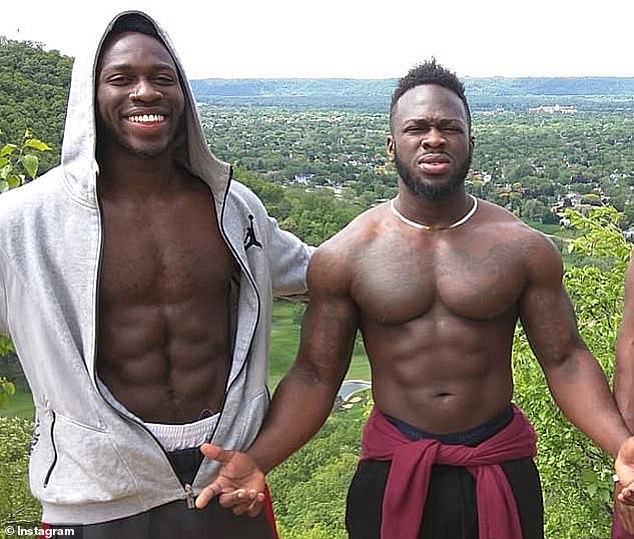 His stupidity was spectacular. Who hires two black men to commit a fake racist attack on a black man? At least use white guys, Jussie! Come on!

I suspected Smollett was lying the moment it emerged he had withheld his phone from the police.

No genuinely innocent victim would do that unless there was evidence on that phone that would contradict his story.

When Smollett finally gave up his phone records, they were heavily redacted – thus presumably removing all the stuff that would incriminate him.

But it was his appearance on Good Morning America that cemented my doubts.

Watch it back now he’s been arrested, and you’ll laugh out loud at the obvious acting.

‘I see the attacker, masked,’ he said, his face grimacing at the memory, tears welling in his eyes, ‘and he said, ‘This MAGA country (N-word). Punches me right in the face. So I punched his (expletive) back and then we started tussling.. by the stairs, fighting, fighting, fighting…’ 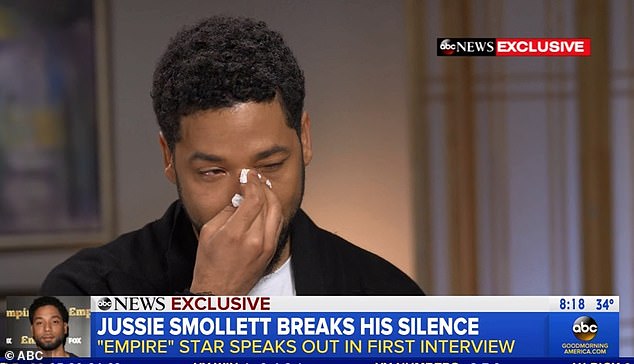 His appearance on Good Morning America cemented my doubts. Watch it back now he’s been arrested, and you’ll laugh out loud at the obvious acting

So Smollett wasn’t just portraying himself as a victim now, he was a BRAVE, FEARLESS hero too!

This ‘attack’ was ticking every box for maximum virtue-signalling effect.

It’s the performance of Smollett’s career, playing the role he has craved for years: that of a persecuted black gay man ‘lynched’ by supporters of a man he despises more than any other human being: Donald Trump.

A casual look at Smollett’s Twitter feed reveals someone suffering from advanced Trump Derangement Syndrome, the condition that afflicts so many liberal celebrities these days.

He doesn’t just hate Trump; he loathes him with a visceral, terrible rage that has clearly addled his brain. 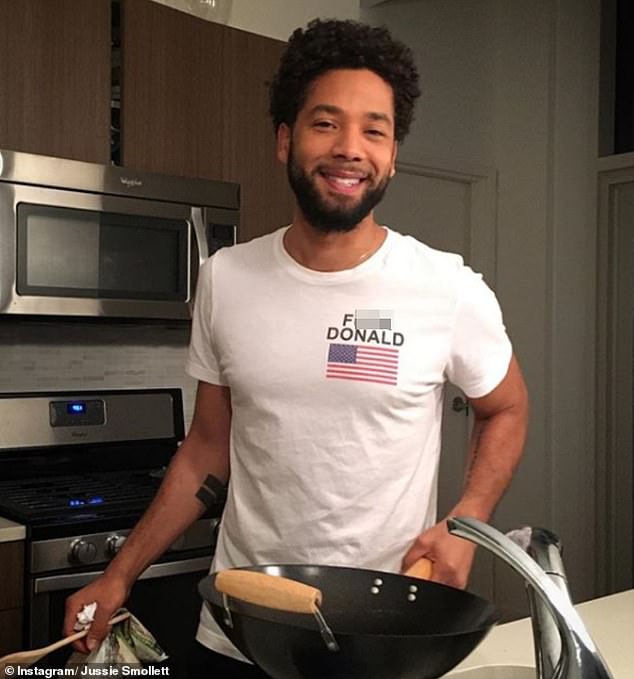 A casual look at Smollett’s social media shows he doesn’t just hate Trump; he loathes him with a visceral, terrible rage that has clearly addled his brain

And the more he ranted about the President, the more ‘likes’ and ‘retweets’ he got from the PC-crazed ‘woke’ brigade who share Smollett’s demented attitude to all things Trump.

When Robin Roberts asked him for the motivation for the attack, Smollett said he guessed it was his vehement opposition to Trump. ‘I can only go off the their words,’ he said softly, revealing he gets ‘threatened all the time’ on social media.

He added that he is ‘sometimes maybe too outspoken…but it’s who I am.’

Smollett also revealed that he received a hate letter a week before the assault that he believed was directly linked to it:

‘On the letter, it had a stick figure hanging from a tree with a gun pointing to it with the words, “Smollett, Jussie, you will die.”’ He added that the return address was “MAGA”. 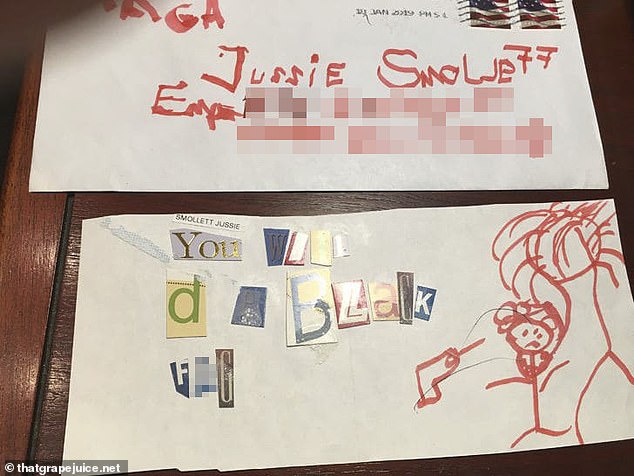 Now we know Smollett sent himself that letter, to the Empire studios, and was apparently disappointed it didn’t get more reaction.

He wanted the attention, the headlines, the bright media light to shine on his head.

He wanted to be the poster boy black gay Trump victim.

So when the letter didn’t do the trick, Smollett decided to up the ante with his staged attack, using two Nigerian friends to do it.

‘That’ll do it,’ he presumably thought.

And for a while, it did.

He became an instant superstar victim, his face splashed across every newspaper and TV news bulletin in the country, and around the world.

Jussie Smollet was a global phenomenon – the gay, black actor who got lynched by Trump fans.

Nobody dared to doubt him.

Democrat presidential candidates fell over themselves trying to milk his horror story for their own political gain.

‘Jussie Smollett is one of the kindest, most gentle human beings I know. I am praying for his recovery.’ said Kamala Harris. ‘This was an attempted modern day lynching.’

Cory Booker agreed, using suspiciously similar language: ‘The vicious attack on actor Jussie Smollett was an attempted modern-day lynching. I’m glad he’s safe. To those in Congress who don’t feel the urgency to pass our Anti-lynching bill designating lynching as a federal hate crime, I urge you to pay attention.’ 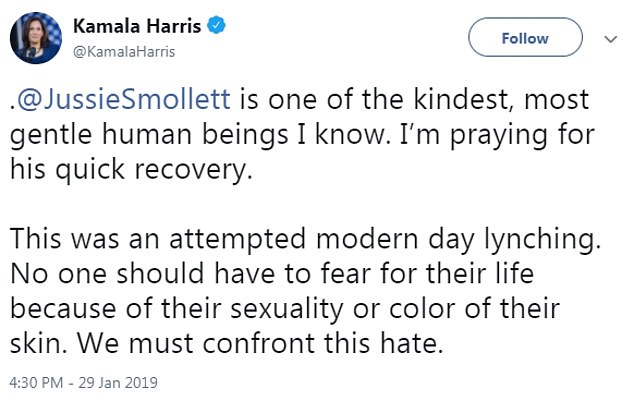 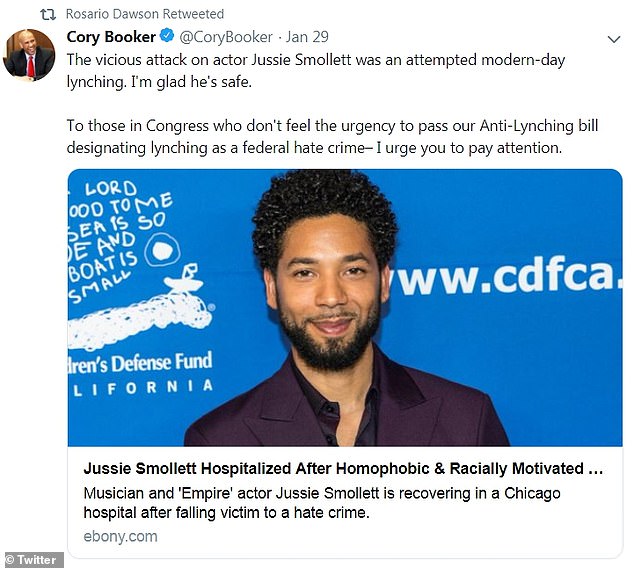 Hmmm, if only Mr Booker had paid more attention himself, he might have smelled the gigantic fork-tongued rat lurking at the heart of Smollett’s bullsh*t story.

Rising left-wing star Alexandria Ocasio-Cortez was enraged anyone was even framing the attack as an alleged crime: ‘This attack was not ‘possibly homophobic’, she seethed, ‘it was a racist and homophobic attack.’

But it wasn’t, was it Alexandria? As so often, you let your fast, furious mouth run away with you to the detriment of cold, hard, facts.

Smollett’s fellow liberal celebrities, led as always by the likes of professional Trump-basher Alyssa Milano, were even more emphatic, queuing up to express their outrage, offer their poor friend their love and support, and bemoan what’s happened to their country under Devil Donald.

Damningly, many in the mainstream media – as so often since Trump became President – also lost their minds, abandoning any pretense at journalistic objectivity or qualification and just running with this perfect anti-Trump story on the say-so of an unhinged actor trying to pump up his brand. 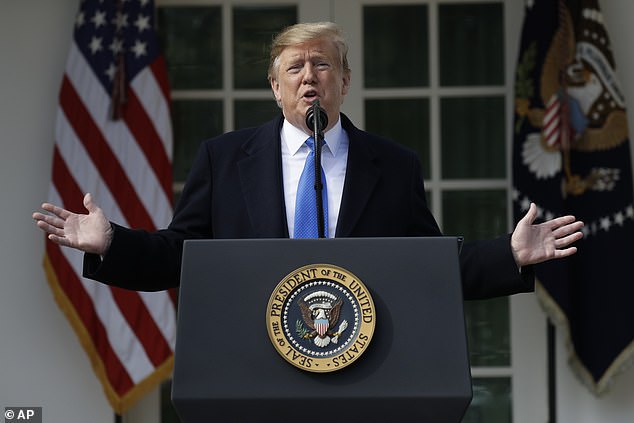 Trump hating celebrities and many in the mainstream media lost their minds, abandoning any pretense at objectivity, so happy with such an anti-Trump story

Now, following his dramatic arrest for making a false police report, they’ve all gone very, very quiet as the real horror of this Jussie Smollett story sinks in: he made it all up.

And by doing so, Smollett hasn’t just betrayed his famous supporters and made them look stupid.

He has betrayed every black and gay person in America, especially those who may become genuine victims of racial or homophobic attacks in the future, and will now be viewed with more suspicion.

He’s also wasted huge amounts of Chicago police man-hours when they should have been out working on real crimes.

And by making this all about Trump, Smollett has betrayed his country too by tipping rocket fuel onto the already bitterly divided and polarised politically partisan state it currently exists in.

The ultimate irony is that Jussie Smollett perpetrated this sick hoax to get a pay rise, and will now pay for it with his career, reputation and quite possibly his liberty.

He deserves no mercy and no sympathy. Just our fury.

In the end, the only lynching that went on here was to the truth.