As part of the ongoing drive towards environmentally friendly fashion, Fonda, 82, opted to accessorise her recycled red gown with ‘ethically sourced’ gold and diamonds while attending the star-studded event at Hollywood’s Dolby Theatre.

Dripping in expensive trinkets, the actress shared a glamorous social media selfie from the Academy Awards ceremony on Monday, writing: ‘At Oscars wearing Pomellato jewellery because it only uses responsible, ethically harvested gold and sustainable diamonds.’

Here we go: Piers Morgan took aim at Jane Fonda on Tuesday morning after the screen veteran shared a glamorous selfie from the Academy Awards and  revealed she wore sustainable gold jewellery to the event as part of her drive towards sustainable fashion

But the post prompted a mixed response from anti-woke followers, among them prolific Tweeter Morgan, who playfully mocked the actress’s perceived virtue signalling.

Retweeting her selfie, he wrote: ‘The sacrifice is humbling!’

Evidently in agreement with the presenter another added: ‘Sorry Jane. You can protest all you want. What was two hundred million dollars? You’re just a one percenter. Let’s be honest. Wearing gold and diamonds It’s all about ego.’

While a third joked: ‘I’m the same. I only drink water ethically sourced from a sustainable cloud. I’m terribly dehydrated most of the time.’ 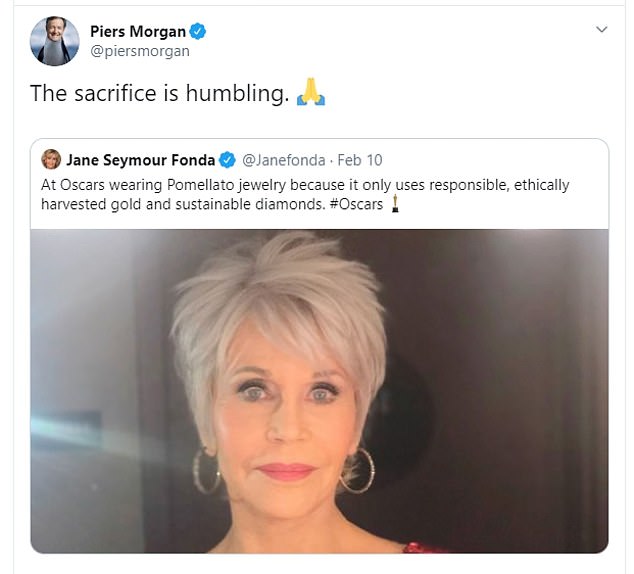 Banter: Prolific Tweeter Morgan playfully mocked the actress’s perceived virtue signalling by reposting her selfie with the caption ‘The sacrifice is humbling’

Twice as nice: Fonda made a statement at Sunday evening’s 92nd Academy Awards at the Dolby Theatre, shunning new couture in favour of a recycled dress from 2014 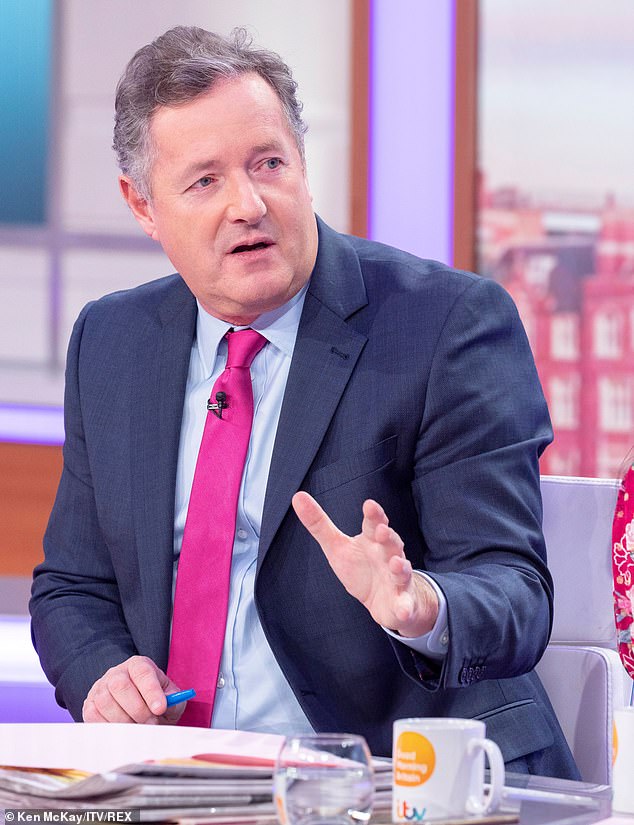 He’s got form: Good Morning Britain presenter Morgan is no stranger to a celebrity Twitter spat

Hitting out at the star, another carped:  ‘What goes on in the mind of these people who have not stepped out of their echo chamber their entire life, is fascinating. They honestly believe that wearing the right type of jewelry makes them sound virtuous. Unbelievable.’

However others stood behind Fonda, who also wore the famous ‘climate change’ coat in which she has been arrested four times at the event.

Taking to Twitter, one fan wrote: ‘Thank you for bringing the red coat on stage. We see you. We care about climate change and sustainability in fashion. We also appreciate you and how you are using your platform. You are gorgeous and incredible.’

While another congratulated the actress, writing: ‘Love you Jane, just beautiful! Appreciate what you are doing for our environment!’

Fonda combed her closet for an incredible Ellie Saab gown she first wore in 2014 to the Grace of Monaco premiere in Cannes ahead of Sunday evening’s event. 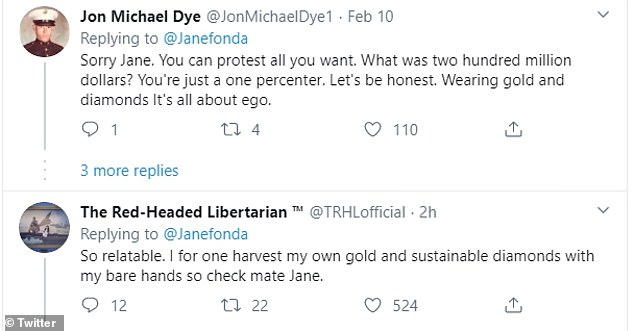 Here we go: The post prompted a mixed response from fans, with many slamming her perceived virtue signalling

Her decision to recycle the gown she wore in Cannes six years ago was in part to bring home her stance on carbon footprints and ecological responsibility, as she has previously claimed she will never again buy new clothes.

The 9 To 5 actress also carried her now-famous red climate change coat, saying last November that it would be the ‘last article of clothing I’ll ever buy.’

Taking to the stage to present the evening’s nine Best Picture nominees, she said: ‘You see this coat? I needed something red and I went out and found this coat on sale…

Support: However others stood behind Fonda, who recently admitted she will stop buying clothes as part of her push towards helping improve the current environmental crisis 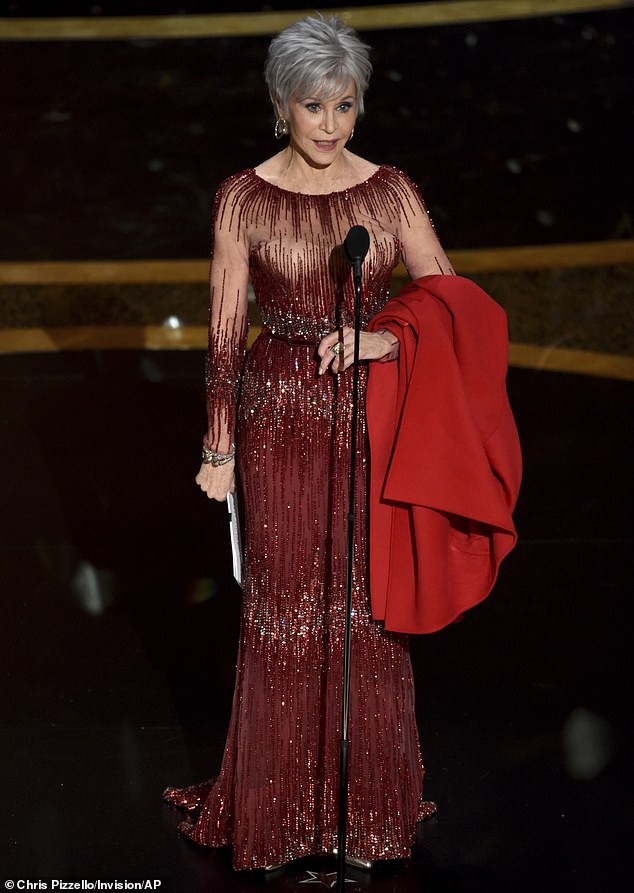 Here come the girls! The Grace And Frankie actress complimented her recycled dress with her famous red coat, in which she been arrested in four times

‘This is the last article of clothing that I will ever buy. When I talk to people and say, “We don’t really need to keep shopping…

‘”We shouldn’t look to shopping for our identity. We don’t need more stuff,” I have to walk the talk. So I’m not buying any more clothes’.

‘Nothing is more important than raising awareness, right?’

She went on to present the Best Picture Oscar to surprise winner Parasite, which made history as the first-ever foreign language film to win in the category. 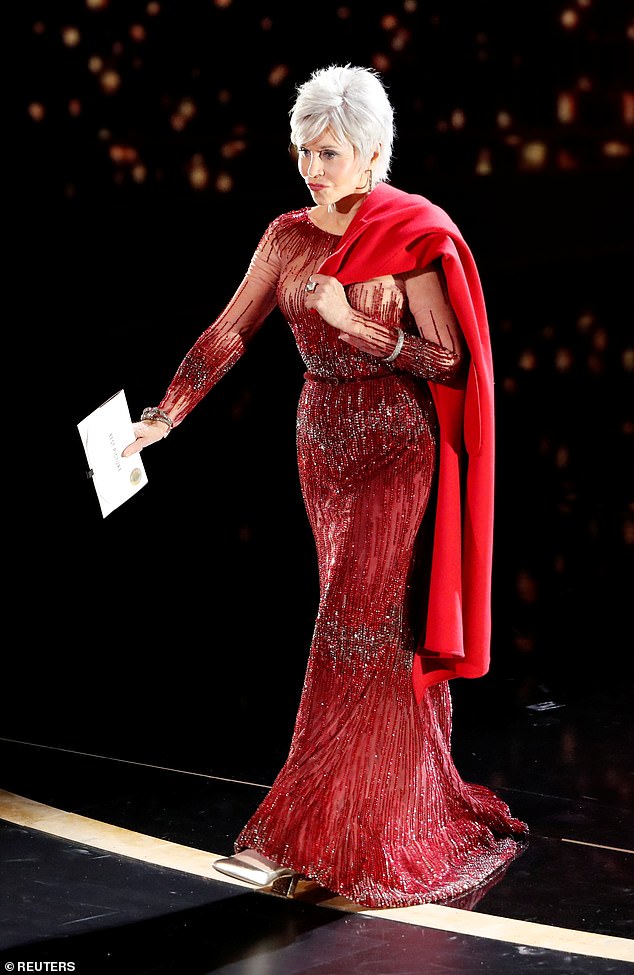 A coating: After Jane’s recent arrest during a climate change march, she told crowds, ‘You see this coat? I needed something red and I went out and found this coat on sale’