Next week is the first anniversary of Donald Trump’s astonishing US election victory.

To ‘celebrate’, thousands of Trump-hating liberals in cities like Boston, New York and Philadelphia are planning a day of protest in which they will go outside, stare upwards and shout their little heads off in rage.

The planned event is actually titled on Facebook: ‘Scream helplessly at the sky on the anniversary of the election’.

Organizer Johanna Schulman told Newsweek: ‘This administration has attacked everything about what it means to be an American. Who wouldn’t feel helpless every day?’

To ‘celebrate’ the first anniversary of Trump’s election, thousands of his haters are planning a day of protest in which they will go outside, stare upwards and shout in rage. The event started in Boston, though quickly spread to other cities including Philadelphia (event page pictured), New York and Austin

There are tens of millions of Americans right now who don’t feel helpless at all. In fact, they’ve never felt happier that they’ve finally got a guy in the White House who THEY believe stands up for THEM.

They don’t share YOUR view of what it means to be an American.

That’s why he was elected President, and that’s why I am beginning to think he will be comfortably re-elected in 2020.

For those who think I’ve gone completely mad, here is what I told British GQ magazine in September, 2015, when they asked me: Who will win the US election?

‘I think Donald Trump will win the Republican nomination,’ I answered. ‘The Democrats will only stand a chance of beating him if they ditch Hillary Clinton, who is now a busted flush, and go with Joe Biden, possibly with Elizabeth Warren as his running mate.’ 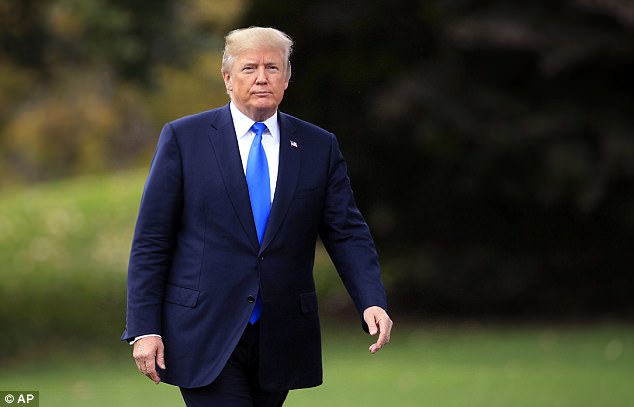 There are tens of millions of Americans right now who don’t feel helpless and in fact feel like the guy in the White House stands up for THEM. In September, 2015, I said ‘I think Donald Trump will win the Republican nomination,’ and below are ten reasons I think he may win again

So, putting my Nostradamus hat on again, here are 10 reasons why I think Trump can pull it off again:

1) He’s the most resilient, uncompromising man in America. Love him or loathe him, Trump hasn’t changed or pivoted one iota from the candidate who ran for office. He is both absurdly thin-skinned AND absurdly thick-skinned – incapable of ignoring any slight, however small, but also showing quite extraordinary strength of character in repelling what even Jimmy Carter just called the most frenzied media attack on a serving president in US history. Yes, Trump’s an inveterate bulls**tter, the by-product of life as a shameless salesman, but to date he hasn’t lied us into an illegal war like one of his most recent critics George W. Bush did in Iraq – so political fibbing is all relative.

2) Trump’s enemies are bailing out from the fight like conscientious objectors in the war. Yesterday, two Senators, Bob Corker and Jeff Flake made grandiose media-grabbing attacks on the President, effectively branding him a lying useless goon. Both are standing down, and in (Snow) Flake’s case, he’s only doing so because he knows he’s going to get an absolute drubbing in the next election. This, remember, is a guy so principled that he wrote to a Sandy Hook relative saying he agreed with her about introducing background checks on gun sales, then voted AGAINST it just months later. That was a major reason why his poll numbers collapsed. So spare me the sanctimony now, Senator. You’re a fraud.

3) Hollywood’s liberal elite, Trump’s most vociferous, influential and vicious opponents, have exposed themselves to be a bunch of shocking hypocrites whose high moral and ethical plinth now lies in a pile of ruins.

The Weinstein scandal was just the tip of the unedifying iceberg. Today we learned that Woody Allen, a man who ran off and married one adoptive daughter and was accused of sexually abusing another adoptive daughter when she was just seven, is currently making a movie about a pedophile who preys on a 15-year-old girl. Meanwhile, Trump’s most indignant Hollywood opponents like Meryl Streep continue to celebrate convicted fugitive child rapist Roman Polanski. Middle America is watching all this and thinking: ‘Don’t you lot DARE lecture us about anything ever again.’

4) The Democrats don’t have anyone yet who can run against Trump and actually beat him. Say what you like about the man but he’s proven himself to be a formidably fierce political campaigner who wipes away opponents with the flick of a mocking ‘Low Energy Jeb’ nickname switch. My preferred choice last time, Joe Biden, will be 78 by 2020 – surely, sadly, too old by then to mount a winning challenge? If not Joe, then who? The clock is ticking. 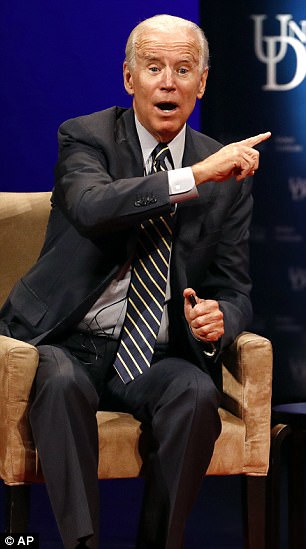 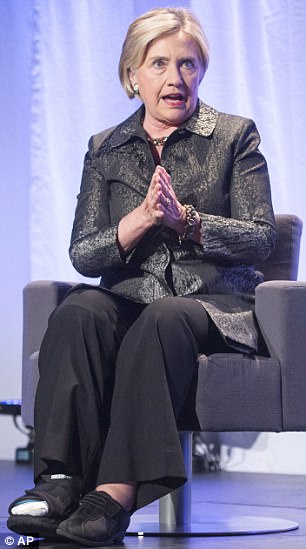 Joe Biden is going to be 78 in 2020 – meanwhile Hillary Clinton, seen here Monday in Montreal, is hanging around as a constant reminder of her massive defeat

5) Hillary Clinton’s still hanging around like a malodorous failure to remind everyone on a daily basis of the world’s biggest and most shocking political defeat. Her global loser tour, in which she continues to blame everyone but herself, is a vote-destroying disaster for the Democrats. She needs to be pushed out into the political long grass, but who will tell her? Every day Hillary stays in the limelight is another win for Trump. Today, it was shockingly revealed that after all her pontificating about Russia, it was ‘Halo’ Hillary who secretly paid for the dirty Russian dossier on Trump to try to smear him. She’ll collude with the worst of them when it suits her, and voters know it.

6) Trump’s doing very well with the crucial election-deciding issue: the economy. The stock markets keep roaring to record highs (Lest we forget, top liberal economist Paul Krugman told us on election night, when the markets tanked, that they would never recover under Trump!), growth continues around a steady 3%, and unemployment numbers have fallen consistently in the past year. If Trump gets his game-changing tax plan through, and I think eventually he will, then the US economy will likely surge forward just in time for his 2020 campaign. As Reagan and Clinton proved, when an incumbent president runs with a strengthening economy behind him, he’s pretty much unbeatable.

7) His base is rock solid. The polls suggest everyone who voted for Trump last time would do so again. I’ve spent time down in states like Florida and Texas recently and they’re revelling in Trump’s presidency. Everything the screaming liberals loathe about him, from The Wall and travel ban to his ‘Fake News!’ mantra and attack on kneeling NFL players, they love.

8) On the foreign stage, far from being the disaster that Corker and Flake claim, I’d argue that Trump’s proven himself to be rather effective in re-establishing America’s status as the world’s No1 superpower. He slapped Syria dictator Bashar al-Assad round the chops when he tested him with a chemical weapons attack, he’s got ISIS on the run from places like Raqqa exactly as he promised, and he’s stood up to North Korean lunatic Kim Jong-un and told him if he messes with America, he and his country will be vaporized. I very much doubt bellicose self-preservationist Kim will now test that theory. Trump’s visits to places like Saudi Arabia, Poland and France were all huge successes, and I confidently predict now that his trip next week to Japan and China will be too. For all his faults, Trump’s a world-class schmoozer when he needs to be, and a savvy negotiator. By all accounts, most foreign leaders have enjoyed their interactions with him.

It remains astonishing that a 70-year-old man is the best social media practitioner on the planet, but he is. Trump uses his tweets to refute damaging stories, promote positive ones, take down enemies and talk up friends. More importantly, he’s been able to by-pass mainstream media to get HIS message out to millions of people, exactly how HE wants to, and in an often brutally frank manner that his supporters thoroughly enjoy. That is Utopia for any politician. By 2020, Trump will have trebled or quadrupled his current social media follower counts, giving him an unprecedented and incredibly powerful platform to fight the next election.

10) Trump’s the incumbent president and historically, 70% of those who run again get re-elected. The stats are on his side.

So scream all your like next week, hysterical Trump-hating liberal snowflakes, but I’d save some of your voice for Wednesday, November 4, 2020.

Because that’s when, as things stand, I predict Donald J. Trump will be re-elected President of the United States.