PIERS MORGAN: Trump versus Biden is a fight I’d pay to watch

I can picture it now, can’t you?

Acclaimed big fight ring announcer Michael Buffer, microphone in hand, standing in the middle of the White House lawn in three years time, and booming: ‘Ladies and gentlemen, tonight we are going to witness the most anticipated match in the history of professional politics. In the blue corner, the challenger, from Scranton, Pennsylvania, aged 77, 6ft tall and weighing in at 180lbs, Joe ‘Bruiser’ Bi….den!’ In the red corner, the reigning champion, from Queens, New York City, aged 74, 6ft 2 tall and weighing in at 239lbs, Donald J. ‘Demoraliser’ Tr….ump! From the capital city of the United States of America, Washington DC, for the thousands in attendance and the millions watching around the world, let’s ..get…ready to rumble!’

Let’s be honest, this would be a perfectly fitting finale for a presidency that to many has seemed increasingly like a particularly turbulent season of Celebrity Apprentice.

Barely a day has gone by in recent weeks without a dramatic new plot twist, a seething personality clash or a high profile firing.

Biden struck the first blow, during a speech at an anti-sexual assault rally in Florida on Tuesday in which he raged:

This boxing match would be a fitting finale for a presidency that to many has seemed increasingly like a particularly turbulent season of Celebrity Apprentice. Biden struck the first blow, during a speech on Tuesday. ‘If we were in high school, I’d take him behind the gym and beat the hell out of him’

‘A guy who ended up becoming our national leader said, ‘I can grab a woman anywhere and she likes it.’ They asked me would I like to debate this gentleman, and I said ‘no.’ I said, ‘if we were in high school, I’d take him behind the gym and beat the hell out of him.’”

Biden continued: ‘I’ve been in a lot of locker rooms my whole life. I’m a pretty damn good athlete. Any guy that talked that way was usually the fattest, ugliest SOB in the room.’

To my astonishment, Trump waited 36 hours before responding, but when he finally did, he went straight to DEFCON 1.

‘Crazy Joe Biden is trying to act like a tough guy,’ the President tweeted. ‘Actually, he is weak, both mentally and physically, and yet he threatens me, for the second time, with physical assault. He doesn’t know me, but he would go down fast and hard, crying all the way. Don’t threaten people, Joe!’

Even by Trump standards, this was an extraordinary statement. 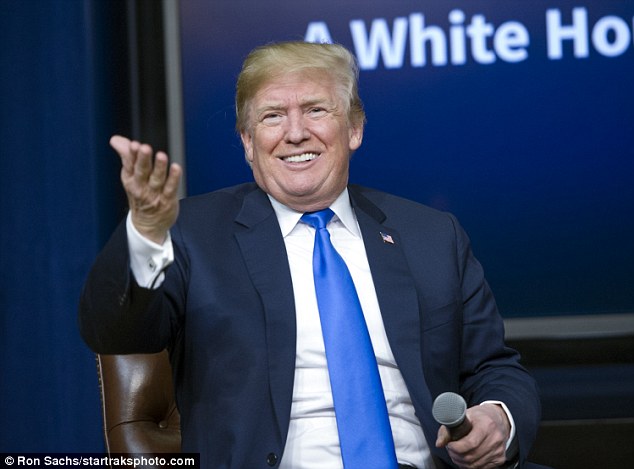 Trump responded Thursday morning on Twitter, Biden ‘would go down fast and hard’ 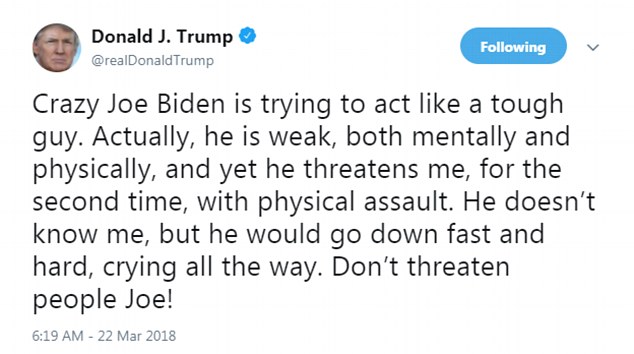 Of course, social media instantly erupted with meme-fuelled glee at the thought of two of America’s most famous men actually duking it out.

They wouldn’t be the first US politicians to settle their differences this way.

In 1805, after years of escalating arguments, former secretary to the treasury Alexander Hamilton challenged Thomas Jefferson’s vice president Aaron Burr to a duel.

Hamilton fired, missed, was shot in the stomach and died.

Nobody imagines Trump and Biden will go that far, though nothing can ever be ruled out with this particular president and their trash talk already makes last summer’s McGregor/Mayweather clash look like a tea party.

Yet beneath the mutually ugly rhetoric lies a far more significant reality: these two men might well be butting heads on a much bigger stage come the 2020 election.

For right now, I can’t think of a better Democrat candidate than Biden.

I thought – and wrote – during the last presidential race that he had a much better chance of beating Trump than Hillary Clinton.

Biden’s a highly experienced politician with none of her controversial baggage or unpopularity; he was a ferociously loyal No2 to President Obama; and he’s endured, with extraordinary courage, considerable personal tragedy – Biden’s lost a wife and two children to accident and illness – that has inserted a powerful human and emotional narrative into an already impressive life story.

He also has an almost unique appeal to both white and blue collar America, liked and respected by people on all rungs of America’s social ladder.

In many ways, Biden couldn’t be more different to Trump.

His easy, folksy manner underpins a life dedicated to family and public service.

However, don’t underestimate the steely street-fighter that lurks behind his warm smile. 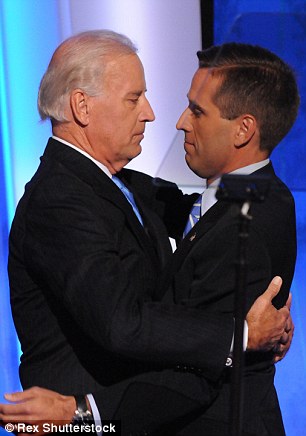 We know he seriously considered running in 2016 but was deterred by the death of his son Beau. Now, he knows this will be his last chance to run and fulfill a lifetime’s professional ambition

Biden’s a tough b*stard and if he does run in 2020 it will be because he believes he can win.

We know he seriously considered running in 2016 but was deterred from doing so by the appallingly early death of his son Beau.

Now, he knows this will be his last chance to run and fulfil a lifetime’s professional ambition.

He also knows that whoever the Democrats field against Trump in 2020 will have huge support from many millions of Americans sick and tired of the billionaire tycoon’s unpredictable, tempestuous, foul-mouthed, tweet-storming, bull-in-a-china-shop style of presidency.

So Biden must be seriously tempted, which is why he told NBC in a recent interview that he would make his decision based on whether it was ‘the right thing to do.’

That buys him plenty of time.

BUT, and it’s a big but, Biden also knows that history may not be on his side.

An overwhelming 75% of US presidents who run for a second term, win.

And that percentage rises significantly if they run again on a surging economy.

Trump’s base is rock solid, and the US economy is strengthening all the time.

He’s already shown himself to be a ruthlessly good campaigner who knows how to win an election by destroying all opponents in his wake.

He will doubtless be even better at it next time round.

So Trump will be a formidable foe.

Yet he would much rather be up against another celebrity candidate like Oprah Winfrey, or a polarising left-winger like Bernie Sanders.

In Biden, he knows he’d be facing an extremely capable centre ground candidate with wide crossover appeal, and someone who hates his guts so would do whatever it takes to beat him – but who would do it with vote-winning charm, style and an unflappable grin on his face.

That’s why Trump is trying to bury him before he even throws his hat in the ring.

That’s also why I’d love Biden to run, and why I think everyone else does too. He’d be the perfect, civilised antidote to all the hatred currently spewing out of Washington from all sides.

But let me end with a note of caution for the challenger if he does:

The 2008 finale of the first season of Celebrity Apprentice was between incredibly likeable country singing star Trace Adkins and me.

NBC billed it as ‘good versus evil’.