Pilot had ’emotional breakdown’ before Kathmandu crash which killed 51 people

The pilot of a Bangladeshi plane that came down in Nepal last year killing 51 people ‘seemed to have an emotional breakdown’ before the crash, investigators say.

A final report on the crash blamed the crew’s loss of situational awareness for the crash, which was the worst aviation disaster in Nepal for 26 years.

The US-Bangla Airlines flight to Kathmandu from Dhaka caught fire on landing in March last year, killing 51 of the 71 people aboard.

The pilot of a US-Bangla Airlines flight from Dhaka to Kathmandu, in Nepal, which crashed and killed 51 people ‘had an emotional breakdown’ before the disaster, investigators say 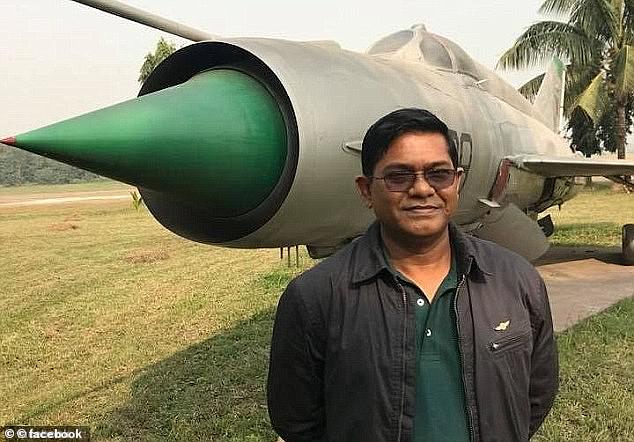 Captain Abid Sultan was smoking in the cockpit and ranting about a female staff member who criticised his abilities even during critical phases of the flight, a final report into the crash said

‘The pilot thought he could maneuver the aircraft and land. But he could not,’ panel official Buddhisagar Lamichhane, told Reuters on Monday.

The captain was under stress and ’emotionally disturbed’ because he felt that a female colleague who was not on board the fatal flight had questioned his reputation as a good instructor, Nepal’s Accident Investigation Commission said.

‘This, together with the failure on the part of both the crew to follow the standard operating procedure at the critical stage of the flight, contributed to the loss of situational awareness,’ said the report, submitted late on Sunday.

This lack of awareness meant the crew did not realise the deviation of the aircraft, a Bombardier Inc Q400 turboprop, from its intended path, which in turn meant they could not sight the runway, it added.

Having missed the runway, the crew was flying very low north of it in an incorrect position near hilly and mountainous terrain around the airport, it said.

‘Finally, when the crew sighted the runway, they were very low and too close to (it) and not properly aligned,’ added the report. 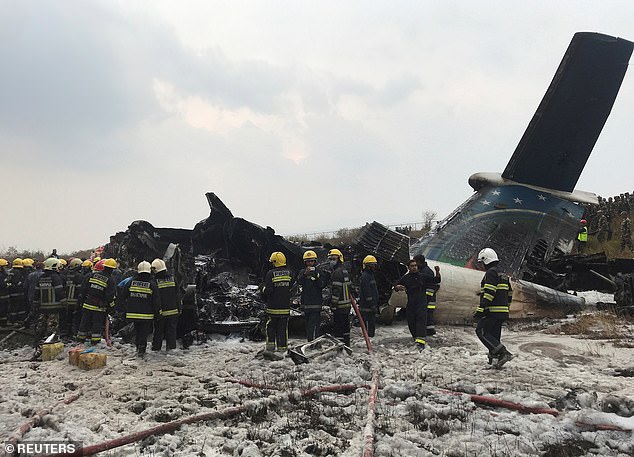 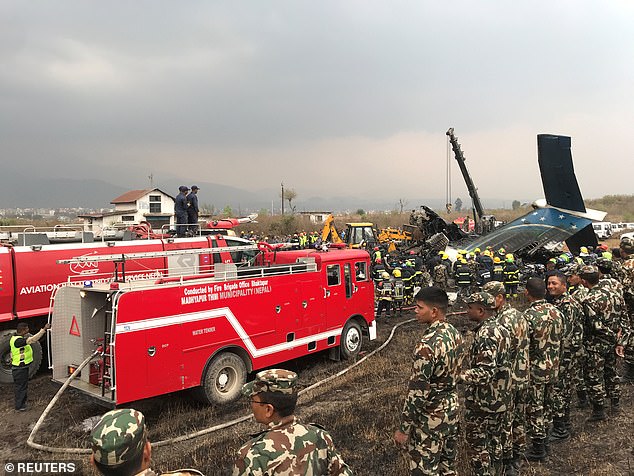 When the crew finally noticed the mistake Captain Sultan did not abandon the landing but instead tried to manoeuvre back on to the runway, causing the smash

The captain should have halted the landing and initiated a go-around, authors said.

Instead he tried to touch down, causing the plane to skid off the runway on to surrounding grass, where it caught fire. Both pilots were among those killed.

The flight’s captain, aged 52, was released in 1993 from the Bangladeshi Air Force because he suffered from depression but was later declared fit to fly civilian aircraft, the report said, with recent medical reports mentioning no symptoms.

Citing the voice recorder and the eyewitness accounts of passengers, the report said the captain was smoking in the cockpit during the flight and ‘engaged in unnecessary, unprofessional and lengthy conversation even in the critical phase,’ violating the norm of maintaining a sterile cockpit. 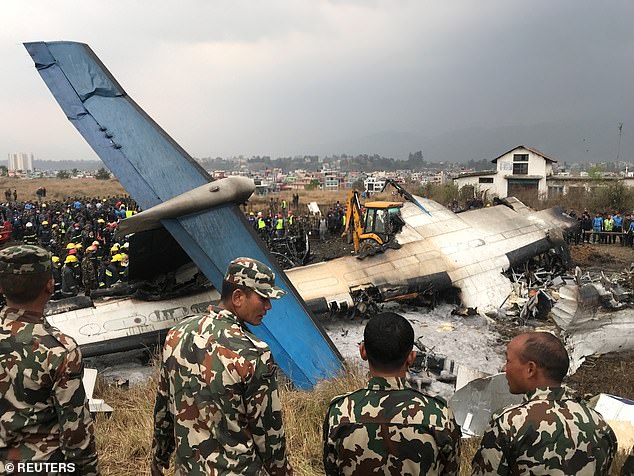 In total 51 of the 71 people on board were killed in the crash and resulting fire, marking Nepal’s worst air disaster in 26 years

He shared the cockpit with a female first officer, 25, who had a total of just 390 hours of flying experience and had never previously landed at Kathmandu as crew, the report said, contradicting a US-Bangla spokesman who last year said she had made landings there before.

Landing at Kathmandu airport, which is surrounded by hills, is considered difficult. In 1992, all 167 on board a Pakistan International Airlines aeroplane were killed when it plowed into a hill as it tried to land.

On the US-Bangla flight, the disparity in experience and added authority of the captain probably deterred the first officer from being more assertive during significant phases such as the final approach and landing, the report said.

The report recommended that the airline emphasise proper crew resource management and set up a mechanism to monitor and assess the mental status of the crew regarding professional development, financial, personal and psychological issues.

Pilot mental health was spotlighted by a 2015 crash in Europe after a Germanwings first officer deliberately flew a jet into a mountainside.

Last year, the European Commission adopted new rules on the mental health of pilots, for the first time requiring airlines to do a psychological assessment before hiring them.