Pilot killed after small plane crashes off coast of Florida

A small corporate plane crashed into the ocean off the coast of Florida last week as it was approached by a set of military fighter jets after losing communication for an hour and veering off its flight path.

The only person on board was the pilot whose name has not yet been released. He is yet to be found.

The plane was a small Cessna Citation V. It left St Louis Regional Airport in East Alton, Illinois, on Friday at around 3.30pm.

It belongs to Hypo Consulting LLC, a Florida-based business consulting company. It remains unclear who, if anyone, from the company was on board.

This was the plane’s path from Illinois to Florida. The green path marks where he flew. At 4.50pm, as he flew past the airport he was meant to stop at and over the ocean, the fighter jets scrambled and flew out to investigate. That is when the plane plunged into the ocean where the path turns white

At 4.50pm, after losing contact for more than an hour, the Florida Air National Guard sent two F-15 jets towards it to investigate.

As they approached, the aircraft suddenly plummeted and crashed into the ocean, 310 miles off the coast of Fort Lauderdale.

The crash is still being investigated. It remains unclear if the pilot intentionally sank the aircraft or if something else caused it.

Maj. Mark R. Lazane, a spokesman for the North American Aerospace Defense Command, also known as Norad, told The New York Times that as the jets approached it, the plane started ‘rapidly descending’.

It remains unclear who the plane was registered to. Its tail number has not been released.

The Federal Aviation Administration would not comment on the crash on Monday.

The National Transportation Safety Board is still investigating. 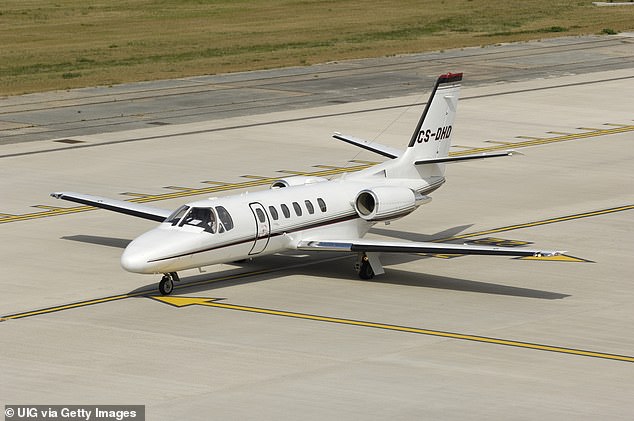 The plane was a small Cessna Citation V. It belongs to a company called Hypo Consulting which is based in Florida but it remains unclear who the pilot wad