A pilot thankful for his life kissed the runway at a Pembroke Pines, Florida airport on Thursday, after surviving a crash landing.

The flight instructor was wrapping up a lesson yesterday morning when the landing gear on the single-engine plane started to malfunction.

He attempted two landings, but had to pull up at the last second when the landing gear on the four-seater airplane wouldn’t lock into place. 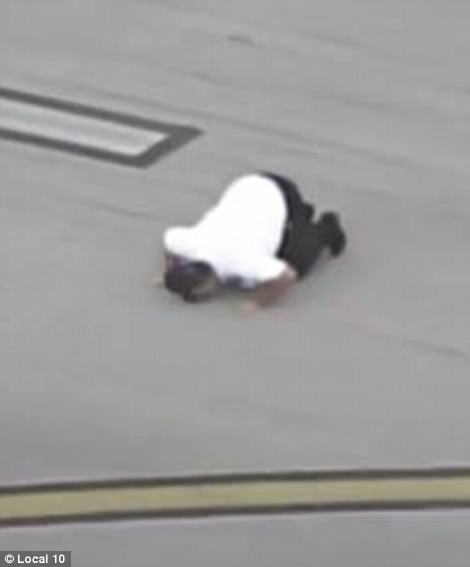 A pilot kissed the ground after surviving a crash landing at North Perry Airport in Pembroke Pines, Florida on Thursday 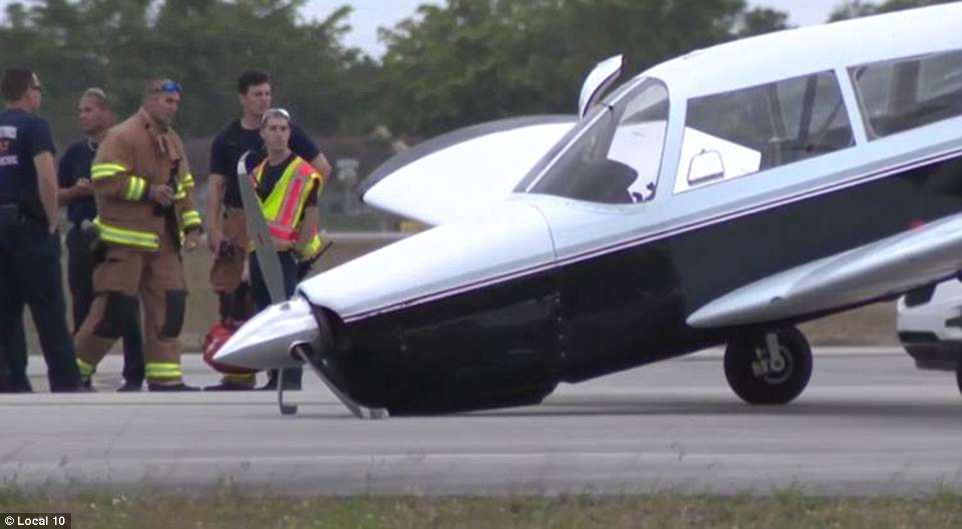 The pilot was wrapping a lesson when he noticed that the landing gear wasn’t locking into place. He then had to make an emergency landing on the plane’s nose

The pilot and his student, already a commercial pilot who is training to be an instructor, then spent a scary 45 minutes circling the airport, burning off fuel in an attempt to stop the plane from exploding during a crash landing.

Around 9.20am, the plane finally began its descent, with local news helicopters filming from the air.

Video shows the student bracing for the landing while his instructor slowly glides the plane down.

As the plane touches down at North Perry Airport, the front landing gear collapses and the plane comes to a stop on its nose.

The student opens his door before the plane even comes to a full stop, and helps his instructor out as they scurry away from the plane in case it explodes. 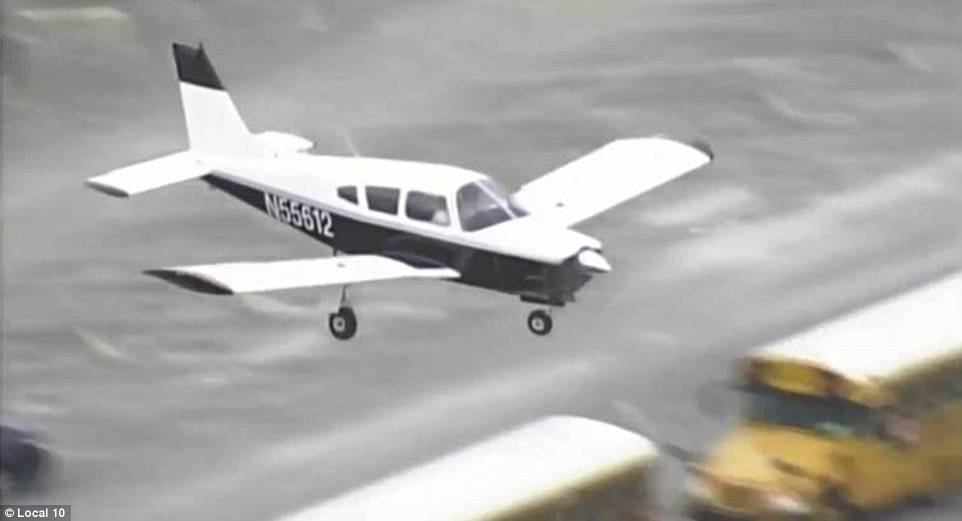 The pilot and his student, who is already a commercial pilot training to be an instructor, circled the airport for nearly an hour to burn off fuel so the plane wouldn’t explode when they crash landed 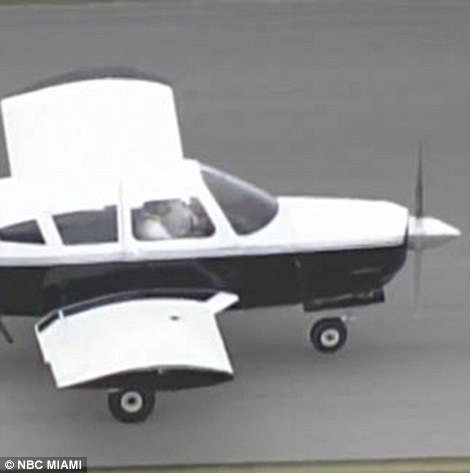 As the plane touched down, the front landing gear crumbled and the plane came to a stop on its nose, causing significant damage When they got away from the plane, the instructor threw his hat off in a sign of victory after the impressive crash landing 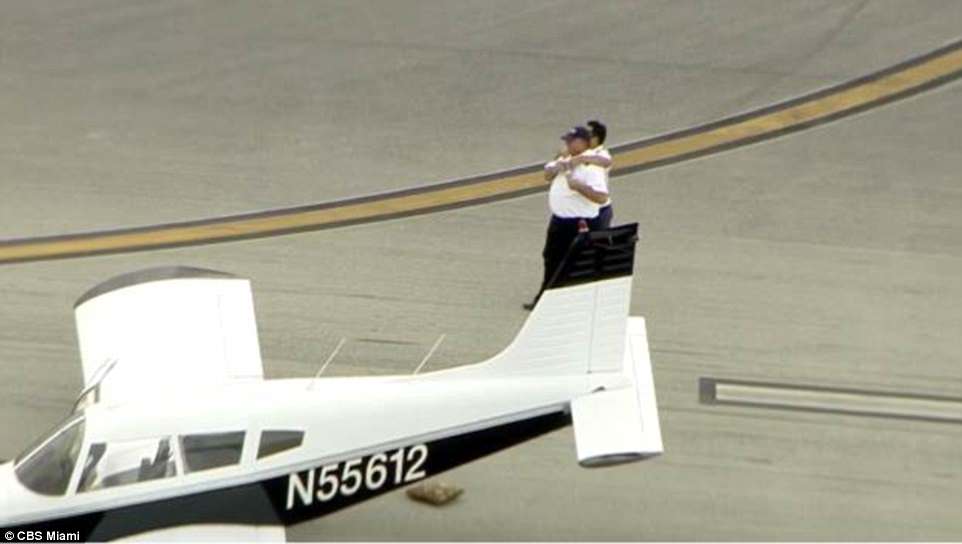 The student hugged his instructor after he saved their lives by landing the plane successfully, despite the landing gear not working

Once a safe distance away, the pilot takes off his hat and swings it over his head, then drops to his knees and kisses the ground.

Moments later, the student comes up to give him a hug.

Firefighters were waiting at the scene in case the plane caught fire, but it didn’t – no doubt thanks to the pilot’s preparation.

Neither the pilot or his student were injured in the incident, but the plane did sustain serious damage.

‘Anytime you have a prop strike like that you are going to have to tear the engine down and redo that,’ local pilot Richard Uecker, who witnessed the crash, told Local 10. ‘It is probably going to be about $25,000 worth of damage to that airplane.’

The plane, a Piper PA-28R-200, is registered to Father & Daughter Aviation LLC in Sunny Isles Beach, but is leased to Wayman Aviation, a flight school. 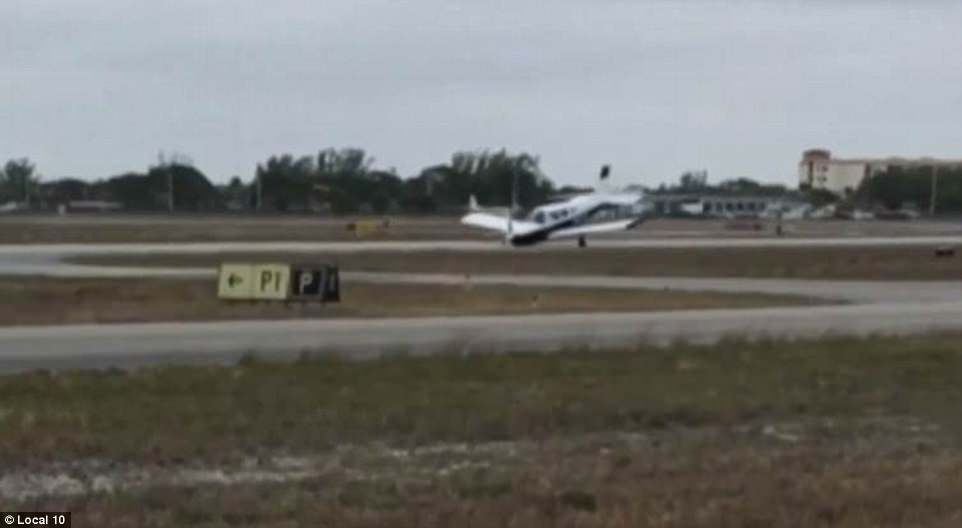 Another pilot captured the crash landing from the ground at the airport. The airport was temporarily closed while the situation was dealt with

The school refused to name the pilot and student in the incident, per company policy, but DailyMail.com discovered that the instructor is Francis ‘Frank’ Goeddeke, who is the school’s chief ground instructor.

However, they released a statement saying they are proud of the instructor’s life-saving actions.

‘A senior instructor and student had an emergency landing. They did a fantastic job and followed emergency procedures. Everyone is safe and unharmed,’ the company said.

Eddy Luy, vice president of the company, said the pilot, who has worked for them for five or six years, did a ‘perfect’ job.

‘His years of experience, and exceptional skills kicked in, and he did a fantastic job of executing an emergency landing,’ Luy told CBS Miami.

Luy told the Sun Sentinel that the emergency landing ‘appears to be a mechanical failure, but it’s still under investigation’.

‘The plane has been with us a long time, we know it thoroughly. You fly enough hours, eventually something is going to happen,’ he said. 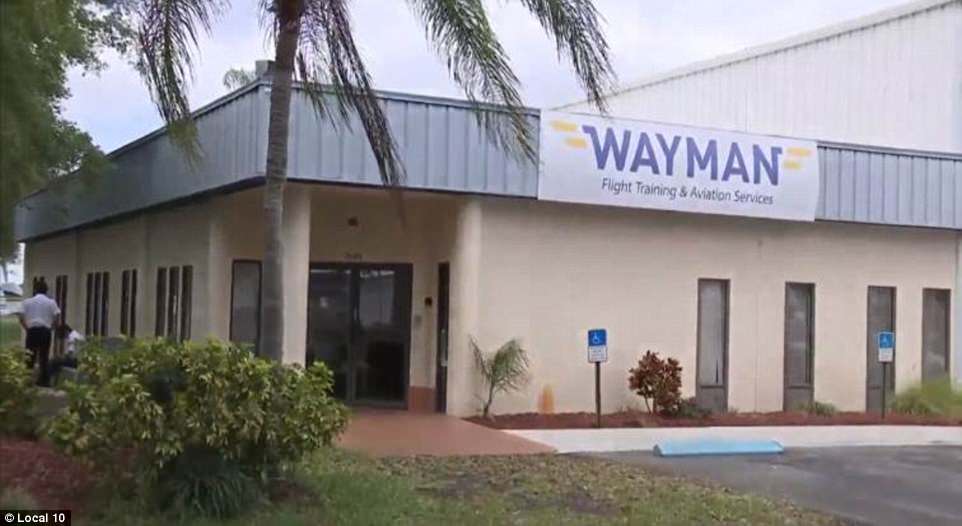 The plane, a Piper PA-28R-200, is registered to Father & Daughter Aviation LLC in Sunny Isles Beach, but leased to Wayman Aviation (above), a flight school.

The plane is the same one that had to make an emergency landing on a levy in the Everglades back in July.

That incident was caused when the plane lost power.

‘It was an interesting phenomenon called carburetor icing, that usually happens when the dew point is high, the ambient air temperature drops, and it restricts air flow into the engine,’ Luy explained. ‘They put the airplane down, we recovered it and it was by and large in good shape.’

That incident caused damage to the landing gear and the fuselage, which was repaired.

‘It was not the same landing gear involved in today’s incident,’ Luy said. ‘We put it back in service. Our school is very well known for doing a high level of maintenance, good quality maintenance.’

Luy also said that the plane ‘absolutely was recently serviced’ but he didn’t know the date of the last servicing offhand.