A pilot has taken incredible photos of Area 51 and other top secret installations on the Nevada Test and Training Range after receiving permission to fly through the highly restricted airspace.

Gabriel Zeifman took the images while flying in his Cessna 150, after receiving permission from air traffic controllers to pass through the airspace last weekend because it was ‘cold’, meaning no military flights were taking place.

‘Probably the most exciting part was the first time I saw Groom Lake (Area 51), it’s just such a rare place to see,’ Zeifman told DailyMail.com. ‘It’s something everyone has heard of but few get to look at. So I’m glad to share a glimpse of it.’

Area 51 is seen with the dry bed of Lake Groom in the foreground. Gabriel Zeifman shared the images after receiving permission from air traffic controllers to pass through the airspace over the weekend 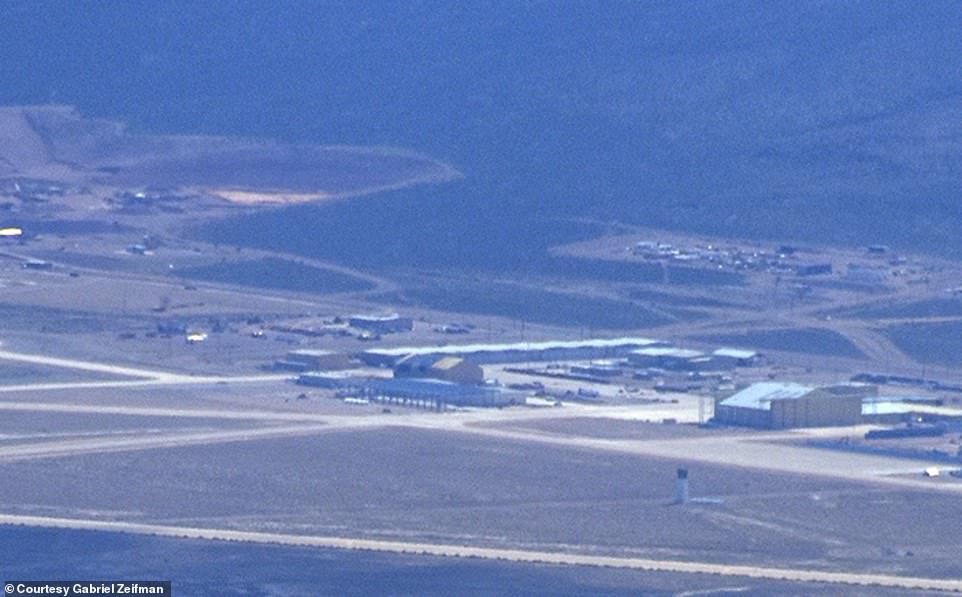 A massive new hangar (center) is seen under construction at Area 51. The purpose of the new building is unclear 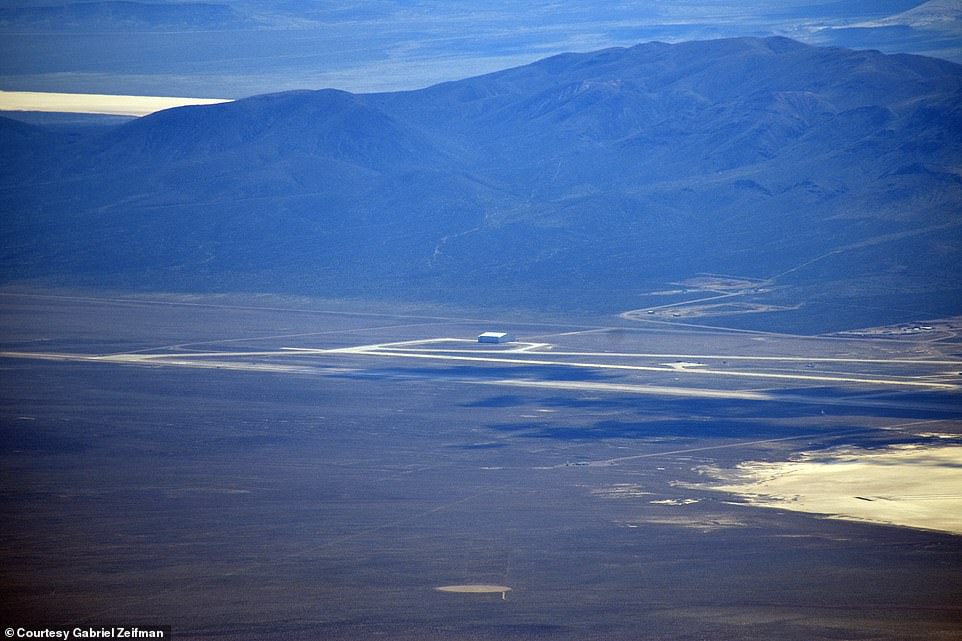 Another massive hangar sits isolated on the far southern edge of Area 51. It has been there for several years

‘It’s definitely interesting flying in the area, all the history out there and the current activities that take place (testing, and exercises such at Red Flag with all the US military branches and NATO allies),’ Zeifman said.

‘So it’s very neat to get permission to fly in there. That being said, you also gotta be on your top game when you’re flying close to pieces of airspace you are not allowed to enter. You never want to stray into someplace you’re not allowed, so it’s definitely something to be very careful with when you’re closely tracking a line,’ he continued.

Area 51 is just one of the sensitive military facilities located within the Nevada Test and Training Range (NTTR), a vast military training area in Nevada’s Mojave Desert.

Details of everything that takes place at Area 51 are classified as top secret, and the intense secrecy around the facility has led to widespread conspiracy theories that it is used to store captured or crashed UFOs.

What is officially acknowledged is that Area 51 was founded by the CIA in 1955 as a testing facility for the secretive U-2 spy plane, and that it has likely been used ever since to test highly classified and experimental aircraft. 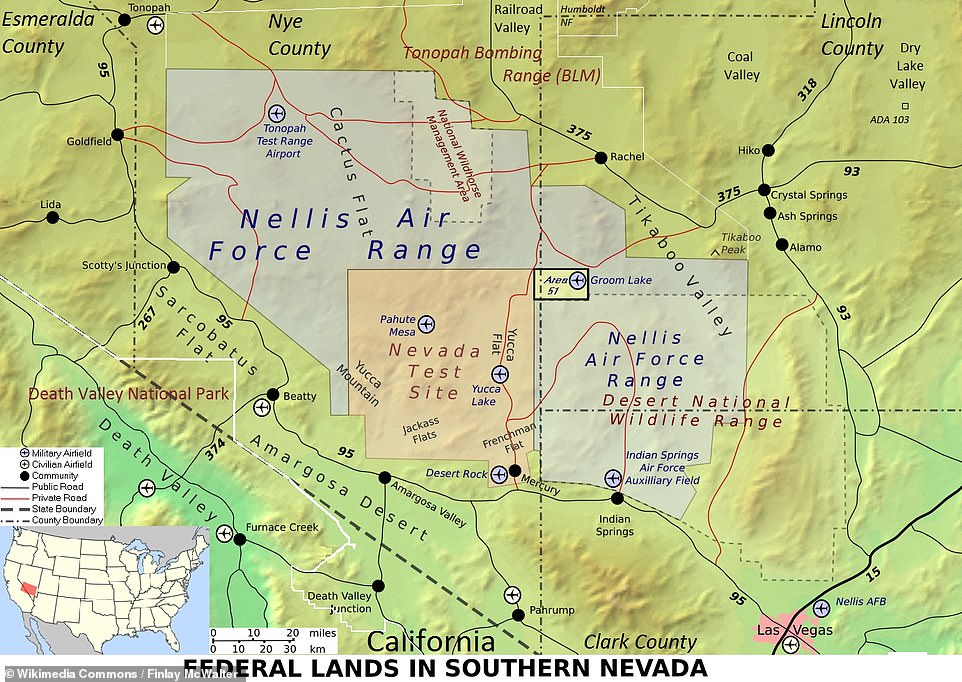 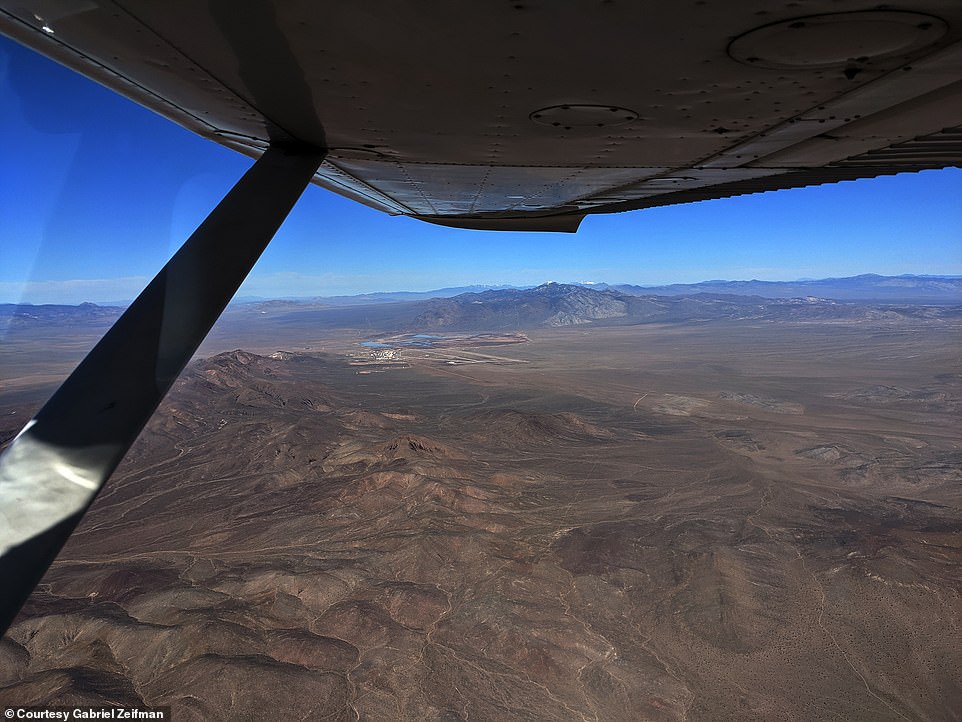 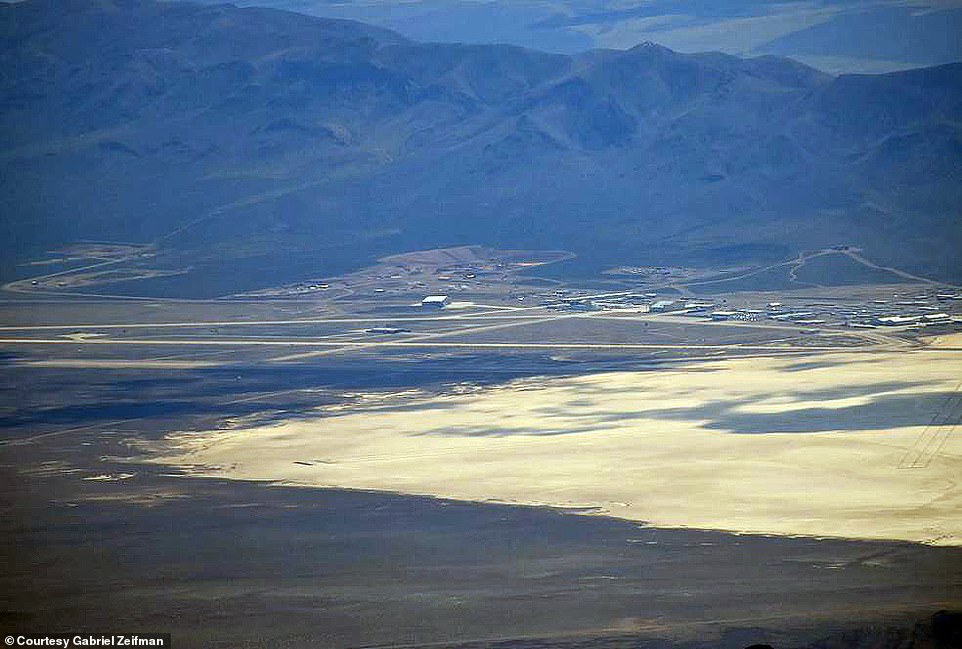 Details of everything that takes place at Area 51 are classified as top secret, and the intense secrecy around the facility has led to widespread conspiracy theories that it is used to store captured or crashed UFOs

Zeifman’s photos show that activity at Area 51 continues to be bustling, with a massive new hangar under construction next to existing hangars that once housed F-117 Nighthawk stealth fighters.

It’s unclear what the hangar will used for, but it dwarfs the Nighthawk hangars that it is being built near.

Another huge nearby hangar, built about five years ago according to The Drive, sits alone to the south of the hangar under construction. Its purpose likewise has never been disclosed.

Zeifman was also able to capture stunning images of the Tonopah Test Range Airport, a major military airfield within the NTTR.

Tonopah was most famously the test site used to evaluate the capabilities of secretly obtained Soviet MiG fighters during the Cold War.

At the height of the Cold War, a secret squadron of Air Force pilots even flew the Soviet fighter jets in mock dogfights against U.S. aircraft to train American airmen. That program was declassified in 2006. 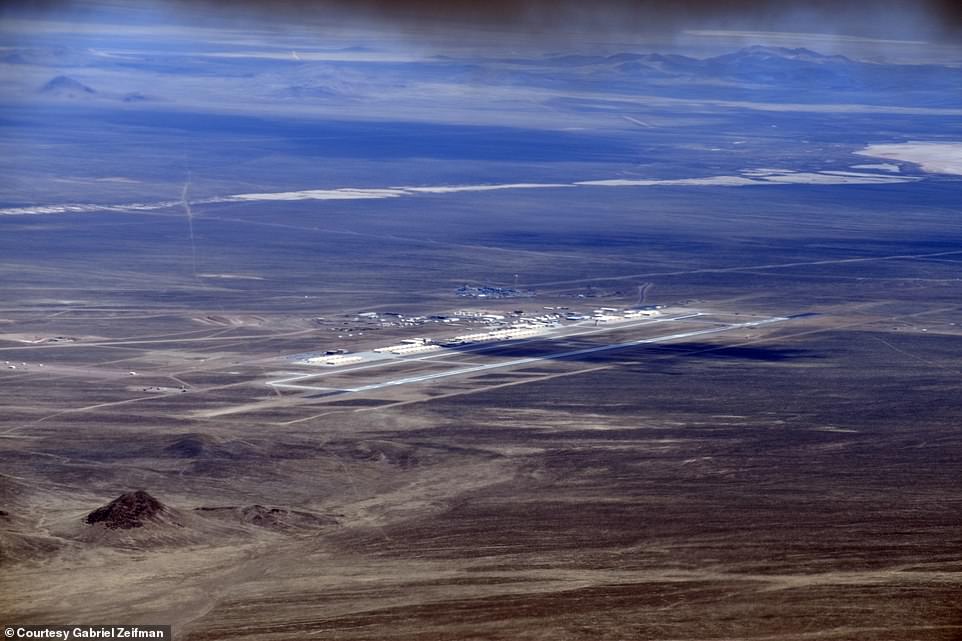 Zeifman also captured images of the Tonopah Test Range Airport (above), a major military airfield within the NTTR 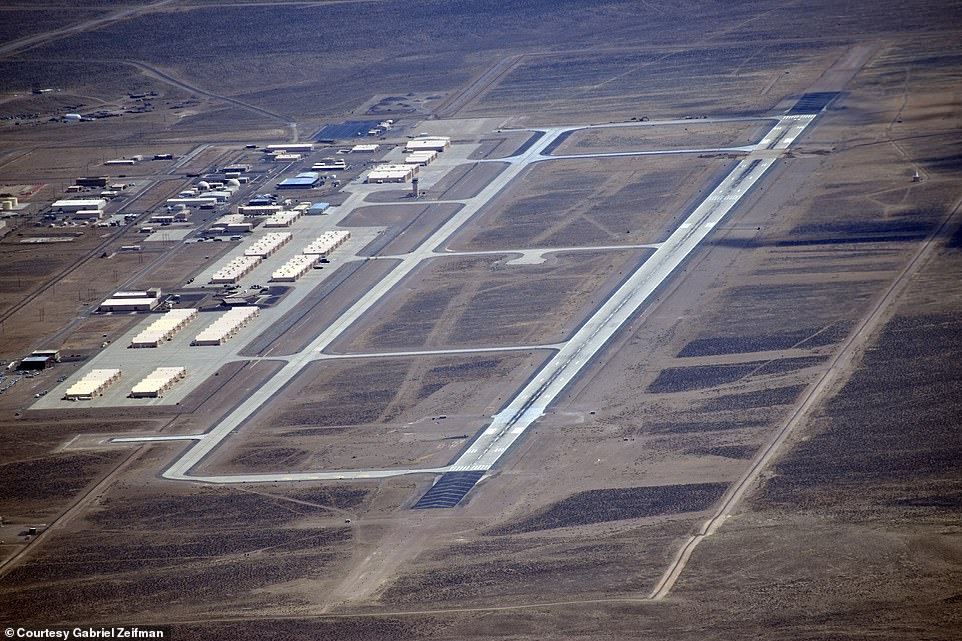 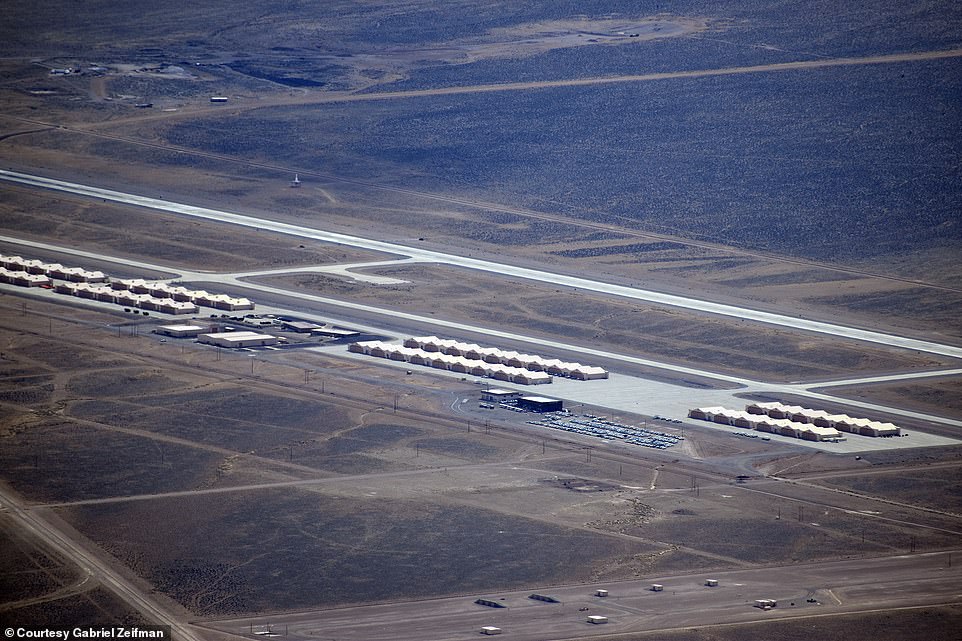 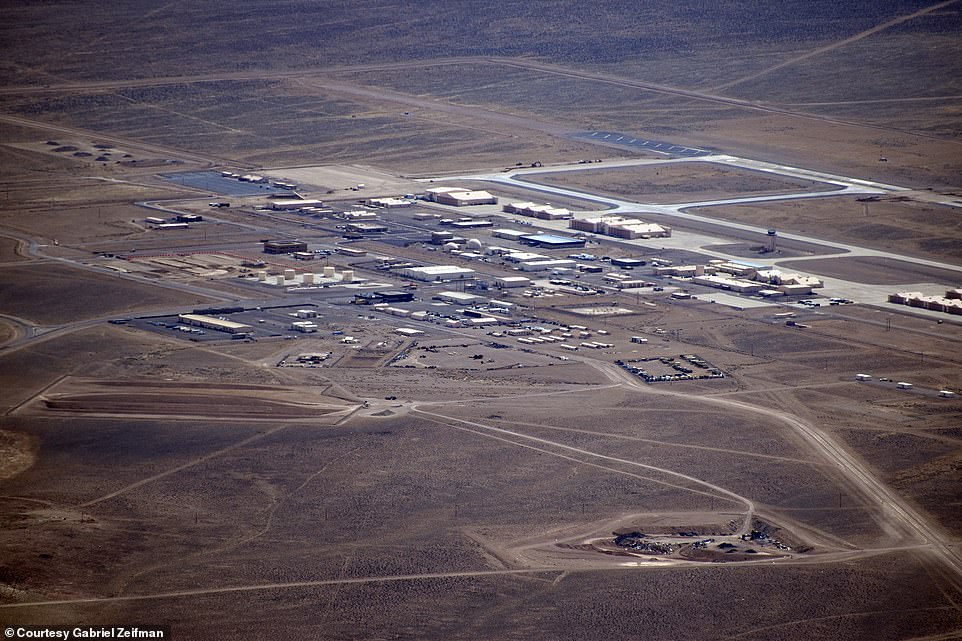 Today, the 30th Reconnaissance Squadron flies RQ-170 Sentinel stealth drones out of the Tonopah (above)

Tonopah was also the main operating base for the Lockheed F-117A Nighthawk for many years, after tests on the stealth fighter were completed at Area 51. Today the surviving fleet of production F-117As remains stored at Tonopah.

Zeifman explained that he had been careful to receive permission for his flights through the highly restricted airspace. The consequences otherwise could have been disastrous.

‘Most of the restricted airspace out there is designated continuously. So what that means is, as a pilot, you have to presume it’s always restricted,’ he told DailyMail.com.

‘In these blocks of airspace, you need to talk to Nellis Approach and be on radar service and get specific permission to enter. If you’re flying a route that will go through and the airspace isn’t actively being used by the military, it is possible to receive this permission for some of the blocks of airspace,’ he explained.

‘I found some times that I thought it may be clear and chose a destination that would take me through the airspace, and luckily a few of the times I was granted permission to transit the airspace,’ he said.

As for any national security implications of sharing the images, it is worth noting that Russia can and does fly directly over Area 51 with sophisticated reconnaissance planes under the Open Skies Treaty.