Pilot who died in helicopter crash is named as Barry Dodd

A pilot who died in a helicopter crash has been named as the entrepreneur and representative to the Queen, Barry Dodd.

Mr Dodd, Lord-Lieutenant for North Yorkshire, was killed yesterday when the helicopter he was piloting came down after midday in Aldborough, a village in Boroughbridge, in Harrogate, North Yorkshire.

Firefighters, paramedics and police rushed to the scene but were unable to save Mr Dodd, who was Her Majesty’s representative in the country during her visits. 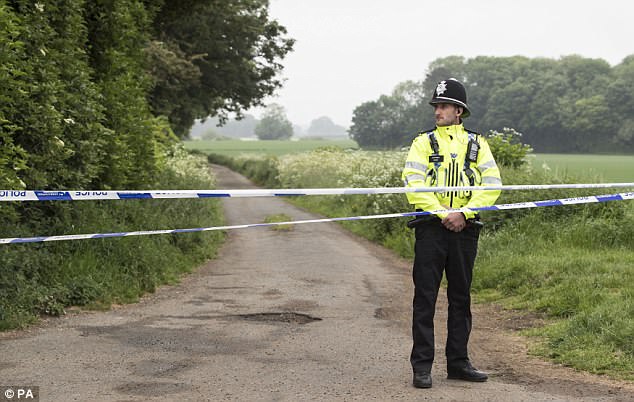 Police activity near the scene in Aldborough, Boroughbridge where a helicopter crashed in a field 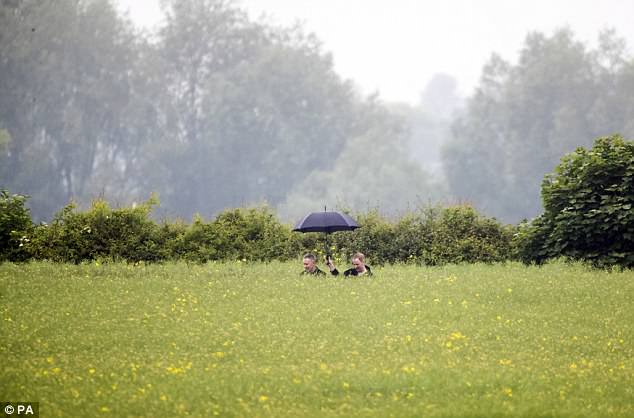 One witness told how she heard an ‘enormous explosion’, while another said a helicopter had been flying very low earlier in the day

A police statement said this morning: ‘Investigations are ongoing to establish what caused a helicopter to crash near Aldborough, Boroughbridge, at 1.23pm on Wednesday 30 May 2018.

‘Sadly, the pilot of the private aircraft was pronounced dead at the scene following the helicopter near Aldborough yesterday.

‘Whilst we await formal identification, we believe he is Her Majesty’s Lord-Lieutenant for North Yorkshire, Mr Barry Dodd CBE.

‘Our thoughts are with his family and friends at this difficult time.

‘Mr Dodd’s family have been informed and are being supported by specially trained officers.

‘The force request the family’s privacy at this very sad time.

‘Officers remain at the scene, alongside the Air Accidents Investigation Branch, whilst investigations continue.’

One witness told how she heard an ‘enormous explosion’, while another said a helicopter had been flying very low earlier in the day. 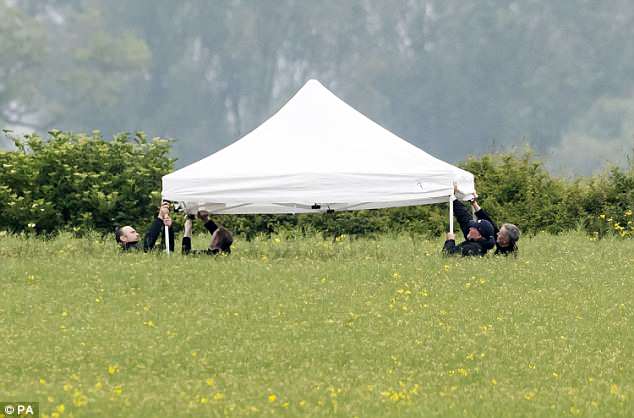 The helicopter is believed to have been a civilian aircraft, although the area is near Dishforth Airfield which is used by the Army 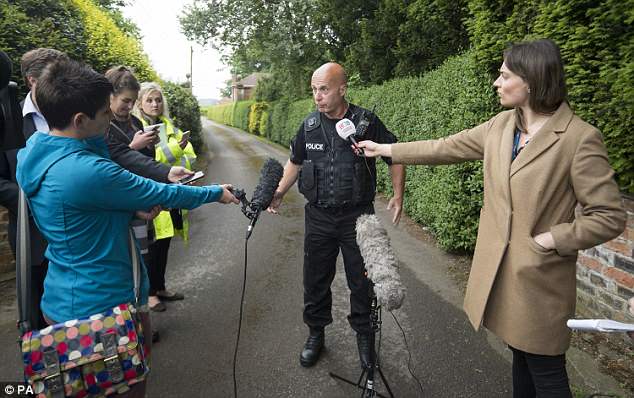 Speaking at the scene of the accident, Dave Hannan, of North Yorkshire Police, said: ‘Unfortunately I can report that one person, the pilot, is deceased in the helicopter’ 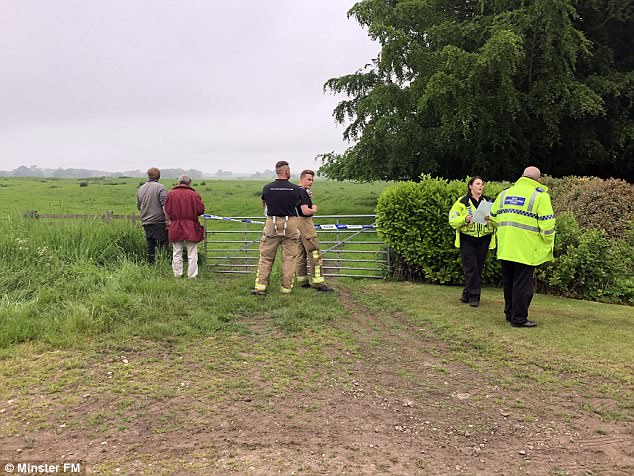 Emergency services headed to the field when they were called shortly before 1.30pm today

Katie McCann, of London, who grew up in Aldborough, said she was in her mother’s house when she heard what sounded like an ‘out of control plane or helicopter’.

Explaining that the crash was behind Aldborough Hall, she said: ‘The clouds are quite low here today and it’s not great weather. Then I heard an enormous explosion.’

The 53-year-old looked out the window and ‘black smoke was everywhere and I just flew out of the house because I thought it was an airplane’.

A man with two boys was on the phone trying the direct emergency services, and Ms McCann helped. ‘You couldn’t see anything,’ she said. ‘There was so much smoke. 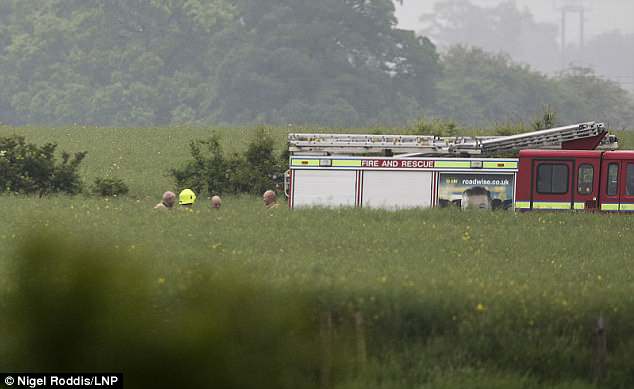 North Yorkshire Fire and Rescue Service got a call at 1.26pm to reports of a helicopter crashing

‘(A man) said he had seen it. It was a red and white helicopter.He said it had climbed up into the cloud like it was trying to recover itself, and then dropped like a stone.’

It only took the first fire engine around three minutes to turn up, she added.

Another resident of Aldborough told local radio station Stray FM how she was surprised to see a helicopter flying very low earlier on this morning.

The woman, named only as Jean, said: ‘It went across the houses in Boroughbridge between 8am and 8.30am this morning – that’s what got me out of the house.’ 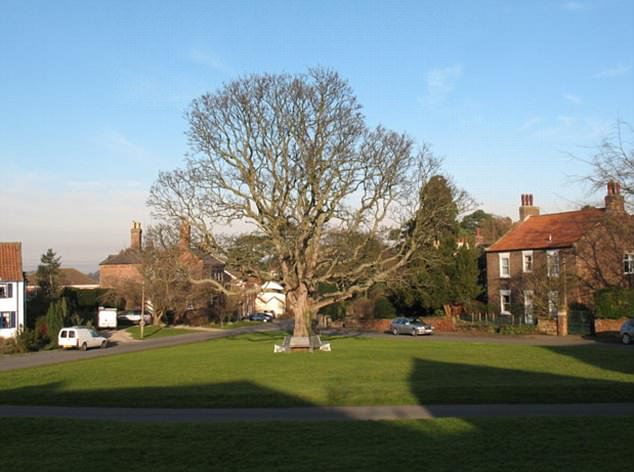 The crash was near the village of Aldborough (file image) in Boroughbridge, North Yorkshire

North Yorkshire Fire and Rescue Service has sent engines from Boroughbridge, Knaresborough, Harrogate and Ripon and crews are using hose reels at the scene.

‘Officers are currently at the scene, which is in a crop field. Fire and ambulance crews are also in attendance.

‘Officers have cordoned off the area and are currently conducting a search of the scene. Police are not yet able to confirm any information about casualties.’ 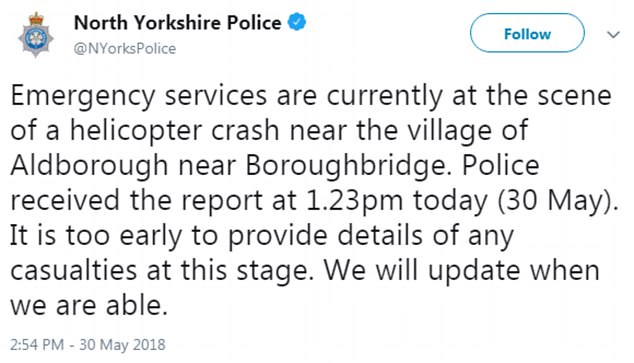 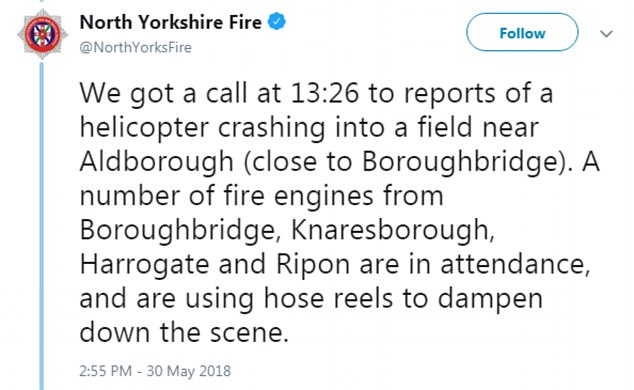 A North Yorkshire Fire spokesman said: ‘We got a call at 1.26pm to reports of a helicopter crashing into a field near Aldborough, close to Boroughbridge.

‘A number of fire engines from Boroughbridge, Knaresborough, Harrogate and Ripon are in attendance, and are using hose reels to dampen down the scene.’

Yorkshire Ambulance Service are also in attendance at the scene, which is about 15 miles north east of Harrogate and 17 miles north west of York.

The Air Accidents Investigation Branch confirmed it was sending inspectors to investigate what it described as an ‘accident involving a helicopter’.