Businessman Charlie Mullins has backed Liz Truss’ comments that British workers need ‘more graft’ and said work from home culture made people ‘feel they’re entitled to get money and do nothing’.

The Pimlico Plumbers boss said the Tory leadership hopeful was ‘undoubtedly’ correct after a leaked recording of her saying there was a ‘fundamental issue of British working culture’ emerged.

‘Of course, many British workers are lazy.

The business owner blasted WFH culture for the decline in British working culture, saying that it has ‘changed people’s idea of wanting to go to work for the worse off’. 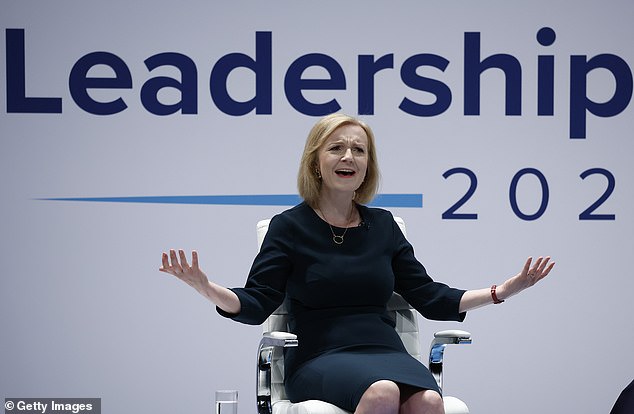 Asked about the tape at hustings in Perth last night, Liz Truss said she wanted ‘more productivity across the country and we need more economic growth’

He continued: ‘The pandemic has made people a lot more comfortable at home and not wanting to go to work.

‘The good workers are in work and the ones who don’t want to go to work, or want to work from home, for me they’re the lazy people’.

Mr Mullins said his main issue with British working culture was that some people ‘feel they’re entitled to just get money and do nothing’ compared with foreign workers who ‘are more hardworking’.

‘There’s no two ways about it, I find most foreign workers are more hardworking,’ he said.

‘They work twice as hard as some of the Brits, that’s quite noticeable.’

His comments came after Liz Truss faced a backlash for a leaked recording obtained by the Guardian in which she could be heard saying British workers lack ‘graft’.

In the recording, Ms Truss can be heard saying: ‘There’s a fundamental issue of British working culture.

‘Essentially, if we’re going to be a richer country and a more prosperous country, that needs to change. But I don’t think people are that keen to change that.’

She added there was a ‘slight thing in Britain about wanting the easy answers’, before saying: ‘But actually what needs to happen is more… more graft. It’s not a popular message.’

She also said that productivity was ‘very, very different in London from the rest of the country’, claiming this was ‘partly a mindset and attitude thing’.

‘If you look at productivity, it’s very, very different in London from the rest of the country. But basically this has been a historical fact for decades. Essentially it’s partly a mindset and attitude thing, I think. It’s working culture, basically.

‘If you go to China it’s quite different, I can assure you.’

In the remarks – made when Ms Truss was a Treasury minister between 2017 and 2019 – she warned that for Britons to be ‘richer’ productivity must improve.

Asked about the remarks at the Tory leadership hustings in Perth last night, Ms Truss said: ‘I don’t know what you are quoting there but the points that I have always made is what we need in this country is more productivity across the country and we need more economic growth.

Ms Truss’ ally, former Cabinet minister Sajid Javid said on Wednesday he ‘didn’t know the exact context’ the comments were made when he was asked, and stressed that British workers are ‘the most hard-working in the world’.

Meanwhile, a Truss campaign source said: ‘These half-a-decade-old comments lack context but one thing that is as clear today as ever before is a need to boost productivity, which leads to higher wages and a better quality of life for workers right across the UK. As prime minister, Liz will deliver an economy that is high wage, high growth and low tax.’