In the seventh bill of the current season of Harold Pinter plays you get two shorts. Martin Freeman (of Sherlock fame) and Danny Dyer star in The Dumb Waiter, about a pair of hitmen. But more of that in a minute.

The evening opens with A Slight Ache, written for radio in 1958, and the staging here recreates the radio studio. Two actors, John Heffernan and Gemma Whelan, play a married couple on midsummer’s day wondering how best to kill a wasp that’s got into the marmalade. The wife’s strangulated voice is in full Fifties period – ‘yes’ is ‘earce’.

This summery paradise turns somewhat darker when they invite indoors a smelly old match-seller who’s been standing at their gate. 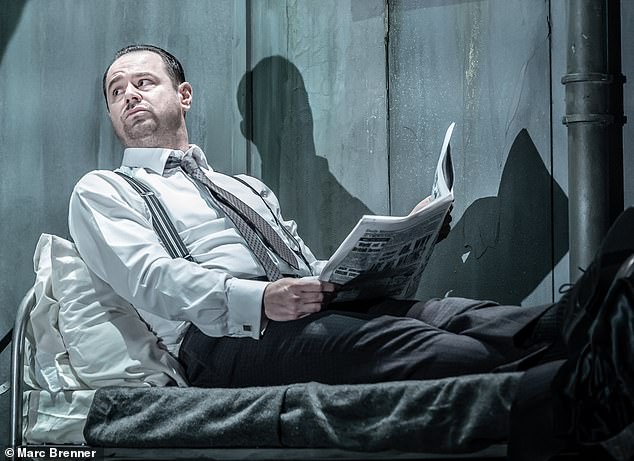 In the 7th bill of the current season of Harold Pinter plays you get two shorts. Martin Freeman (of Sherlock fame) and Danny Dyer (above) star in The Dumb Waiter, about a pair of hitmen

The old man we never see. But his presence brings out a bullying streak in his male host, who offers him exotic German wines with all the fake charm of an SS colonel.

Meanwhile, Flora, his wife, denied any warmth from her snarky husband, turns to the ponging match-seller in full seductress mode. Gemma Whelan makes the line ‘You must see my japonica’ sound absolutely filthy.

This surreal, Freudian playlet is cleverly staged with the two actors making their own sound effects as they perform on air. If it finally outstays its welcome, it’s brought to life by two superb performances. 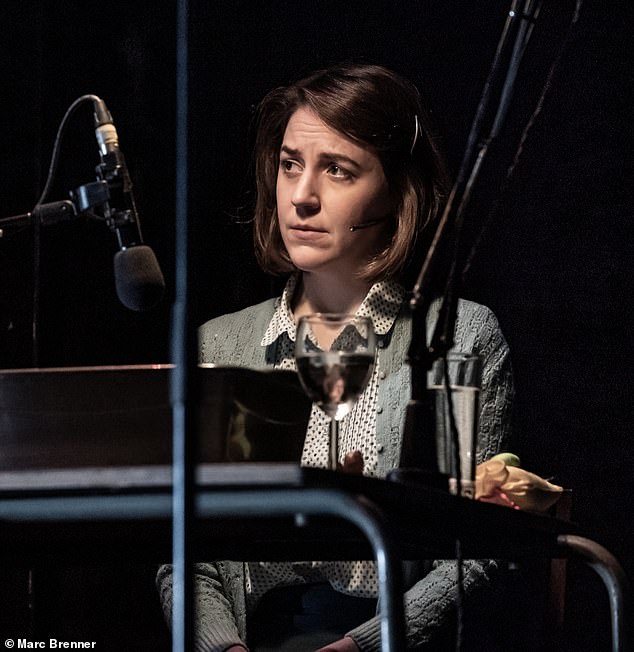 The evening opens with A Slight Ache, written for radio in 1958. This surreal playlet is cleverly staged and brought to life by its superb cast of John Heffernan and Gemma Whelan (above)

The Dumb Waiter is the better piece – also directed by Jamie Lloyd – but less well cast. I had trouble believing that the genial, flummoxed, hobbity Martin Freeman could swat a fly. Danny Dyer, however, is an unreconstructed cockney geezer who looks like he might drill your kneecaps.

The pair await orders in a sordid Birmingham basement with a service lift (the dumb waiter), which descends with a deafening, scary whoosh. The air of menace is relieved only by a vein of Pinter-ish comedy.

When the lift first comes down, the men gingerly inspect it as if it were a bomb. Instead it’s an order for braised steak and chips, jam tart, two teas no sugar. The menu is meant to be horribly tired but now sounds rather yummy. 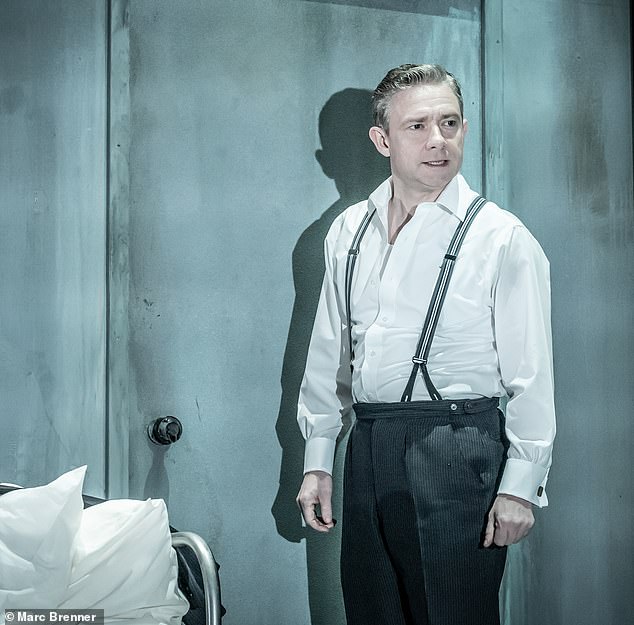 The Dumb Waiter is the better piece but less well cast. While Danny Dyer looks like he might drill your kneecaps, it’s hard to believe the genial Martin Freeman (above) could swat a fly

John Travolta appeared in this as a young actor and would later revive his career as one of a pair of similarly conversational hitmen in the film Pulp Fiction. My hunch is that the film was inspired by this Pinter play.

Though I’ve seen it staged more nail-bitingly than this, it still packs a punch, and comes with a savage killer twist at the end.

This smashing new play, by American writer Martyna Majok, is about disability, and it comes without violins or any soppiness.

Adrian Lester plays (superbly) a truck driver, Eddie, who supports his estranged wife, Ani, following a car smash that’s left her quadriplegic. In return, she gives him a constant ear-bashing. For him, that’s better than being lonely.

Over in a posher bit of town, John, a rich, snobbish PhD student with cerebral palsy (played by Jack Hunter) takes on a new carer, the nervy Jess (Emily Barber), who’s on her uppers and living in her car. You soon realise that those doing the washing and towelling are the ones in deepest need. 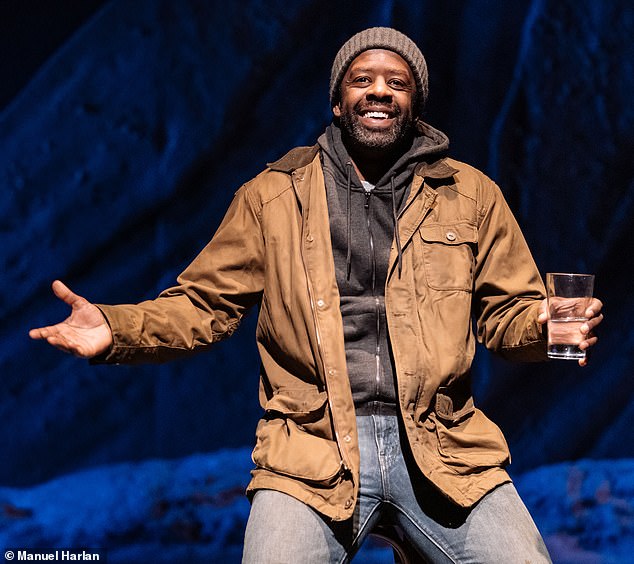 Edward Hall’s expert direction covers up some cracks in the plot and coaxes fine performances from a top-notch cast, in particular Adrian Lester as truck driver Eddie (above)

It all builds into a play of human intimacy. In one unforgettable scene Eddie bathes Ani, his fingers gently playing piano on her useless arm to a tune on the radio.

Edward Hall’s expert direction covers up some cracks in the plot and coaxes fine performances from a top-notch cast.

Especially magical is the American actor and 2012 Paralympian Katy Sullivan as the fierce but vulnerable Ani. Highly recommended.

Dave is a 45-year-old jobless drunk, addicted to computer games. To his horror, his stuffy gay son William, 18, has ambitions to be a marketing executive. Dad thinks the uptight boy is ‘a boring poof’.

The solution? He and his lad will hit the beach in Thailand in search of ‘exotic birds’ – a phrase no one has heard since On The Buses.

In Tom Wright’s comedy – sadly not as rambunctious as it promises – Dave hooks up with a mature, mothering ladyboy (Victoria Gigante), and William (Alex Britt) lets his hair down with a pouting architect (Max Percy) who wears Speedos. 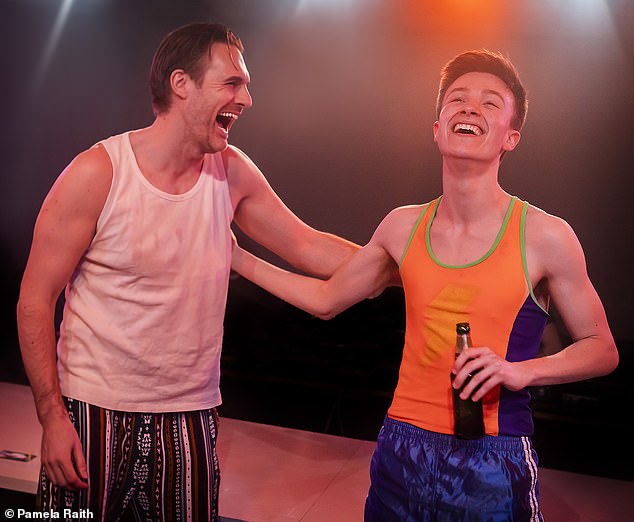 Tom Wright’s comedy My Dad’s Gap Year is sadly not as rambunctious as it promises. Adam Lannon plays a jobless drunk who takes his gay son (Alex Britt, above with Lannon) to Thailand

William’s mum (played by Michelle Collins of EastEnders fame, in totteringly high heels) has had the wit to dump her idiot husband, so she can’t be as impenetrably thick as she seems.

The show has one or two laughs but it too readily settles for a mawkish vein of man-and-boy self-discovery. A promising role-reversal idea for a TV sitcom perhaps, but in this format it doesn’t deliver.