The Duchess of Cambridge suffered a severe form of morning sickness when she was expecting her children, but her sister Pippa Middleton boasts that she is enjoying a Zen-like pregnancy.

The 35-year-old socialite reveals she’s using meditation to cope with the final few weeks before she is due to give birth to her first child.

‘I signed up to a beginners’ meditation class recently to master the tools essential for performing it effectively,’ discloses Pippa. 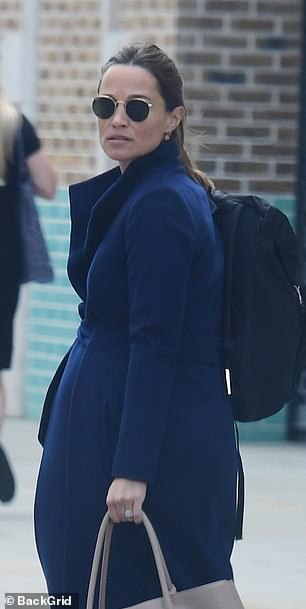 ‘This involved learning to meditate twice daily, ideally for 20 minutes, chanting a mantra, while sitting upright, eyes closed and focused.

‘Our teacher stressed that we should ensure we always make time for this because there’s always an excuse not to.’

She adds: ‘The idea is that your “meditation window” takes your mind and body into a state of pure rest — better than the kind that sleep could give you. Most importantly, it allows an opportunity to restore and nourish both mind and body.

‘I was sceptical at first — but, after practising this discipline for the past month, I have noticed a huge difference in my mental wellbeing and sense of clarity.’

This is not the first time that Miss Middleton, who lives with her hedge fund manager husband, James Matthews, in a £17 million house in Chelsea, has offered some ‘Pippa tips’ on pregnancy.

Last month, she used her Waitrose & Partners Weekend column to explain that she was trying not to ‘break into a penguin-style waddle’ by using ‘barre-inspired workouts’ that would help ensure her ‘favourite jeans will still fit . . . eventually’.

Pippa — whose bottom won worldwide acclaim at her sister’s wedding to Prince William in 2011 — had previously extolled the benefits of playing tennis while pregnant.

She trilled: ‘It’s possible to play right up until the third trimester . . . Continuing to play has a positive influence and can lead to improved placental growth and good weight management, as well as reducing back pain and strengthening heart and blood vessels.’

Model Alexa Chung was not strutting down the catwalk in Paris yesterday — but she still managed to steal the spotlight.

Arriving at the Miu Miu show, the 34-year-old stunned fashionistas in a revealing pair of £1,554 vintage black leather shorts, complete with Western-style studs, made by the Italian designer. Teaming them with a nude jumper, she managed to make her legs look even longer with a pair of patent black heels.

The clothes horse seemed in good spirits as she flashed a smile amid recent reports that her own fashion business Alpha Charlie, which sells her eponymous label online, had ongoing trading losses at £1.5 million.

Figures filed at Companies House reveal she has secured £3.95 million from investors 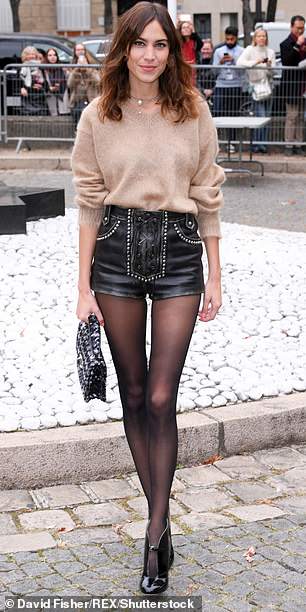 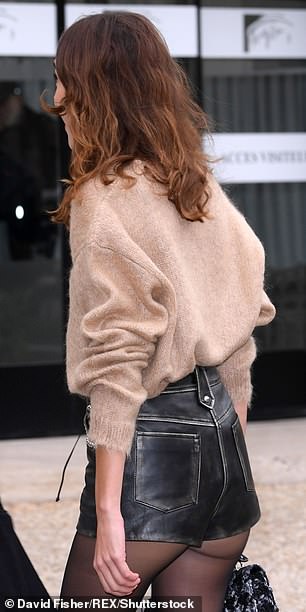 Arriving at the Miu Miu show, Alexa Chung stunned fashionistas in a revealing pair of £1,554 vintage black leather shorts, complete with Western-style studs, made by the Italian designer. Teaming them with a nude jumper, she managed to make her legs look even longer with a pair of patent black heels

Actress Claire Foy, who played Queen Elizabeth in the first two series of Netflix’s The Crown, recently revealed she suffers from a long-term anxiety disorder.

Claire, who has a three-year-old daughter, Ivy Rose, with her actor ex-husband Stephen Campbell Moore, whom she divorced this year, has said of her battle: ‘It’s my mind working at a thousand beats a second, and running away with a thought.’

Happily, the 34-year-old — who won an Emmy for her portrait of Her Majesty — seemed to have plenty to smile about as she popped out in London in a comfy pink jumper, stripey skirt and woolly hat, clutching her daughter’s small grey cuddly toy.

Claire Foy, 34 — who won an Emmy for her portrait of Her Majesty — seemed to have plenty to smile about as she popped out in London in a comfy pink jumper, stripey skirt and woolly hat, clutching her daughter’s small grey cuddly toy

Bartender Blunt’s half pint of mild

The 5ft 6in singer needed a step up to help serve beer at his own pub.

He shared this picture of himself standing on a plastic crate behind the bar of The Fox and Pheasant, the 17th-century watering hole he and his wife Sofia Wellesley bought and restored last year, which is round the corner from their Chelsea home in London.

James, 44, has a two-year-old son with Sofia, the granddaughter of the 8th Duke of Wellington. 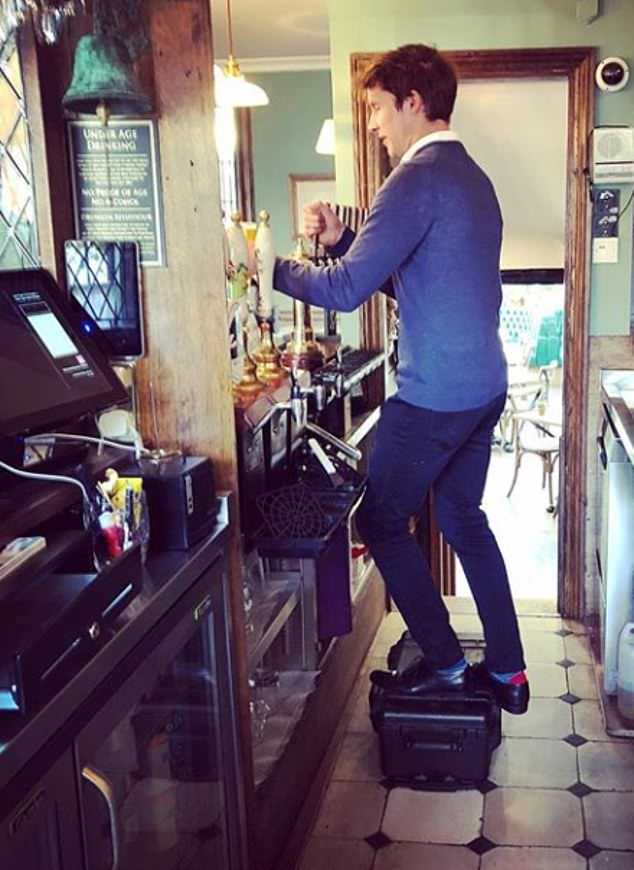 James Blunt, 5ft 6in, needed a step up to help serve beer at his own pub. He shared this picture of himself standing on a plastic crate behind the bar of The Fox and Pheasant, the 17th-century watering hole near his Chelsea home he and his wife bought and restored last year

Rick Stein in a flap after losing his favourite hat

Seafood supremo Rick Stein is in a right old stew. Desperate to recover the beloved Panama hat he bought for his latest series filming around France, he has tweeted his social media followers to see if someone can go and retrieve it — from a hotel in Greece.

His wife Sarah also left behind her Panama, which is an unusual shade of watermelon red.

‘Anyone going to Athens soon and interested in picking up my hat and my wife’s — they’re at the Electra Metropolis hotel,’ the 71-year-old chef implored. In return, he offered to buy the lucky titfer-courier dinner at either of his outlets in London or Australia.

Amazingly, a female airline pilot has taken him up on the offer.

‘It was my job to remember to take the hats from the room,’ Rick tells me, sheepishly. ‘And I forgot them.’

Ray Winstone’s actress daughter Jaime, who has a two-year-old son, Raymond, with her DJ partner James Suckling, says she gets offered more interesting parts now that she is a mother.

‘Before becoming a mum, as a young actress, I was getting female roles that really lacked substance or quality,’ the Tomb Raider star, 33, tells me at the Save Wild Tigers private view at the Royal Albert Hall.

‘You get a lot more interesting roles when you become a mother. There’s something about it that makes people see you in a different light. In your 20s, you’re forced to be this party girl or a certain someone.’

Doctor Who star Jodie Whittaker admits she drinks half a bottle of wine every night — but that’s nothing compared to former ‘It girl’ Tamara Beckwith. ‘If I’m having a night in, I prefer a bottle of red. The whole bottle,’ Tamara, 48, tells me. And, despite recently becoming a grandma, she won’t be copying Nigella Lawson’s routine of a 7.30pm bedtime. ‘Ten is early for me. The last time I went to bed at half-seven, it was half-seven in the morning after a late night.’ 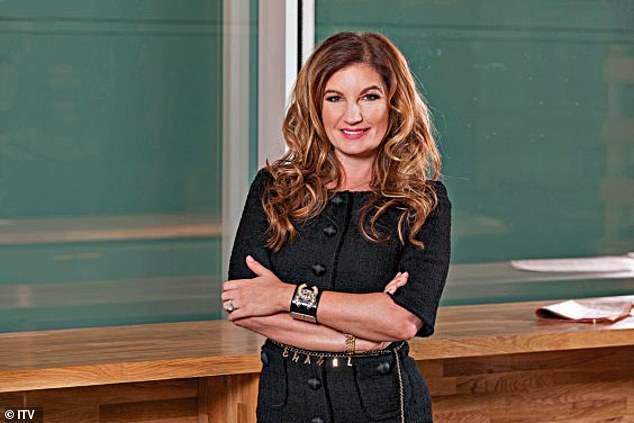 The Apprentice star Karren Brady, 49, says she owes her success to boarding school

Baroness Brady of Knightsbridge says she owes her successful career to the privations of boarding school.

The Apprentice star Karren Brady, 49, who attended Poles Convent, a boarding school in Ware, Hertfordshire, and Aldenham School, Elstree, a boys’ school that accepted girls in the sixth-form, says: ‘I think my ambition and drive probably come from the fact I went to boarding school until the age of 18.

Actress Judy Bennett, who has played Shula in the long-running radio soap about farming folk, The Archers, for the past 47 years, will not be joining the MeToo movement. ‘I’ve never had a man behave inappropriately towards me,’ she tells me. ‘My daughter-in-law says it’s my eyes. Apparently, I have a look that could kill at 30 paces.’