Pittsburgh Pirates relief pitcher Felipe Vazquez has admitted to police that he attempted to have sex with a 13-year-old girl in 2017 and exchanged nude photographs and videos with the victim after first communicating with her through text messages and social media.

According to a criminal complaint released by Pennsylvania State Police as Vazquez sat in jail facing multiple felony charges on Wednesday, the 28-year-old All-Star ‘claimed initially that he refused to communicate with her due to her age,’ saying she appeared to be under 16, which is the age of consent in the state.

Vazquez told police he drove to meet the girl in Scottsdale, Pennsylvania in 2017 when she was 13. He says he pulled down her pants and attempted to have sex with her, but told police he then left because he needed to attend a game that night, according to the complaint.

The native of Venezuela admitted to continuing to text the girl, who is now 15, and even told state troopers that he received explicit photos of her as recently as July.

Vazquez was arrested Tuesday morning at his apartment in Pittsburgh on a felony warrant that was issued in Lee County, Florida, where the victim now lives. He is charged with six counts in Pennsylvania and Florida, including statutory sexual assault of a minor 11 years or older, unlawful contact with a minor, and corruption of minors, as well as a misdemeanor count of indecent assault of a person less than 16 years old.

Pennsylvania authorities began investigating Vazquez in August after being contacted by the Florida Department of Law Enforcement. The girl’s mother contacted Florida officials after learning of an alleged sexual relationship between Vazquez and a teenage girl living in Lee County.

According to an incident report from the Lee County Sheriff’s Office, the two originally met at PNC Park in Pittsburgh, where they were photographed together outside the bullpen when she was 13.

‘Shortly after she found him on social media where it escalated from there,’ the report read.

As for the 2017 incident, investigators say Vazquez invited her into his Ford Mustang and pulled down her pants before he allegedly placed her on his lap and ‘attempted to penetrate her vagina with his penis, but was unsuccessful.’

According to the incident report, it remains unclear if ‘that particular incident was consensual or not,’ although the girl was underage, regardless.

The arrest warrant from Florida accuses Vazquez of one count of computer pornography/solicitation of a child and one count of providing obscene material to minors. Pennsylvania officials do not plan to pursue extradition until their investigation is completed.

Vazquez was denied bond during a hearing Tuesday on the Florida charges, with the judge saying the Venezuelan-born Vazquez was a flight risk.

According to the criminal complaint, Vazquez initially claimed he couldn’t remember the girl’s name but said that she attempted to reach out to him through social media. Vazquez at first said he refused to communicate with her because she looked too young, police said. They said Vazquez later acknowledged exchanging photos and videos of a sexual nature with the girl and also visiting her house.

Stephen Limani, a state police spokesman, said the girl moved from Pennsylvania to Florida at some point after the interaction with Vazquez began, though Limani said there was no evidence the move had anything to do with their relationship.

Over the three years the two were in contact, the alleged victim’s family moved to Florida, where authorities ‘obtained information that Vazquez had a reported sexual relationship with a 13-year-old female.’

Vazquez is also accused of performing a sex act in a video that he sent to the girl in July, according to police. Police seized several electronic devices at his Pittsburgh apartment.

Michael Comber, a lawyer for Vazquez, did not immediately return a request for comment.

Major League Baseball placed Vazquez on administrative leave under its agreement with the players’ association on handling domestic violence, sexual assault and child abuse. Administrative leave is not considered discipline. Vazquez goes on the restricted list and continues to receive his $4 million salary but is ineligible to play.

Workers removed a banner depicting Vazquez from outside PNC Park before the Pirates lost to the Mariners on Tuesday night. Team president Frank Coonelly, general manager Neal Huntington and manager Clint Hurdle addressed the players in a pregame meeting and there was a somber mood in the clubhouse afterward. By the time the game ended, Vazquez’s locker had been cleaned out and given to another player.

The Pirates released a statement on Tuesday.

‘Today we were made aware of an active law enforcement investigation involving Felipe Vazquez and his subsequent arrest,’ the statement read. ‘We take this matter, and these charges in particular, extremely seriously.

‘We have informed the Commissioner’s Office of the investigation and arrest. The Commissioner’s Office will immediately place Felipe Vazquez on Administrative Leave (and, as a result, Restricted List) pursuant to the Joint MLB/MLBPA Policy. We need to be respectful to all involved and the ongoing legal proceeding. As a result, the organization, our staff and players cannot comment any further at this time.’

A native Venezuelan, Felipe Vazquez was selected to his second All-Star game this year before Tuesday’s arrest for soliciting a child and computer pornography

Vazquez will continue to be paid while on administrative leave, but there remains a chance his contract could be voided if he is convicted of a crime.

Vazquez has been the National League’s most dominant reliever over the last few years. In addition to his two All-Star nods, the hard-throwing lefty currently boasts a minuscule 1.65 earned-run average, which would be the best in baseball had he enough innings to qualify.

In a separate incident, Vazquez reportedly punched teammate Kyle Crick earlier this month. Crick then injured his finger in the ensuing melee, and has since undergone season-ending surgery.

Archer also explained the tension in the clubhouse following the news.

‘We’re human beings,’ Archer told reporters. ‘You can feel it in your stomach. There’s definitely an uneasiness.’

‘A lot of different emotions were stirred up today, in a lot of different places,’ Hurdle said. ‘How do we connect and support our way through those emotions, how do we continue to improve and hold ourselves to a high standard on and off the field.’ 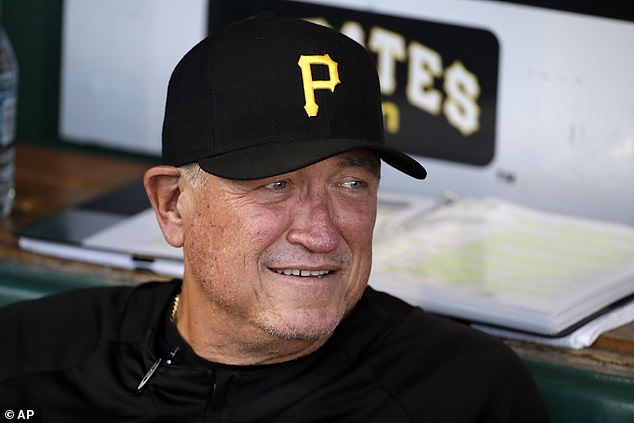 Pirates manager Clint Hurdle addressed the investigation with reporters on Tuesday: ‘A lot of different emotions were stirred up today, in a lot of different places. How do we connect and support our way through those emotions, how do we continue to improve and hold ourselves to a high standard on and off the field?’