This is the shocking moment a furious employee spits in a customer’s food right in front of her following a heated row at a Montana sandwich deli.

ShaeLynn Madplume said she visited Pita Pit in Missoula with a group of friends at around 2am on Sunday to order wraps but were confronted by a hostile member of staff who ‘didn’t want to be at work’.

After daring her to ‘do it’, the employee was caught on camera spitting inside a pita bread wrap she was preparing before throwing food at customers. 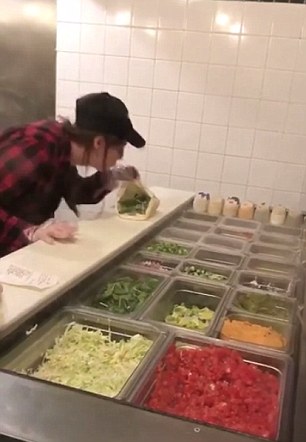 An employee of Pita Pit in Missoula, Montana has been caught on camera spitting inside a customer’s wrap after getting into an argument around 2am on Sunday

When challenged, she tried to justify herself by claiming the store was closed and she wanted to go home.

ShaeLynn later posted the shameful footage on Facebook where it has been viewed more than 200,000 times.

It prompted a grovelling apology from the store’s owners, who claimed they fired the staff member on the spot.

It is unclear what started the row, but the clip begins with the unnamed employee asking: ‘Do you want me to?’

The employee opens the wrap with her fingers and spits inside, making customers gasp.

The customer then jumps onto the deli counter and throws food at the woman, who throws the wrap back at her and says: ‘Yeah, come at me. Why don’t you get outta here?’ 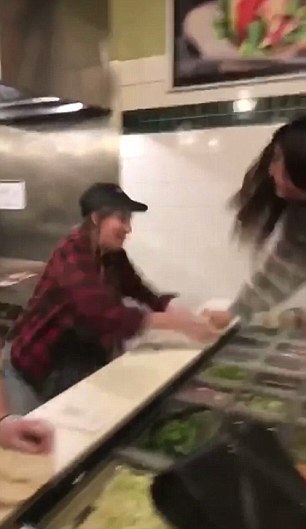 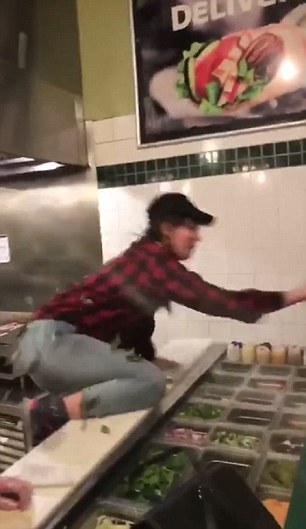 ShaeLynn Madplume said she visited the restaurant with a group of friends when she got into an argument with the employee, who threw food at her (pictured) after spitting in her wrap

‘Yeah, because it’s three o’clock in the f****** morning and I wanna go home,’ the employee responds.

ShaeLynn shouts back: ‘Sorry that you were open.’

But the woman blasts: ‘Do we look open to you?’

ShaeLynn later claimed on Facebook that the restaurant was open until 3am.

The owners of the Pita Pit store said they were ‘shocked and saddened’ by the incident and offered a full public apology.

A co-owner – named only as Nancy – wrote on Facebook: ‘I can see what happened during the video and there is no excuse whatsoever for the type of behavior shown by an employee that I can assure you is no longer working for us.’ 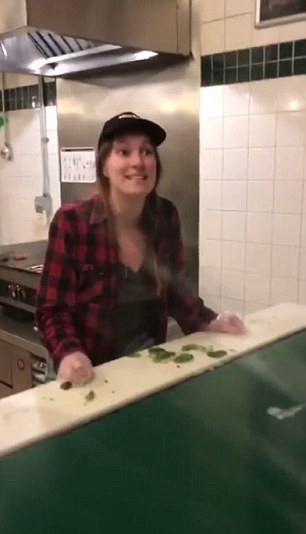 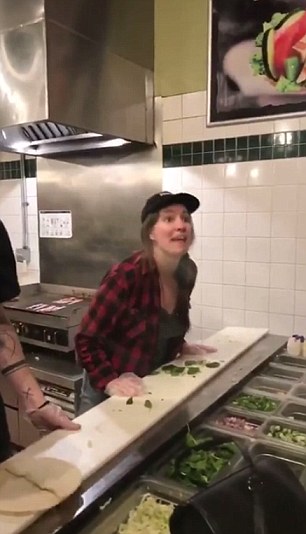 At one point ShaeLynn and the woman argue, with the employee telling her ‘It’s three o’clock in the f*****g morning and I wanna go home’

‘This is an owner-run store. We work here forty-plus hours per week but we are not in during all hours of operation. This employee’s behavior does not represent who we are as a family or a business. It also does not represent the Missoula community.’

‘You were wronged. I know from experience that sometimes all a person feels they can do to stop unjust behaviors is shine the light on them when they occur. Shining that light can propel change. We are reviewing our policies to see what more we can do. The fact remains that employee violated policies that are already in place.’

‘If my husband and I could take back what happened, we would. That is not possible. In this moment of shock and heaviness, we want to offer you, your friends, and the Missoula community our sincerest apology.’

Viewers on social media were disgusted by the footage but suggested there was more to the story than the camera showed.

Bobbie Jo commented: ‘Thankfully she is no longer employed. If she can spit in front of the camera knowing it would be posted to social media what was she doing when customers phoned in an order? Even handling food for that matter?’

Dennis Pierce wrote: ‘The bottom line, regardless of the many dynamics that may have led up to the confrontation: this is completely unprofessional behaviour.’

Linsie Schilling Ballard added: ‘No matter what happened you do not spit in food, even if the customer is antagonising you. You just don’t do it. Refuse to serve them, kick them out, but don’t spit.’