Pittsburgh mother who delivered her own baby pictured

This incredible picture shows a woman who delivered her baby, born in his amniotic sac, eight weeks prematurely in the front seat of her own car.

Raelin Scurry, from Pittsburgh, shared the image of the rare moment, which occurs in fewer than one in 80,000 births, on her Instagram page.

It is known medically as en caul and means the amniotic sac that her son Ean Jamal was carried in inside the womb did not break when he was delivered.

The sac is filled with fluid that allows the growing baby an environment to develop in the womb where it can breathe freely.

When women go into labour, this sac breaks and the liquid drains out. This is more commonly known as the waters breaking.

Miss Scurry was en route to the hospital, when she realised she had just given birth after she pulled her pants down and felt her baby’s head.

The baby was originally still, sparking panic. But he eventually ‘rubbed his face’ using Miss Scurry’s thumb and ‘pulled his little hands up’.

Miss Scurry said this reassured her that he was healthy.

Raelin Scurry, from Pittsburgh, shared the incredible photo of the rare moment, which occurs in fewer than one in 80,000 births, on her Instagram page

Ms Scurry, a mother-of-two was being driven to hospital by her fiance Ean on August 5 after she started to have intense contractions. She was 29 weeks pregnant at the time.

She initially dismissed them as just contractions, which tend to occur around the middle part of pregnancy.

Writing on her Instagram page, she said: ‘The contractions continued to get closer together and more intense and before I knew it I knew it was time to push.

‘I called 911 because I was so scared. They couldn’t understand me between the screams with contractions. So I handed the phone to my fiancé. 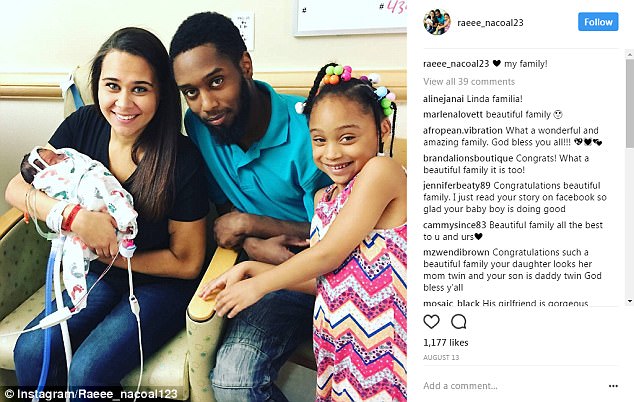 It is known medically as en caul and means the amniotic sac Ean Jamal (pictured with Miss Scurry, his father Ean, and five-year-old sister Amya) was carried in inside the womb did not break when he was delivered 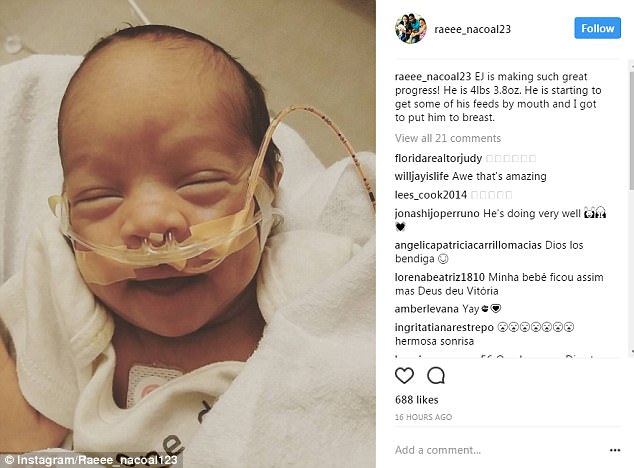 When the mother-of-two gave birth on August 5, she had no idea of the events that were about to take place

‘I pulled my pants off and reached down, sure enough his head was right there. I pushed one time and my miracle baby was here.’

Miss Scurry added: ‘When I looked down I realised he was still completely wrapped in the amniotic sac.’

The couple believed they would make it to hospital quicker than an ambulance would reach them, so continued to drive.

The baby was originally still, sparking panic. But he eventually ‘rubbed his face’ using Miss Scurry’s thumb and ‘pulled his little hands up’.

Miss Scurry said this reassured them both that he was healthy.

The journey to the hospital took seven minutes. They were greeted by staff running to their car.

Medics opened the amniotic sac Ean Jamal, who weighed 3lbs 1oz, was in.

Miss Scurry added: ‘He’s doing wonderful all things considered. I know he’s going to be an awesome little man! He is truly a miracle​ baby. We are so blessed to be his parents.’

WHAT IS EN CAUL?

The amniotic sac starts to form and fill with fluid within days of a woman conceiving.

Amniotic fluid is mainly water, but from about week 10 onwards, the baby passes small amounts of urine into the fluid.

The amount of amniotic fluid increases gradually during pregnancy until about week 38, when it reduces slightly until the baby is born.

Being born ‘en caul’ is the term used when the child is born within an intact amniotic sac, which occurred in the story above. It is also known as a ‘veiled birth’.

Statistics relating to such births are sparse, but deliveries involving any form of caul are thought to occur in roughly one in 80,000 births.

Being born ‘with the caul’, as it is known, occurs when a child is delivered with a portion of amniotic membrane on their face. ‘Caul’ literally means ‘helmeted head’ or ‘veil’.

A baby with the caul is called the ‘caulbearer’.

Being born with the caul in medieval times was interpreted as a sign of good luck and that the child was destined for greatness.

Saving the caul was considered an important tradition of childbirth. The midwife would rub a sheet of paper across the baby’s head and face, pressing the material of the caul onto the paper.

It would then be presented to the mother, to be kept as an heirloom.

Other traditions have linked the caul to fertility and some say it protects a person from the forces of evil, such as witches and sorcerers.