Pittsburgh Steelers defensive end Stephon Tuitt has said that he will not be kneeling during the national anthem when the NFL season resumes in September.

‘Also I’m not kneeling for the flag and screw anybody who have a problem with that,’ Tuitt wrote on Twitter on Monday.

‘My grandmother was a immigrant from the Caribbean and she worked her ass off to bring 20 people over the right way. She had no money and educated herself to be a nurse. She living good now,’ he continued.

Pittsburgh Steelers defensive end Stephon Tuitt, 27, said in a tweet on Monday that he will not kneel during the National Anthem

During six games last year, 27-year-old Tuitt finished with 22 tackles and 3.5 sacks but he ended up missing most of the season after tearing his pectoral muscle.

While Tuitt has been outspoken about not taking the knee, his teammate, Cameron Heyward had said earlier in the year that the entire team would protest in unity, according to Fox News.

‘I think we want to stay united in what we do and what we want to accomplish,’ Heyward said last month, during a conference call with reporters.

‘Coach Tomlin always told me that if we win a Super Bowl, that’s not enough for the city of Pittsburgh. We want to leave a lasting change on our community as well.’ 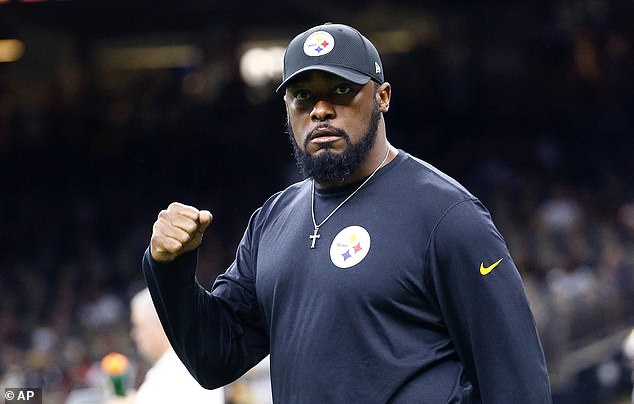 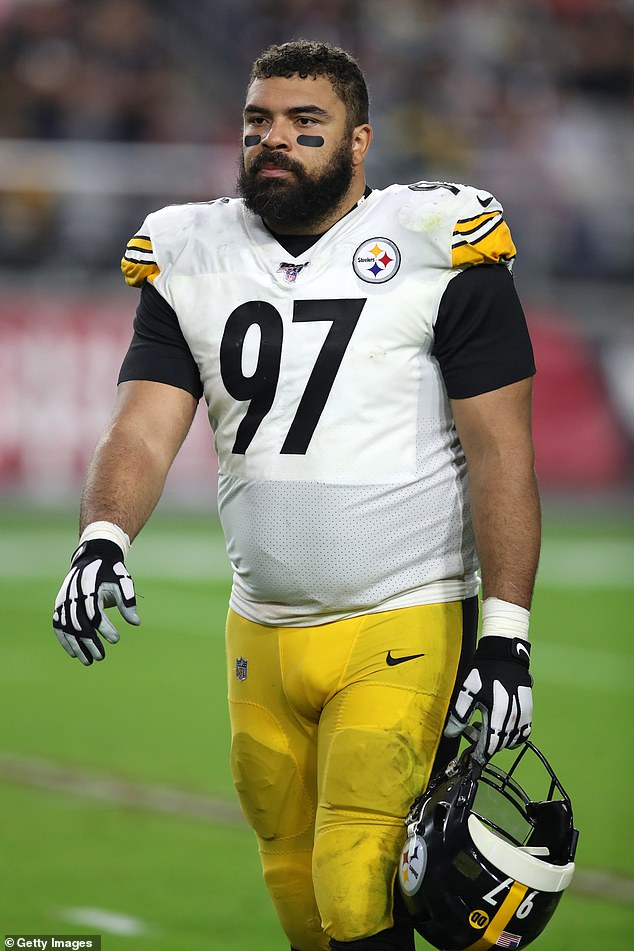 Kneeling protests in sports across the spectrum have gained new prominence in the wake of Black Lives Matter protests sweeping the US following the death of George Floyd in Minneapolis.

Prior to each game on opening day of the 2020 MLB season – which got underway on Friday after a delay due to coronavirus – each team knelt while holding a black rope with patches reading ‘Black Lives Matter’ on their arms.

The kneeling protest took place before the anthem was played.

Similarly, the protest has spread to other sports – including England’s Premier League, where players also took a knee during games with ‘Black Lives Matter’ written on the backs of their shirts.

Fourteen out of 20 Formula 1 drivers also chose to take the knee ahead of the first race of the season, which took place in Australia on July 10. 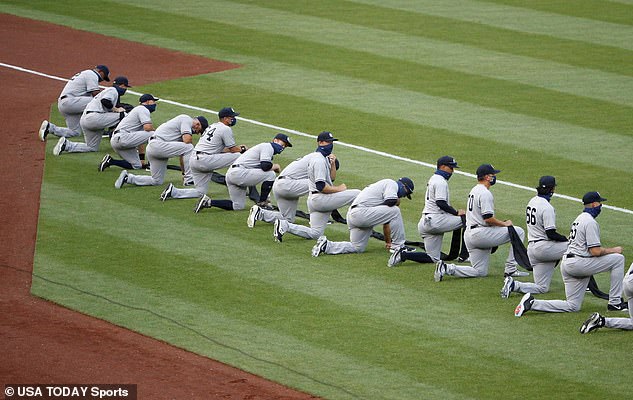 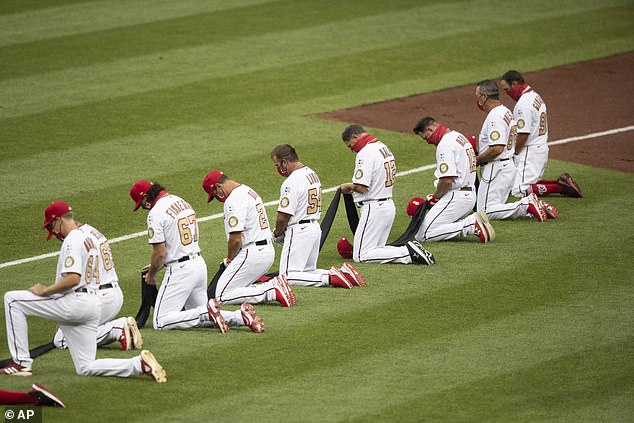 MLB opening day saw athletes from the Washington Nationals kneel in support of Black Lives Matter, though the protest took place before the anthem played 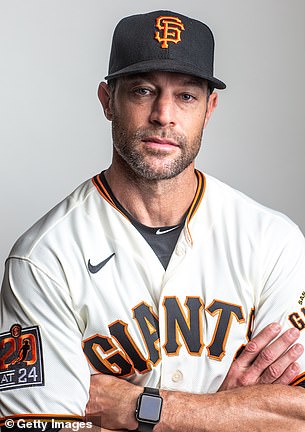 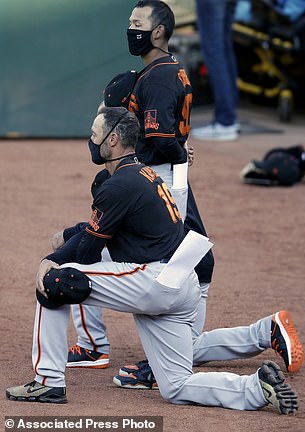 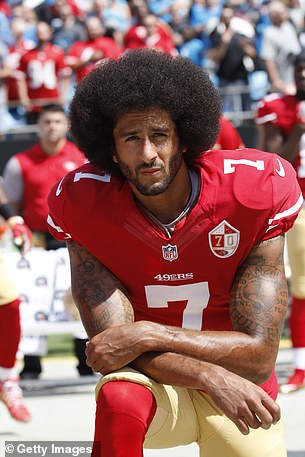 The protests began in 2016 with then-San Francisco 49ers quarterback Colin Kaepernick refusing to stand for the anthem to raise awareness about inequality and racist police brutality.

Since September of 2017, when Trump first seized upon the issue at a rally in Alabama, the president has repeatedly voiced his objection to athletes kneeling in protest. Over that time he has mentioned the word ‘anthem’ in no fewer than 30 tweets.

‘Looking forward to live sports,’ Trump tweeted, ‘but any time I witness a player kneeling during the National Anthem, a sign of great disrespect for our Country and our Flag, the game is over for me.’

NFL Commissioner Roger Goodell said last month that the league made a mistake by not listening to players about racist police brutality. 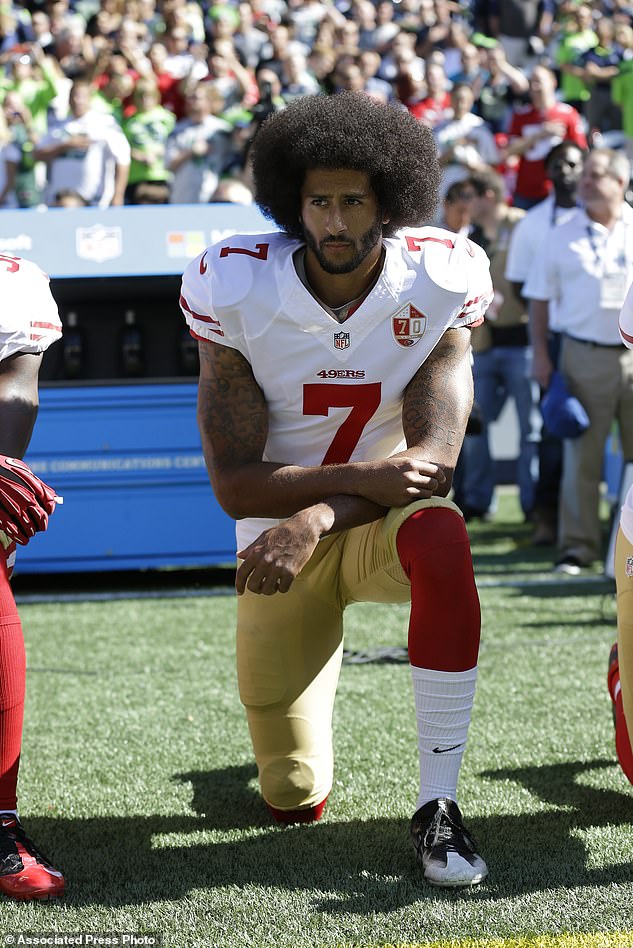 Kaepernick was a second-round draft pick in 2011 who the next year led the San Francisco 49ers to the Super Bowl. By 2016, he had begun kneeling on the sideline at games during the national anthem to protest social injustice and police brutality. Soon after, he was gone from the NFL, and he has not played since

Furthermore, Goodell said he’d encourage teams to sign Kaepernick, who has been a free agent since March of 2017, when he opted out of the final year of his contract in anticipation of his release.

In February of 2019, the NFL settled a grievance with Kaepernick for an undisclosed amount after he accused league owners of blackballing him in retaliation for the controversial protests.

Beginning in September of 2017, when Donald Trump first seized upon the issue, the President has objected to players protesting during the anthem in no fewer than 30 tweets since then

Trump responded to the NFL’s evolving position on player protests at a rally in Tulsa, Oklahoma last month by criticizing Goodell, the son of former republican senator Charles Goodell.

‘And explain this to the NFL,’ Trump told the crowd in Tulsa. ‘I like the NFL, I like Roger Goodell, but I didn’t like what he said a week ago.

‘I said, ‘Where did that come from in the middle of the summer?” Trump continued, referring to Goodell’s apology to players. ‘Nobody’s even asking.

‘We will never kneel to our national anthem or our great American flag. We will stand proud, and we will stand tall.’