In 2009 Pixar animation Up it was a house tied to balloons, but for this British thrill-seeker, it’s a camping chair.

Not quite as dramatic, but still impressive.

The sky’s the limit: Tom Morgan, 38, drifted nearly 16 miles through the South Africa sky and reached a height of 1.5 miles 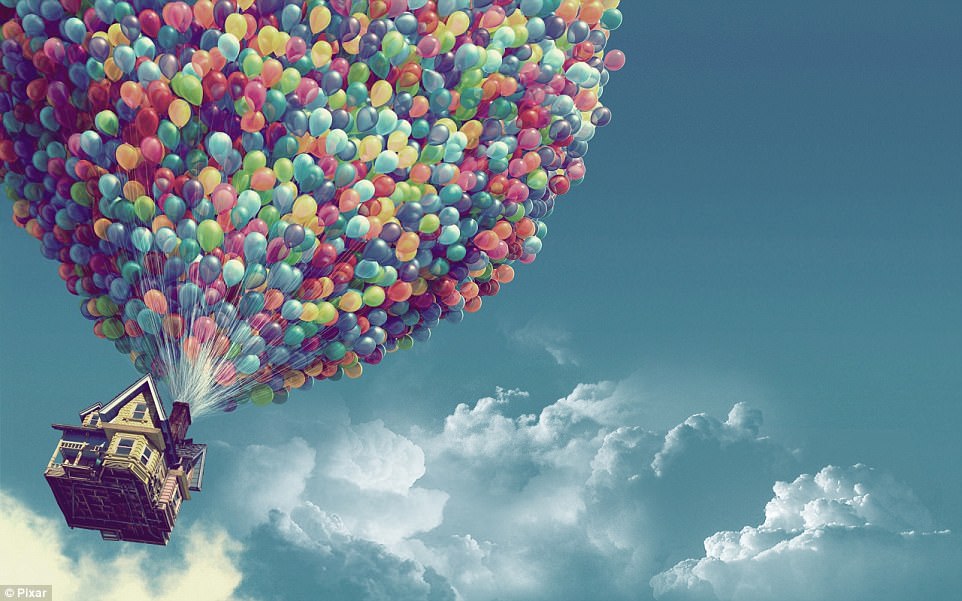 Tom’s stunt resembles scenes from Pixar animation Up, in which a house is carried along by hundreds of balloons, pictured

He had previously attempted the cluster ballooning stunt three times in Botswana before finally succeeding north of Johannesburg using the last of his helium supply.

Tom, from Bristol, said: ‘I found an article on a 1905 gas balloon race and thought “we could do that”. The problem was finding a good weather window and it was difficult to protect the balloons as they kept bursting.

‘It was completely silent and the view was amazing – the whole thing was magical but I don’t think it will be a commercial success.’

The nerve-wracking, two-and-a-half hour flight took Tom close to the approaches to Johannesburg Airport, but that was not his only concern.

He added: ‘I didn’t know what height the balloons would burst at, or what the sun would do to them. At 8,000ft they started accelerating – into the flight path.’

The brightly coloured party balloons needed 18×9 cubic metres of helium to get Tom off the ground. 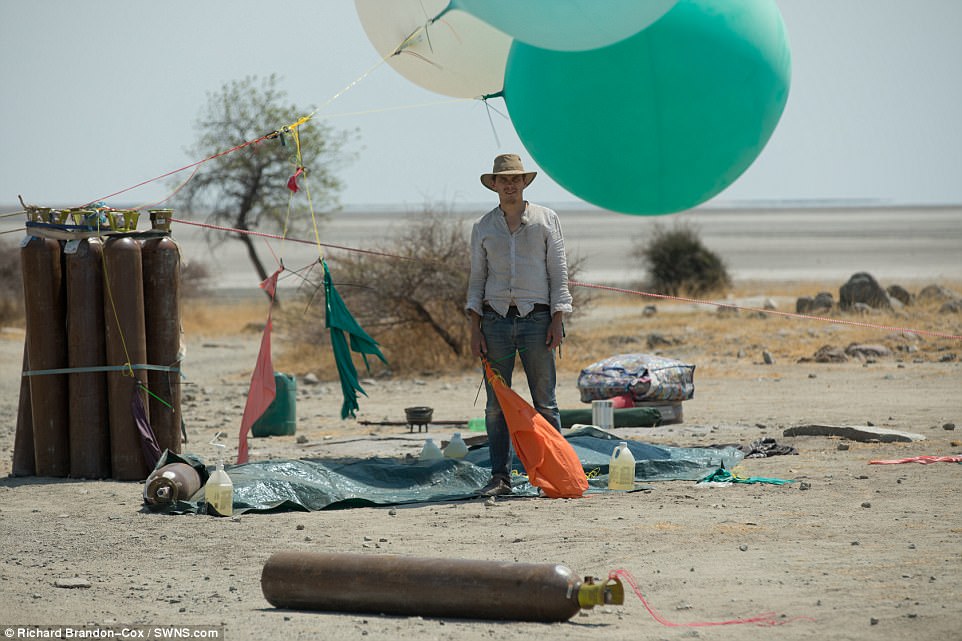 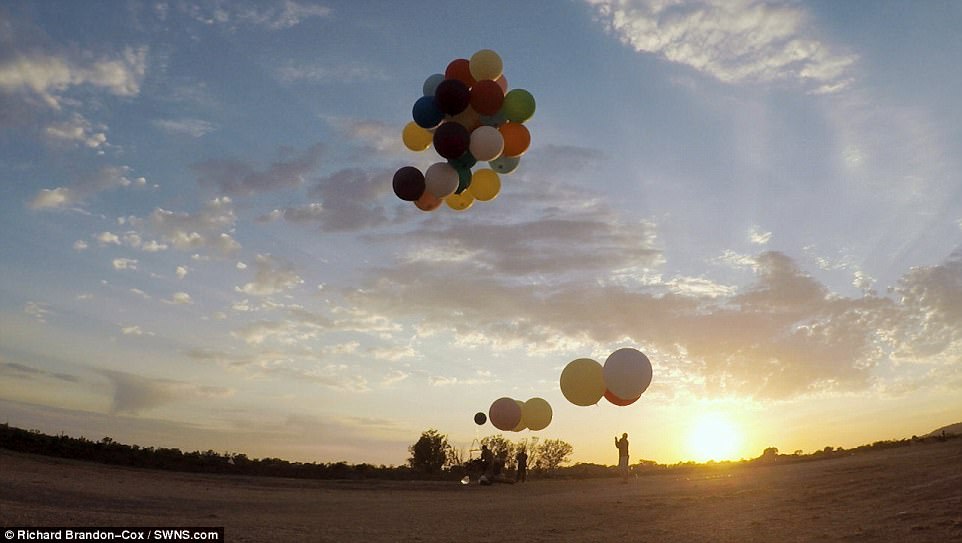 On a mission: The hair-raising attempt was organised by the thrill-seeking League of Adventurists group in Bristol

The attempt was organised by the thrill-seeking League of Adventurists group and Tom was helped by Buddy Munro and Parajet employee Kester Hayne.

Tom’s friend Matt Dickens said: ‘The guys tried three times before this in Botswana, but sadly gusts of wind shredded the balloons.

‘The last successful attempt was the last of the helium supplies, so it was literally an all or nothing attempt.’ 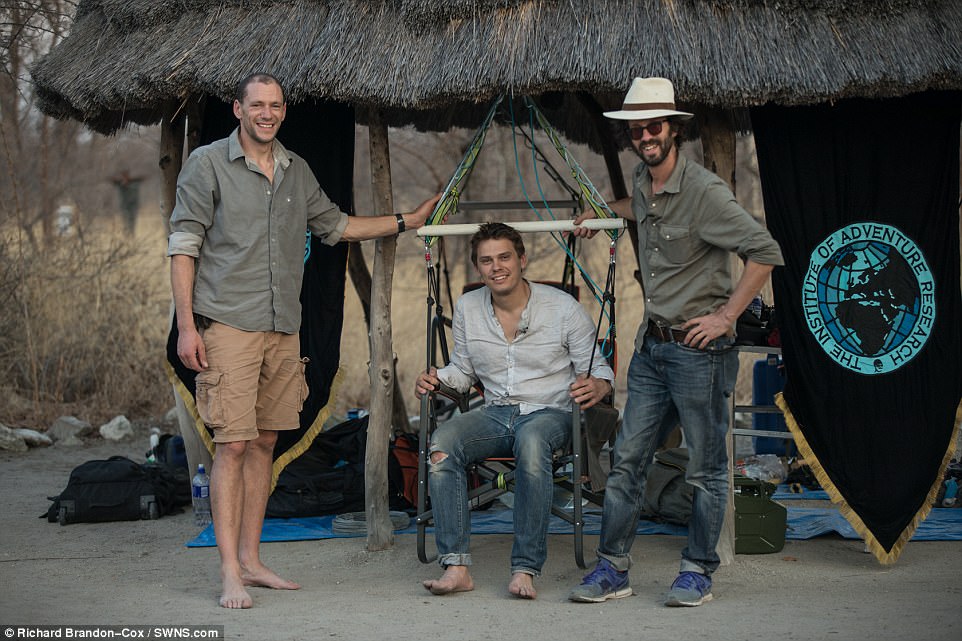 Brave: Tom Morgan sitting in the chair he was strapped into with friends who helped him get up in the sky 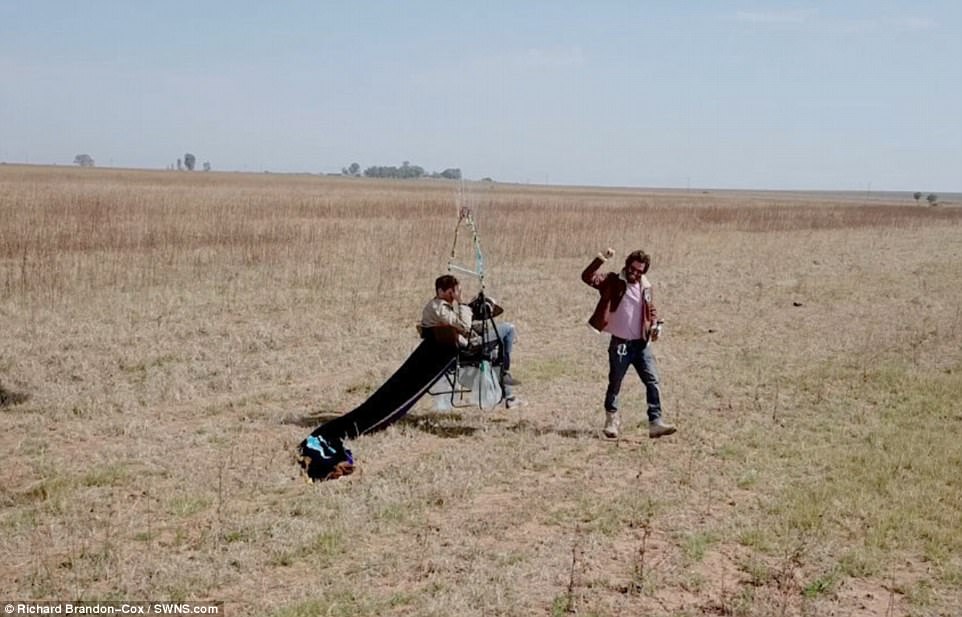 He did it! Tom Morgan lands back on the ground in his chair after the successful stunt 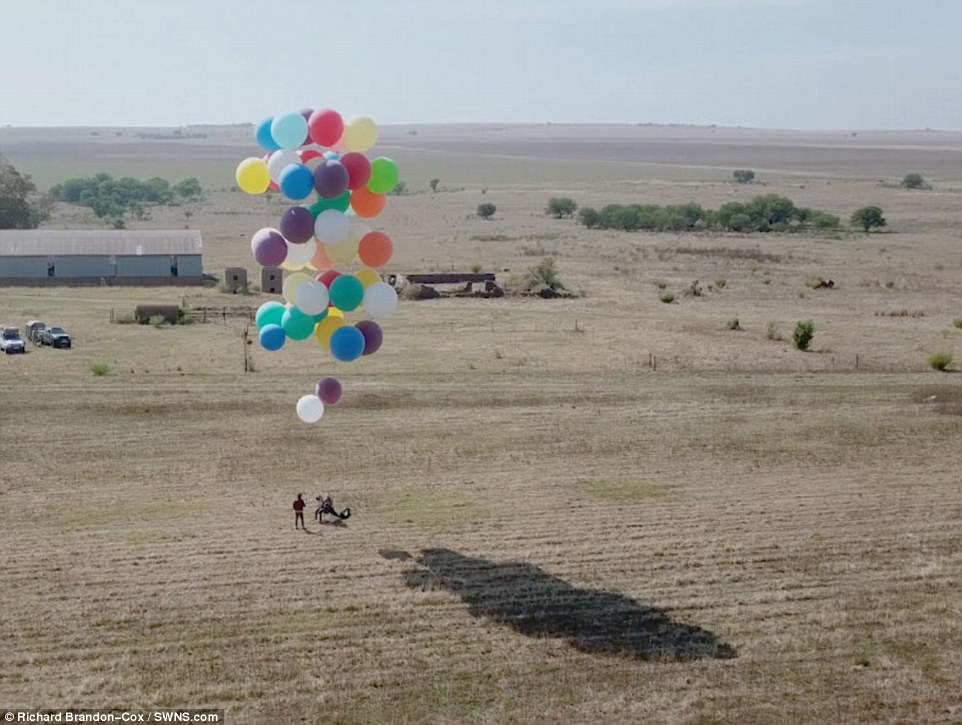 They’ll certainly spot him coming! The eye-catching collection of balloons could surely be seen from miles away 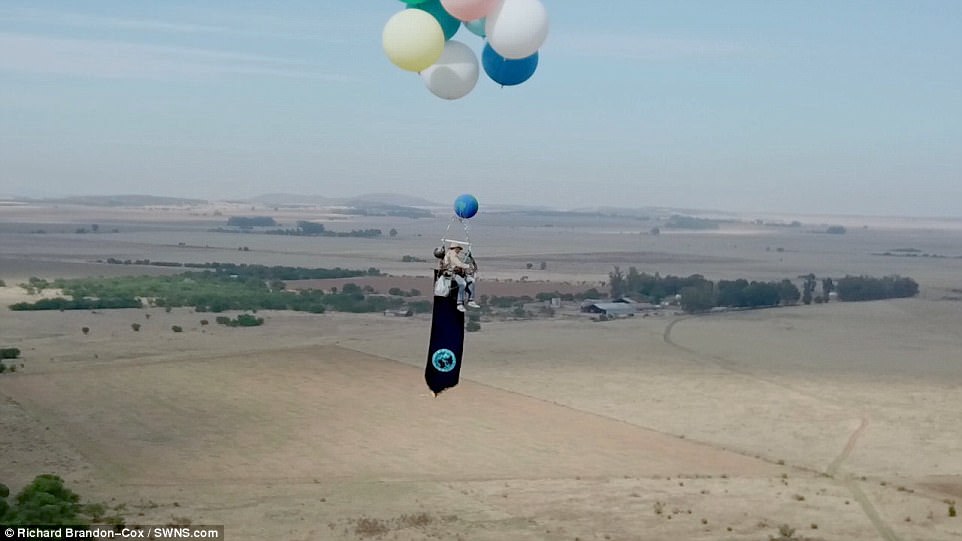 Action shot: Strapped into his chair, Tom can be seen navigating the skies above the plains of South Afrcia 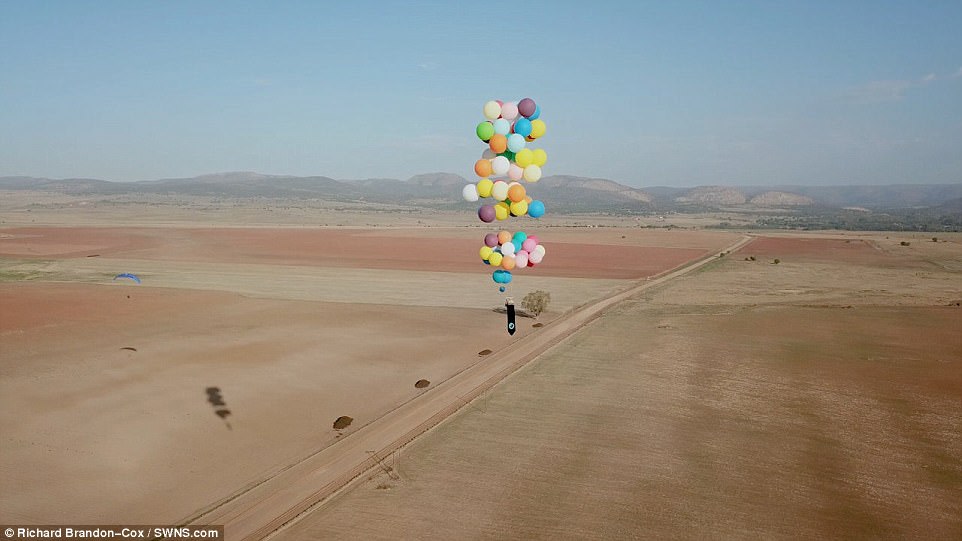 Power: The brightly-coloured party balloons needed 18×9 cubic metres of helium to get Tom- and his chair – off the ground 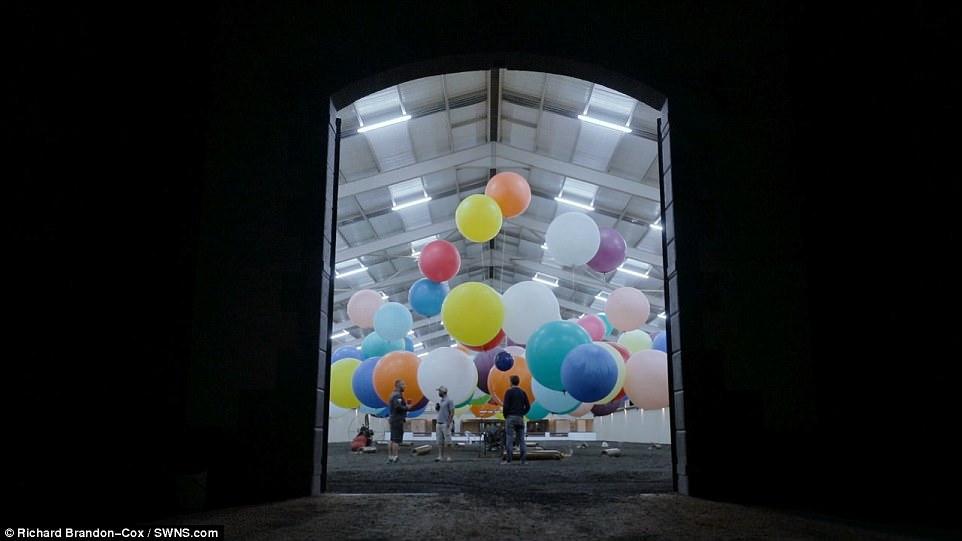 He added: ‘Tom has been harping on about doing something with balloons for a few years now so. If something had gone horribly wrong it would have been pretty permanent.

‘There was a priest from South America who did it a few years ago and he went too high and didn’t come back.

‘It wasn’t really inspired by the film Up – there are many similarities but Tom has been wanting to do something like this for a lot longer. It’s nice for him that he has finally fulfilled his dream. When he wanted to come down he had to cut a few balloons.’

The League of Adventurists, based in Bristol, was formed 12 years ago and members now plan to introduce a competition based on cluster ballooning. 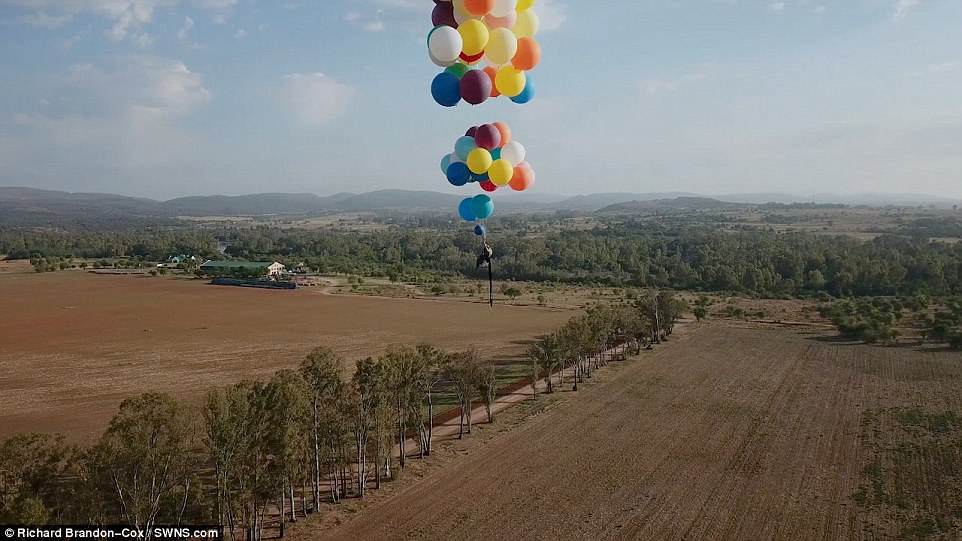 Riding high: Although his caper has similarities to the film Up, the trio of men insist it wasn’t inspired by the Pixar animation 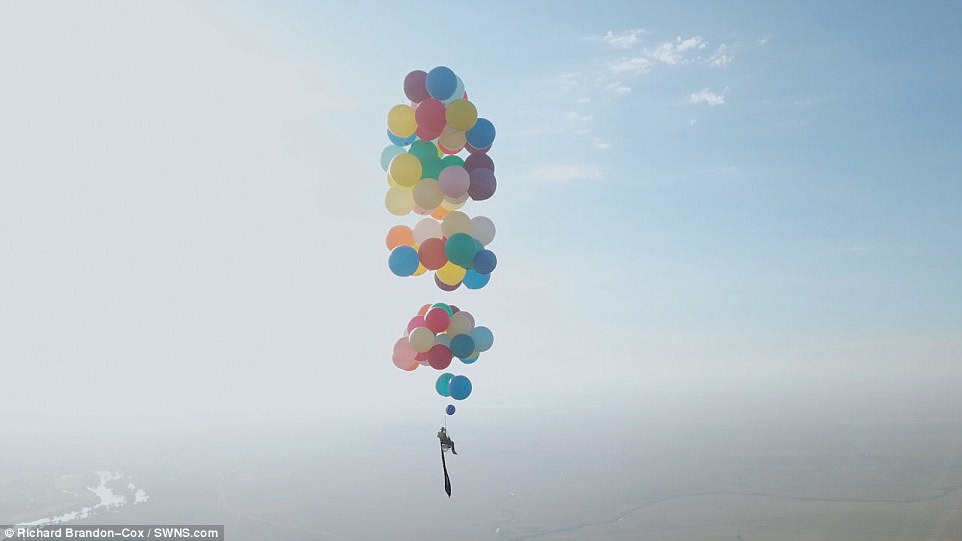 He must be on cloud nine: Soaring at 8,000ft above the ground, Tom has dazzled people with his bold air adventure 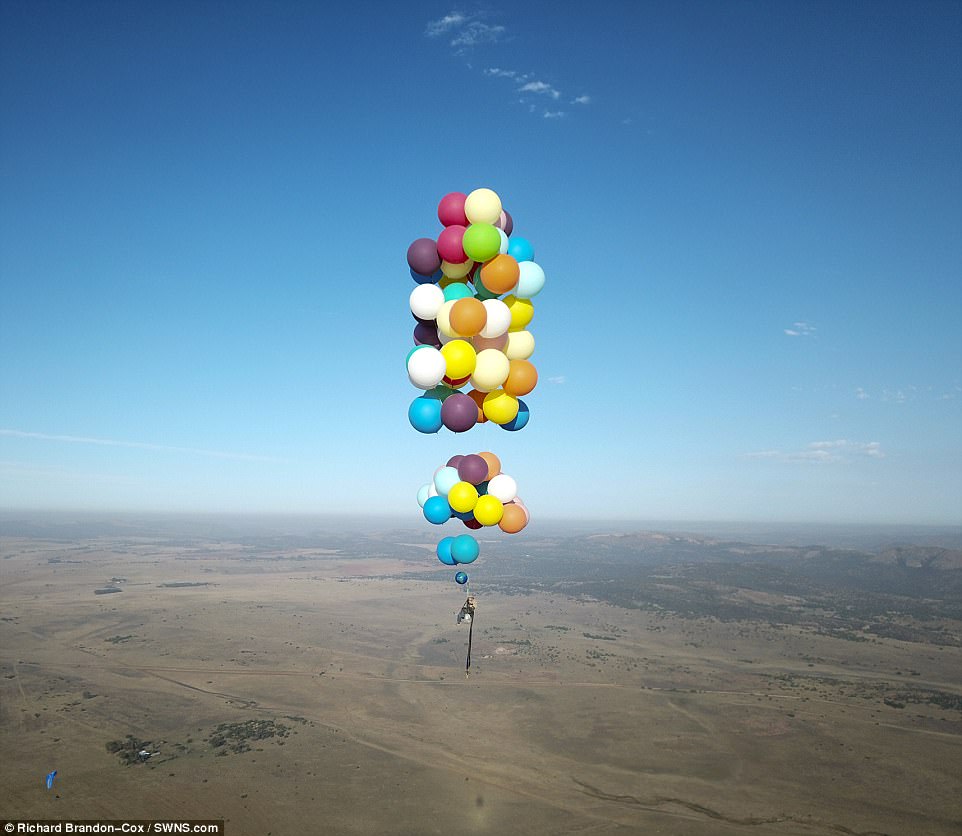