By Kamal Sultan For Mailonline

Opera legend Placido Domingo on Sunday received a standing ovation at the Salzburg Festival, his first performance since he was accused of sexually harassing women.

‘Triumph in Salzburg, standing ovation for Domingo despite the Me Too affair,’ a headline in the regional daily Kleine Zeitung said, following his performance in the Giuseppe Verdi opera ‘Luisa Miller’ at the annual music and drama festival in Austria.

Domingo is said to have received a standing ovation alone at the start of show and then shared another with cast-mates at the end.

Placido Domingo, 78, (pictured left) received a standing ovation at the Salzburg festival. It was his first performance since nine women accused him of sexual harassment 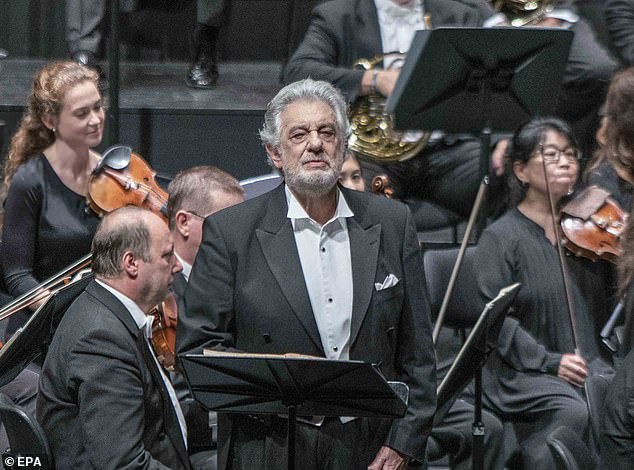 Eight singers and a dancer told the Associated Press earlier this month they were sexually harassed by the former member of the much lauded ‘Three Tenors’, in incidents going back to the 1980s.

In a report by the AP, several women, one of whom was identified, accused Domingo of using his position as one of opera’s most celebrated singers to pressure them into sexual relationships.

One accuser said Domingo stuck his hand down her skirt and three others said he forced wet kisses on their lips in a dressing room, a hotel room and at a lunch meeting.

Domingo denied the accusations and said: ‘Still, it is painful to hear that I may have upset anyone or made them feel uncomfortable.’

Dozens of other people in the business claimed they saw him being sexually inappropriate with younger women.

The Los Angeles Opera has opened an investigation into the ‘concerning allegations’.

Following the claims, the Philadelphia Orchestra Association withdrew its invitation for Domingo to appear in its opening night concert on September 18.

However, the head of the Salzburg Festival in Austria said Domingo would perform there as planned. 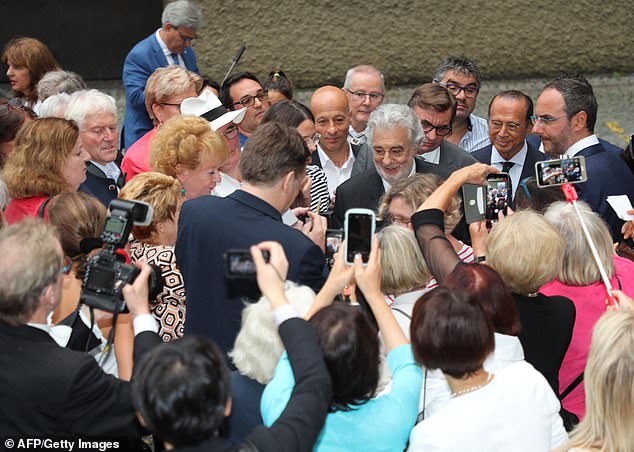 Most of his 21 planned performances in Europe through to November 2020 have been confirmed.

Some colleagues have defended him and said they refused to ‘rush to judgement’.

Madrid-born Domingo was one of the most recognised tenors of the 20th century, starring in alongside famous tenors Luciano Pavarotti and Jose Carreras.

In recent years the long-time married opera star has transformed himself into a baritone and still performs to packed audiences at the age of 78.

He has made more than 100 albums and picked up 14 Grammy awards. Earlier this year, he celebrated his 4,000th performance in a career that stretches back 60 years.