Plan to send migrants to Rwanda should be stepped up after surge in Albanians coming to UK, MPs say

Plan to send migrants to Rwanda should be stepped up amid reports of a surge in Albanians crossing Channel in dinghies, MPs say

By David Barrett Home Affairs Editor For The Daily Mail

MPs tonight called on ministers to redouble their efforts to deport migrants to Rwanda following a surge in Albanians using small boats to enter Britain.

Leaked figures have revealed migrants from the Balkan country – a Nato member that wants to join the EU – now make up four in ten arrivals from northern France.

The escalation saw 1,075 Albanians arrive in the UK aboard dinghies and small boats in the six weeks to July 12.

They made up 37.5 per cent of all migrants trafficked to the UK in small boats by gangs during the period – eclipsing all other nationalities including Afghans, Iranians, Iraqis and Syrians.

Tory backbenchers called on the next prime minister to act urgently. Natalie Elphicke, Tory MP for Dover, said: ‘It’s clear many Albanians coming to the UK in small boats are not fleeing from war or persecution – they are economic migrants. This is blatant criminality and it underlines the urgency of getting on with Rwanda and similar schemes.’

Leaked figures reveal 1,075 Albanians arrived in the UK aboard dinghies and small boats in the six weeks to July 12. They made up 37.5 per cent of all trafficked migrants during the period 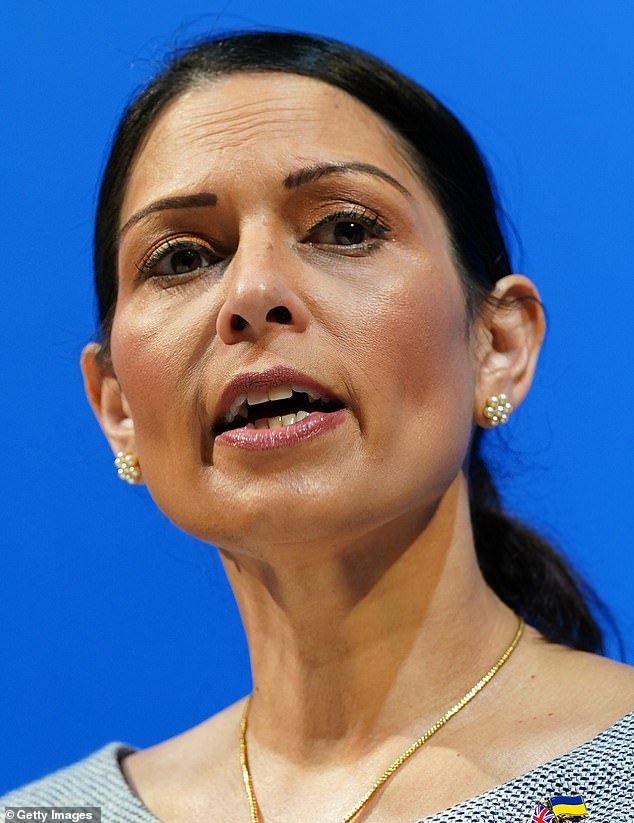 The Rwanda scheme was championed by Home Secretary Priti Patel

Tom Hunt, the Tory MP for Ipswich, said the ‘truly eye-opening’ figures ‘underline why it’s so critical that the Government gets on and introduces the Rwanda scheme’, adding: ‘We need to bring this farce to a close. Legislation to bring the Rwanda scheme to fruition should be top of the “in tray” when Parliament gets back after summer recess.’

A source in Liz Truss’s leadership campaign said: ‘Liz has a plan to expand border force, ensure the European Convention on Human Rights works for Britain, and reform modern slavery laws which are being abused. The need for deterrence is key, which is why we will ensure the migration deal with Rwanda works, and look to strike other deals.’

A spokesman for Rishi Sunak’s campaign said stopping crossings would be a top priority for him, adding: ‘It is wholly unacceptable that migrants from peaceful countries, like Albania, are trying to enter the UK illegally.’ 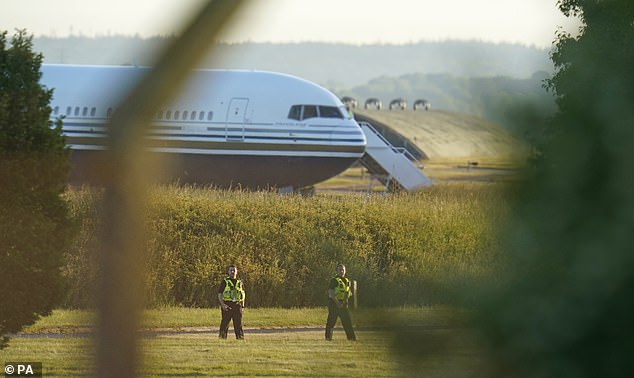 Police officers near the Boeing 767 aircraft at MoD Boscombe Down, near Salisbury, which failed to take off to Rwanda on June 14

The Archbishop of Canterbury has urged Anglican bishops to speak out against ‘unethical treatment’ of migrants and climate change.

In his latest highly political intervention, Justin Welby encouraged Church of England leaders to ‘take risks’ and warned that failing to act would make them ‘one of the oppressors’.

Describing climate change as an ‘undeclared war’, the former oil executive warned it could create 1.2billion refugees with consequences ‘tragic beyond anything in human history’.

‘To be silent on the unethical treatment of migrants or on war or oppression, on the abuse of human rights, on persecution, is to be one of the oppressors,’ he told the Lambeth Conference of Anglican bishops. ‘Not so much nowadays, I think both the Cabinet and myself would say,’ he added.

It came after the Archbishop used his Easter sermon this year to denounce Home Secretary Priti Patel’s Rwanda asylum deal, suggesting that ‘serious ethical questions’ about the plan would not ‘stand up to the judgment of God’.

The number of Albanians who arrived by small boat in the six-week period, latest official data places the country much further down the league table of arrivals.

Just 271 reached Britain by small boat in the first quarter of this year and 757 in the whole of 2021. However, there were a total of almost 5,000 asylum claims made by Albanians in the year to March, suggesting growing numbers may be switching to small boats from other methods of entering the UK, such as hiding in lorries.

The Home Office did not offer an explanation for the rise in Albanian asylum seekers last night.

Richard Tice, of Reform UK, who obtained the leaked report said: ‘If these people are not genuinely fleeing for their lives, then it is not up to the British taxpayer to support them.’

Clare Moseley, of refugee charity Care4Calais, questioned whether the Albanian surge could be an ‘anomaly’. ‘The evidence clearly shows that for the last few years the majority of people crossing the Channel were genuine refugees,’ she said. ‘If there has been a change, it seems that the success of small boat crossings is affecting the behaviour of smugglers.’

A government spokesman said: ‘The rise in dangerous Channel crossings is unacceptable. The Nationality and Borders Act makes it a criminal offence to knowingly arrive in the UK illegally and we have introduced life sentences for those who facilitate illegal entry into the country.’