A plane carrying hundreds of passengers from the coronavirus epicentre in China has landed in Sydney.

The three flights the city receives from Wuhan each week are being closely monitored, starting on Thursday, as biosecurity staff at Sydney Airport assess any arrivals who feel unwell.

One international student from Wuhan, who asked not to be named, told Daily Mail Australia he was quizzed by officials on the way in to the airport.

‘A group of doctors wearing masks asked me if I had a cold and if I felt unwell, which I didn’t,’ he said.

‘They checked my temperature and then let me through. I got lucky because I’m on the last flight out of Wuhan.’

‘The situation isn’t that bad there, it’s not as bad as all the scare stories.’

A number of Australians have been tested for the virus which has led to 17 deaths from about 524 cases in China. Cases have also been confirmed in Japan, Thailand and South Korea.

Biosecurity measures have been ramped up for flights arriving into Australia from China and Wuhan in particular.

The Chinese city of Wuhan was placed under quarantine on Thursday in an effort to stop the spread of the killer coronavirus believed to have originated there.

No one will be allowed to enter or leave Wuhan, a city of 11 million in China’s Hubei province, as one of the country’s busiest travel seasons surrounding the Lunar New Year kicks off. 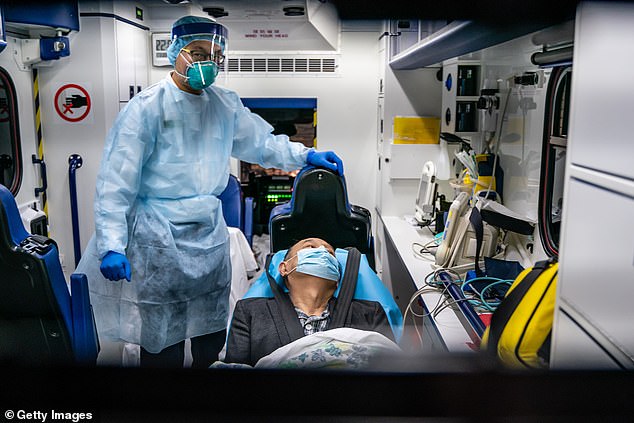 A patient is transferred by an ambulance to the Infectious Disease Centre of Princess Margaret Hospital on January 22, in Hong Kong, China

A flight from the Chinese city of Xian via Wuhan is due to arrive at 11.35am on Thursday.

The crack team will include four NSW Health doctors and nurses experienced in public health and infection control alongside virology experts from Westmead Hospital and elsewhere.

The team will wear masks and gloves when examining anyone with symptoms, NSW Health protection executive director Jeremy McAnulty said.

‘If it looks like they may have an infection … we can arrange for testing and management of that person right away,’ Dr McAnulty said. 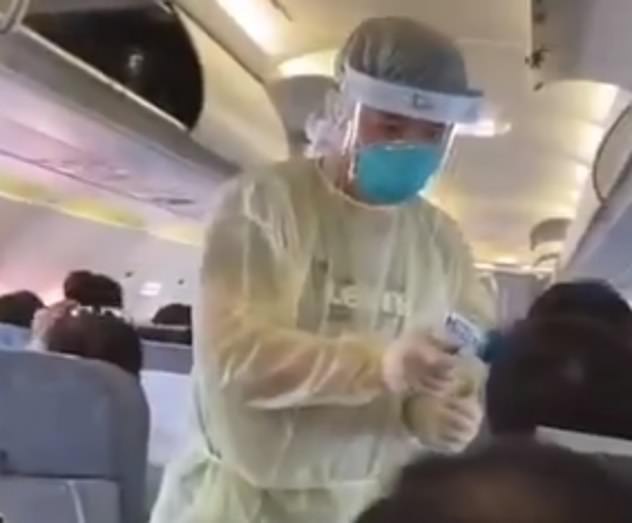 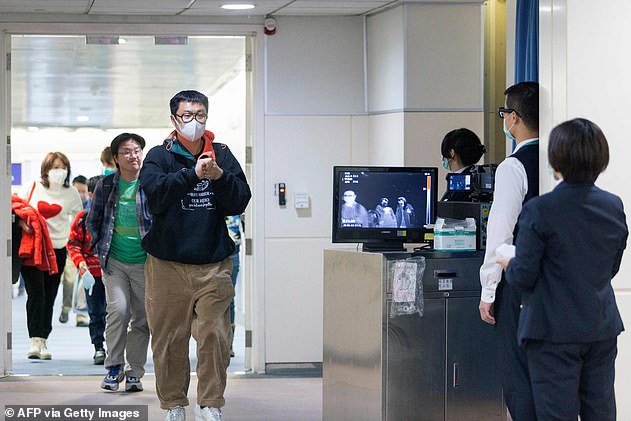 Experts at Westmead Hospital can rapidly diagnose patients although if someone is very unwell they could be taken to a hospital closer to the airport.

Dr McAnulty said identifying potential carriers at the airport was ‘not foolproof by any means’ because people who’ve been exposed to the virus may not display symptoms for days.

The virus is thought to have spread into humans from a Wuhan seafood market ‘which illegally traded wild animals’ before travelers carried it to at least five other countries – Thailand, Taiwan, South Korea, Japan and the United States.

World Health Organization (WHO) officials met Wednesday to decide whether to declare the outbreak a ‘public health emergency of international concern’, but members’ opinions were ‘split’ and the committee will reconvene Thursday.

Experts say its possible up to 10,000 people in China alone have been exposed to the virus, called 2019-nCoV, which is from the same family that caused previous outbreaks of SARS and MERS, killing hundreds of people in dozens of countries. 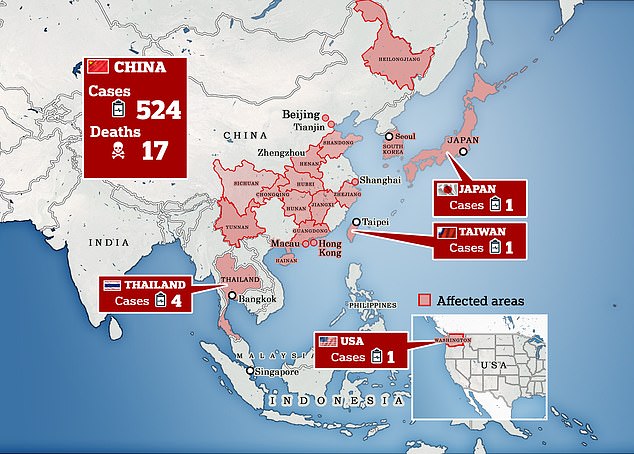 The virus, an as-yet unnamed variant of the coronavirus, was first detected in Wuhan, China last month but has now breached China’s borders

China’s National Health Commission said the virus had been mutating, making it more difficult to control.

China’s Wuhan, which is the epicentre of the coronavirus, will temporarily shut down airport and train stations for outgoing passengers as authorities attempt to control the spread of the virus.

Residents have been urged not to leave the city, however, as it is the Lunar New Year holiday many will be planning trips. 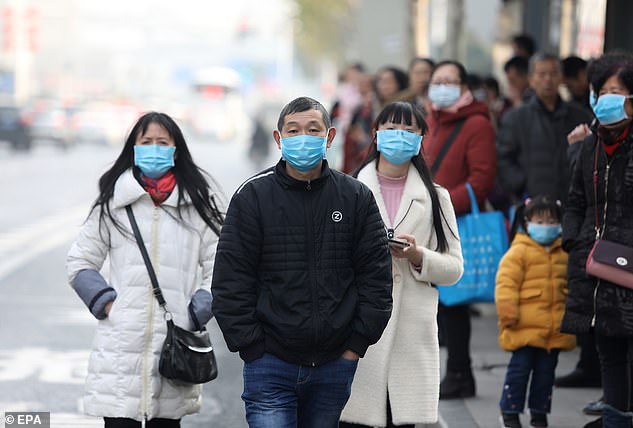 Chinese residents wear masks while waiting at a bus station near the closed Huanan Seafood Wholesale Market, which has been linked to the outbreak that started in December

‘We do have a lot of traffic from China and I think it’s quite likely we will get some cases here but I’m very ­confident that we’re well ­prepared to respond if we do,’ he told the Herald Sun.

Australia’s foreign affairs department said anyone travelling to Wuhan should ‘exercise a high degree of caution’ while in the city.

Health Minister Greg Hunt said authorities had powers to take those who may be suffering from symptoms directly to hospital.

‘But we expect that any passengers that do have issues will self-report because it’s in their own interests,’ Mr Hunt said.

Queensland Health on Wednesday confirmed a man who had been isolated after returning from visiting family in Wuhan did not have the virus.

WHAT DO WE KNOW ABOUT THE CORONAVIRUS OUTBREAK SO FAR?

A total of 532 people are confirmed to have caught the unnamed coronavirus, which has never been seen before. Seventeen patients have died.