The Royal International Air Tattoo marked 70 years of Nato with a flypast of eight nations over RAF Fairford during a colourful final day of the event.

Fighters and aerial refuelling jets provided a fitting tribute to the alliance – which safeguards the freedom and security of its 29-member nations.

The flypast was led by RAF Eurofighter Typhoon fighters and featured Lockheed Martin F-16 Fighting Falcons from Belgium, Denmark, the Netherlands and Norway. There was also Eurofighter aircraft from Germany.

Although many of the aircraft operated from RAF Fairford, others flew directly from their bases in the UK and in France.

Six of the nations represented in the flypast were among the 12 founder members of Nato.

An Air Tattoo spokesman said: ‘What a sight to see so many nations coming together to mark the anniversary of such an integral alliance.

‘Not only is it an opportunity for us to pay tribute, it also creates opportunities to further strengthen and create relationships through airpower.’

Red, white and green smoke in the colour of the Italian flag was pumped out from the Frecce Tricolori’s engines as the airshow came to a close on Sunday 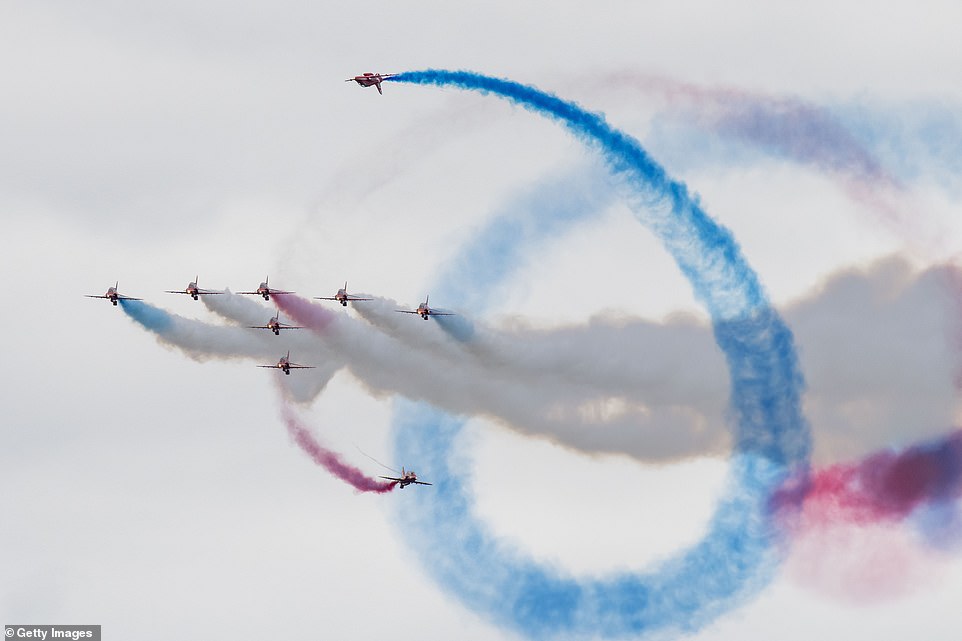 The Royal International Air Tattoo marked 70 years of Nato today with a flypast of eight nations over the RAF base. Pictured: Two of the Red Arrows loop around the main pack during their performance 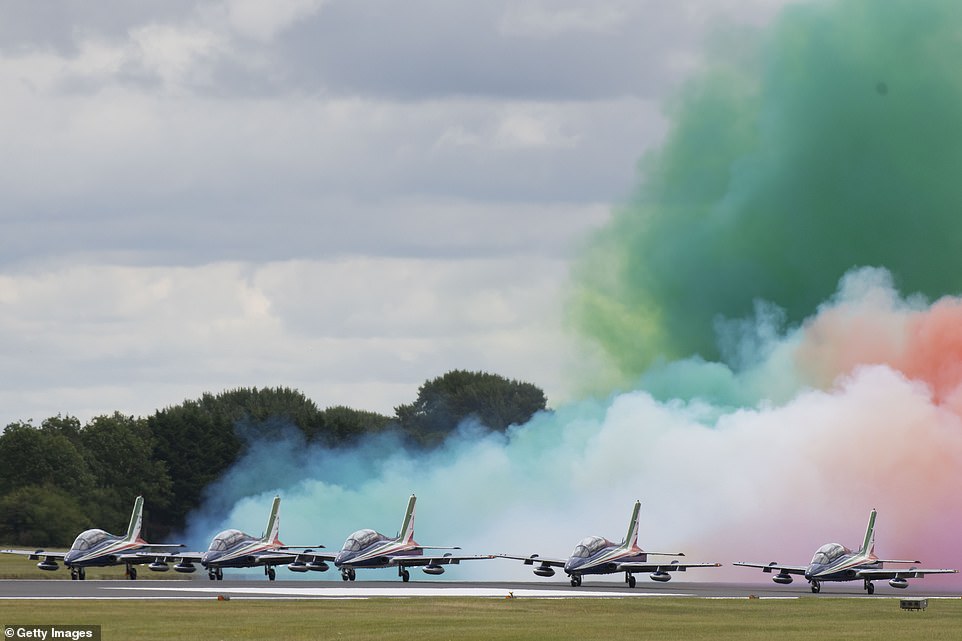 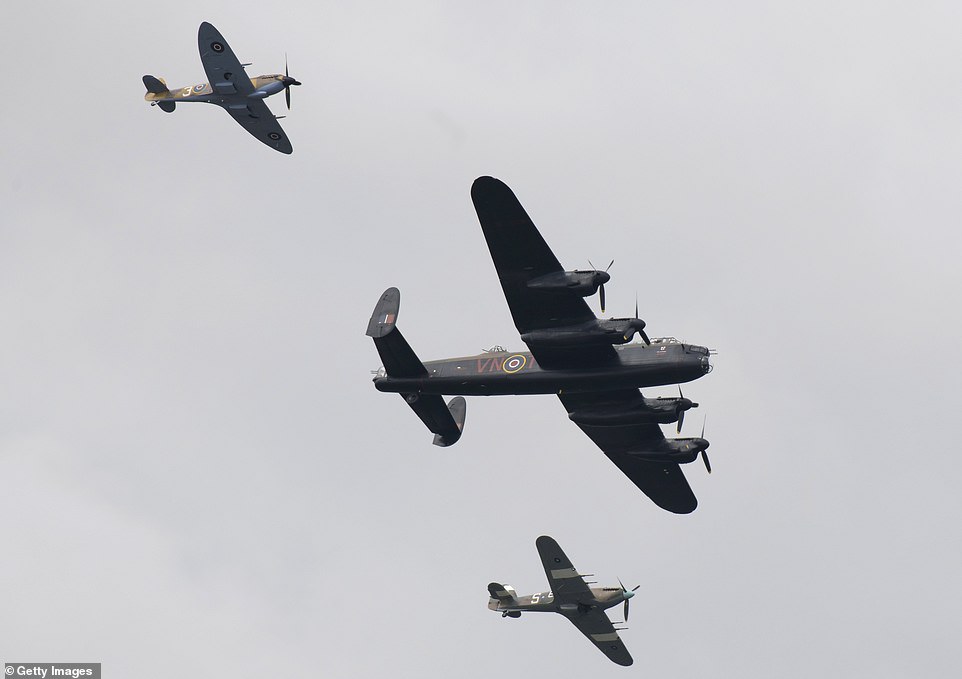 During the Battle of Britain Memorial flight, a Lancaster bomber (centre), a Spitfire (left) and a Hurricane took to the skies at around midday. They seemed to draw emotional responses from the crowd, with one woman tweeting: ‘I’m not crying, you’re crying’ 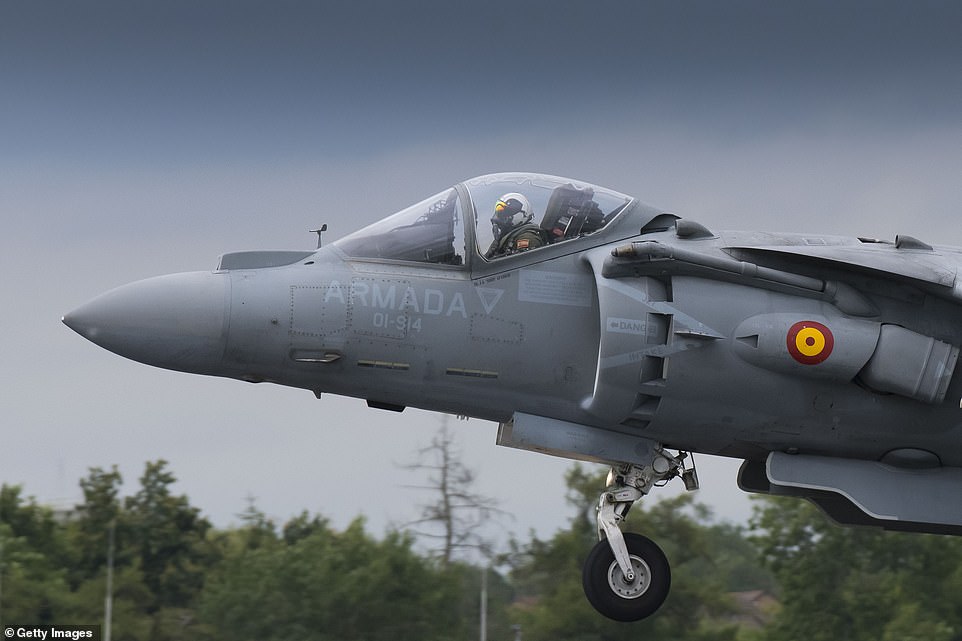 A Spanish Navy EAV-8B Harrier II takes off. The Squadron has clocked up more than 50,000 flight hours with the plane since the model was rebooted in 1996. The Spanish Navy intends to continue upgrading its ‘Harrier’ squadron with better versions in order to keep the tactical asset fully operational. But the sight of the jet may have raised eyebrows at the event, after tensions between the UK and Spain have been strained over the Gibraltar. In May, the relationship between the two countries came close to boiling point as the Royal Navy intercepted a Spanish vessel which had entered the territory of the British Overseas Territory 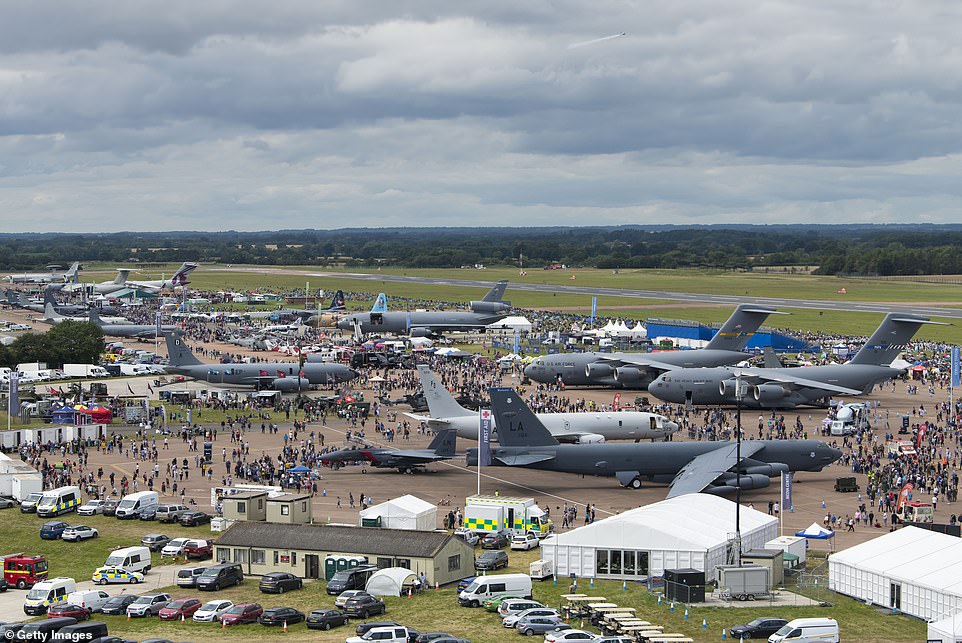 As many as 170,000 people visited RAF Fairford during the three-day event – which is the world’s largest military air show. Today, fighters and aerial refuelling jets provided a fitting tribute to the Nato alliance – which safeguards the freedom and security of its 29-member nations 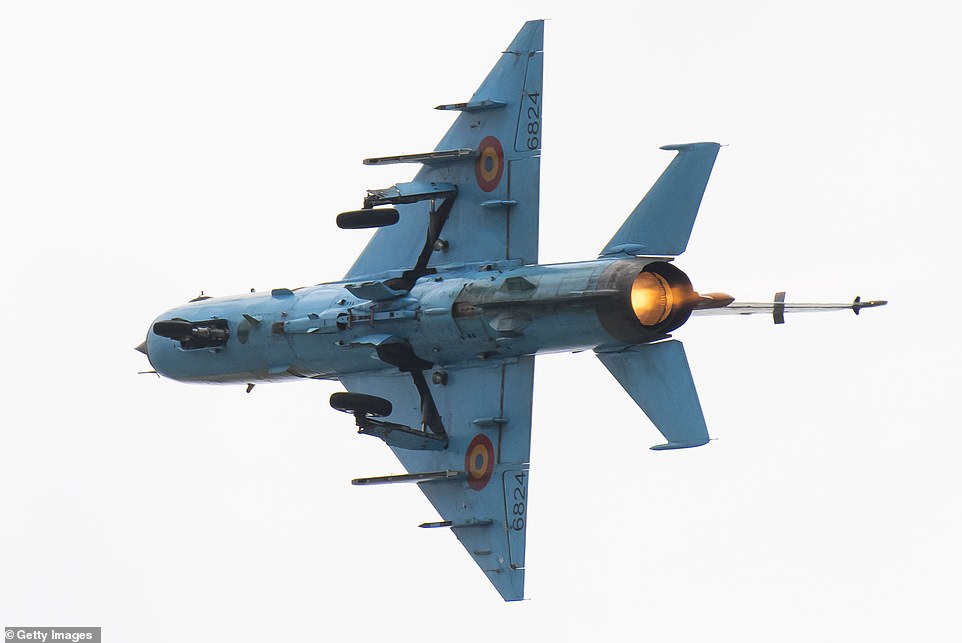 A Romanian Air Force MiG-21 LanceR is pictured during its performance. Romania is one of a handful of nations that continue to operate the supersonic fighter and who, after the collapse of the Soviet Union, faced a shortage of spare parts out of Russia. This precipitated the modernisation of the Romanian fleet, with a total of 111 aircraft being upgraded between 1995 and 2002 and being given the LanceR designation 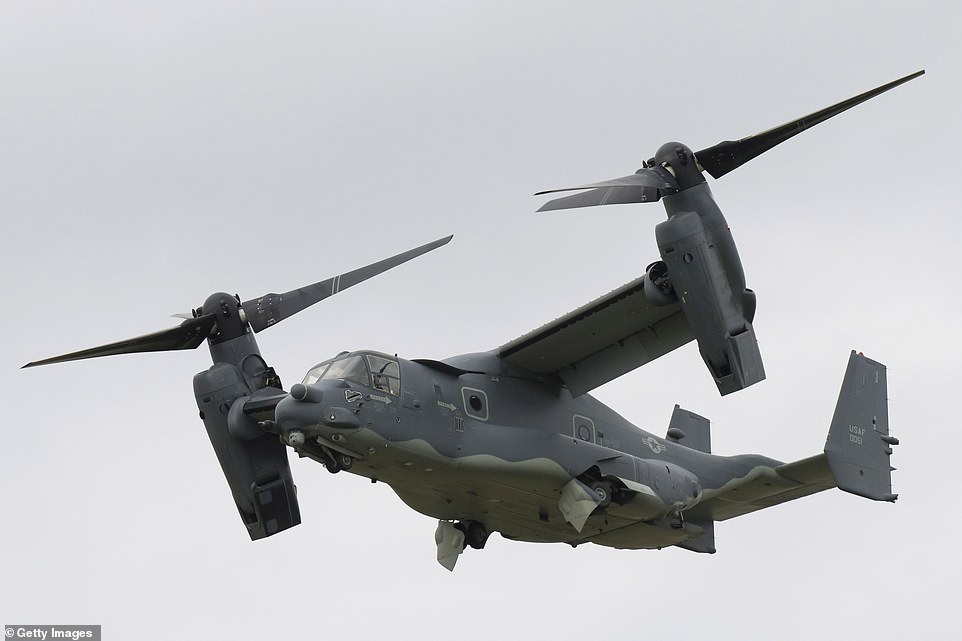 A USAF CV-22B Osprey graced the skies at around 1pm. The iconic machine takes off like a conventional helicopter then the engines rotate through 90 degrees to turn it into a fixed-wing aircraft. It can fly the distance of Hereford to London in just half an hour 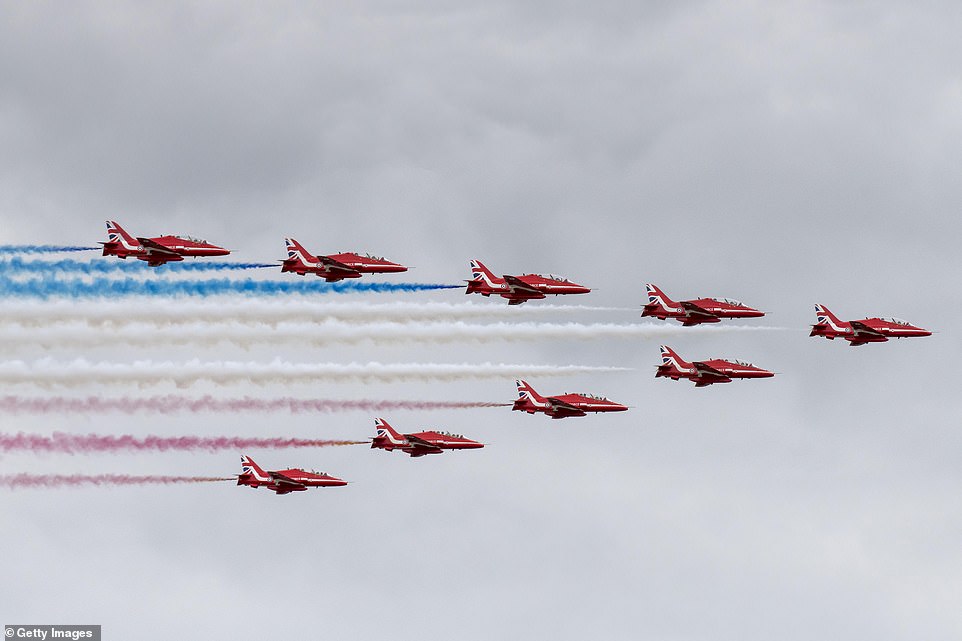 Although many of the aircraft on display operated from RAF Fairford, others flew directly from their bases in the UK and in France. The Red Arrows (pictured) made their last appearance before heading for a tour of the US 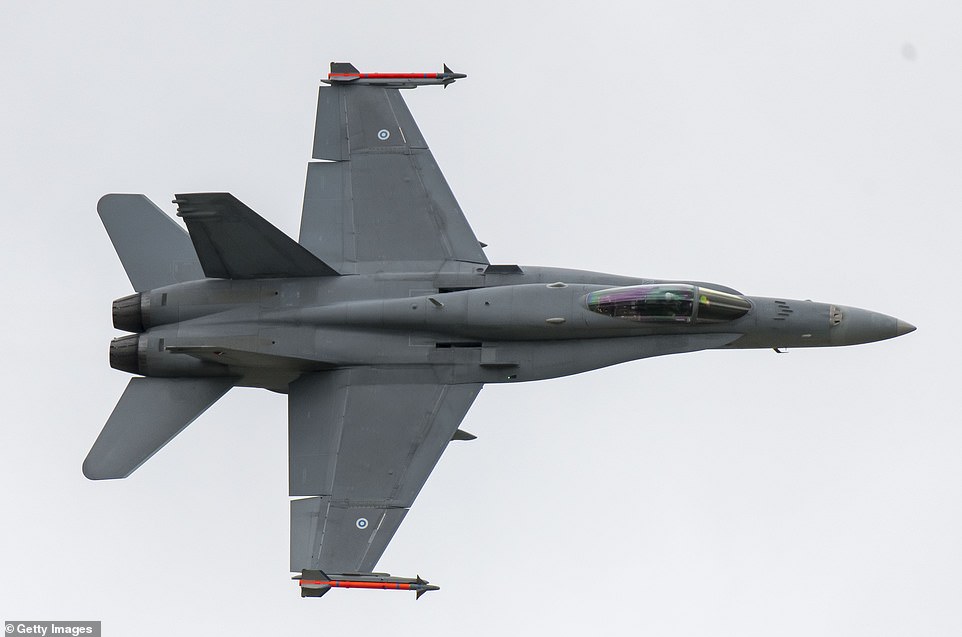 The Swiss Air Force F/A-18C Hornet barrel rolls while in flight during its display at around 4.30pm. The supersonic, multi-role combat jet is designed to carry out air-to-air missions and attack ground targets. The aircraft, which entered service with the Swiss Air Force in 1997, has had to prove itself suited to operations in Switzerland’s mountainous regions and narrow valleys as well as from the relatively short runways of its military airfields 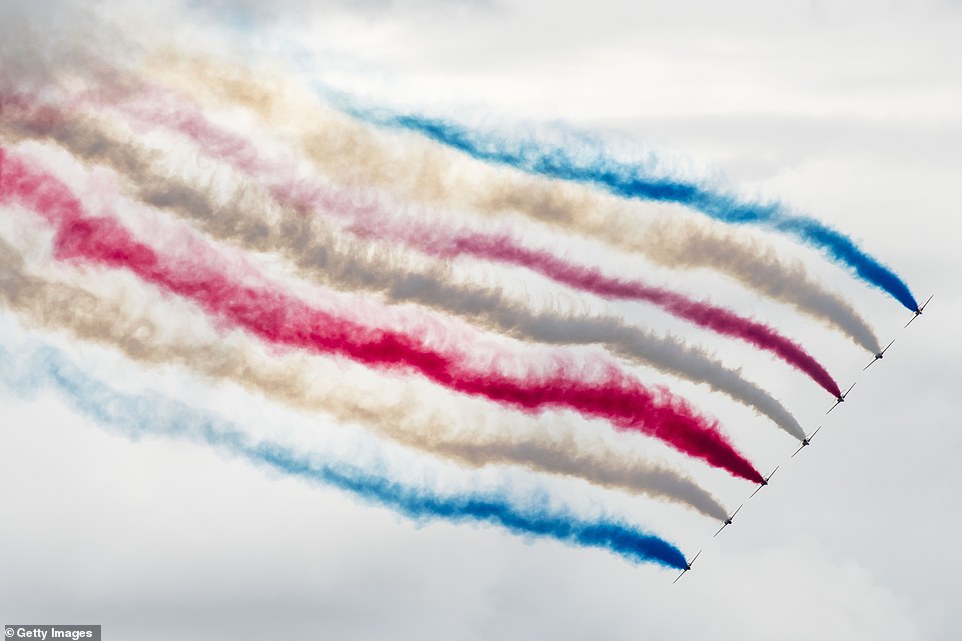 The Red Arrows paint the sky red, white and blue during the final day of the Royal International Air Tattoo at RAF Fairford, Gloucestershire, today 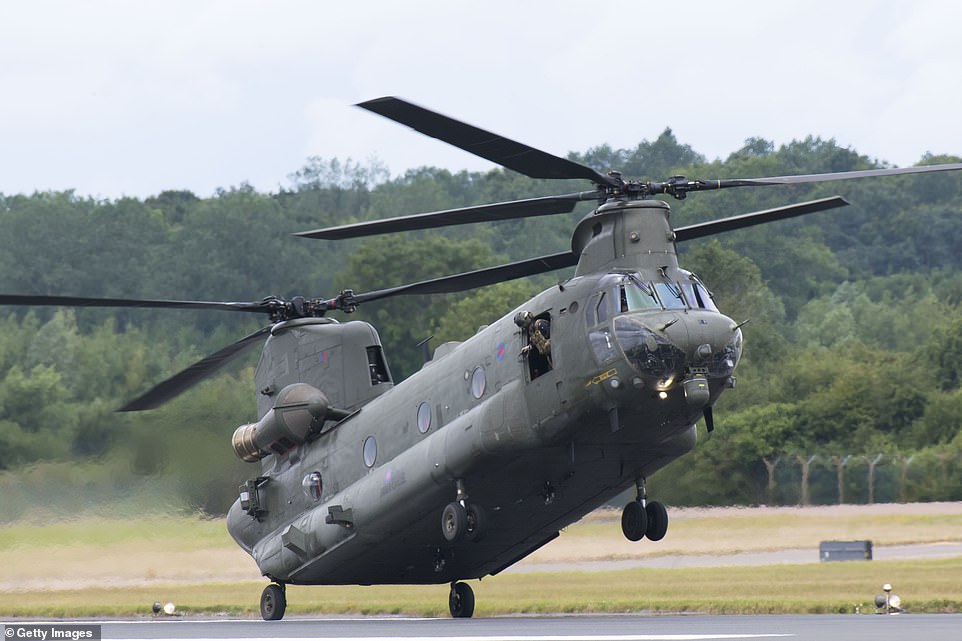 A RAF Chinook comes into land after its performance, with a serviceman watching the back wheels touch down on the runway of RAF Fairford at 11am 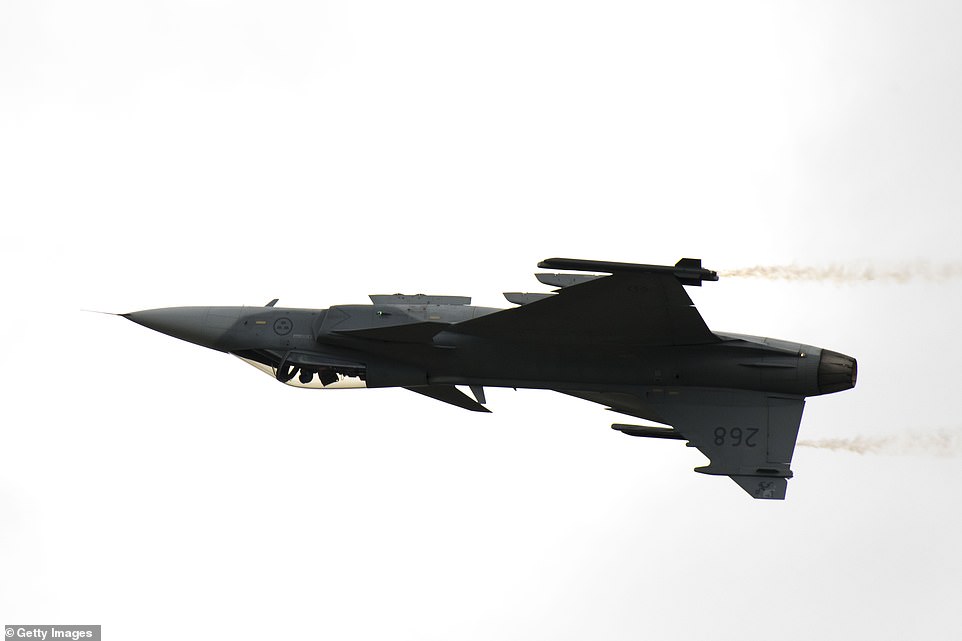 A Swedish Air Force JAS-39C Gripen upside down during the show just before 5pm. It is the latest in a long line of jet combat aircraft produced by Swedish manufacturer Saab. The ‘C’ model features a number of armament and avionics upgrades on previous types 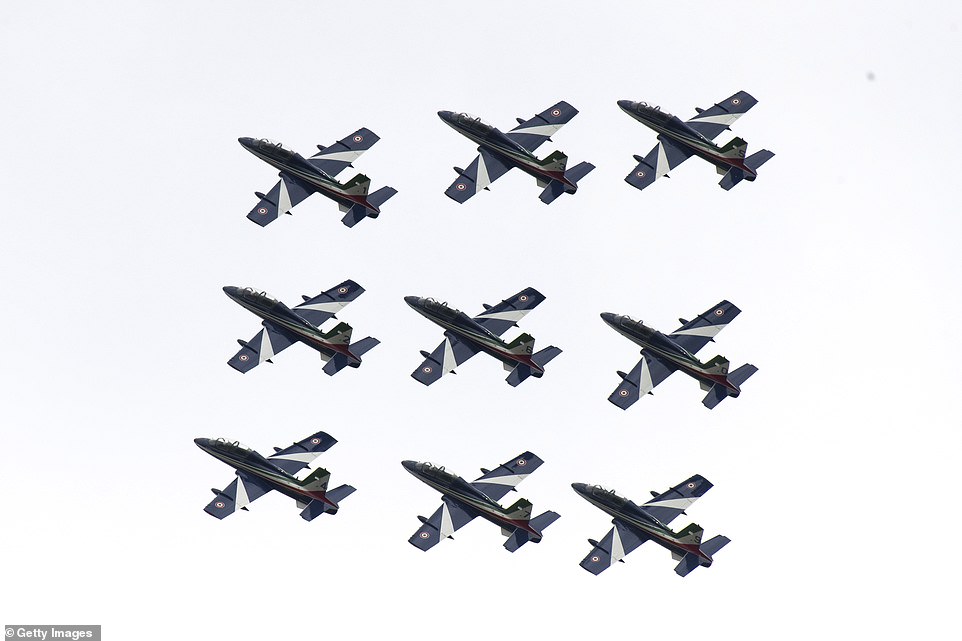 Before they lit up the sky with blasts of green, red and white, the Frecce Tricolori kept an ordered formation as the team raced through the air above RAF Fairford 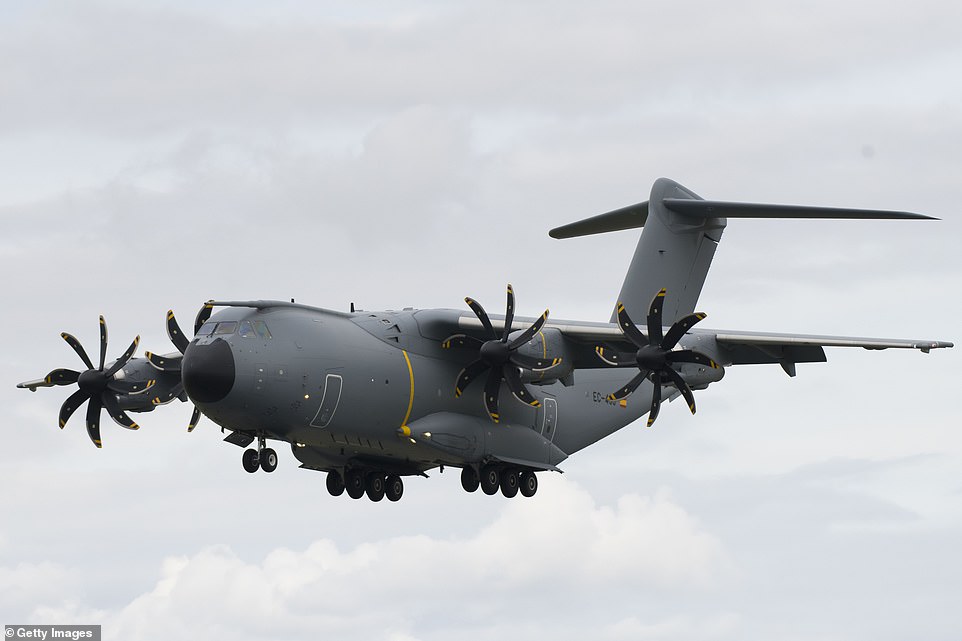 The RAF’s Airbus A400M Atlas (pictured) combines the attributes of a tactical airlifter, in being able to operate from short, unprepared strips, with the long-range strategic capabilities of heavy jet transports 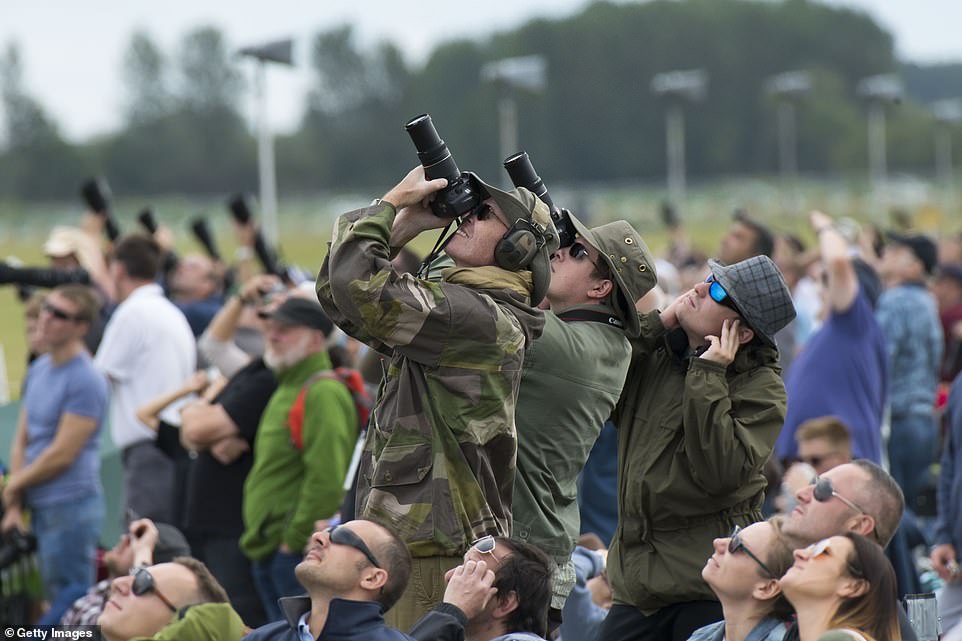 Spectators strain their necks to photograph planes high above them during the airshow, with the standout event being the Nato flypast. It was led by RAF Eurofighter Typhoon fighters and featured Lockheed Martin F-16 Fighting Falcons from Belgium, Denmark, the Netherlands and Norway 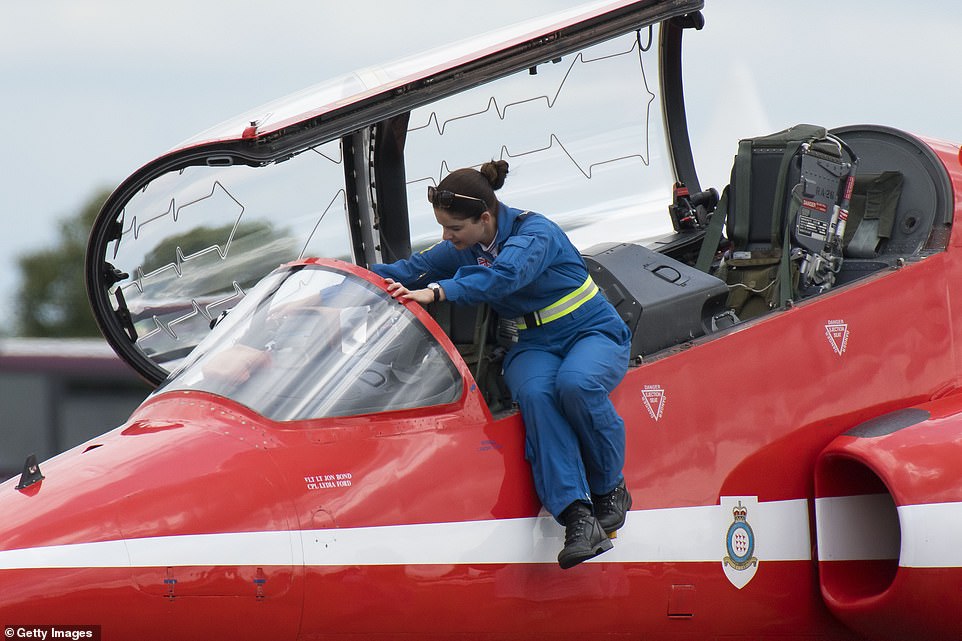 A woman prepares a Red Arrow BAE Hawk aircraft ahead of its typically colourful display. The team’s Twitter account posted after the event: ‘Privileged to display in front of a big @airtattoo crowd before the team heads to North America to represent the UK’ 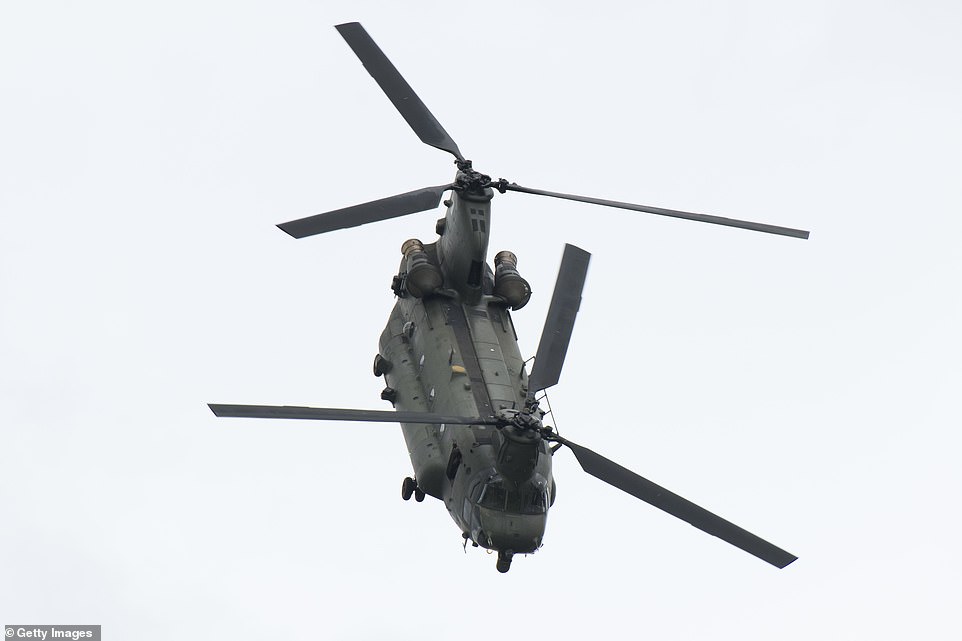 Chinooks (pictured during the display today) are heavily armed and are fitted with self-defence equipment – allowing it to operate across highly contested battle space. They are mainly used for trooping, for resupply and battlefield casualty evacuation but the crews are trained to accomplish these tasks under threat from both ground and air based enemies 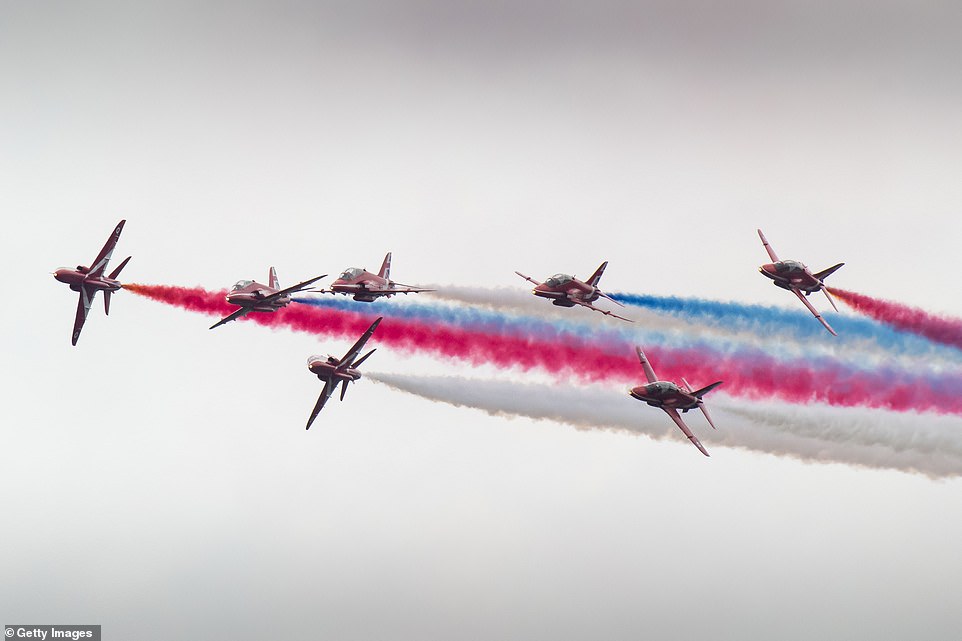 Over the three days of the airshow, spectacular aerial set pieces were staged including a unique joint flypast by the RAF Red Arrows and a specially-painted British Airways Boeing 747 jumbo jet to mark the airline’s centenary