The beachfront compound in Hawaii where former President Barack Obama plans to someday retire used a planning loophole to retain a seawall that is likely causing beach erosion, according to a new report.

State officials and community members confirmed to ProPublica that Obama plans to reside in the compound on Oahu, which was purchased for $8.7 million by his close friend Marty Nesbitt in 2015.

After tearing down the site’s mansion made famous as the house from Magnum PI, developers are building three homes, two pools and a security perimeter on the three-acre beachfront parcel, permits show.

However, the century-old seawall on the property is set to remain, despite state policies designed to preserve Hawaii’s natural coastlines and environmental experts who say such structures cause coastal damage and beach erosion.

Construction is seen underway on the property in the Waimanalo community. Officials and locals say that Obama plans to move to the compound when it is complete 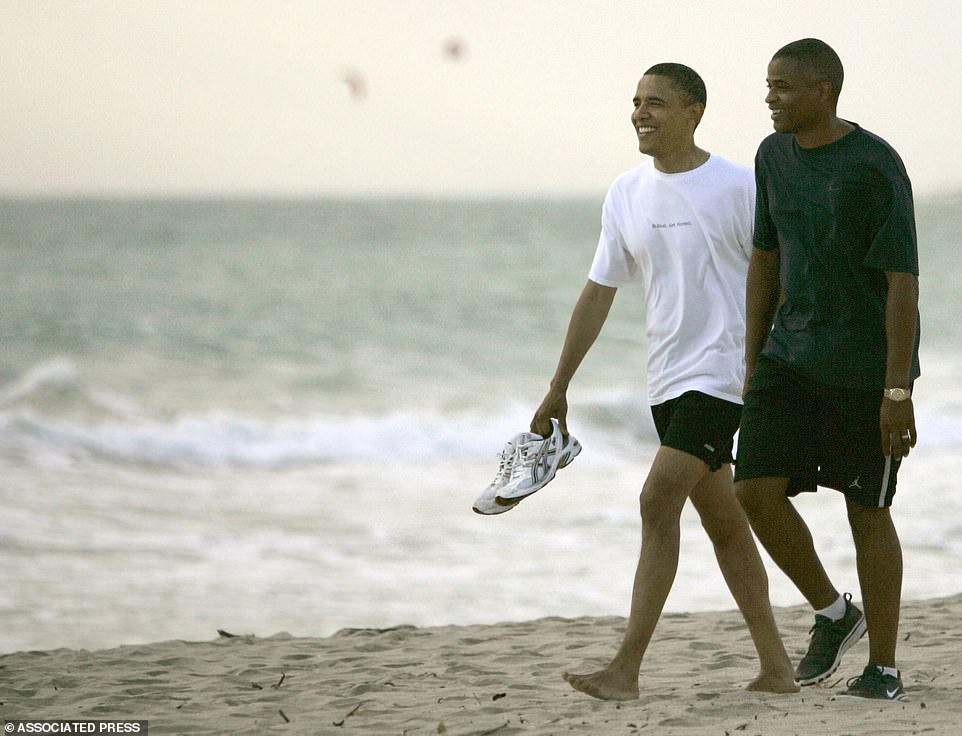 The property was purchased for $8.7 million by Obama’s close friend Marty Nesbitt in 2015. Above, the two are seen vacationing nearby on Oahu during Obama’s presidency 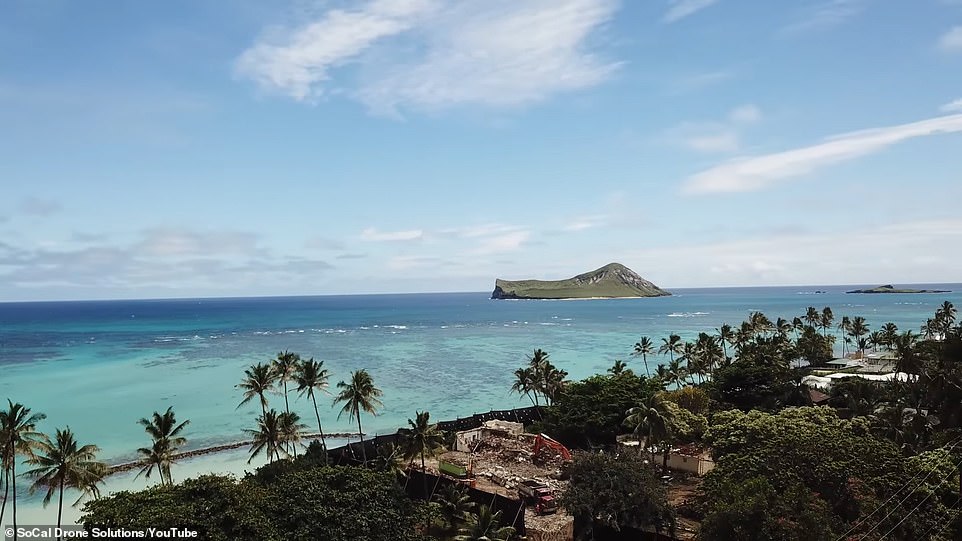 The site will have stunning views over Waimanalo Bay. Construction on the compound is still underway 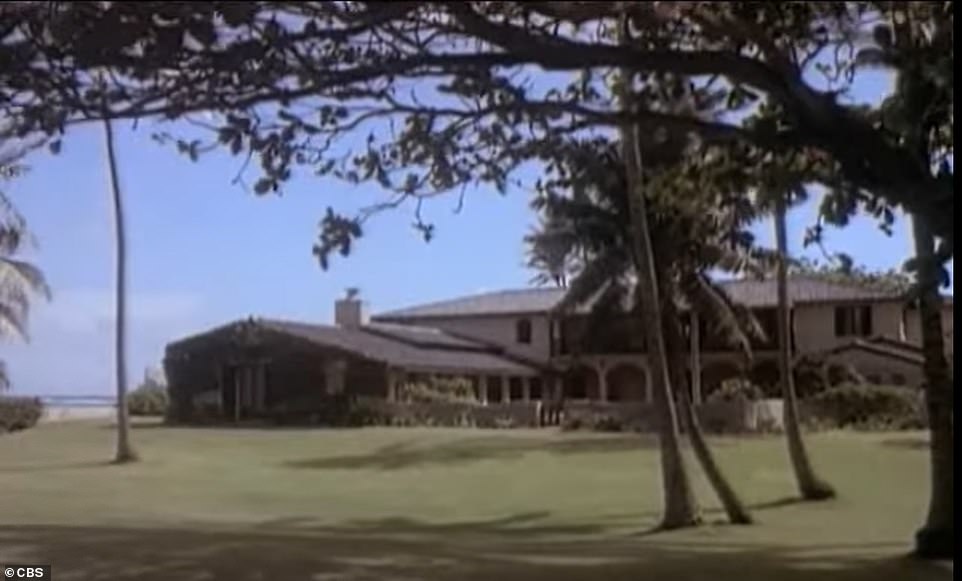 The property was formerly the site of one of Hawaii’s most famous homes, the mansion from Magnum PI (above) which was torn down in 2018 to make way for construction

The reason: a loophole that allowed the sellers of the property to obtain an easement on the seawall for a one-time payment of $61,400 before it was sold in 2015, according to ProPublica.

The easement is essentially a 55-year lease on the public land that sits under the seawall, giving the private property owner the ability to keep it.

Such easements have come under criticism in Hawaii, though they are far from rare, with some 120 being awarded over the past two decades.

The developers of the property are now reportedly pursuing an expansion of the seawall — angering community members who point out that the existing beach along the property has nearly disappeared, and who view Obama as a proponent of environmental sustainability.

The new compound is nestled in the Native Hawaiian community of Waimanalo, not far from where Obama would often spend his Christmases as president, frequently being spotted strolling or golfing with Nesbitt. 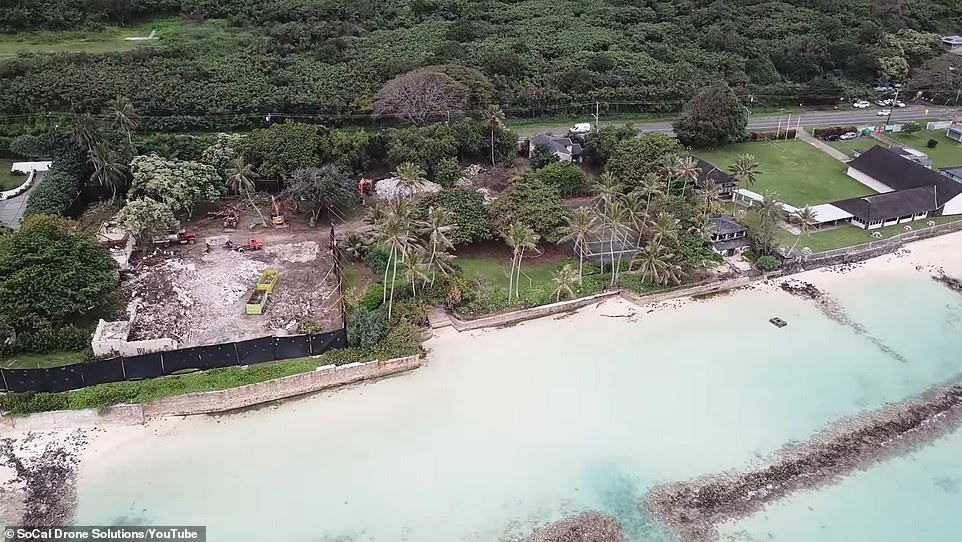 The beach has almost completely disappeared along the property, due to erosion along the seawall. In the water, the outline of an ancient turtle pond is seen 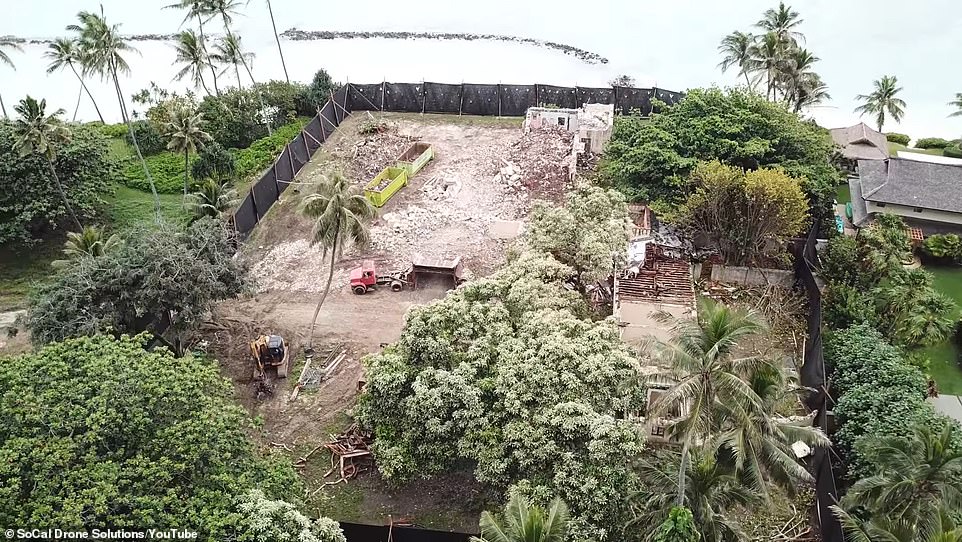 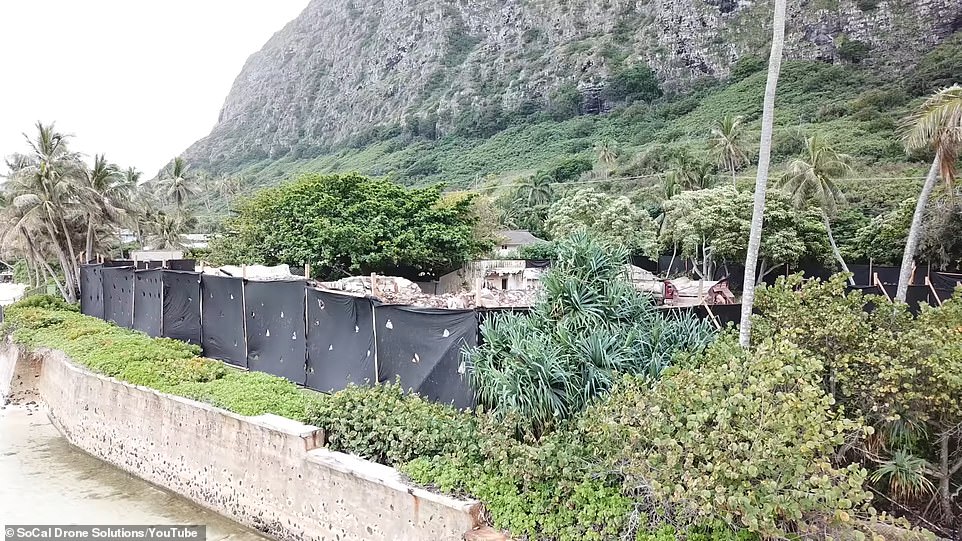 Part of the controversial seawall is seen bottom left. An easement granted by the state allowed it to remain 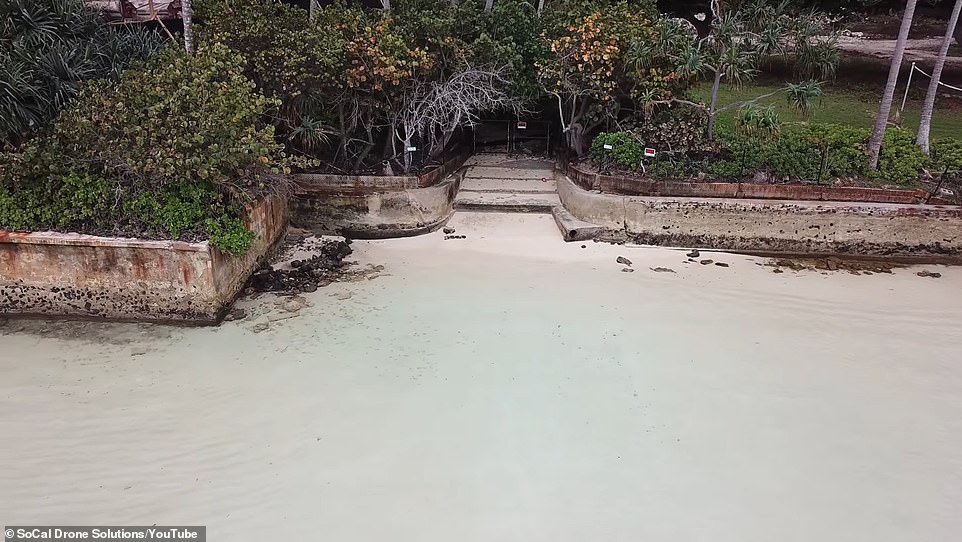 The sellers of the property to obtain an easement on the seawall (above) for a one-time payment of $61,400 before it was sold in 2015 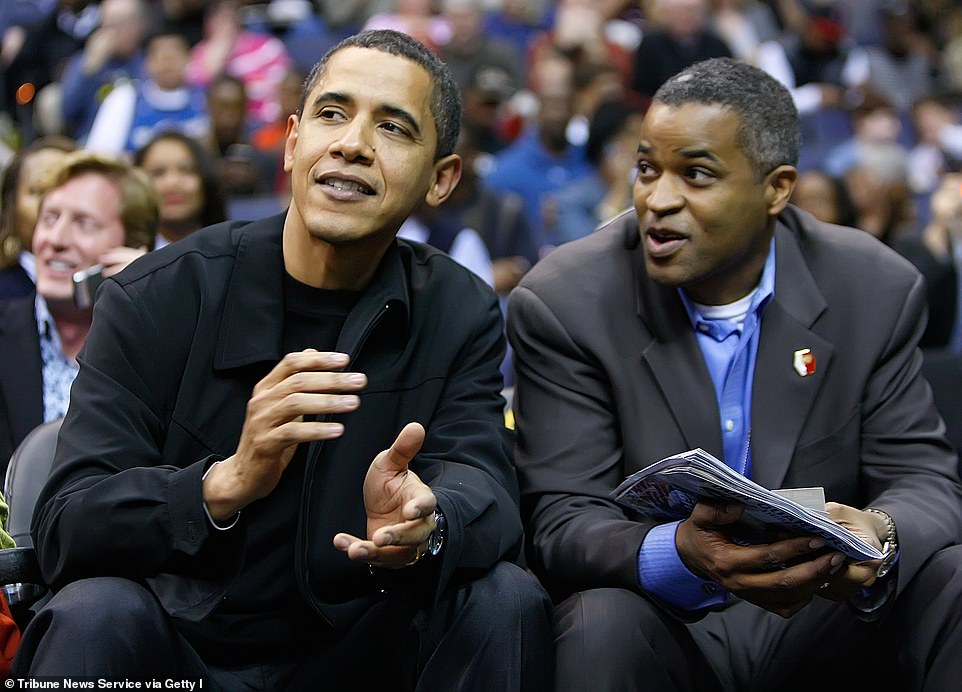 Obama talks with his friend Marty Nesbitt at an NBA game in 2009. Nesbitt currently serves as Chairman of the Barack Obama Foundation

Nesbitt, a wealthy Chicago businessman who supported Obama’s 2004 Senate campaign and served as his 2008 presidential campaign chairman, currently serves as Chairman of the Barack Obama Foundation.

He is said to be one of Obama’s closest friends and confidantes.

Obama’s personal office declined to comment on the seawall to ProPublica, referring inquiries to Nesbitt.

Nesbitt, who declined to be interviewed, would not directly address ProPublica’s questions about ownership of the compound, only saying that he and his wife bought the land and were “the developers” of the estate.

In written responses to questions, Nesbitt said the steps he’s taken to redevelop the property and expand the seawall are “consistent with and informed by the analysis of our consultants, and the laws, regulations and perspectives of the State of Hawaii.”

Any damage the structure caused to the Waimanalo beach, he added, occurred decades ago “and is no longer relevant.”

In addition to its fame as the former site of the Magnum PI house, the Waimanalo compound sits next to a historic turtle pond that used to feed Hawaiian chiefs.

Nesbitt sparked controversy in 2018, when plans leaked showing his intent to demolish the home from Magnum PI. 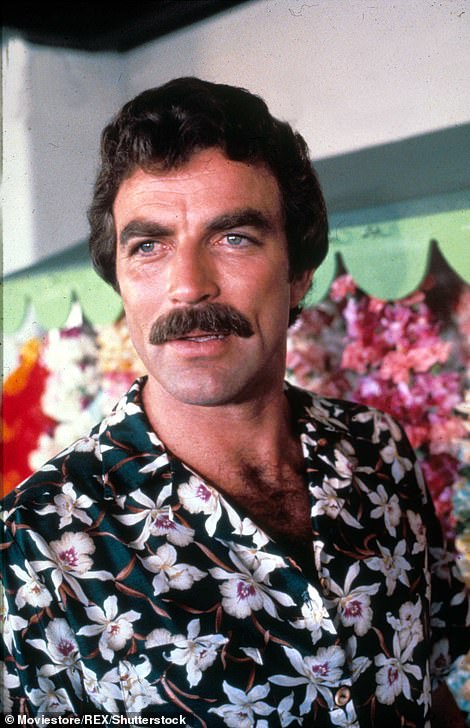 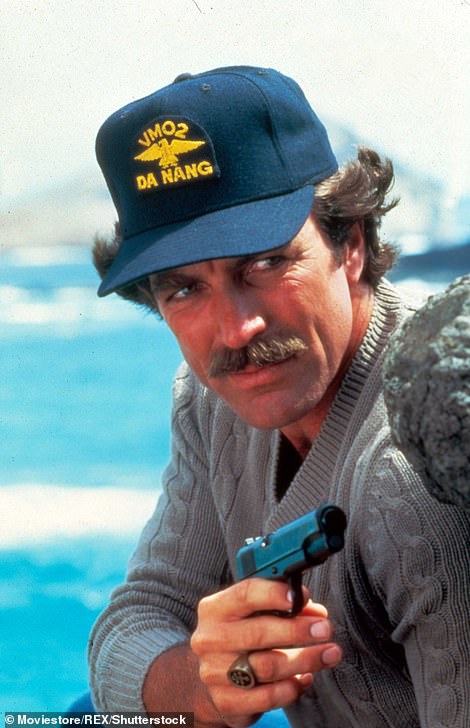 Tom Selleck is seen left and right from Magnum PI. The mansion featured in the show was torn down to make way for the new three-home compound. 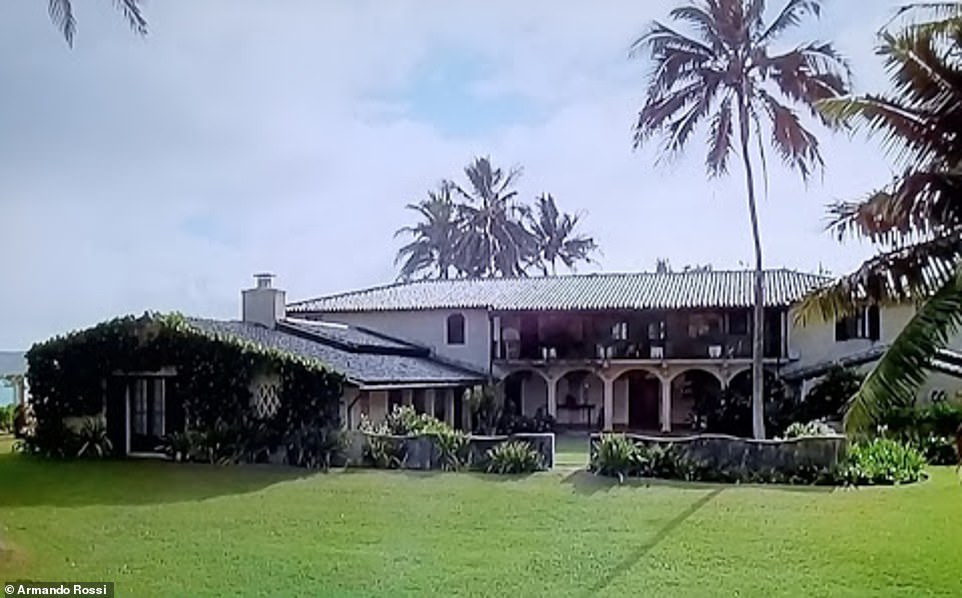 The 8,900 square-foot Magnum PI mansion, built in 1933, was one of the most famous homes on the islands, but had fallen into disrepair

The 8,900 square-foot mansion, built in 1933, was one of the most famous homes on the islands, but had fallen into disrepair.

It had not been listed on the registry for historic landmarks. The only nearby fixture with any sort of historical protection is the ancient turtle pond next to the property.

In January of this year, construction on the compound hit a snag when workers found human remains, believed to be ancient, on the property, the Honolulu Star Advertiser reported.

The bones were unearthed in an area where the owners were planning a swimming pool and septic system, and they were reburied months later on another part of the property. A state official made the decision to relocate the remains.