Plastic pollution is so bad fibres are in air we breathe

Plastic is now so widespread it can be found in the air we breathe and in household dust, experts have warned.

The air contains fibres from polyester clothing, traffic debris and fragments from water bottles and litter, according to research.

Professor Tamara Galloway blamed ‘inappropriate disposal’ of plastics for particles entering the atmosphere – as they eventually get broken down and are picked up by wind currents.

It had previously been thought they could only get into the human body from eating fish which contained microplastics from the ocean.

The air contains fibres from polyester clothing, traffic debris and fragments from water bottles and litter, according to research

While there is no clear evidence that plastic in the air is harmful, studies show children could now ingest more than 3,000 plastic particles a year.

Professor Galloway, an expert in ecotoxicology at the University of Exeter, said: ‘Most people will not be aware that there are tiny particles of plastic in road dust and in the air.

‘These are preliminary findings and there has not yet been any comprehensive research to determine whether there is any significant risk to human health.

‘At this stage it seems critical that fully funded research is conducted to explore this, and to determine how exposure through dust and land-based debris compares to exposure through eating contaminated seafood, for example.’

Presenting her report at a UN conference last month, she added: ‘I think many people will be surprised by the evidence on plastic now. It is not plastic which is the problem, but the inappropriate disposal of it.

‘Plastic in itself is not toxic and most of the estimates suggest the amount we are exposed to is probably too low to have an effect, but we just don’t know.’

Researchers have found plastic in the air is mainly brought down by rainfall, and often consists of fibres from synthetic clothing like fleeces which have gone through washing machines.

Other sources include plastic debris, traffic cones, speed bumps and waste blown from landfill sites – all of which are broken down into tiny particles by sunlight, wind and water.

Many are washed into waterways, but their tiny size means they can be taken up into the air, entering the atmosphere as particles before being deposited back as atmospheric fallout, for example in urban dust. 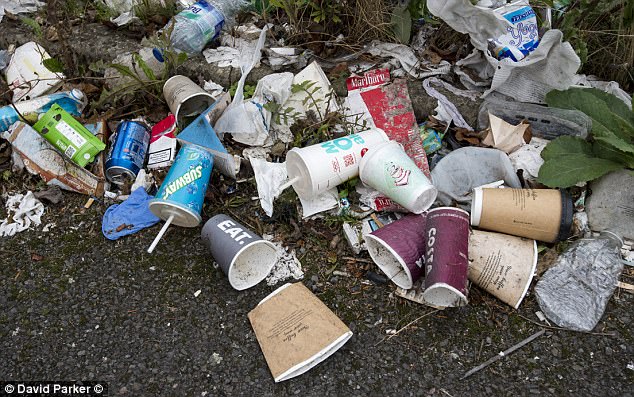 While there is no clear evidence that plastic in the air is harmful, studies show children could now ingest more than 3,000 plastic particles a year

Last year Professor Frank Kelly, an expert in environmental health from King’s College London, told the House of Commons environmental audit committee that if plastics were airborne, ‘we could breathe them in’.

He said: ‘If we could breathe them in, they could potentially deliver chemicals to lower parts of our lungs, even across into our circulation – in the same way we worry about vehicle emissions these days.’

French researchers recently estimated from an atmospheric study that between three and ten tonnes of synthetic fibres are dumped on to a city the size of Paris every year.

And Iranian scientists who analysed street dust reported that children could swallow as many as 3,200 plastic particles a year.

It has already been estimated that there could be up to 50 particles of plastic in an average plateful of shellfish such as mussels or oysters.

But the Iranian study, published this summer, also found adults could swallow more than 1,000 microplastic particles a year from dust, concluding: ‘Street dust is a potentially important source of microplastic contamination in the urban environment.’