A Kentucky plastic surgeon was arrested after he allegedly showed up drunk to perform an operation on Monday.

The hospital staff at Baptist Health Lexington were suspicious that Dr Theodore Gerstle might be intoxicated when he arrived for the only surgery he had scheduled that day, according to theLexington Herald Leader.

The chief medical officer on duty reportedly confronted Dr Gerstle about his apparent state before the surgeon got into the operating room.

Dr Gerstle left the hospital on foot and was arrested blocks away after the hospital staff reported the incident to the police.

Plastic surgeon Dr Theodore Gerstle was escorted to jail by police officers in Lexington, Kentucky after he allegedly showed up for a surgery drunk on Monday

According to his practice’s website, Dr Gerstle is board-certified and is ‘the only Harvard-trained’ plastic surgeon in Lexington, though he completed medical school at the University of Louisville in Kentucky.

Daily Mail Online called his office for comment, but the staff was unwilling to speak about his arrest.

Still in full surgical scrubs and lab coat, but no outerwear, the surgeon walked out of Baptist Health hospital and onto the snowy sidewalk in Lexington, where temperatures hovered in the upper 20s on Monday.

Dr Gerstle only made it a couple blocks before police arrested him on Shady Lane.

The officers took him to the Fayette County jail, where he is now being held on public intoxication charges.

It is unclear if Dr Gerstle had a track record of drunkenness on the job.

However, at least one Lexington resident, Alexander Sterling, had complained about the surgeon on Facebook.

‘Transmen do not go to Dr Theodore Gerstle MD of Lexington KY for top surgery. He royally f***** up Bryson Thompson’s chest and is not taking responsibility,’ Sterling wrote last March.

The warning accompanied a graphic picture of a bare chest – presumably Thompson’s – with jagged scarring around the nipples, one of which has signs of infection. 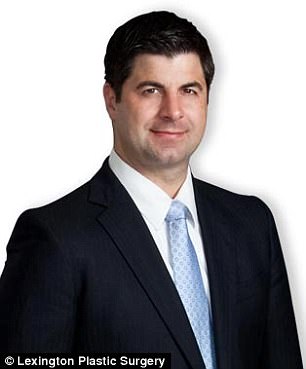 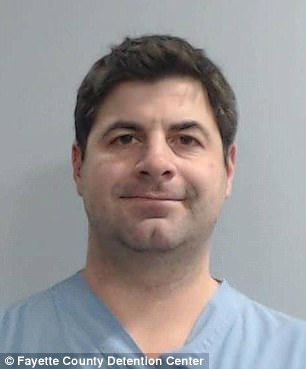 Dr Gerstle was charged with public intoxication at the Fayette County jail (right) after the private plastic surgeon (left) left Baptist Health Lexington, where he had scheduled a surgery

The scars look nothing like the straight straight-lined scars below the area where breast tissue would have been that typically remain after top surgery.

A study of more than 25,000 American surgeons conducted in 2012 revealed that more than 15 percent of them probably struggled with some form of alcohol dependence or abuse.

According to the Herald Leader, Baptist Health has suspended Dr Gerstle’s permissions to work at the hospital.

His license status remains active in the Kentucky Board of Medical Licensure’s database, but substance abuse is considered a violation of the state’s Medical Malpractice Act, warranting ‘discipline,’ the site says.