PLATELL’S PEOPLE: The pledge that proves Prince William is the true carrier of Diana’s flame

Three decades ago, Princess Diana did an extraordinary thing. At the height of the frenzy of fear over HIV and Aids, she shook hands with a frail young man who was dying from the disease.

It was, as they say, a game changer, altering for ever our view of Aids, which many wrongly believed could be ‘caught’ just by shaking hands.

This week her first child, Prince William, proved himself to be a true carrier of his mother’s torch in the way he demonstrated his support for the gay community.

Visiting a LGBT charity in East London, he said that if any of his children were gay, ‘that would be absolutely fine with me’.

Diana, Princess of Wales shakes hands with an Aids victim as she opens a new Aids ward at the Middlesex Hospital in London on April 9, 1987

With honesty, William added he’d be worried that, as famous kids, they might be bullied and persecuted, but he would stand by them.

It was a giant leap into the modern world for the monarchy, an institution dismissed by its critics as out of touch, irrelevant and bound by privilege and tradition. A great step forward, too, for the nation.

Why were his comments so important? Because as we learned recently when two gay women were attacked on a bus by youths, we’re still not the liberal society we like to think we are. Horrible homophobia still exists in this country, especially on social media. And in that small speech at the LGBT charity, William is tackling it head on. 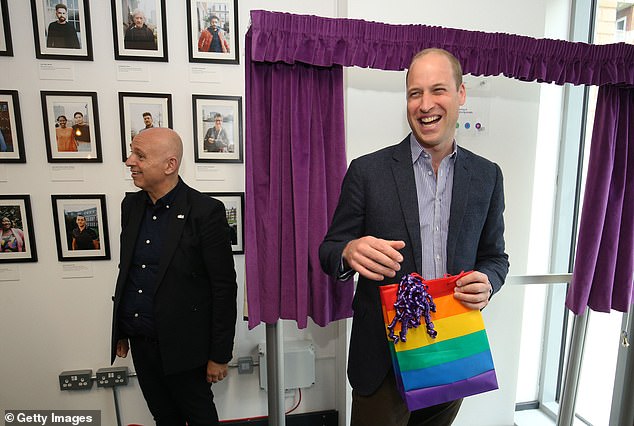 Prince William, Duke of Cambridge receives a gift bag from trust chief executive officer Tim Sigsworth as he visits the Albert Kennedy Trust to learn about the issue of LGBTQ youth homelessness 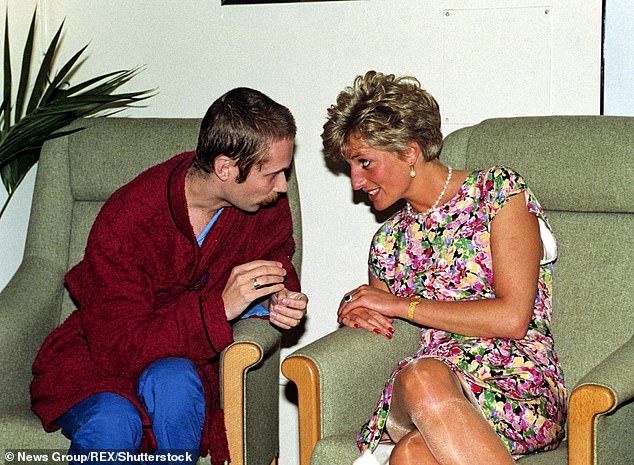 Princess Diana Talking to an AIDS patient at the AIDS Unit at the Middlesex Hospital, London

Our future king was effectively saying it would be perfectly acceptable for any monarch in years to come to be gay. Not very long ago, it was very different. It was only in the Nineties that a gay friend of mine and his partner were told they had to bring their own glasses to their local pub — so other people wouldn’t catch ‘their disease’.

And when people first saw Diana shake hands with an Aids sufferer, many were appalled — which is why it was so dramatic and brave of her to make a point of doing so.

Both of Diana’s sons are following in her campaigning footsteps. Prince Harry will soon tread the minefields she walked in Africa — a worthy endeavour — although hopefully not with Megs in her 6in heels.

But for all of Harry and Meghan’s progressive causes, it is William’s candid public acceptance of gays this week that really matters. For it proves he can shape the monarchy for the 21st century and beyond. His mum would have been be so proud.

Fourteen years after she was due to headline Glastonbury, but was forced to cancel having been diagnosed with breast cancer, Kylie Minogue will take centre stage tomorrow. 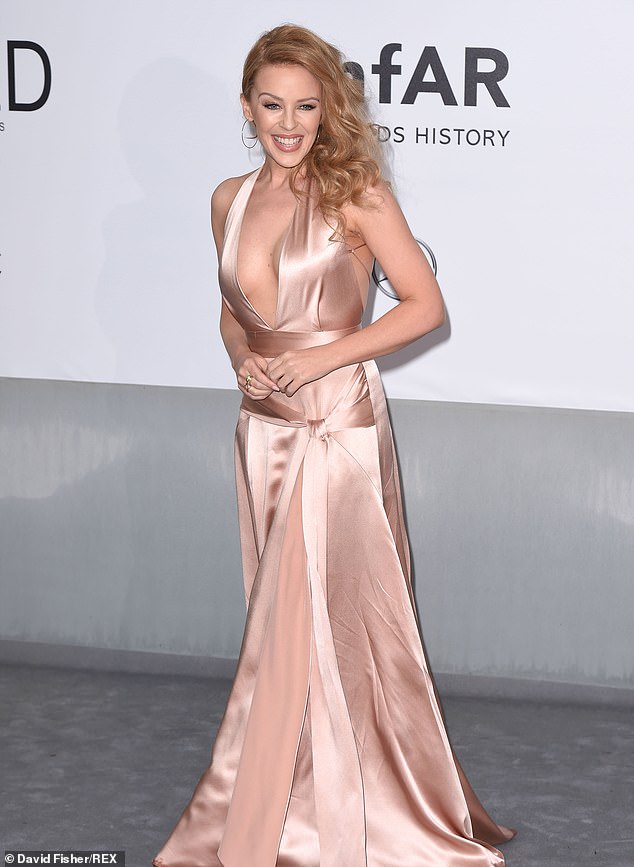 Fourteen years after she was due to headline Glastonbury, but was forced to cancel having been diagnosed with breast cancer, Kylie Minogue will take centre stage tomorrow

In 2005, she watched the festival in Australia while having chemo. Isn’t there something wonderfully indefatigable about Kylie in her gold hotpants, the pint-sized pop star with a modicum of talent and a bigger zest for life than most of us can dream of? We should be so lucky!

Keith Richards showed off his new auburn locks on the latest Rolling Stones tour. Perhaps someone should have told the decadent rock god — who is now bizarrely mahogany-skinned — that you’re not supposed to dip your whole head in the dye.

First we had Stacey Dooley pilloried for parading as a ‘white saviour’ while trying to highlight the plight of starving African children.

Now ex-Pussycat Doll Nicole Scherzinger’s motives are questioned after she’s snapped removing a plastic bag while on holiday off the coast of Capri, saying: ‘It only takes one plastic bag to kill an endangered sea turtle.’

Attention seeking? Perhaps. Yet her detractors should desist.

We need all the ‘plastic saviours’ we can get, even ones like Nic — who wears an eye-watering, skimpy yellow bikini to help save the planet.

Stella is the real potato head

Despite the film receiving rave reviews, writer Stella Duffy accuses Toy Story 4 of being anti-feminist, disablist, racist and hetero-normative (no, me neither). 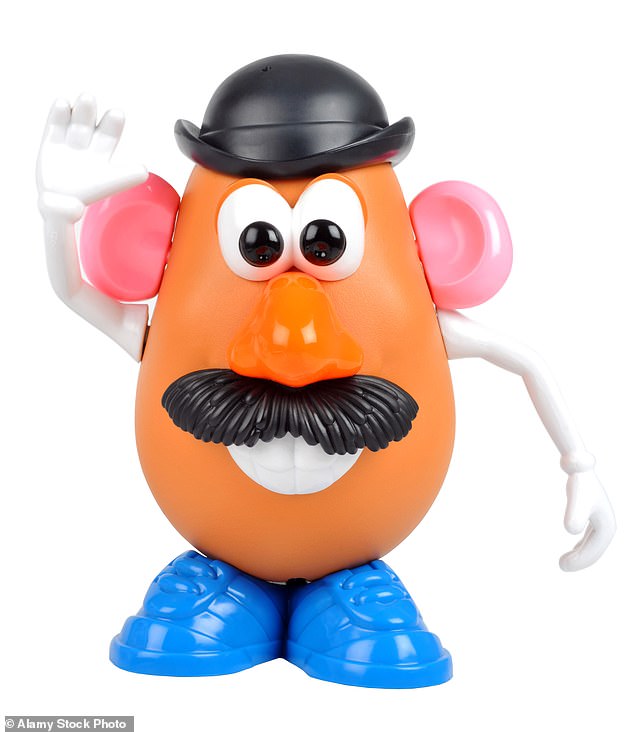 Mr Potato Head, with his mood swings and sarcasm, is the most human of the toys

‘How can they possibly think it’s all right [when] every single humanoid toy is white?’ she wails.

Duffy clearly hasn’t seen the same Toy Story. Mr Potato Head, with his mood swings and sarcasm, is the most human of the toys. He’s also brown and disabled, plus his eyes keep falling off — and his legs, arms, ears . . .

After years of speculation, Idris Elba says he’s never been offered the part of James Bond and is disheartened when people say 007 can’t be played by a black man. 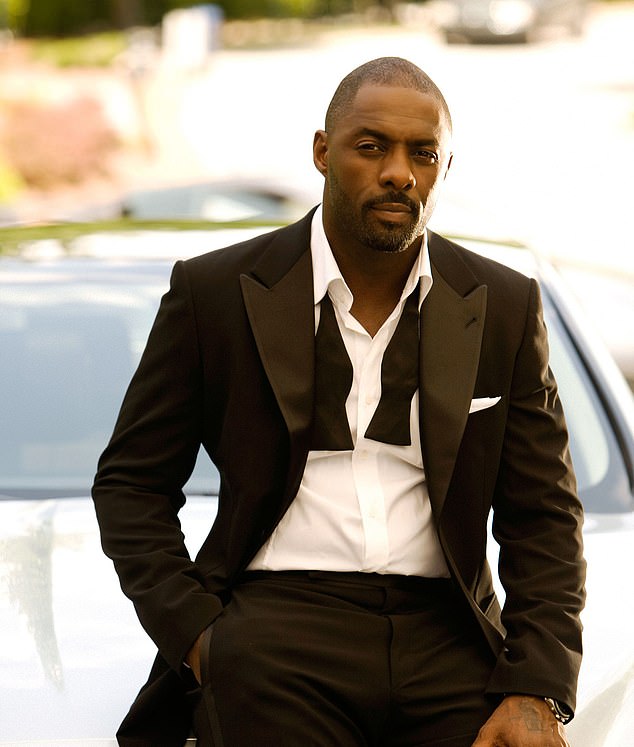 After years of speculation, Idris Elba says he’s never been offered the part of James Bond

Why the devil not? He’s tall, he’s fit, he’s hot, he’s magnificent and, unlike the current incumbent Daniel Craig, he doesn’t have a silly pursed-lipped smirk and weak ankles.

Along with millions of others, I watched the England women’s football team trounce Norway 3-0 to make it through to the World Cup semi-finals. Hurrah. The only thing I can’t work out is, if the enthusiasm for the women’s beautiful game is so great, with tens of millions watching it worldwide on TV, why were there so many empty seats?

The British Medical Association voted to refuse to charge people who are not British and do not live here for NHS care. Doctors say it’s ‘racist’ to bill health tourists and they’d be ‘complicit in the oppressive regime’, whatever that means.

What blinkered arrogance. Perhaps before these medics make such claims, they should consult the millions of Brits from black, Asian and ethnic minority groups who have lived here all their lives, paid their taxes and — like all of us — can’t get to see a GP inside three weeks.

Harry and Megs are to tour South Africa later this year with baby Archie and may now spend many months each year there. Maybe while they’re away, they can recoup the £2.4 million renovation costs we’ve paid for their grace-and-favour cottage by renting it out through Airbnb.

Defence lawyers for the McMafia oligarch’s wife Zamira Hajiyeva claim it’s not a crime to spend £16 million in Harrods. Indeed, for most of us it’s a dream.

Wishing her twin daughters a happy 10th birthday, Sarah Jessica Parker messaged on social media: ‘You turned our lives inside out and upside down, filled and continue to fill all the remaining space with endless surprises, romance, sentimentality, art and a bounty of the sort of love we [she and hubby Matthew Broderick] didn’t even know we were missing.’ Oh for the days when a hand-written card saying ‘Happy Birthday, darling daughter’ would suffice.

After handing in her driving licence due to failing eyesight, Judi Dench, 84, says: ‘I’ll probably kill someone if I get behind the wheel of a car now.’ Of all the ignominies of ageing, losing your licence is one of the worst. ‘Like losing your legs,’ my Dad used to say.

A sobbing Yewande Biala broke down, after being booted out of Love Island, claiming she didn’t realise how hard it would be to find love on the reality TV show. Crikey, the girl’s a scientist — it doesn’t take a Mensa intellect to work that out.