PLATELL’S PEOPLE: Why Houdini Boris will need escape skills for the perils ahead

Good news at last. Boris Johnson will not face a criminal inquiry over his friendship with pole-dancing IT entrepreneur Jennifer Arcuri.

The Prime Minister had accompanied her on overseas business trips while Mayor of London, visited her flat for ‘technology lessons’ — and authorised thousands of pounds for her ‘fact-finding’ work.

Many believed Boris was toast. Another affair they thought — though she’s refused to confirm it — but this was different. It involved public money, the alleged misappropriation of taxpayers’ funds.

Now the Independent Office for Police Conduct has declared there’s nothing to investigate.

True, he still faces an ethics inquiry by the Greater London Authority over his relationship with Arcuri. And that’s something that would finish off many a politician — imagine Sunny Jim Callaghan, for instance, facing questions about ‘intimacy’ with a pole-dancing tech expert. But to Boris it’s nothing, now he’s seen off the criminal inquiry. The Houdini of British politics has survived. Again. He really is extraordinary.

Pictured: Britain’s Prime Minister Boris Johnson takes part in the ‘Clap For Our Carers’ initiative in support of the National Health Service (NHS) in Downing Street in London, May 21

That’s not to say life is as rosy as Boris would like it. Yes, he’s got his dream job. But he has lost some of his verve. Hardly surprising since he was in intensive care so recently. He’s not yet back to the man who toured the country with vim and bonhomie before bulldozing his way to victory in the election just months ago.

He’s got a new child to keep him awake all night. He faces a robotic inquisitor at Prime Minister’s Questions in Keir Starmer, and a Labour Party with more zip in its step.

On top of this, we are looking at the worst recession for 300 years and his party’s getting tetchy about his handling of the lockdown. A poll in this newspaper reveals Chancellor Rishi Sunak is the most popular Tory, followed by Foreign Secretary Dominic Raab. Boris is third.

Sunak and Raab represent the true hawkish spirit of the Conservative Party, and want to get the economy running again. But Boris sometimes seems indecisive, flapping around like a wounded dove.

Who would want to be in his position now? Well Boris, for sure — as a child he said he wanted to be king of the world. But our political Houdini will need all his skills to escape the perils ahead.

A survey reveals that more than half of Londoners say they will race to their local pub the minute they are allowed to open again. Which just proves how much people lie in surveys. By my calculation, the pub-rush will involve 95 per cent of us…

Having been caught describing pupils as ‘mucky’, germ-spreading and snotty, Mary Bousted, leader of the teachers union blocking kids returning to school, apologised. ‘I am wrong sometimes. Blunt probably too often (it’s a Northern thing),’ she said.

What an insult to Northerners. Having almost married a Yorkshireman and spent many happy years up North with him, I know the thing they have in common is a desire for their children to get the schooling many of their generation never had.

How dare Ms Bousted deny all kids that fundamental right with her naked Left-wing posturing.

Our hearts go out to Kate

News that ITV presenter Kate Garraway’s husband Derek Draper is still in hospital, having been there since the end of March, is so saddening.

Especially when we read social media posts from Kate revealing how her heart — and those of their two children — sink ‘every day’, searching for ‘little green shoots of hope that this dreadful disease is easing and that hopefully soon we might all be able to see each other again and hug’.

We wish the same for you Kate, and for your children, and for everyone going though such agony — and that there will come a day when we can all hug again. 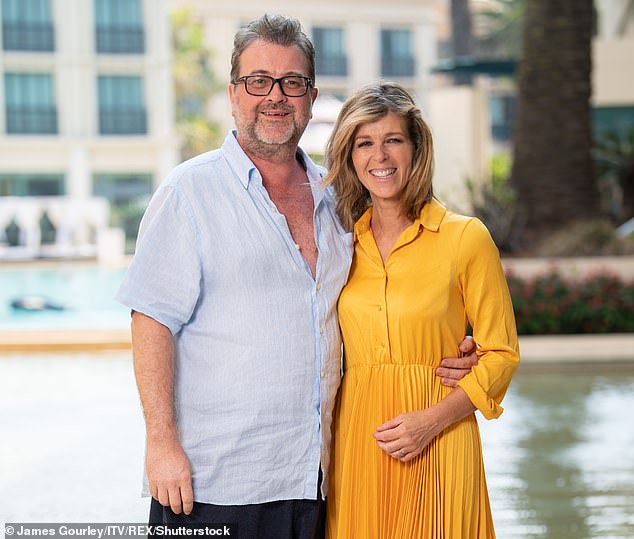 Pictured: Kate Garraway with her husband Derek Draper, who is currently in hospital

Receiving news of his knighthood, Captain Tom said: ‘I’d like to thank Her Majesty. I will remain at your service.’ The ex soldier, who’s now 100, will put Queen and country first until the end. Unlike Captain Wales, who served ten years in the Army, then marched off to a life of luxury in a £14 million grace-and-favour Los Angeles mansion with wife Meghan and baby Archie — abandoning Queen and country not far into life’s journey.

I’ve known Anthea Turner a little for a long time and am happy she’s about to marry again after her bankrupt ex, Grant Bovey, ran off with a younger blonde. There is something unconquerable about the former Blue Peter star’s belief in love. A blue badge? No, she deserves a silver one.

I am in awe of Liz Hurley, 54, who posted a picture reclining on a faux fur rug looking simply sensational in a Versace dress she first wore in her early 30s. Two decades on and she can still fit into it! Crikey, after self-isolation in lockdown, eating fast food — all right, junk food — in my Sweaty Betty stretch leggings, I can’t fit into a designer dress I wore two months ago!

Left: Liz Hurley, 54, poses in a dress she first wore in her early 20s. Right: Liz Hurley, pictured at the 1999 CFDA awards in the same dress

She enjoyed eight years as the First Lady married to President Bill Clinton; four years as Secretary of State; she ran for President herself; and she stood by her man after the Monica Lewinsky affair.

A new novel entitled Rodham by the best-selling author Curtis Sittenfeld poses the question: What if Hillary hadn’t married Bill? To which the answer is: Hillary who?

Some of the viewers addicted to the teenage TV series Normal People about angst and young love say they need subtitles to understand the Irish accents of the actors, especially that of County Kildare-born hunk Paul Mescal. Oh do get over yourselves. Most of the sensational six-hour series is just adolescent slobbering, kissing and copulating — understandable in any language.

Yesterday was the third anniversary of the Manchester Arena bombing, which killed 22 mostly young people at a pop concert.

Services were held throughout the city, and the singer Ariana Grande, who was starring at the arena when the bomb went off, said with feeling: ‘Not a day goes past that this doesn’t affect you and all of us still.’

Those words would chime with Freya Lewis, now 17, who lost her best friend Nell Jones in the blast and suffered terrible injuries herself.

‘Nell will forever be with me. I’m at times overwhelmed by grief,’ she says — before adding, with such an uplifting sense of human spirit: ‘But I feel like I’ve had a second chance, I feel more grateful for everything and everyone.

‘My main goal for the rest of my life is to be happy and remember how lucky I am to be here.’