Italy qualified for the semi-finals of Euro 2020 after a 2-1 victory against Belgium in Munich.

Goals from Nicolo Barella and Lorenzo Insigne but Roberto Mancini’s men into a two-goal lead, before Romelu Lukaku’s penalty halved the deficit just before the break.

Italy will now meet Spain at Wembley next week, and here Sportsmail assesses the performances from both sides after an enthralling affair.

The Real Madrid goalkeeper won his 89th cap in Munich but on few others would he have felt so helpless.

Had no chance with Barella’s fierce effort or the superb curler from Insigne.

The Tottenham defender was part of a defence that eventually buckled to bits of Italian quality.

Made a couple of decent blocks in the first half but ultimately faded when it mattered most.

Dealt with things for the most par aerially and managed to keep danger man Immobile relatively quiet.

But it could well be the 35-year-old’s final appearance at a major tournament for his country.

Delivered a sufficient performance in the air but crucially lost the ball in the build-up to Barella’s goal. Part of an ageing defence that struggled to deal with a vibrant Italy. 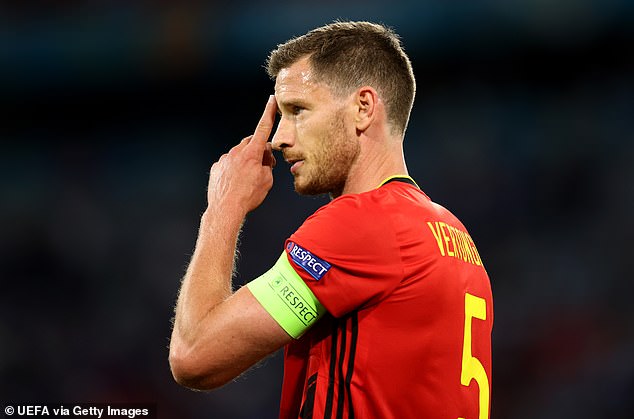 Got down the right-hand side well but too often he wasted opportunities to cross the ball into dangerous areas with wayward balls. Struggled to contain Insigne and Chiesa at times down his side.

The Leicester star was the better of the central midfielders and tried to keep Belgium ticking. Relieved pressure at times with bursts from deep, but was a similar display in nature as against Portugal.

A surprise he was substituted with a good chunk of the second half still to go.

Virtually anonymous in the first half as he and Tielemans struggled with the energy from the Italian midfield. Added very little to the attack as well. 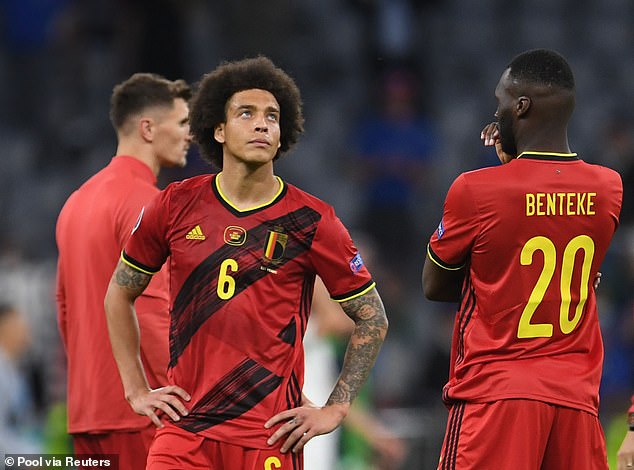 A much quieter outing than the decisive impact he made against Portugal, his uncomfortableness in the left wing-back role was amplified by Chiesa and co. running riot at times.

Very impressive display with his electric pace. The Rennes star won the penalty from Di Lorenzo’s push to get Belgium back into the game and was a constant menace to the Italy right-back.

Fired just over late on after more pace to work a shooting space. His selection over Yannick Carrasco was more than justified. 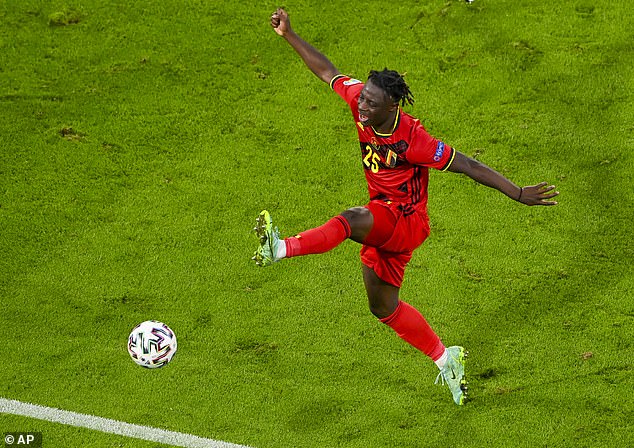 Jeremy Doku was a menace all evening, won the penalty and deserved to score on the night

Another decent performance by the Manchester City star who sets such extremely high standards.

Did break well from his own half to set up attacks in the first half but despite pushing to create something received very little support from those around him.

Scored a pressure penalty to halve the deficit but the rub of the green didn’t go his way at times. Substitute Nacer Chadli’s cross just went too high and his goal bound shot was blocked by Spinazzola. A player of his quality would still have expected to do better regardless. 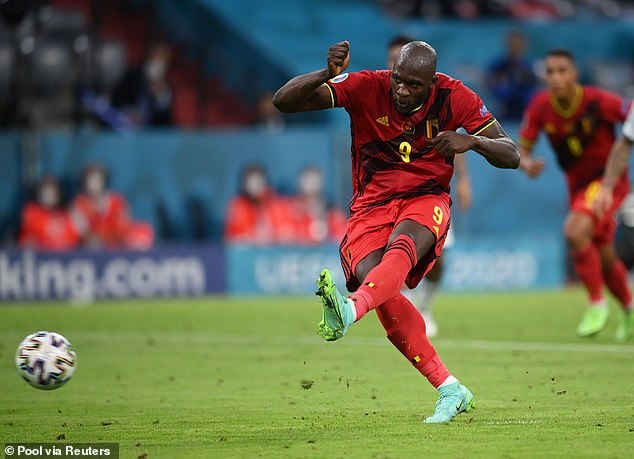 And so ends another tournament where Belgium’s golden generation under the Spaniard have come close but not quite close enough. Surprising decision to substitute the impressive Tielemans so soon in the second half.

Didn’t have one of his busiest outings but was resilient when his country needed him to be.

A tough outing for the Italian defender as he was at times run ragged by Doku. Got the touch that meant Bonucci’s goal was offside and gave away the penalty which on another night could have cost them.

Thought he had given Italy the lead after a free-kick bounced in off him only for him to be in an offside position from Di Lorenzo’s touch.

But he showed his normal defensive nous by throwing himself at a Hazard cross in the first half and held firm under late pressure. 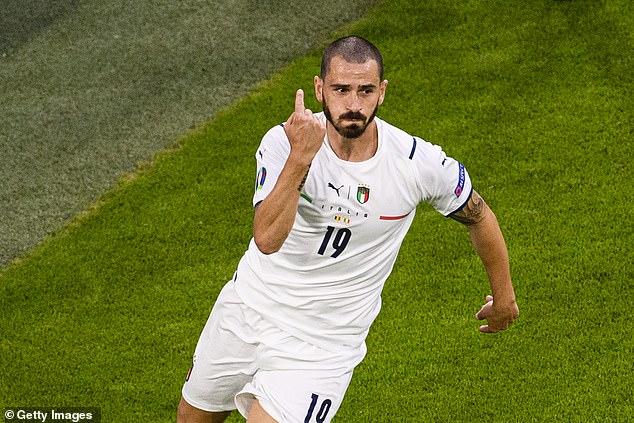 Leonardo Bonucci had an effort ruled out for offside but held firm in defence, especially late on

Returned to the XI from a leg injury and proved to be a reliable partner to his long-term compatriot Bonucci.

Blocked or did enough to stop Lukaku from equalising and dealt with one of the most in-form and dangerous centre forwards in the game despite his ageing legs.

Has impressed many with his attacking performances down the left, but the Roma man showed his defensive value by blocking a goal bound Lukaku effort in the second half.

Was still a threat going forward and could have sealed the game had he been able to get on the end of a long ball, but went off 13 minutes from the end in tears which looked tournament ending.

Wonderful goal after squeezing past Hazard and Vermaelen to fire the ball into the bottom corner.

Epitomised the energy that Roberto Mancini’s men have demonstrated throughout Euro 2020 and often suffocated his Belgian counterparts with a tireless work ethic. 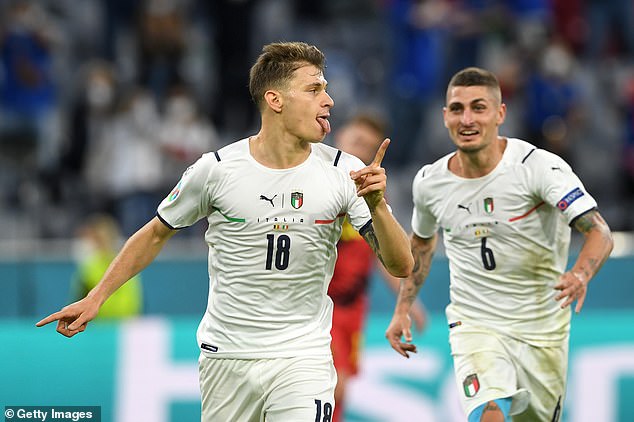 The Chelsea man was pulling the strings from deep and allowed the likes of Marco Verratti and Barella to push forward.

It was the sort of performance that Chelsea fans have become accustomed to at Stamford Bridge under Thomas Tuchel. His composure added calmness to the all-action nature of Italy’s midfield.

A magnificent first half was capped off by a number of successful passes into dangerous areas and the most duels won in the first half.

Manuel Locatelli may not have done a lot wrong this tournament, but Italy’s machine has the PSG man at its core.

Tested Belgium in particular in the first half following the high of scoring against Austria.

Was a threat on whichever side he popped up on and had most of their first-half shots, including one which curled just past the post. 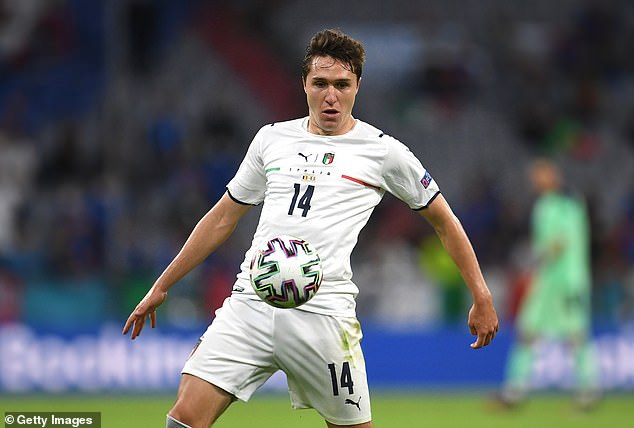 A quiet evening by his high goalscoring standards, struggling to help in the build-up play and hardly seeing a sight of goal because he conceded possession with some regularity.

His performance may be one of a couple of blots on what was otherwise a solid performance from Italy.

Tried to make things happen down left all night, and his perseverance was rewarded after unleashing a stunning strike for the second goal. Livewire that once he got going Belgium struggled to contain.

Appeared calm when the Italian fans inside the Allianz Arena were going berserk due to the goals. His tactics kept Belgium quieter than they have been at times during the tournament.

His next masterclass is needed in how to keep Italy’s momentum going without Spinazzola. 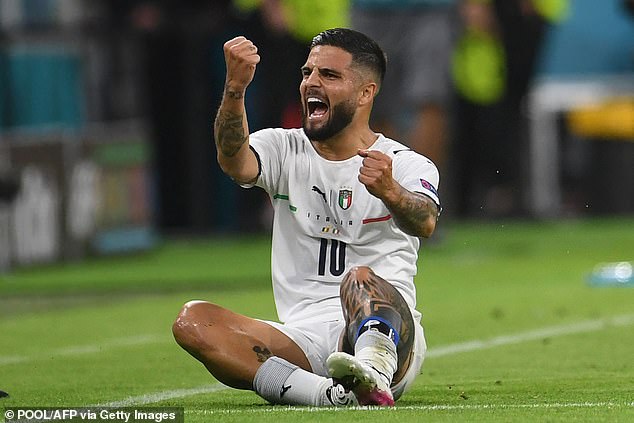