PLAYER RATINGS: Lionel Messi’s Argentina were too good for the Socceroos with goals to Messi and Alvarez… despite a late own goal to to make it 2-1

A goal in each half to Argentina has ensured the Socceroos are eliminated from the 2022 World Cup. Craig Goodwin gave the Socceroos some hope with a late deflected goal – ruled as an own goal.

Lionel Messi’s side will now take on the Netherlands in the quarterfinal.

Here’s how the Socceroos rated:

MAT RYAN 3.5 –  A mistake in the second half cost the Aussies dearly. Strong game otherwise, but the Aussie skipper’s howler was very costly.

HARRY SOUTTAR 6 – Another strong game for the towering defender. Unfortunately he couldn’t get in the way of Messi’s first strike.

Lionel Messi scored the breakthrough goal for Argentina. It’s his first goal in the knockout stages of a World Cup 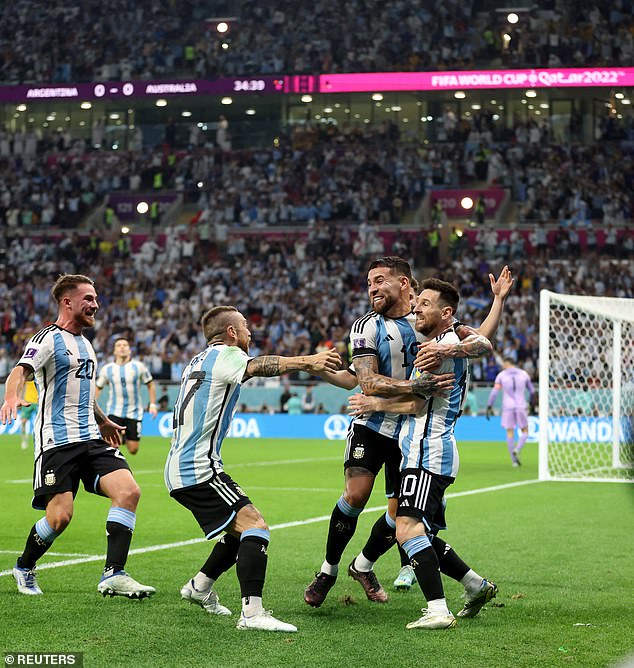 Messi celebrates with teammates after scoring the first goal for Argentina

KYE ROWLES 6 – Made hardly any mistakes and gave his all. His pass back to Ryan put the keeper under pressure, but he can’t be blamed.

AZIZ BEHICH 4 – Lost his cool in the 35th minute and gave away an unnecessary foul that led to the South Americans scoring.

MAT LECKIE 5 – Unfortunately didn’t have many chances at goal for the Socceroos. He had a great World Cup for the side otherwise.

JACKSON IRVINE 5 – Fought hard and picked up an early yellow that would have ruled him out of the quarter-final had the Socceroos made it.

AARON MOOY 6 – Controlled the middle of the pitch well for the Socceroos – especially in the first half. 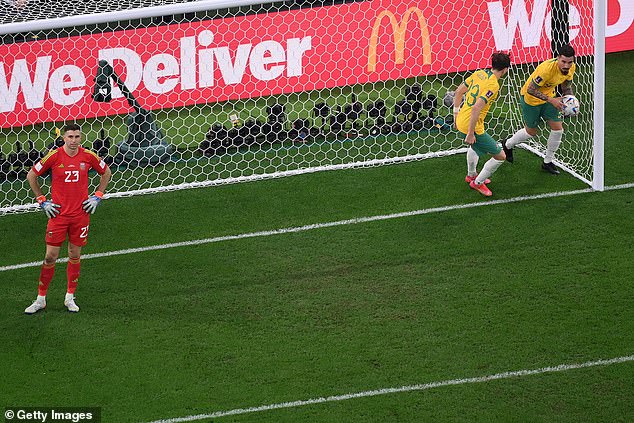 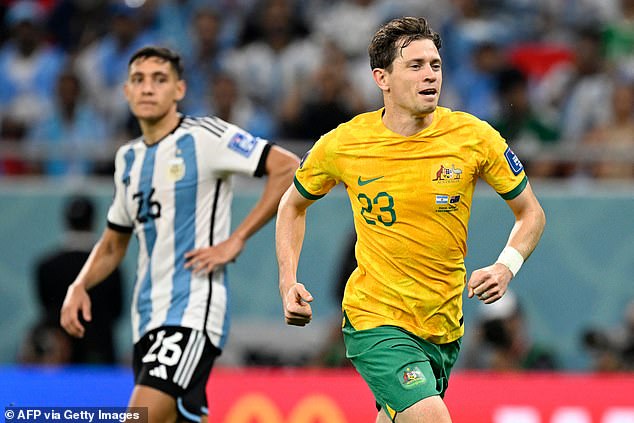 KEANU BACCHUS 6 – Put a strong tackle on Messi early and didn’t look out of place after being called up to start.

MITCH DUKE 6 – Duke didn’t get a lot of ball, but did well putting pressure on the South American side by staying busy.

RILEY McGREE 6 – Had some good moments with the ball and played a solid game throughout.

CRAIG GOODWIN 8 – Gave Australia a chance with a deflected goal (ruled as a own goal) and looked electric on the ball.

ALOU KOUL – 5 Almost equalised late in injury time, but it wasn’t to be.

JAMIE MACLAREN 5 – Ran hard and made a nuisance of himself while he was on the pitch.

AJDIN HRUSTIC 7 – Hrustic had some great touches and looked dangerous on the ball.

FRAN KARACIC 6 – Didn’t make any mistakes and didn’t look out of place.