Spain made it through to the Euro 2020 semi-finals by beating a resilient Switzerland side on penalties in Saint-Petersburg.

La Roja took the lead when Jordi Alba’s strike took a wicked deflection off Denis Zakaria and past Yann Sommer into the goal. Xherdan Shaqiri levelled matters in the second-half by taking advantage of a mix-up between Aymeric Laporte and Pau Torres at the back. 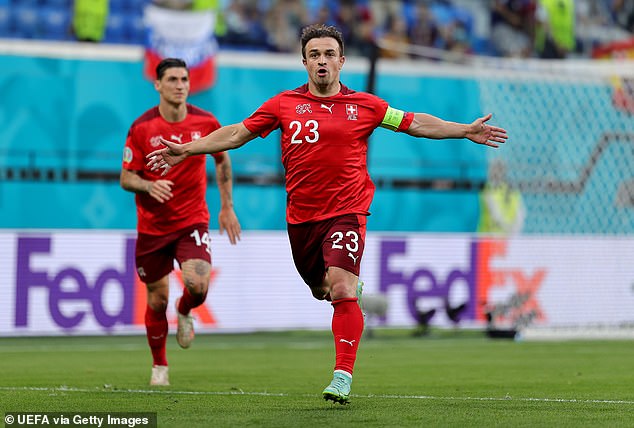 Unai Simon – 8: No nerves after blunder in last game. Received a 40-yard backpass from Morata and dealt with it well. Saved well from Zuber to push out the best Swiss chance before they scored. Then stood up in the shoot-out and put Spain in the semi-finals.

Aymeric Laporte – 7: Sensational crossfield pass to find Olmo early on in the second half. Great distribution throughout but was co-author of the mix-up for the goal.

Pau Torres – 6: Slightly nervy start with Embolo running at him at every opportunity. His nemesis went off but distribution was still shaky. Culpable along with Laporte for goal. Got better late on when Spain needed him on the attack. 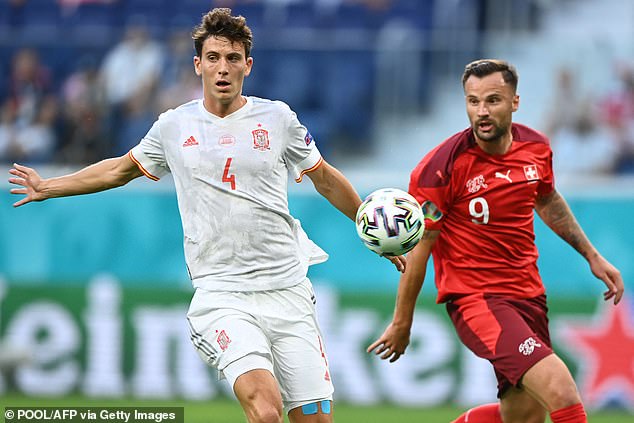 Jordi Alba – 8: Powerful shot diverted home by Zakaria for his ninth goal for Spain. Quick and tidy defensively too. Another fierce shot in extra time.

Sergio Busquets – 7: Held things together in centre of pitch. But failed to properly connect with corner late on in one of Spain’s best extra-time chances. Then hit the post with his penalty.

Pedri – 9: Twinkle toes never faded. Worked back defensively. Slowed down by Widmir’s very deliberate knee into the back but recovered to impose himself in second half and extra time. 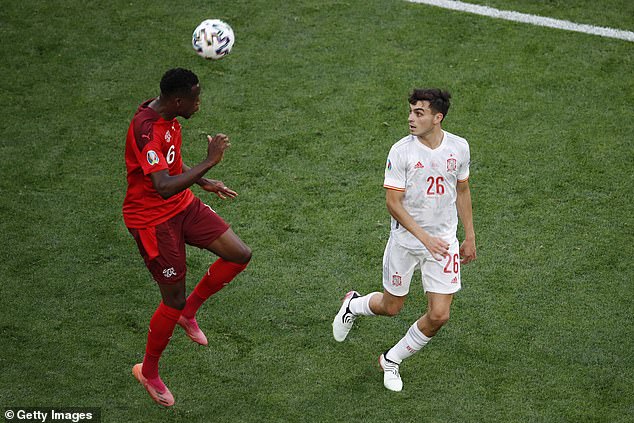 Pablo Sarabia – 5: Felt an injury early on and it affected his game. Swapped wings with Ferran but struggled on the right too. Replaced by Olmo at the break.

Ferran Torres – 7: Won the early corner that led to the goal. Won second half corner with acrobatic volley. Always a threat until taken off before extra-time.

Dani Olmo – 7: Came on at half time for Sarabia and had chance within first minute but shot at Sommer. Countless chances in extra time but couldn’t score.

Gerard Moreno – 7: Replaced Morata on 55 minutes didn’t offer same outball. Missed chances that Morata might have taken. But just as it seemed confidence had been hit by being left out for so long hammered home his penalty. 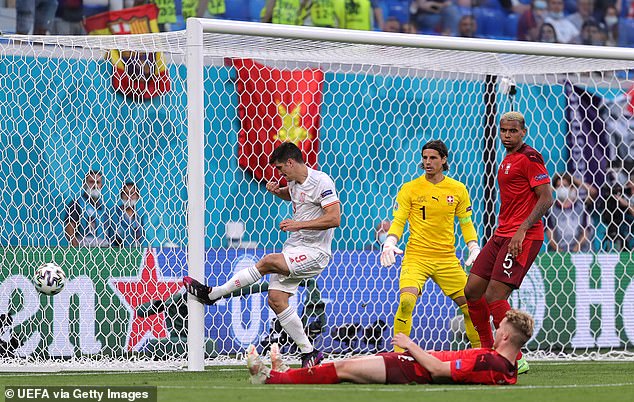 Mikel Oyzarzabal – 7: Had chances to win it in extra time but had the last word with cool penalty under pressure to put Spain through.

Yann Sommer – 9: Brilliant throughout. No chance with the goal. Kept out Olmo effort after restart. Gave the teamtalk to the huddle before extra time. Then saved from Alba, Oyarzabal, Moreno and Olmo in a sensational extra time.

Nicolas Elvedi – 8: Did well to get in front of Morata to prevent a second Spain goal in normal time. Olmo caused him problems but he came to the fore after Swiss were reduced to 10 men. 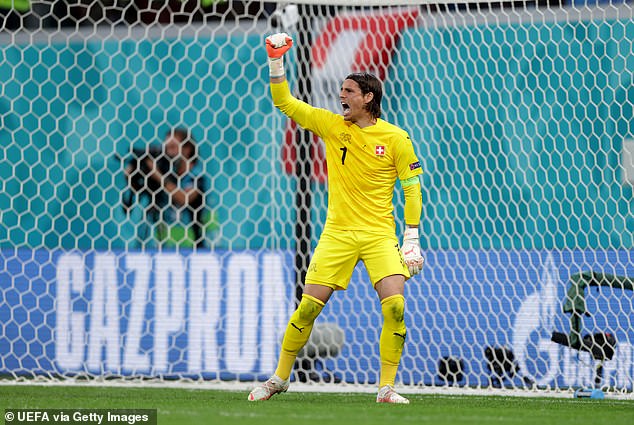 Manuel Akanji – 8: Landed early kick on Morata but was then beaten in the air comfortably by Azpilicueta at a corner. Got his head to an attacking corner for Switzerland. Great late on when Swiss needed defensive heroes.

Silvian Widmer – 7: The best of the Swiss back four getting the better of Sarabia. Got to Spain’s byline to win a corner too. Vicious knee into the back of Pedri. Cynical. Not booked until second half foul on Busquets.

Denis Zakaria – 6: Started game in holding midfield not part of a back three as expected. One powerful run troubled Spain early on. Diverted Alba’s shot past his own keeper for Euro 2020’s 10th own goal. Almost made amends in second half but headed just wide from corner. 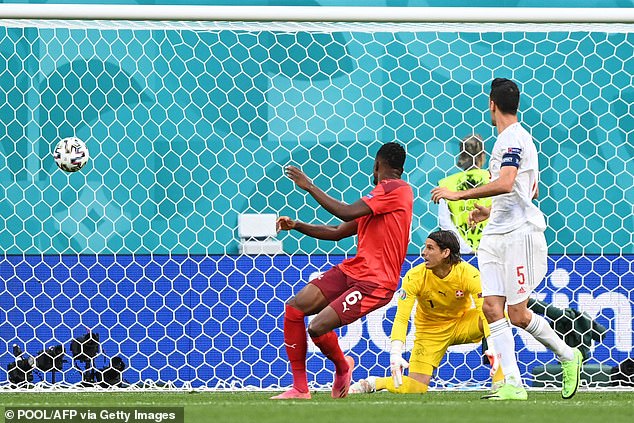 Remo Freuler – 6: Over-run in midfield by Spain’s trio Koke, Busquets and Pedri. Got better in the second half and set up goal but then received his marching orders for dangerous play with foul on Gerard Moreno with follow through.

Steven Zuber – 6: Played further forward than expected as Swiss abandoned wing-backs system. Caused fewer problems for Spain as a result in first half but had their best chance second half before goal.

Xherdan Shaqiri – 7: Missed early chance. Good delivery from set-pieces. Even tried to score direct from one and hit side-netting. Got the equalizer. Then sacrificed when they went down to 10-men. 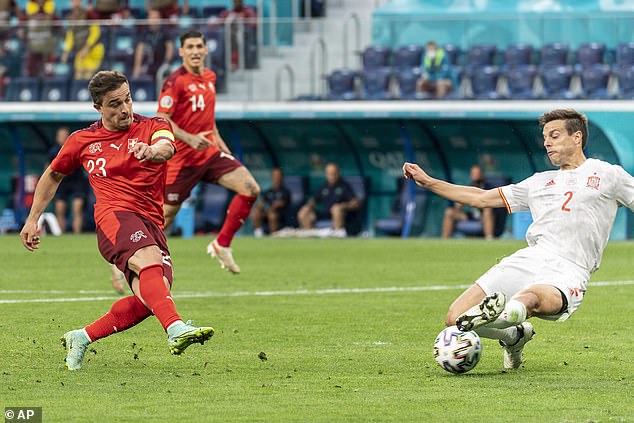 Haris Seferović – 6: Missed Embolo’s pace alongside him and never really threatened Spain and was taken off.

Breel Embolo – 7: Biggest threat to Spain early on but sustained thigh injury after clashing with Paul Torres. Vargas replaced him after just 22 minutes.

Ruben Vargas – 7: Came on for Embolo on 21 minutes and did not offer the same threat early on but grew into game and threatened Spain on break. Skied penalty.