This is the incredible moment an exotic monkey escaped from the zoo and headed straight to McDonald’s in Sweden.

The Goeldi’s marmoset jumped from tables and tucked into treats at the restaurant nine miles away from the zoo.

Police were called to the McDonald’s in Gothenburg, Sweden, at around 10.40pm yesterday as the city’s zoo alleged the mammal had been stolen.

The playful monkey hops inbetween tables while picking at leftover food on the tables as onlookers videoed it.

‘I see there was food monkeys usually prefer,’ wrote one diner.

‘A runaway monkey sat down at a table in McDonald’s,’ another added.

‘So I spotted the “Stolen” monkey in Mcdonalds omw to work. I guess she’s lovin’ it,’ a teenager posted.

Peter Nordengard, a police spokesman, said: ‘We think it’s the same one [monkey that left the zoo], but I guess there aren’t that many monkeys out and about at the moment.

‘She didn’t even dip her french fries in Béarnaise sauce.

‘We’ll have to sniff around a bit to see if anyone brought it there. The most plausible explanation seems to be that someone left it there.

Gothenburg science centre Universeum reported the monkey missing at around 12.30pm but it is unclear what the animal did in the hours before her meal.

‘It is extremely sad what happened,’ said Daniel Roth, a zoologist at Universeum.

Staff were said to have dashed to the restaurant to retrieve the playful monkey.

The Goeldi’s marmoset, a South American monkey, is a vulnerable species. It is black in colour and females measures around 15 to 20 centimetres. 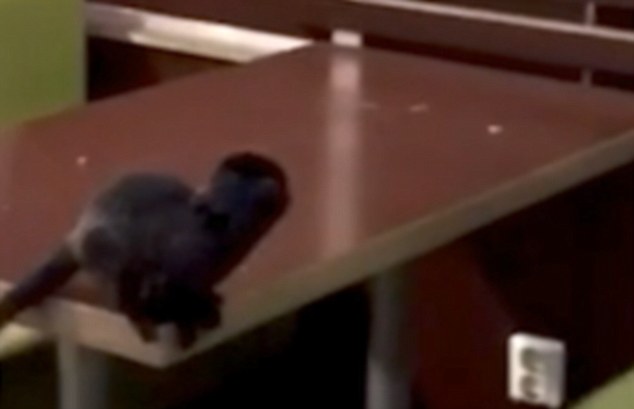 A spokesman for McDonald’s said: ‘The monkey was stolen from a museum in Gothenburg and was, thankfully, found at one of our restaurants.

‘The monkey is of a very unusual species and the museum is very grateful for the way in which this was handled by the franchisee and his staff. The monkey is now back at the museum and is doing well although a little stressed.’