The devastated mother of a law graduate who plunged 40ft to her death from a bridge while desperately seeking help after her car caught fire today said her daughter pleaded with rescuers: ‘Please don’t let me die’.

Azra Kemal, 24, slipped through a 10ft wide void between two carriageways on a road bridge while escaping a burning car on the A21 on Thursday.

She climbed over the barriers in the dark thinking that there was a central reservation between the carriageways before falling to her death.

Fighting back tears, Azra’s mother Nevres Kemal, 56, today revealed that her home in north London felt empty without her only child.

Speaking in Whetstone, the social worker – who exposed failings in child care in Haringey before Baby P died in 2007 – said: ‘There is no life in the home.

‘She was really and truly the air that I breathe. That is all I live for, for her. I am in total shock. I do not know what to say.

Azra Kemal, 24, slipped through a 10ft wide void between two carriageways on a road bridge on the A21 between Sevenoaks and Tonbridge. She climbed over the barriers thinking that there was a central reservation between the carriageways before falling to her death

‘She had friends from North, South, East and West. She did not have postcodes. She bridged that gap. She came good. She was such a giver, she was so bright and feisty.

‘What I have heard from all her friends is that Azra would give love and try to help. She was no angel but she had that quality.

‘There was no judgemental bone in her body.

‘She was my world. I can’t cry anymore. She doted on me and I doted on her. She was a beautiful soul. She always used to say: ‘I am an old soul’.

‘She was driving along the A21 with friends in the car. They were swapping drivers. She rang about 2.30am to tell me something, that she was coming back.

‘I came downstairs and I knew she was not coming home and I could not ring her back. There was a fault with the car and it started to smoke.

‘They got out of the car and moved away from the car. Then it exploded. They were trying to wave people down and also they crossed the central reservation.

‘She climbed up and there was no concrete. This reservation was not there. It was pitch black so she has fallen 40 feet to the earth.

‘She was still alive. The guy jumped down and could not see her.

‘She said ‘Don’t leave me here’. Fortunately an off-duty nurse was passing and saw the car and she called the paramedics. The accident happened at 2.34am and she was pronounced dead at 3.20am.

‘Her last words were ‘Please don’t let me die’.’

Ms Kemal, who now runs the charity Raising My Voice Foundation, added: ‘They need to have lights or signs. This was God’s will, as in the car decided to go on fire there. 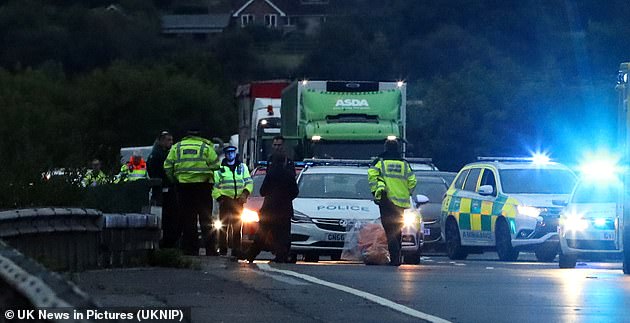 The accident happened around 2.30am on Thursday on a two span bridge – known as the Medway Viaduct. It has one bridge for south-bound traffic and a separate second bridge for London-bound traffic around 10ft apart 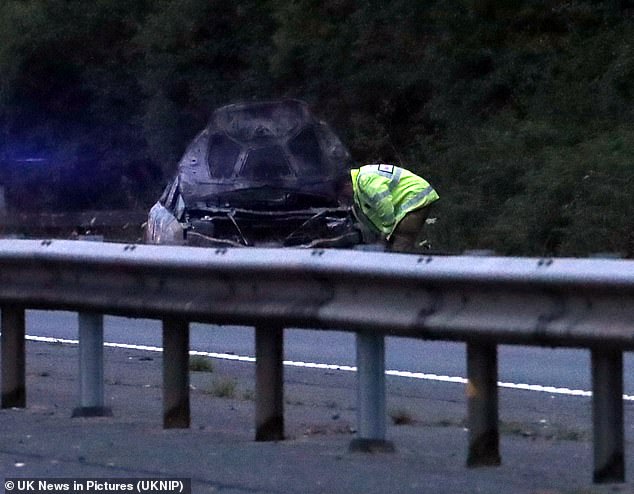 Despite an off-duty nurse passing at the time who called for paramedics and the best efforts of her friends to save her, she was pronounced dead at 3.20pm

Heartbroken friends  paid tribute to Azra at the family home.

Tamara Griffith said: ‘She was the most hard working person I have ever met in my life. She believed in things.

‘We were robbed of these great things to come. She was going to change the world.’

Rosie Gavan said: ‘There was no other Azra on this earth and I don’t think there ever will be.’

Aimee Rainbird said: ‘She was such a strong woman. She was so soulful, she was a light.’

Ms Rainbird added Azra had joined a pony club when she was younger and had always been ‘full of life and energy and potential’.

The London School of Economics law graduate, who was due to start a law practice course this year, was on her way home from a night out with friends and was in the car with a 31-year-old male friend when the engine burst into flames.

She had called her mother Nevres Kemal just minutes earlier to say she was on her way home from a night out with friends.

Azra and her friend got out and tried to flag down traffic on the opposite carriageway for help before she climbed over the barrier and fell 40 ft.

The accident happened around 2.30am on Thursday on a two span bridge – known as the Medway Viaduct. It has one bridge for south-bound traffic and a separate second bridge for London-bound traffic around 10ft apart.

Despite an off-duty nurse passing at the time who called for paramedics and the best efforts of her friends to save her, she was pronounced dead at 3.20pm.

A Kent Police spokesman said: ‘Detectives investigating the circumstances around the death of a woman who fell from a bridge on the A21 are satisfied there are no suspicious circumstances and are now preparing a report for the coroner.

‘The woman, who was 24 and from London, is understood to have fallen while seeking assistance after a car she was travelling in caught alight.’

The 31-year-old man was initially arrested at the scene as police worked out what happened. But he has now been released without charge.

Officers are now preparing a report for the coroner and are urging motorists with video footage to come forward.

Anyone with information should call Kent Police on 01622 604100, quoting 16-0120. Anybody with video footage can make a report through the Kent Police section of the Major Incident Public Reporting Site: https://mipp.police.uk/

You can also contact Kent Crimestoppers anonymously on 0800 555111, or by completing an online form at www.crimestoppers-uk.org