A plus-size model as skyrocketed to online fame after the expertly clapped back at a man who turned her swimsuit photo into a body-shaming meme.

Lesego Legobane, a South Africa-based model, blogger, and photographer known as ‘ThickLeeyonce’, was surprised to learn that one of her photos was featured in a sexist meme created by Twitter user Leyton Mokgerepi on Tuesday.

The meme features a photo of a slender model on the left and Lesego’s curvaceous swimsuit photo on the right with the caption: ‘Girls that I like vs Girls that like me.’ However, it was Lesego who ended up having the last laugh.

Take that: Lesego Legobane, a South Africa-based model, blogger, and photographer known as ‘ThickLeeyonce’, had a brilliant response to a man who body shamed her online 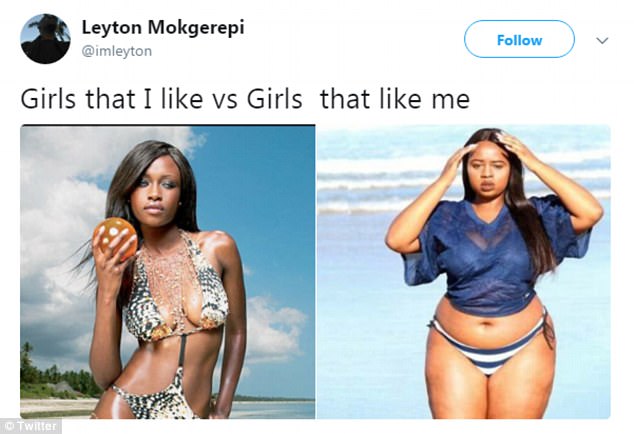 Four simple words: Lesego hit back at Leyton by tweeting: ‘I don’t like you’ 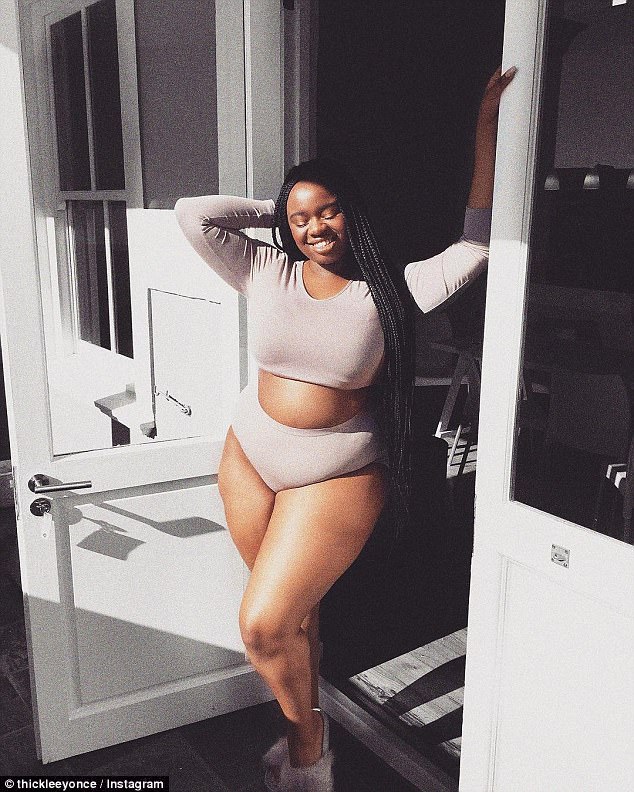 Using just four words, Lesego had the internet going wild after she hit back with a simple, yet effective message.

‘This dude made a fool of himself with a weak attempt to use a beautiful woman in a sexist meme. Guess what, she not that into him either,’ ‘BloggendBewegen’ tweeted.

Goals: Melissa Blue believes Lesego’s message ‘might be the best clap back of 2017

‘She’s not that into him’: Twitter user ‘BloggendBewegen’ said the ‘dude made a fool of himself’

Questions: Jesse Berney questioned why Leyton was still online ‘after his destruction’ 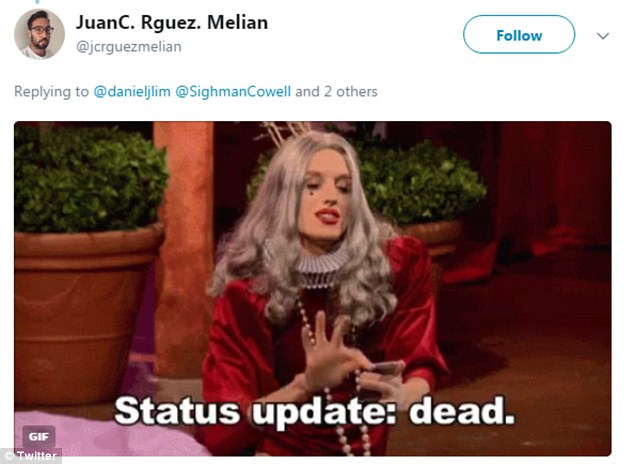 ‘Why is he still online after this destruction?’ tweeted Jesse Berney, and Laura Saba added: ‘I would like to report a murder.’

And Melissa Blue stated that ‘this might be the best clap back of 2017.

To Lesego’s delight, the tweet even scored likes from Ariana Grande, Nicki Minaj and Ava DuVernay.

Leyton eventually tried to backpedal on his original tweet by sharing Lesego’s photo again, only this time he labeled her ‘girlfriend goals’.

However, people weren’t buying his sudden change of heart. 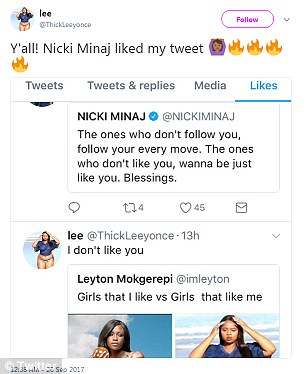 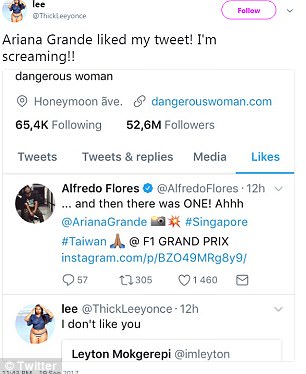 Amazing: Lesego’s tweet was even liked by Nicki Minaj and Ariana Grande 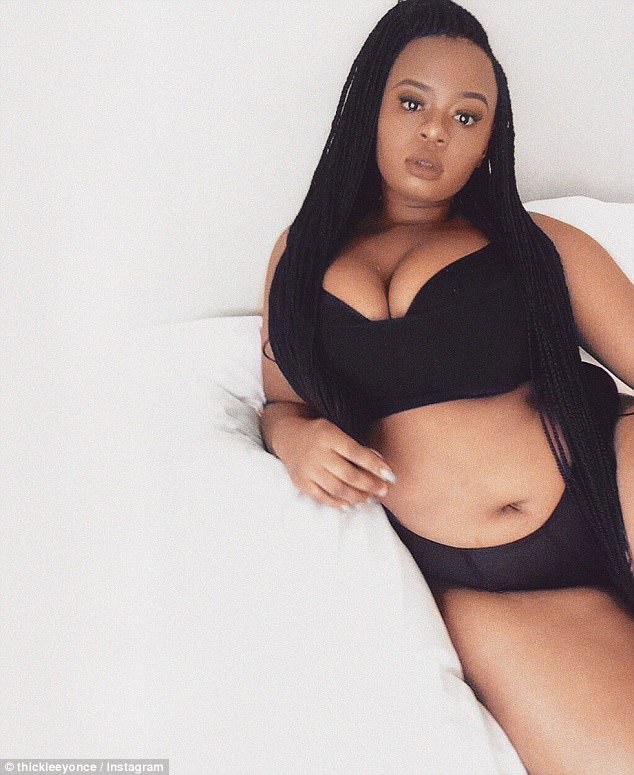 Wise words: ‘I can be fat and still be out of your league,’ Lesego noted 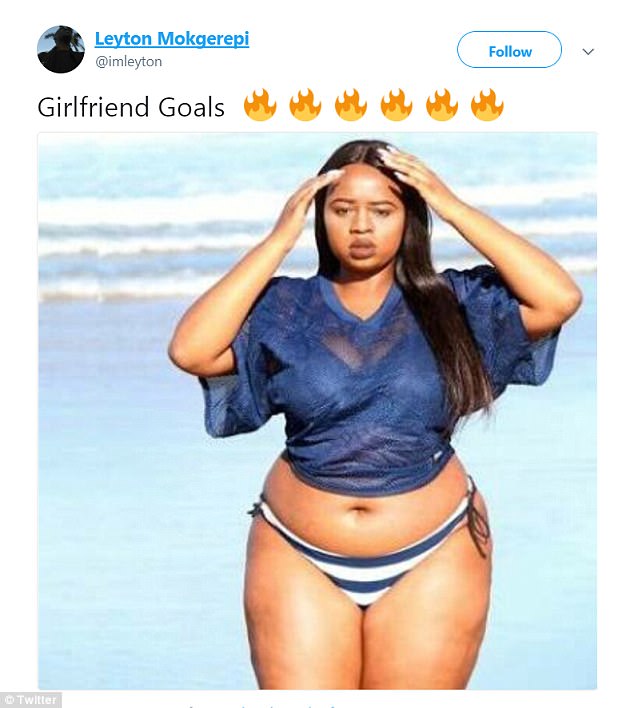 Backtracking: Leyton returned to Twitter to say that Lesego is ‘girlfriend goes’

‘Too little too late’: Plenty of people saw through Leyton’s attempt to get back into Lesego’s good graces

Proof: A man named Johnny noted that Leyton left the body-shaming meme on his Twitter feed 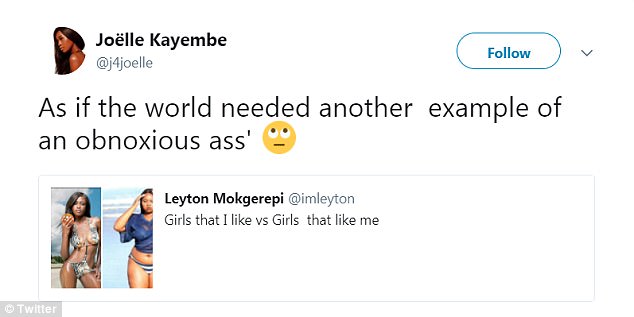 Over it: Joëlle Kayembe, the other woman featured in the meme, also clapped back at Leyton

‘I love how he attempted to redeem himself while still leaving the other tweet up as proof,’ a man named Johnny wrote.

‘I hate it when men think that fat girls are desperate and that we like every other guy ’cause “we don’t have options,”‘ Lesego told BuzzFeed News.

‘It’s utter nonsense. I can be fat and still be out of your league.’

Meanwhile, the other woman featured the meme also had a few words for Leyton.

‘As if the world needed another example of an obnoxious ass,’ Joëlle Kayembe tweeted.