Boris Johnson has launched a lobbying offensive to persuade big business to spend more than £40billion on green projects over the next decade, The Mail on Sunday can reveal.

Sources said the meeting was called to drum up billions of pounds of private sector investment in solar, wind, hydrogen power and nuclear projects.

French energy group EDF – which has committed to spending billions on wind, nuclear and solar over the next 50 years and is waiting for Ministers to greenlight its Sizewell C reactor in Suffolk – was also at the virtual roundtable.

The proposals include so-called ‘green gilts’ – newly created Government bonds that will finance projects that will reduce the UK’s carbon emissions.

Last night, a spokeswoman for No10 said the Prime Minister held the meeting with business leaders ‘to hear directly from them about the role they can play and how we can work together’.

She added that the ten-point plan ‘sends a clear signal to industries across the economy to invest in the UK’.

Johnson last week pledged to invest £12billion in the green industrial revolution to create up to 250,000 jobs through clean technologies such as offshore wind, hydrogen, electric cars and carbon capture.

Sharma said the Government is now ‘seeking to mobilise private investment’ and the ten-point plan could deliver up to £42billion of private funds by 2030.

However, the Government’s new ‘Net Zero Champion’ Andrew Griffith MP said the target of £42billion investment could be exceeded as more firms get behind the green agenda and commit to net zero targets. 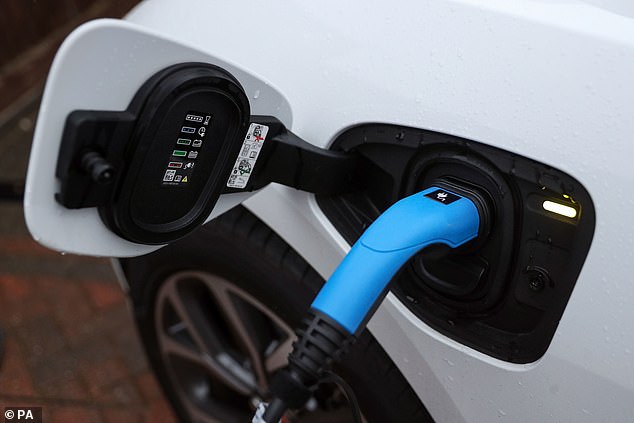 Griffith, Sky’s former finance chief, has been appointed to lead the next phase of the Government’s lobbying offensive and has held meetings over the past week with the chief executives of Rolls-Royce, Severn Trent and Scottish Power.

The three firms have jointly pledged to spend more than £11billion on green projects over the next five years.

Griffith told the MoS: ‘It is the job of the Government to prime the pumps, to provide a clear framework that investors can get behind, and then I am very confident there will be a huge wave [of investment].

‘Businesses and investors are talking about how big the opportunity is. I wouldn’t cap it [the investment] at that sort of level [£42billion].’

A source on last week’s call with the Government said the Prime Minister was ‘very enthusiastic’ as he presented his green industrial revolution – and major firms have responded by kickstarting their spending plans.

The MoS can reveal that aerospace giant Rolls-Royce – which is leading a consortium to develop up to 16 nuclear reactors – is set to establish a joint venture next May that will raise a further £300million to boost the £215million of grant funding the consortium was provisionally handed in the ten-point plan.

It said its first small modular reactors could be operational by the early 2030s, and a full fleet of 16 could provide 20 per cent of grid electricity by 2050.

The nuclear plants, which it hopes to build in Wales and Cumbria, could also power the manufacture of hydrogen for trucks and buses and synthetic aviation fuel for long-haul flights.

He said a second hydrogen plant, in partnership with Swedish firm Vattenfall, will follow at Herne Bay in Kent.

Severn Trent will spend £1.2billion on environmental projects over the next five years.

Griffith said he plans to meet as many businesses as possible to persuade them to sign up to net zero targets ahead of the UN climate change summit COP26 in Glasgow next November.