PM calls on all firms to reveal gender pay gap

Theresa May last night called on millions of small firms to publish their gender pay gap over fears it is not being closed quickly enough.

At present, it is only large companies with 250 or more staff who have been ordered to publish the difference between average salaries for men and women.

These companies will have to publish their gender pay data by April 2018.

But now the Prime Minister is encouraging smaller companies to do the same – saying progress to narrow the gap between male and female salaries was not good enough.

But last night the Federation of Small Businesses said the suggestions would be ‘challenging’ for smaller firms.

Mrs May’s call comes after figures showed this week that Britain’s overall gender pay gap had risen marginally, with women getting 18.4 per cent less on average than men.

However the gap for full-time workers has fallen to a record low – from 9.4 per cent last year to 9.1 per cent this year.

Yesterday Mrs May said companies needed to do more to close the pay gap.

She called on firms to make flexible working a reality for all employees.

And she also demanded renewed efforts to ensure progress on female representation at senior levels, including supporting women to progress to middle management and offering return-to-work schemes.

She said: ‘The gender pay gap isn’t going to close on its own – we all need to be taking sustained action to make sure we address this. 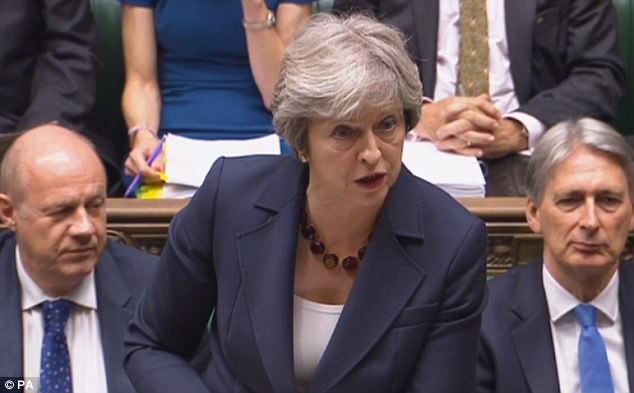 Mrs May’s call comes after figures showed this week that Britain’s overall gender pay gap had risen marginally, with women getting 18.4 per cent less on average than men

We need to see a real step-change in the number of companies publishing their gender pay data and offering progression and flexibility for all employees.

‘That’s why today I am calling on more businesses, both small and large, to take action to make sure the gender pay gap is eliminated once and for all.’

Mrs May said the Women’s Business Council, which she established as Home Secretary five years ago, will be advising her on progress and good practice in business.

However, Mike Cherry, national chairman of the Federation of Small Businesses, said: ‘All employers should be vigilant for inequality within their teams, and many medium sized businesses may well see the case for going further.

‘[But] for small firms, often with just a handful of employees and without HR support, absorbing another administrative process could be challenging.

‘There would also be practical issues in the pay calculations where the number of employees is small.’