Theresa May has ordered an end to ‘witch hunt’ investigations against veterans of the Troubles in Northern Ireland, it has been claimed.

The PM has reportedly told the attorney general to ‘find a legal solution’ to the series of claims against former British soldiers over deaths during the 1970s and 1980s.

Defence Secretary Gavin Williamson has opened a unit within the Ministry of Defence to examine what legal protections soldiers can be given.

Former Army chief Lord Dannatt said he was ‘glad to hear the Attorney General is on the case,’ the Daily Express reported.

Tory MP and Commons defence committee member Mark Francois said: ‘My colleagues and I, a number of whom are ex-servicemen, are absolutely determined not to let this matter drop.

‘Encouragingly the Attorney General, Geoffrey Cox, has now been tasked by the Prime Minister to try and find a legal solution to this problem.

‘We look forward to seeing what he comes up with but we shall keep up the pressure nonetheless.’

Last month the new head of the Armed Forces vowed to ‘stamp on’ bogus allegations of murder made against Northern Ireland veterans.

The Police Service of Northern Ireland has sparked anger by re-examining every British Army killing during the conflict. 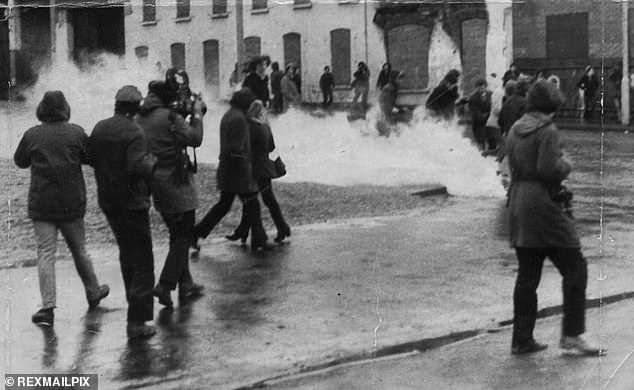 Theresa May has ordered an end to ‘witch hunt’ investigations against veterans of the Troubles in Northern Ireland, it has been claimed. Pictured: a gas canister explodes in Bogside in 1972

Some Tory MPs reacted with fury when Northern Ireland Secretary Karen Bradley launched a consultation document which did not include a statute of limitations.

Karen Bradley had raised concerns that any protections given to soldiers would ‘inevitably be extended to terrorists’.

Mrs May said: ‘What we do want to ensure is that we don’t see our servicemen and women and indeed in relation to legacy issues in Northern Ireland police officers being the sole subject of investigations, which is what is happening at the moment.

‘I want to ensure that terrorists are investigated for past crimes as well and that is why the Secretary of State has launched the consultation on legacy issues and it is of course open to people to respond to that consultation.’