Passengers on a luxury P&O cruise were forced to sleep at a sports venue in Monte Carlo after choppy seas meant they could not return to their ship.

The cruise liner Azura dropped its passengers off in Monaco but ‘un-forecast inclement weather’ meant they had to stay on the mainland on Saturday night.

No hotel rooms were available, so customers and were put up in makeshift conditions at a basketball court.

More than 1,000 passengers are thought to have been dropped off by small boats, many of them believed to be British nationals.

The stranded guests eventually travelled to Villefranche in France on Sunday and are now back on the ship.

Their next port of call is expected to be in Cartagena in Spain today.

Cruise line bosses said their priority was to keep guests in one place and no suitable hotel was available.

But some relatives grew worried for their elderly parents who were stranded in the temporary shelter.

One said: ‘It’s not nice, my Mum is 70 and didn’t have her medication with her. Just a little worried.’

Others waited anxiously for news from their relatives who had switched off their phones to save power.

According to Monaco media, two rooms were requisitioned at the Stade Louis-II, AS Monaco’s football ground. 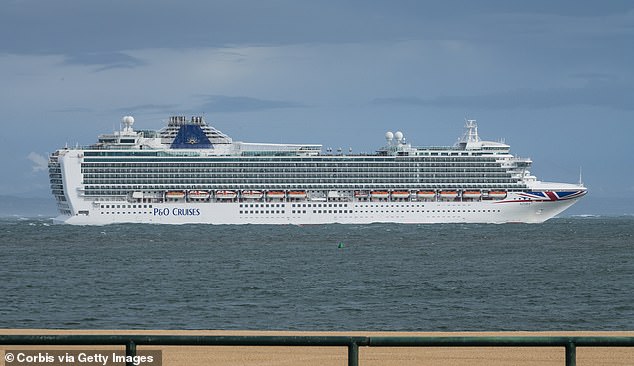 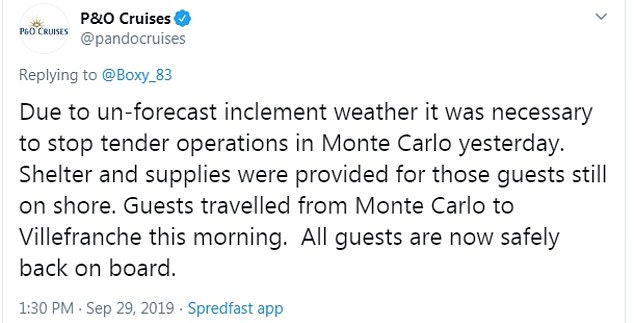 A P&O spokesman said: ‘Due to unexpected and unforecast poor sea conditions it was necessary to stop tender operations in Monte Carlo on Saturday.

‘Shelter and food were provided by the ship’s crew for those guests still on shore. Options were very limited due to a major event in Monaco, with no hotel rooms available.

‘Our priority was to find somewhere to accommodate all guests in one place so that our crew could support and look after them.

‘Guests travelled from Monte Carlo to neighbouring Villefranche on Sunday morning where the tendering operations were resumed.

‘All guests are now back on board and Azura is on route to Cartagena, Spain, the next scheduled port of call.

‘We are so sorry that this happened. It is certainly not what we would ever want for our guests but safety is always our absolute priority.

‘We are now doing everything possible to ensure that all guests have a wonderful time for the rest of their holiday.’