Poland as you’ve never seen it before, from epic mountains to fairy-tale castles

There can be few better adverts for a trip to Poland (when travel reopens) than this set of photographs.

They come courtesy of Karol Nienartowicz, from Krakow, who you won’t be surprised to learn is a professional photographer.

His images capture Poland’s most enticing aspects, from its fairy-tale castles and fascinating cities to its epic mountains, stunning lakes and lush green meadows.

Karol, 35, who is also an author, told MailOnline Travel: ‘Since the beginning of the pandemic, I have only managed to travel abroad a few times. That is why for over a year, I have been photographing places in Poland that I have not seen before.

‘The whole area in the south of Poland is occupied by mountains – these are the most beautiful places in my country. The Tatras – the highest Polish mountains – are a miniature of the Alps. There are many rocky peaks, beautiful blue lakes and green meadows.

‘Poland also has old and interesting cities with a rich history. It has a lot to offer people who like hiking in the mountains and visiting monuments.’ Scroll down to start your Polish adventure… 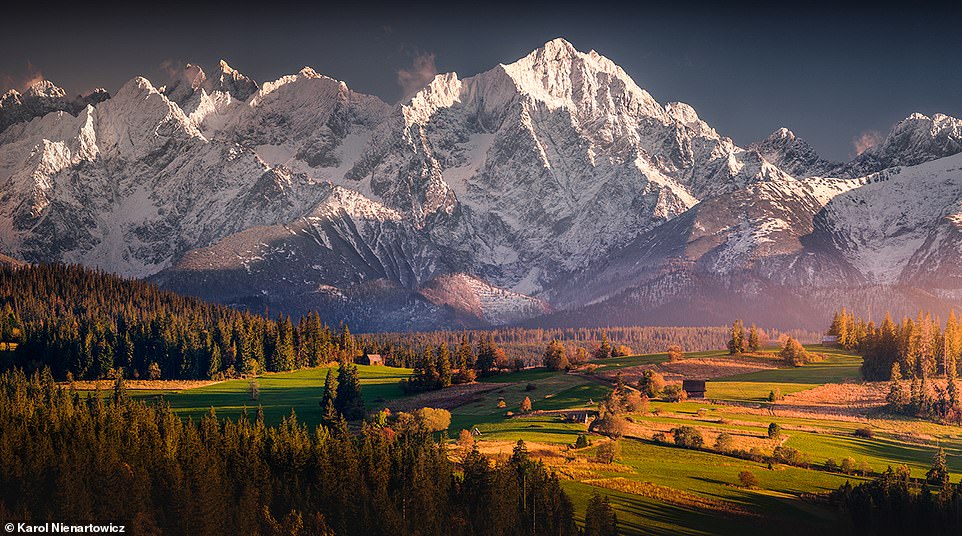 Karol said: ‘Autumn is definitely the most beautiful in Poland. We have great colours here in October. In the mountains, it is spectacular in winter, when everything is frozen and frosted.’ Pictured are the Tatra Mountains 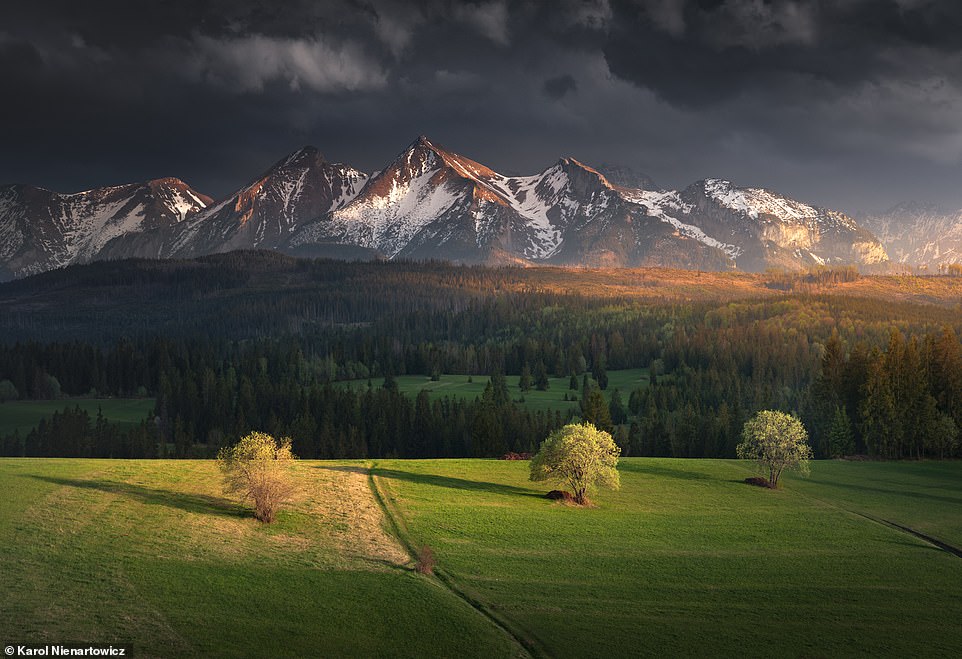 Another shot taken by Karol of the Tatra Mountains, this time from the village of Lapszanka. He described the range as a ‘miniature Alps’ explaining: ‘They are very interesting and effective. There are many rocky peaks, beautiful blue lakes and green meadows’ 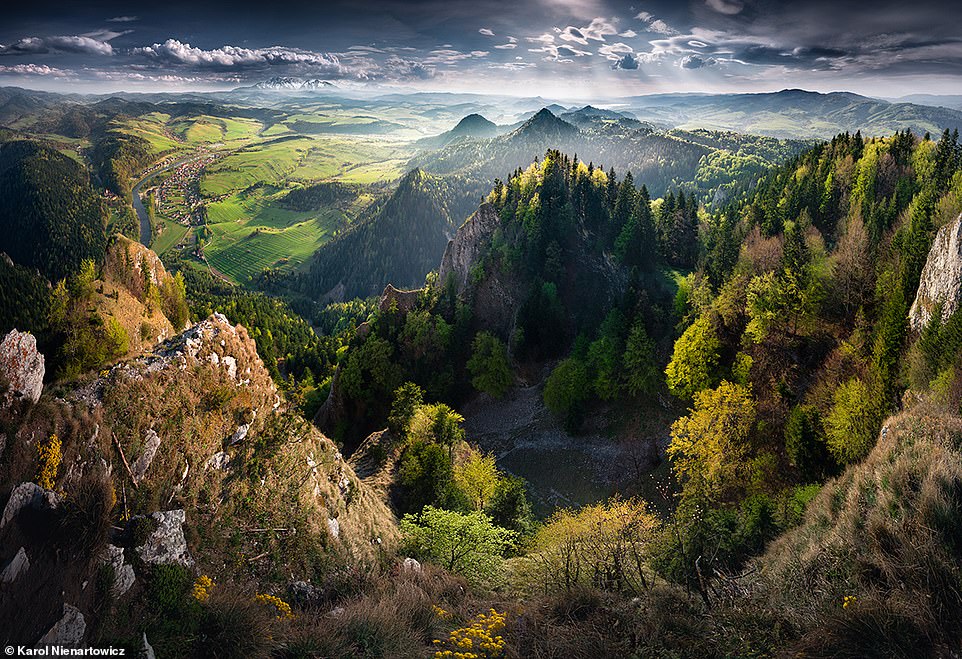 This breathtaking image was snapped from the top of Trzy Korony, which with a summit at 3,222ft (982m), is the highest peak in the Central Pieniny mountains. It is made up of five crags, with a viewing platform on Okraglica – the highest crag 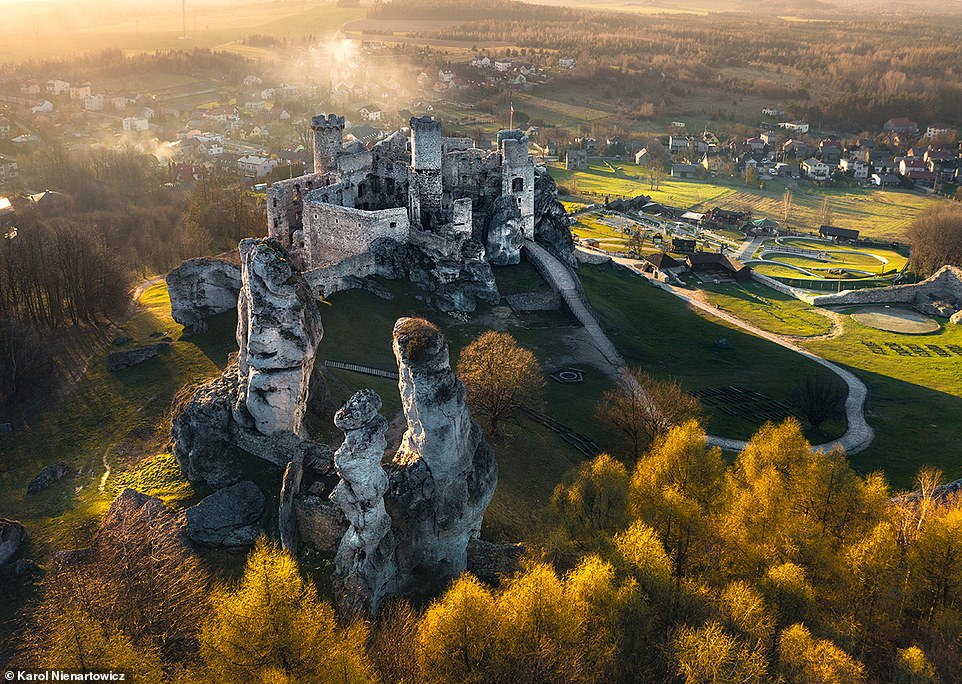 The imposing ruins of the 13th-century Ogrodzieniec Castle in Podzamcze, around an hour’s drive from Krakow. It sits on top of a 1,690ft (515m) mountain and is open to tourists. As the Polish Tourism Organisation points out, scenes for the 2019 Netflix series The Witcher, starring Henry Cavill, were shot at the castle 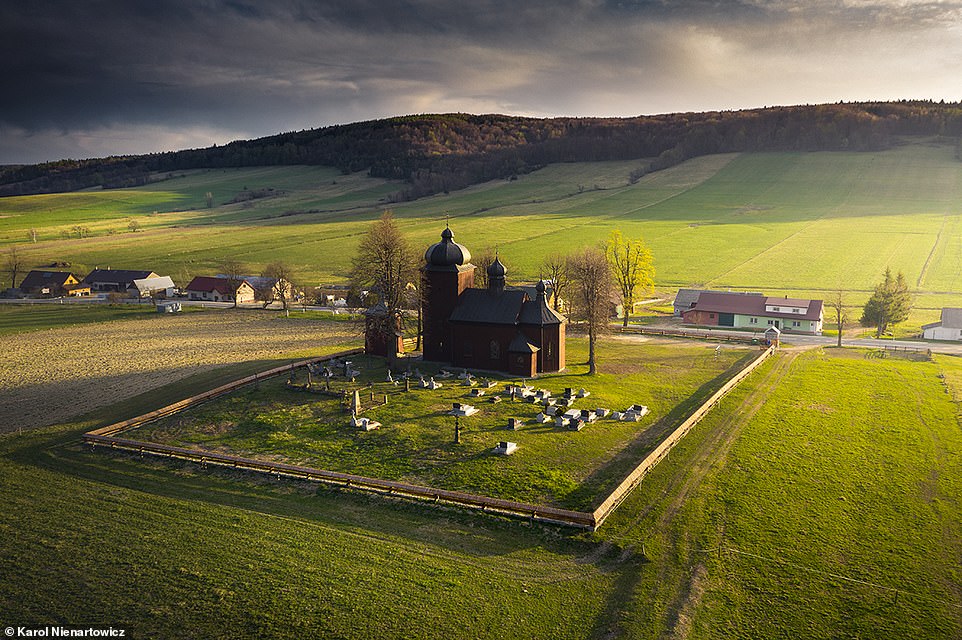 An aerial shot of the beautiful St Basil the Great Orthodox Church in the small village of Konieczna on the Polish/Slovakian border. Karol said: ‘Poland has a lot to offer people who like hiking in the mountains and visiting monuments’ 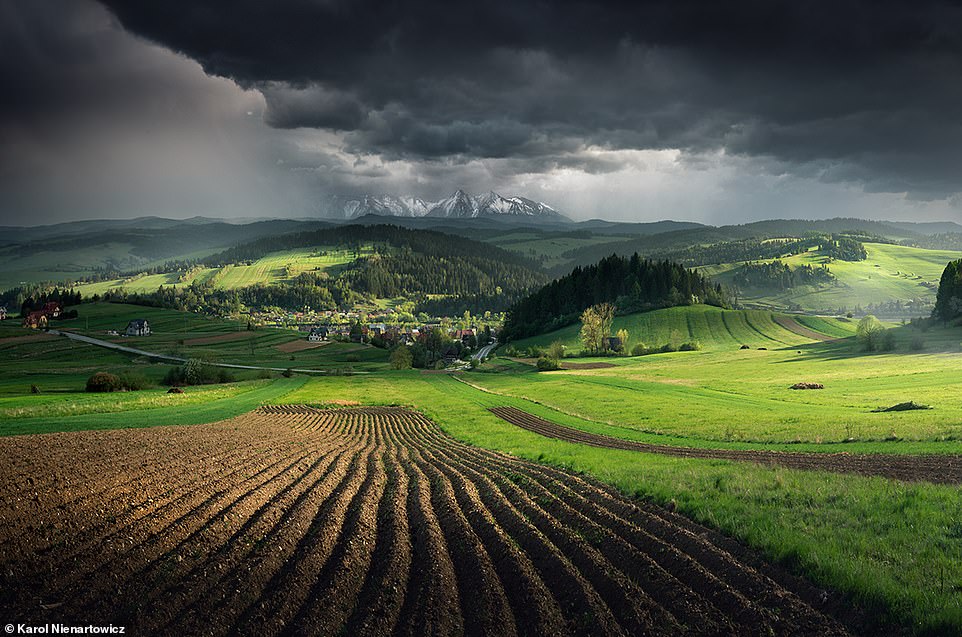 A dramatic scene of storm clouds brewing in Pieniny National Park in southern Poland. ‘Within its borders are the Pieniny Czorsztynskie, the Trzy Korony massif and the Pieninki’ mountains, says the Polish Tourism Organisation. It adds: ‘The pride of the park are the butterflies, especially the Apollo butterfly, which is found only in the Pieniny’ 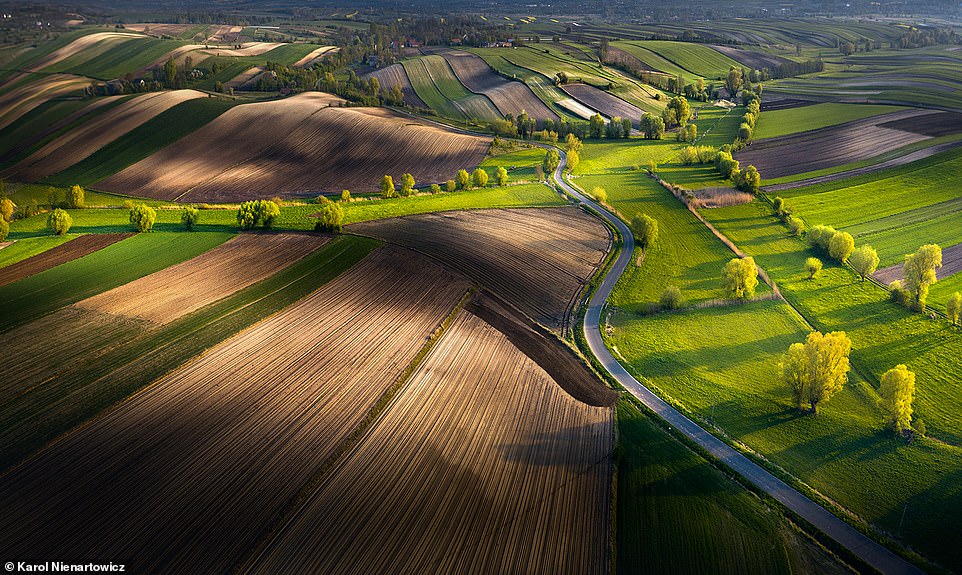 A breathtaking image of Poland’s Ponidzie region in the south of the country. According to Wildlife Worldwide, its ‘landscape and biological interest are protected in three parks, Nadnidzianski, Szaniecki and Kozubowski, and a number of nature reserves which feature meadows, peat bogs, fish ponds and relict steppe vegetation’ 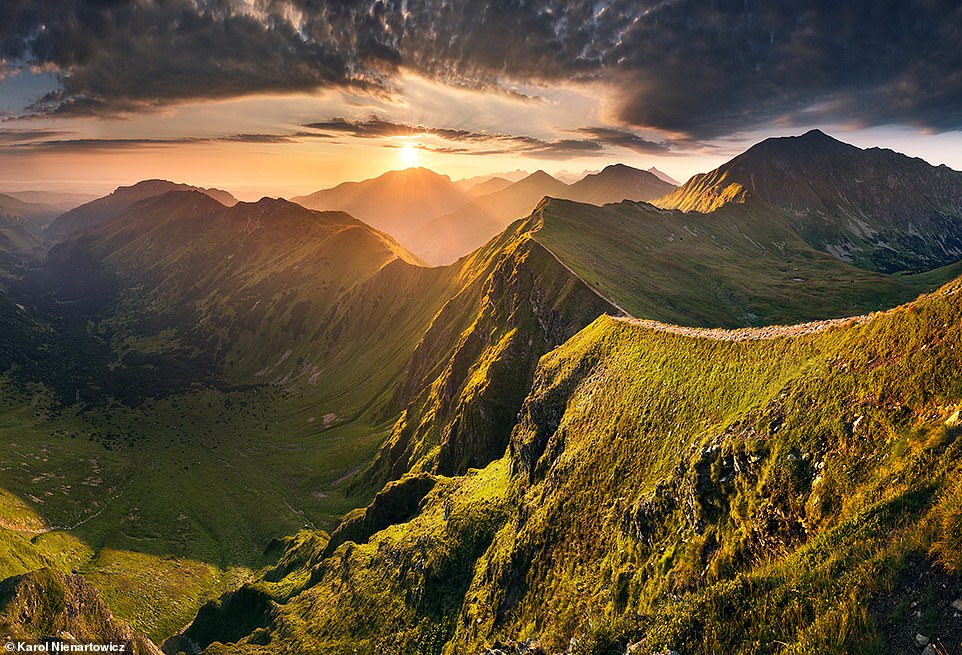 A stunning snap of the Western Tatras taken just inside Poland’s border with Slovakia. To the right, over the border in Slovakia, you can see Bystra, the highest mountain in the Western Tatras at 7,375ft (2,248m). Karol said: ‘The whole area in the south of Poland is occupied by mountains – these are the most beautiful places in my country’ 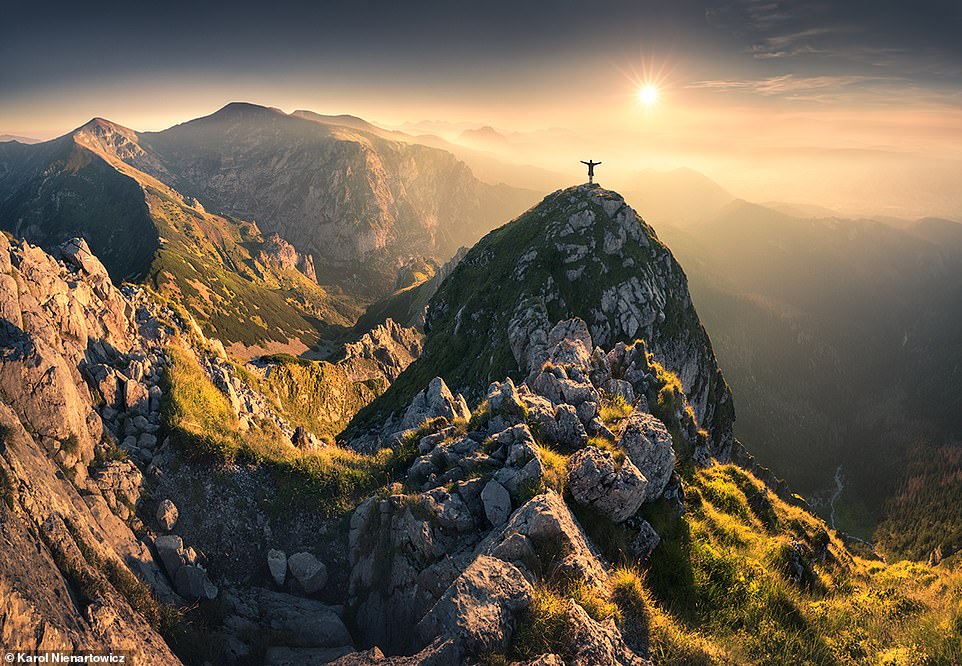 This image was snapped on the epic Giewont mountain massif in Poland’s Tatra National Park – close to the town of Zakopane.  According to Summit Post, ‘it is the most distinctive peak in the area and it has been referred to as the “Sleeping Knight”, based on its silhouette and old legend’ 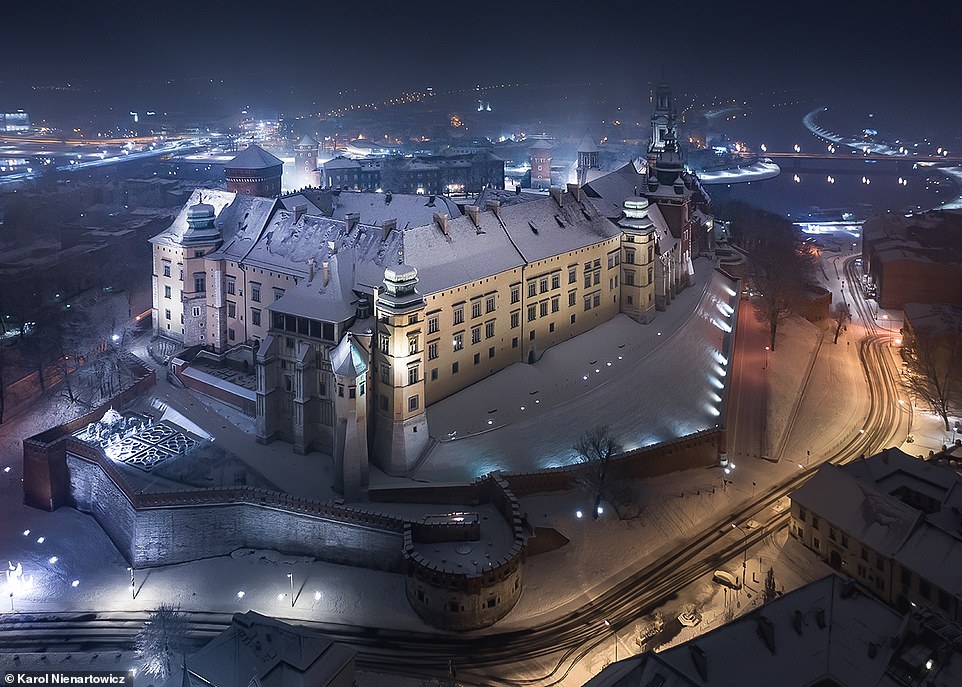 A mesmerising shot of Wawel Castle in Krakow, a former residence of the kings of Poland and now an art gallery. The building, which stands on a rocky outcrop called Wawel Hill, dates back to the 14th century and usually attracts one million visitors each year 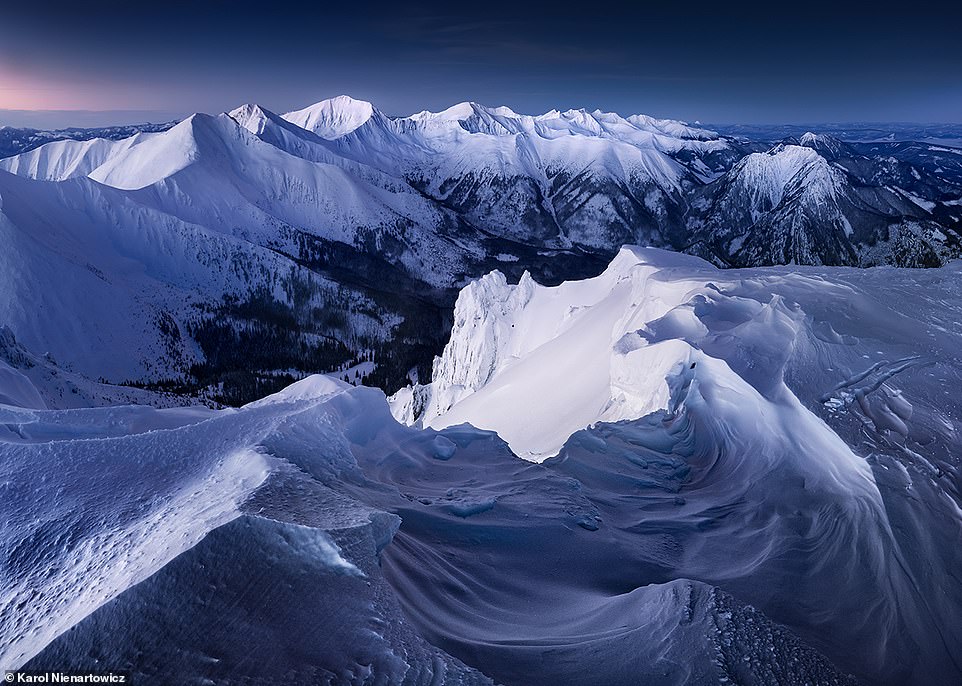 Karol snapped this mesmerising image at the top of Ciemniak, a 6,876ft (2,090m) peak in Tatra National Park, on a freezing morning when temperatures were a bone-chilling -20C 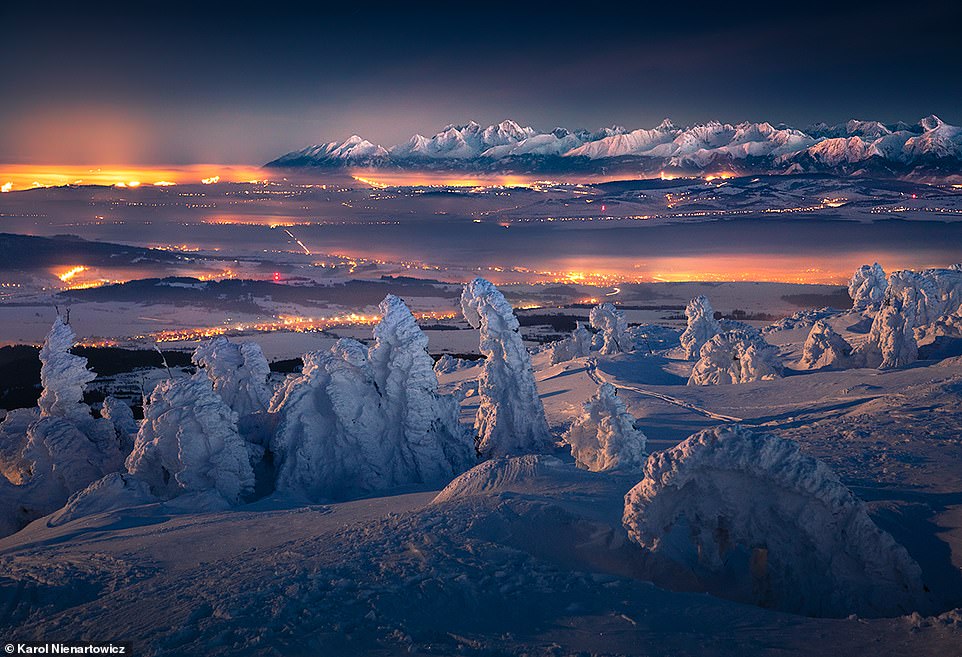 An incredible panoramic image of the Tatra Mountains from the slopes of Babia Gora – one of the highest peaks in Poland and the highest in the Beskid Mountains at 5,659ft (1,725m). It is on the border between Poland and Slovakia 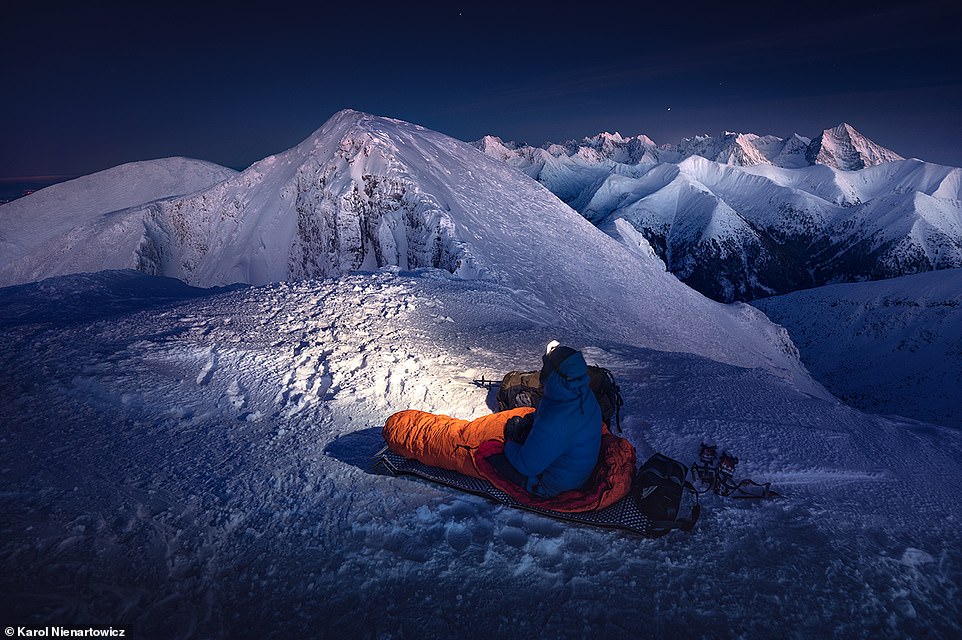 Karol waits for the moon to rise in this incredible shot taken in the Czerwony Wierchy range of the Tatra Mountains. He said a warm sleeping bag is crucial as there can be a lot of waiting around in cold temperatures to get the right conditions for taking pictures 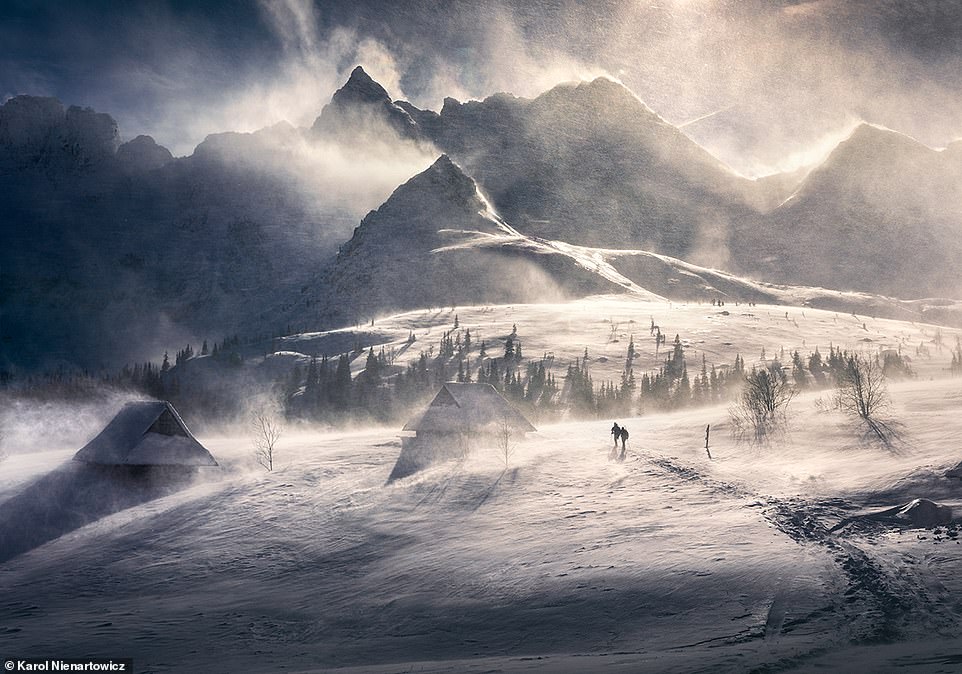 A stunning image of the Gasienicowa Valley in Tatra National Park. Karol said: ‘Poland has an area of over 300,000 square kilometres (120,726 square miles). There is a lot to discover here’ 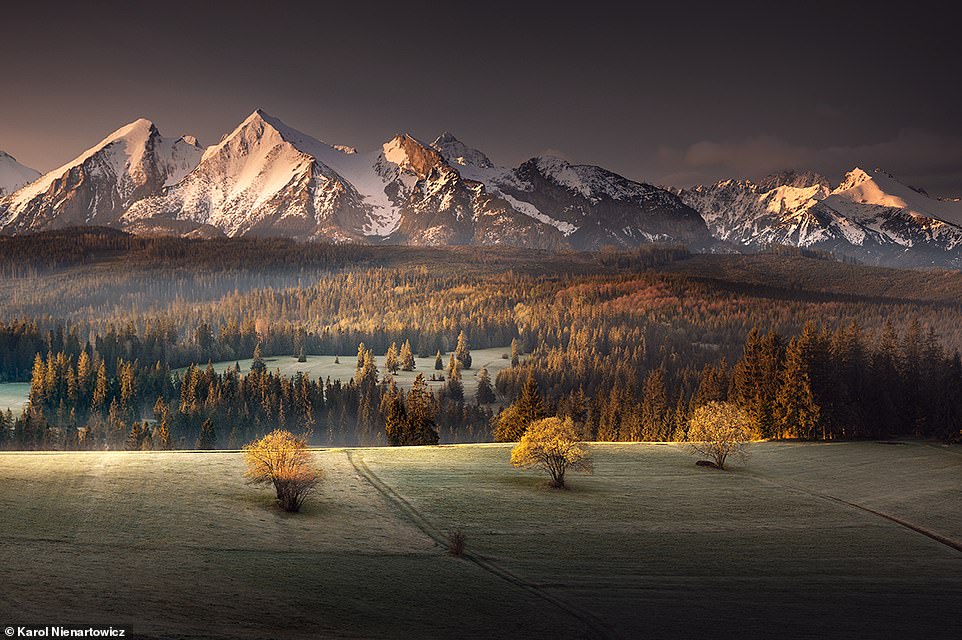 Although Karol enjoys taking images of cities, he much prefers snapping landscape shots. He explained: ‘I professionally photograph mountains, so landscape is the obvious answer.’ He captured this beautiful scene from the village of Lapszanka, which has a population of just 400 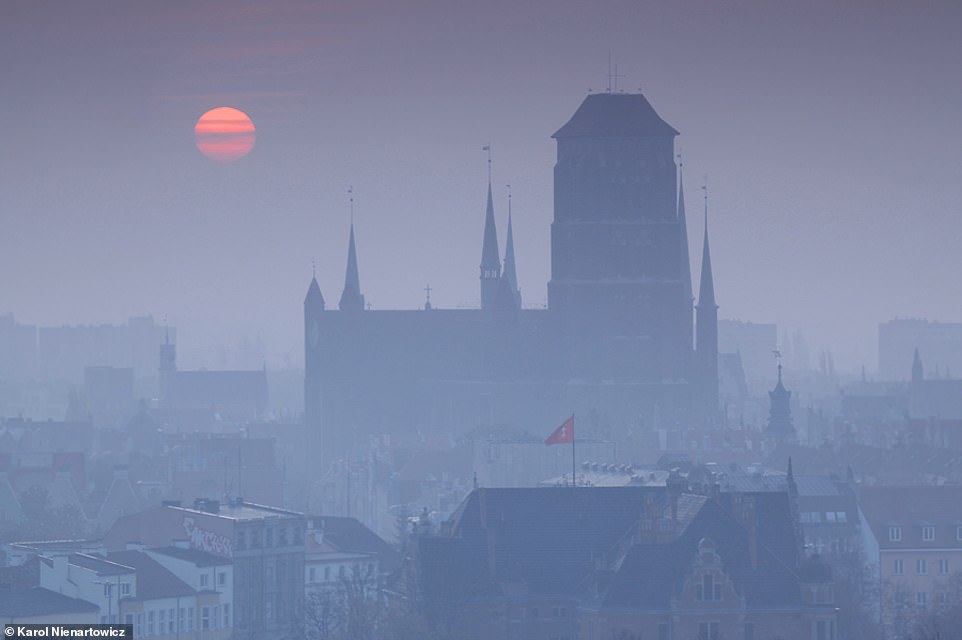 The beautiful St Mary’s Church in Gdansk towers over the rest of the city’s rooftops. According to Karol, the port city of Gdansk, on Poland’s Baltic coast, is ‘one of the most beautiful in Europe’ 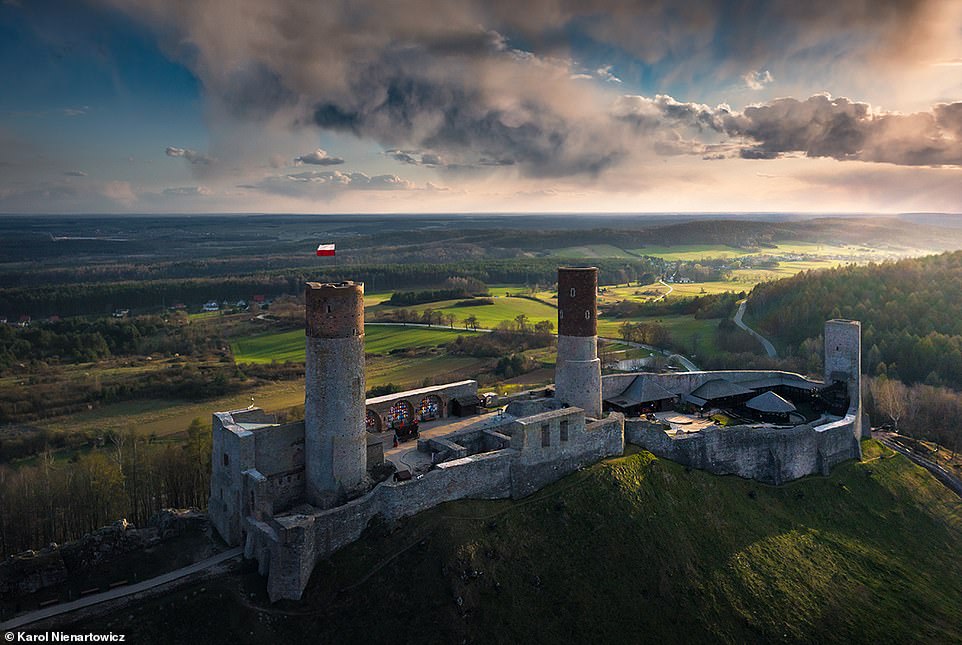 A striking aerial shot of the ruins of the 13th-century Gothic Checiny Castle in the town of Checiny, north of Krakow. The Polish Tourism Organisation says: ‘Currently, the castle in Checiny is one of the most visited heritage sites in Poland’ 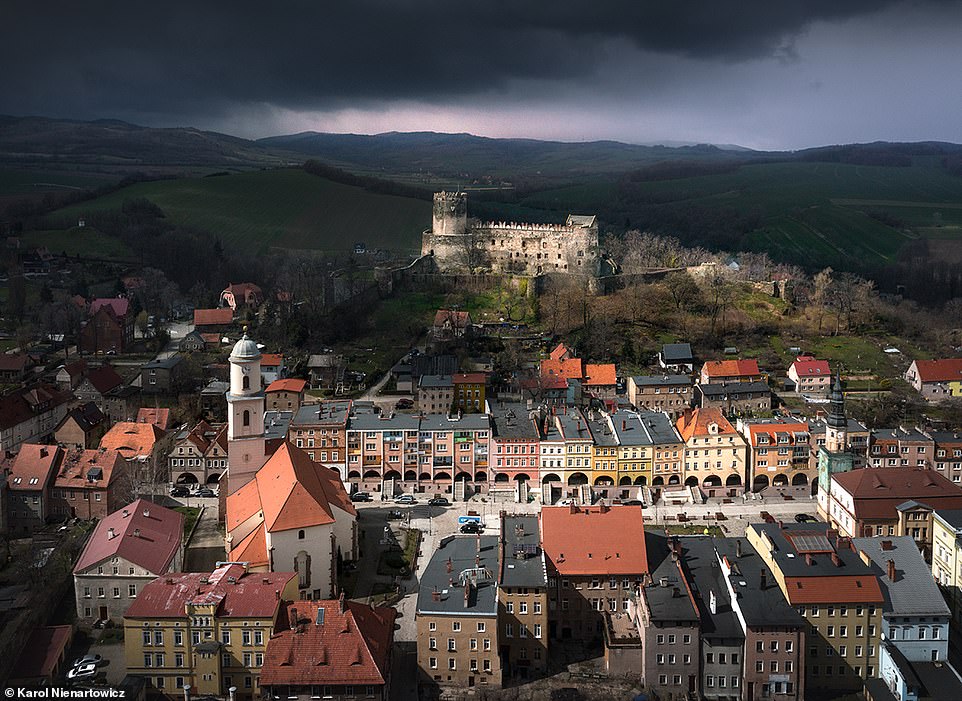 The grand Bolkow Castle towers over the town of Bolkow, in south-west Poland. The Gothic castle is thought to date back to the 13th century and one visitor to the castle wrote on Tripadvisor: ‘It is indeed an old beauty, if you are in area it’s very much worth seeing!’ 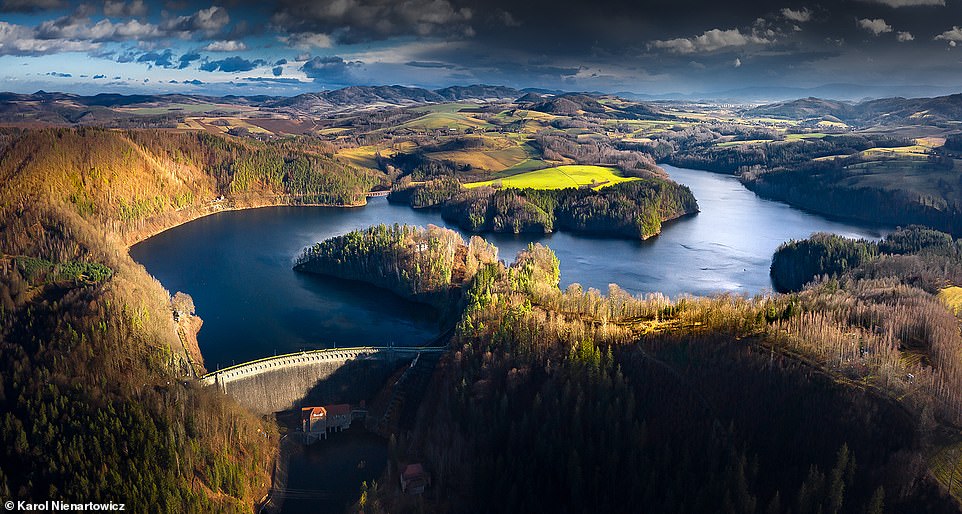 An amazing shot of Lake Pilchowickie near the town of Jelenia Gora in south-west Poland. It was created as a result of the building of the Bobr Dam in 1912. Poland Travel Tours says: ‘There is a railway bridge extending over the lake – it is an especially romantic place for taking photos in the autumn’ 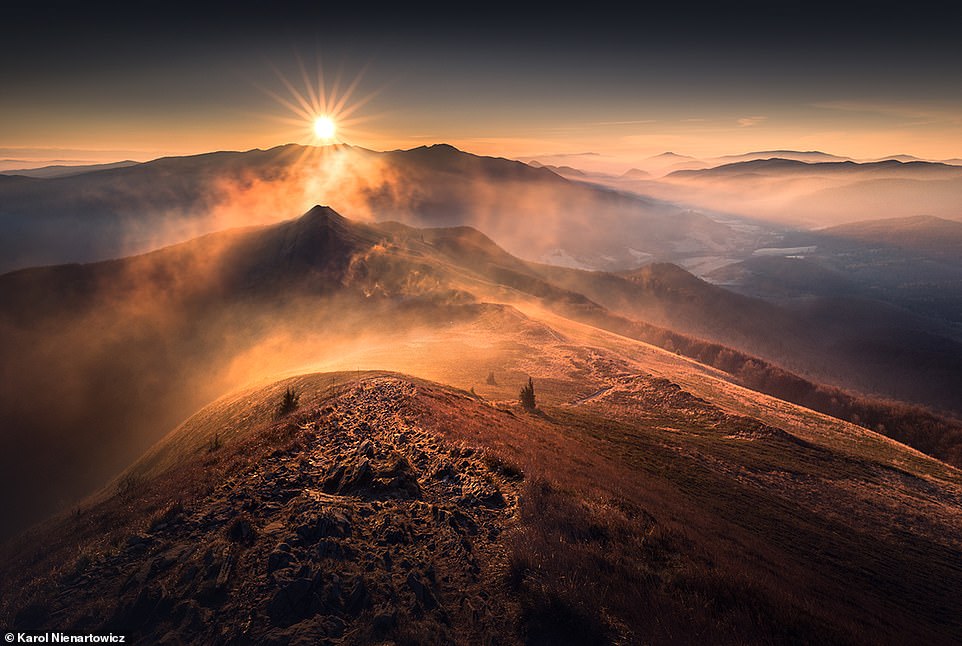 Karol snapped this jaw-dropping image in the Bieszczady Mountains, which run through the extreme south-east of Poland and into north-east Slovakia and are part of the wider Carpathian Mountains. It is a place that Karol often visits 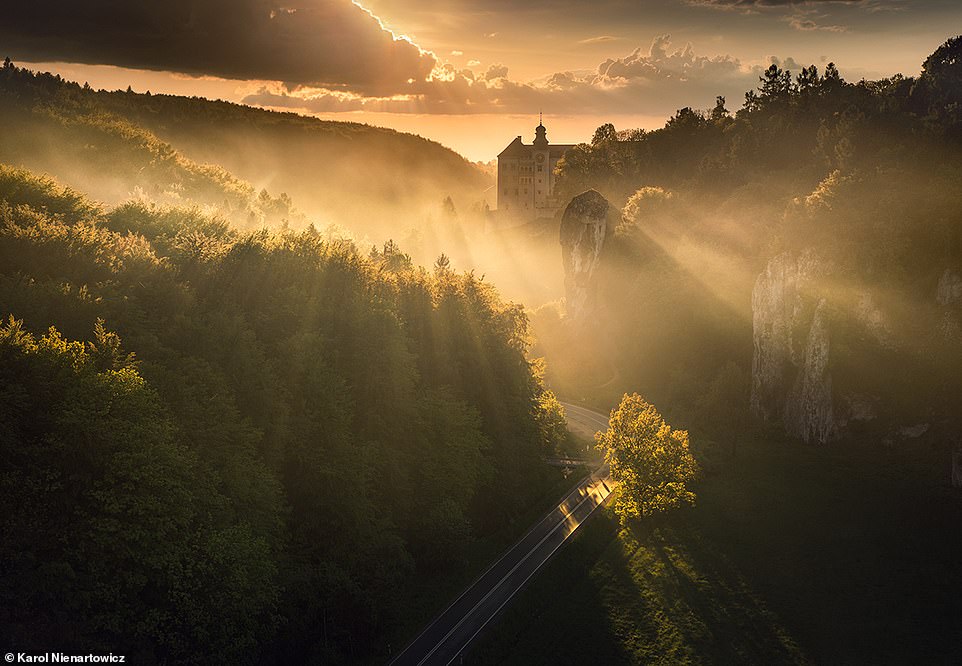 A beautiful shot of Pieskowa Skala Castle, which is around 17 miles north of Krakow in Ojcowski National Park. Lonely Planet says: ‘If you can only do one thing in Ojcow National Park, visit this 14th-century castle, one of the best-preserved castles in the upland’ 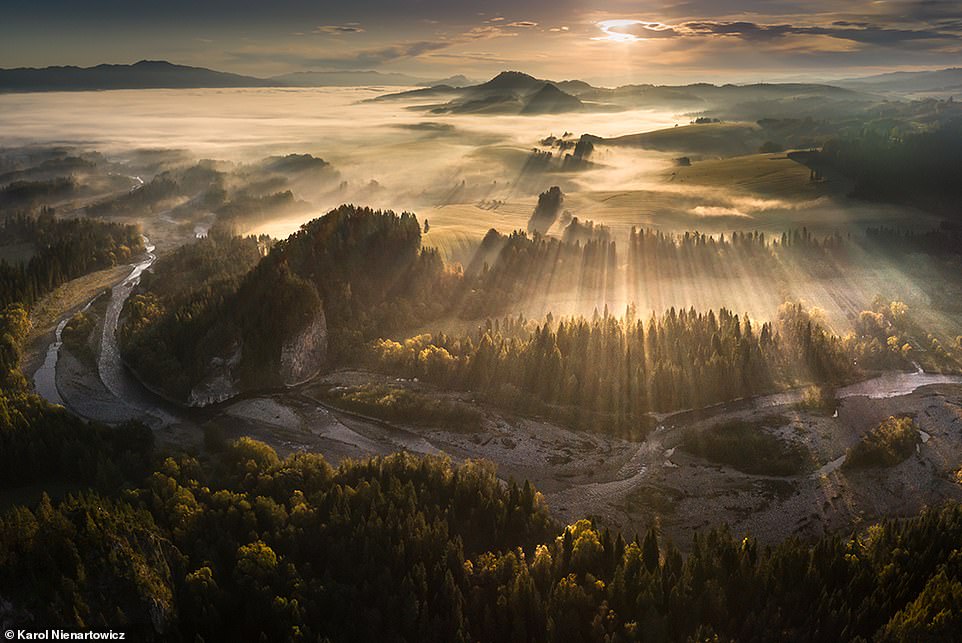 A breathtaking shot of the Bialka River, a mountain river that runs for 24 miles (40km) through southern Poland from its source in the High Tatra mountains