The findings, which have been bitterly contested by environmental scientists, found the growing bear population is posing a threat to the native population in northern Canada.

Scientists say that climate change has pushed bears closer to humans and that the population is not actually growing.

The report, which was drafted by the Nunavut government in northern Canada, estimated that polar bear populations are much higher than scientists have previously estimated.

‘Inuit believe there are now so many bears that public safety has become a major concern,’ said the document, according to Canadian website Windsor Star.

‘Public safety concerns, combined with the effects of polar bears on other species, suggest that in many Nunavut communities, the polar bear may have exceeded the co-existence threshold.’

According to scientists just one population is growing but the report claims there are nine.

The findings, which will be discussed in Iqaluit this week, say that ‘no declines have currently been attributed to climate change’.

The report consists of submissions from Inuit groups across Canada’s northern territories and will be finalised later this year.

Experts have criticised the findings as being just ‘plain wrong’.

However, he says that this is because climate change is reducing the size of the sea ice.

‘They will move into communities seeking food’, he said.

Around 16,000 polar bears are estimated to live in the arctic regions of Canada, which is 65 per cent of the total global population.

It is estimated that three per cent – or 600 – are killed annually, mostly by Inuit hunters. 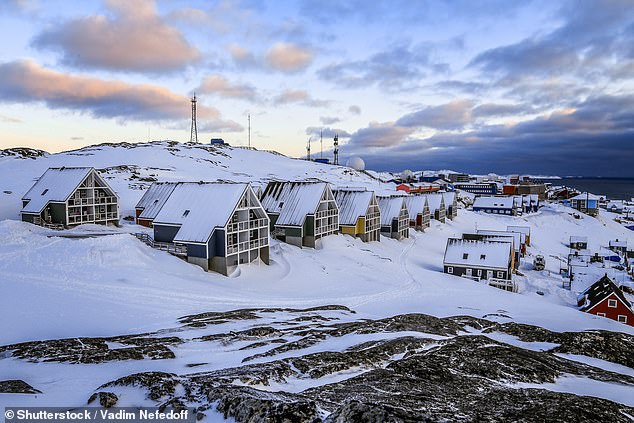 The report, which has been bitterly contested by environmental scientists, found that the growing bear population is posing a threat to the native population (stock image)

Although hunting quotas are not set to increase immediately it appears that could be a reality at some point.

The report says that management objectives ‘could include managing polar bears for a decrease.’

Inuits say their own observations are often ignored.

‘We know what we are doing, and western science and modelling has become too dominant,’ wrote the Kitikmeot regional wildlife board as part of the report.

The report comes just months after Canadian man was killed by a polar bear while trying to protect his children.

Aaron Gibbons, 31, was visiting Sentry Island with his family when he spotted the bear near Hudson Bay charging towards one of his kids.

Frantically he sent them running back to their boat and put himself in between them and the animal.

The bear mauled Gibbons Tuesday evening around 7:30 and it was shot dead afterwards by another individual who ran onto the scene to help.

WHY DO POLAR BEARS NEED ICE TO SURVIVE?

Loss of ice due to climate change has a direct impact on the ability of polar bears to feed and survive.

The bears need platforms of ice to reach their prey of ringed and bearded seals. Some sea ice lies over more productive hunting areas than others.

Like other predators at the top of the food chain, polar bears have a low reproductive rate. One or two cubs are born in midwinter and stay with their mother for two years.

Consequently, females breed only every three years. The bears don’t reproduce until they are five or six years old.

From late fall until spring, mothers with new cubs den in snowdrifts on land or on pack ice. They emerge from their dens, with the new cubs, in the spring to hunt seals from floating sea ice.

Simply put, if there isn’t enough sea ice, seals can’t haul out on the ice, and polar bears can’t continue to hunt.

End of summer measurements of sea ice in the Arctic in September revealed that the region has hit the eighth lowest extent in modern record keeping.

While the Arctic hits its summertime minimum around this time every year, the experts say the extent has been decreasing rapidly as a result of climate change, seeing dramatic declines since the late 1970s.