A Polar Vortex has blasted into the northeast with record low temperatures, gusty winds and a potential to drop up to 12 inches of snow in New England.

Additionally, more than 100 all-time record low temperatures in May could be broken this weekend.

The National Weather Service revealed on Thursday that the northeast would see an unexpected drop in temperature as polar air blew in from  Canada.

States like New York, New Hampshire and Vermont have already seen snow this weekend as experts point out the abnormal climate.

Some states in New England, including Vermont (pictured), received snow this weekend after a polar vortex blew in from Canada

‘The fact that it’s pushing so far south is what’s unusual about it,’ Accuweather meteorologist Tom Kine told the New York Post.

‘It’s just Mother Nature not being nice. She was nice most of the winter because we didn’t have to deal with any snow or anything, maybe she’s getting even.’

Additionally, a second storm coming in from Pennsylvania will help the polar vortex push further into the southeast.

The Northern Plains and Upper Midwest will see temperatures up to 25 degrees below normal seasonal weather, which is in the 60s.

A map from the National Weather Service shows the stark contrast in temperature between the East Coast and the West Coast. 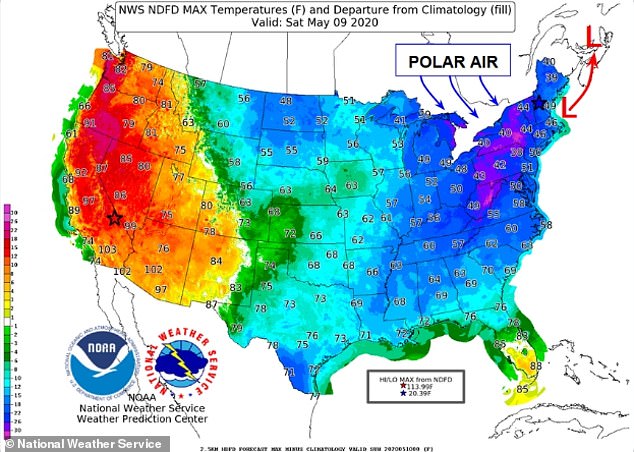 Death Valley, California, has a high of 110 degrees on Saturday while Mt. Washington, New Hampshire will level out at 10 degrees

‘For those in the east…no, you are not hallucinating…these are the actual forecast high temperatures on Saturday, May 9th,’ the NWS wrote on Twitter.

‘Yes, May! Near a 100 degree difference across the U.S. between the expected lowest max on Mt. Washington, NH to the highest max in Death Valley, CA.’

On Saturday, Death Valley is expected to reach a scorching temperature of 110 degrees, while Mt. Washington has a low of just 10 degrees.

Similarly, Accuweather said that places in New England and even Atlanta, Georgia, will be colder than parts of Alaska this weekend.

Fairbanks, Alaska, will reach a high of 79 degrees on Sunday and temperatures 73 degrees in Atlanta. 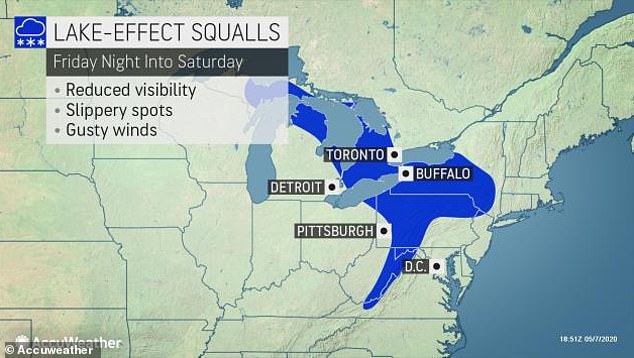 ‘What a pattern across the United States! Look at that big jet stream across the eastern U.S. Meanwhile, in the West, it’s totally opposite, polar opposite, where we’re looking at record warmth,’ said AccuWeather Chief On-Air Meteorologist Bernie Rayno.

‘It will be warmer in Alaska than it will be in Atlanta, Georgia. That’s something.’

Although May is expected to bring sunshine after a chilly winter, temperatures in the northeast will hover between the 40s and 30s for most states.

More than 100 record low temperatures on the eastern half of the United States are in jeopardy of being broken this weekend.

CBS News Meteorologist and Climate Specialist Jeff Berardelli noted that cities like Pittsburgh, Nashville and Washington D.C. were among those places.

In Washington D.C., temperatures inched closer to the 33 degrees record on Saturday with low of 36 degrees.

Nashville was only six degrees off from its 34 degrees record low, as well. 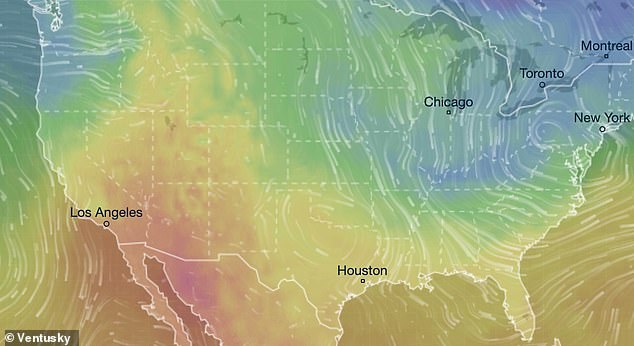 Pictured: a Ventusky map shows the cool temperatures in the eastern half of the United States on Saturday

In New York, some residents saw flurries drop into their backyards and the NWS reported there was snow in Central Park.

‘Snow in Central Park! In May!’ they wrote. ‘The Central Park Automated Surface Observing System (ASOS) recorded snow. This ties the record snow set in 1977.

The late snowfall may have been helped by the blast of chilly air that blew in from the Arctic Ocean.

‘Typically, this time of year we should be seeing temperatures well up into the 60s and in the afternoon, near 70,’ said Kline.

‘This is exactly [the type of weather] you’d see during the winter months and it’s something that typically does not happen in May.’. 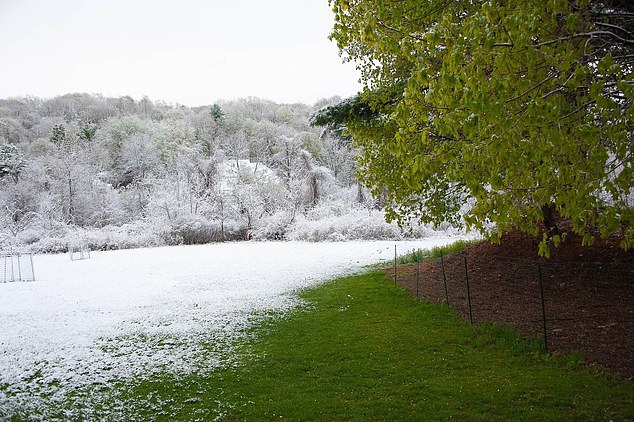 Parts of New York received snowfall on Saturday, including Central Park which saw its latest seasonal snowfall in May in 1977 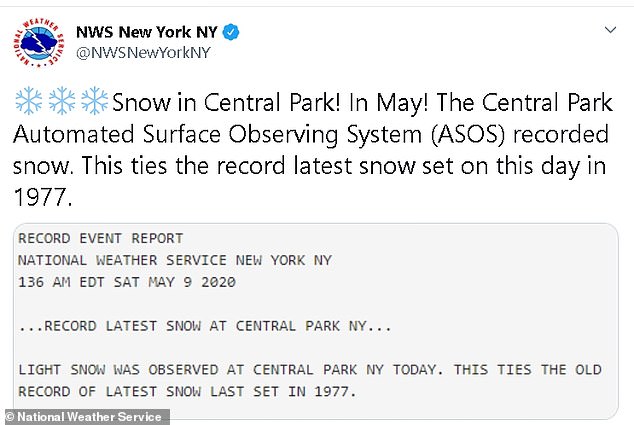 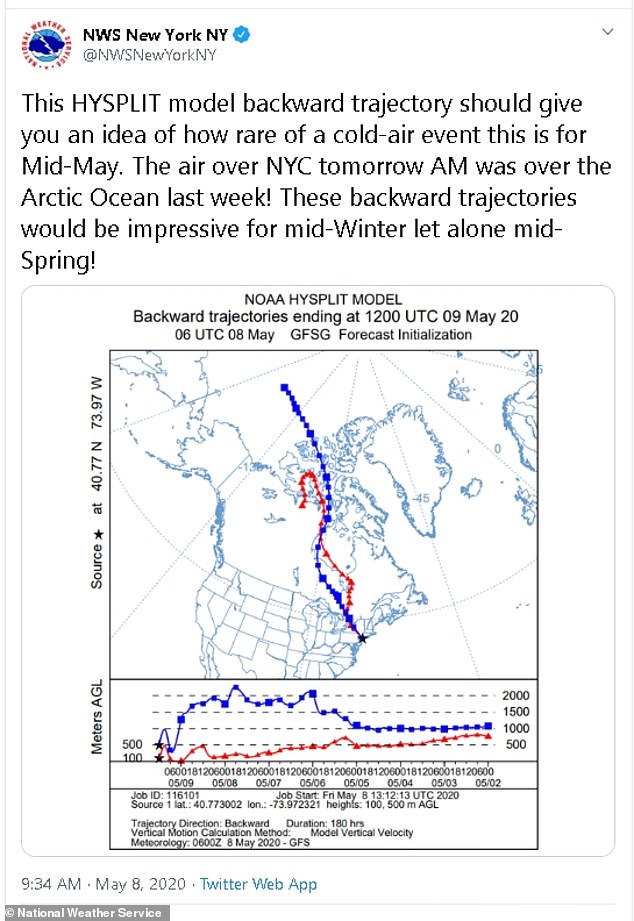 Pictured: a National Weather Service picture shows the trajectory of cold air from the Arctic Ocean to the US

‘Mainly Saturday is the cold day of the weekend and temperatures will moderate on Sunday. Sunday by far is the best of the two weekend days and that’s the way it should be with Mother’s Day coming up,’ said Kline.

Parts of New Hampshire will receive one to three inches of snow this weekend. Some might see as much as six inches by day’s end.

The New Hampshire Union Leader reports that the state’s latest snowfall this month was on May 13, 1914. Residents saw a half-inch of snow.

New Hampshire’s temperatures will be between 10 to 15 degrees below average.

A photo shared on Twitter shows a resident’s back patio and chairs completely covered in snow. 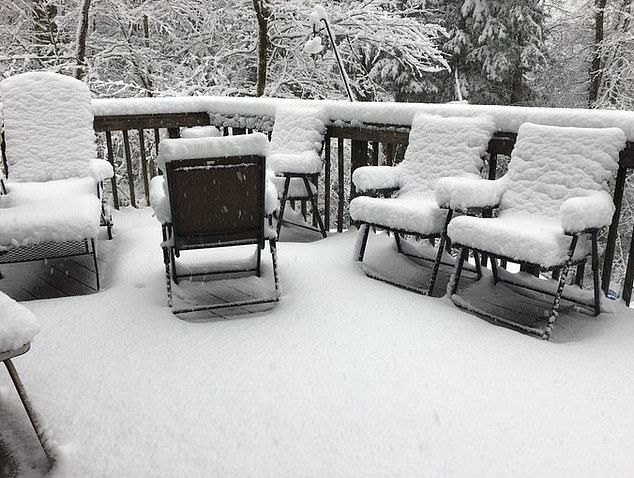 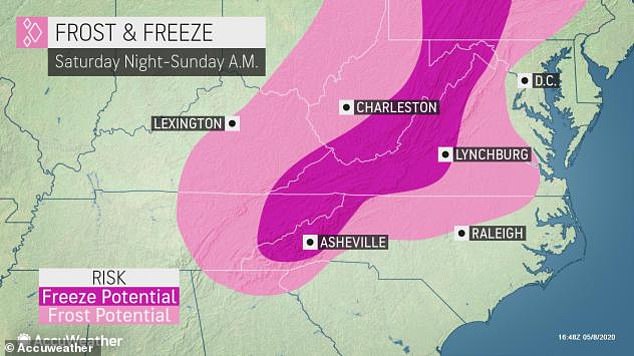 Parts of the East Coast, including Washington D.C., have the potential for freeze and frost risks

Vermont was transformed into an icy wonderland this weekend as the city of Shaftsbury saw nine inches of snow on Saturday.

At least 20 states, including Vermont, are under a form of freeze watch and freeze warning.

Vermont has a high of 38 degrees and a low of 29. On Sunday, temperatures will rocket to a warmer 51 degrees and is even predicted to reach 66 degrees next Saturday.

Further left, the Great Lakes got their own snowfall and a small portion – just 0.2 per cent – are covered in snow.

The small amount is still surprising to weather experts who don’t expect to see wintery weather as we nudge towards summer. 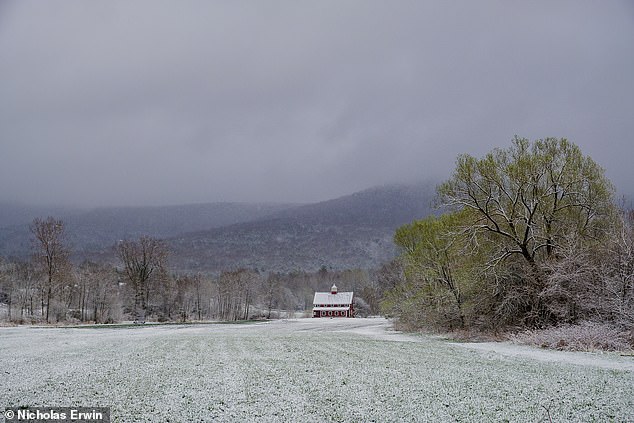 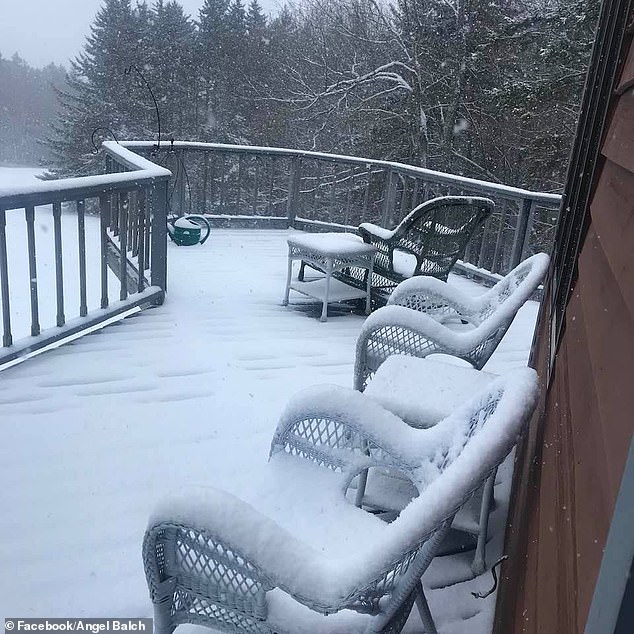 Shaftsbury, Vermont, has received nine inches of snow so far on Saturday

‘When lake-effect snow occurs in spring, the stronger sun disrupts the organization of persistent bands, and causes more of a ‘cellular’ effect, similar to pop up thunderstorms in the summer.’

He added that the snowfall, although less than the winter season, is still set to make an impact.

‘Still, while the persistent lake-effect bands that bury communities in the winter aren’t expected, very heavy bursts of snow and gusty winds can quickly reduce visibility and bring a quick coating on some grassy areas,’ he said.

Overall, Saturday will carry the bulk of cool weather in the northeast but it will begin to taper off after Monday.