The crime scene detective investigating what he called the ‘suspicious’ death of New York financier Shele Danishefsky didn’t dust for fingerprints or swab for DNA on the day she died because he intended to come back to the apartment after her autopsy, which was initially waived, the detective testified Thursday.

During a contentious cross examination, Detective William Brown told the jury in the murder trial of Shele’s husband, unemployed backgammon pro Rod Covlin, that he never recovered any physical evidence recovered from the apartment where Shele died on Dec. 31, 2009.

Despite his plan, Shele’s Orthodox Jewish family waived the autopsy and Shele was buried and the case was closed. When the family eventually consented to a post mortem examination, it was discovered that her hyoid bone had been fractured, a classic sign of strangulation. 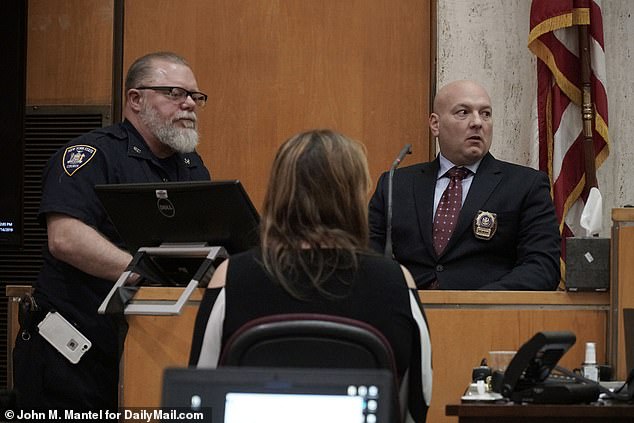 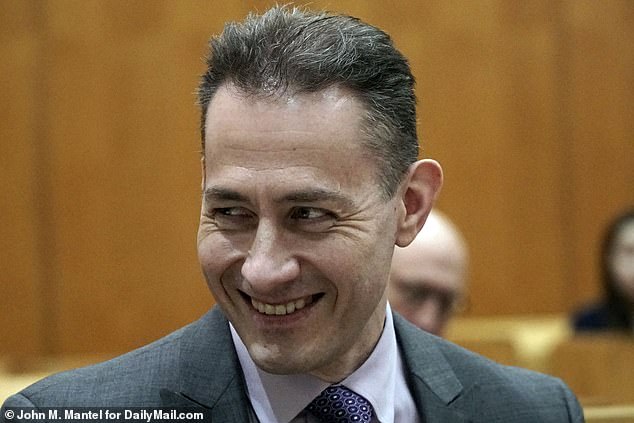 Accused murderer Rod Covlin, pictured on Thursday at Manhattan Supreme Court, is accused of murdering wife Shele to get hold of her $5.4 million fortune

While Brown insisted that he and other detectives considered the case suspicious although he wrote in his report on the case that it looked like Shele had fallen in the tub, which is what Covlin had initially told police what he believed had happened.

Defense Attorney Robert Gottlieb pressed Brown on the conclusion that Shele had grabbed on to a cabinet door as she was falling in the tub.

‘That’s how I described it in my crime scene report,’ a defensive Brown said.

‘It looks as if the victim fell while holding on to the door.’ That’s what you wrote?’ Gottlieb asked.

Brown also cataloged the crime scene photos he took, which were more gruesome and graphic than had previously been displayed.

Yadelin Sanchez, now a sergeant herself, told jurors in Manhattan Supreme Court that she drove her boss to the scene, where Covlin accompanied them down the hallway to the bathroom and, unbidden, related to them what he thought had happened to his estranged wife, UBS financier Shele Danishefsky. 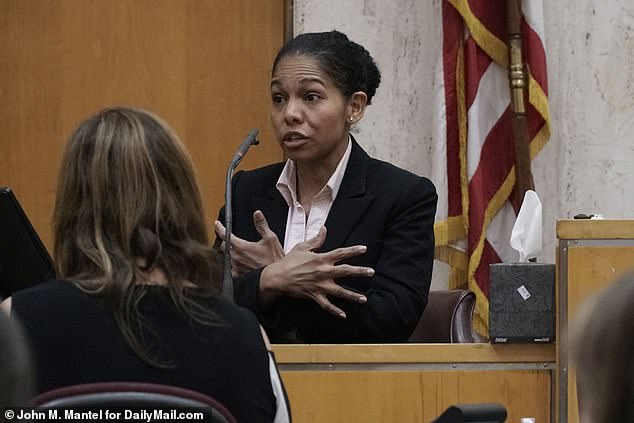 NYPD Sgt. Yadelin Sanchez said Roderick Covlin was upset but ‘no crying, no tears or anything’ when he showed her where his wife had died in the bathtub

He told the officers that he got the lifeless Shele from the tub and performed CPR on her, Sanchez said.

She said Covlin appeared to be upset, but ‘no crying, no tears or anything.’

On the way back to the living room, Covlin said, ‘I can’t believe this is happening’ and then embraced her boss, the since retired Sgt. Mary O’Donnell, Sanchez said.

‘He hugged my sergeant, he hugged Sgt. O’Donnell,’ Sanchez said. ‘She [O’Donnell] said, ‘I’m so sorry for your loss.’

She said that Covlin’s T-shirt was apparently dry because after the hug, ‘there was no wet anywhere.’

‘I remember thinking someone else removed the body from the tub,’ Noce testified. ‘I’ve removed children from a tub and got saturated. When you remove an object from a tub, whether a child or a fully grown woman, you’re bound to get wet.’

Covlin is accused of murdering Shele days after she spoke to a lawyer about cutting him out of her will.

Covlin faces 25 years to life in prison if convicted.