Police arrest four as they investigate murder of man, 43, who died in hospital after attack

Police arrest four as they investigate murder of man, 43, who died in hospital after attack

A murder probe has been launched by police following the death of a 43-year-old man who suffered serious lacerations to his body in Stockton.

Officers were called to a report of an incident at around 7.15am on Westbourne Street, Parkfield, on Sunday, and the man later died in hospital.

Earlier that morning, at around 5.45am, police had attended another incident on nearby Yarm Road which resulted in a 36-year-old man being taken to hospital.

He had suffered a head injury and lacerations to his torso but has now been released from hospital.

A murder probe has been launched by police following the death of a 43-year-old man after an incident on Westbourne Street (pictured), Parkfield, on Sunday

Officers believe that these two incidents are linked.

On Sunday, two men aged 18 and 39 were arrested on suspicion of murder and attempted murder in connection with both incidents and they both remain in custody.

Two further men, aged 20 and 29, have also been arrested on suspicion of conspiring to cause grievous bodily harm with intent. They also both remain in custody.

Anyone who believes they have captured relevant CCTV or dashcam footage, in the Westbourne Street or Yarm Road areas at the time of the incidents, are asked to contact police. 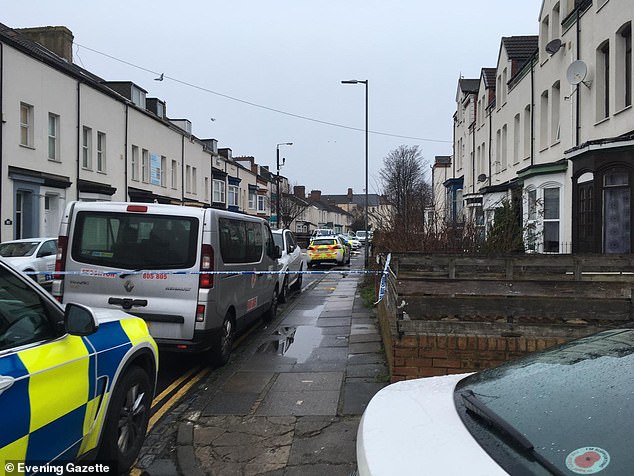 Police were also called to an incident on nearby Yarm Road the same morning and a 36-year-old man was taken to hospital. The believe the two are linked (pictured is Wesbourne Street)

Detective Superintendent Warren Shepheard of Cleveland Police said: ‘We understand the levels of concern caused by incidents of this nature and increased patrols will remain in the area whilst enquiries continue.

‘Please approach our officers with any concerns you may have and they will happily assist.’

Officers are also still appealing to anyone who may have witnessed either of the incidents or anyone with information to contact Cleveland Police on 101, quoting event number 232633.

Independent charity Crimestoppers can be contacted anonymously on 0800 555 111 or www.crimestoppers-uk.org.