Two teenage boys were stopped by police after they were caught riding their hired electric scooters along a busy 70mph dual carriageway.

The boys, who were slammed by the Tees Valley mayor Ben Houchen for their ‘sheer stupidity’, were spotted by officers at Teesside Retail Park riding their Ginger Hire E-Scooters along the busy A19 near Middlesborough on July 16.

The incident comes just days after Tees Valley became the first area in the UK to trial the pay-as-you-go e-scooters on the UK’s roads.

Cleveland Police went on to say that neither of the boys had been wearing any protective equipment, such as helmets or high visibility clothing.

The two teenage boys were spotted by officers at Teesside Retail Park riding their Ginger Hire E-Scooters along the busy A19 near Middlesborough on July 16. (Stock image)

Following the incident, Tees Valley mayor slammed the teenagers and said ‘no amount of planning can anticipate such sheer stupidity.’

He told The Independent: ‘Nobody would dream of cycling or riding a skateboard on a motorway, but it would seem that there will always be some idiots that need protecting from themselves and no amount of planning can anticipate such sheer stupidity.’

Meanwhile temporary Superintendent Graham Milne, from Cleveland and Durham Specialist Operations Unit, said: ‘Hiring e-scooters may seem like a bit of fun for some, but they’re not toys.

‘They can only be hired and ridden by holders of a valid driving licence and anyone found to be driving irresponsibly can have their driving licence endorsed, face a fine or criminal prosecution.

‘Anyone hiring a Ginger e-scooter must be over 18 and they obey the law in respect of motor vehicles exactly as they would a car or motorcycle or other vehicle.

‘Hired Ginger e-scooters are lawful with a driving licence but any privately owned e-scooters can only be ridden on private land with the land owner’s permission.

‘It’s also important to remind people that helmets and protective clothing are advisable to keep people as safe as possible.’ 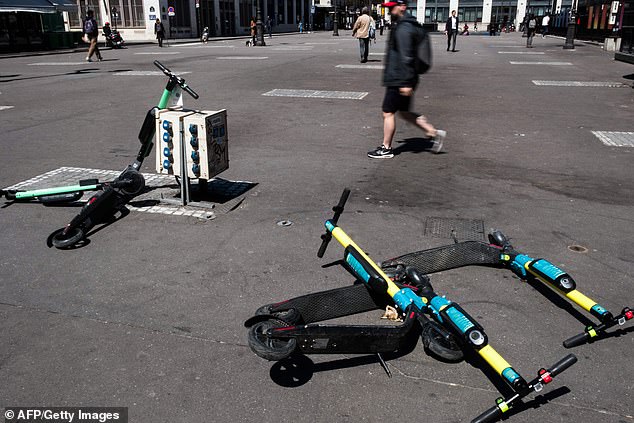 Pictured: In Paris parked e-scooters clutter the curbs and the city’s historic squares

YouTube star Emily Hartridge, 35, became the first person in the UK to be killed while riding an e-scooter in Battersea, south London, in July last year

Elsewhere the CEO of Ginger, the firm running the e-scooter trial said the company would continue to ensure ‘riders are aware of their responsibilities’.

Paul Hodgins said: ‘The guidelines for using the scooters are clear both prior to, and throughout, the hire of the scooters.

‘The trial is performing well and we’ll continue to work closely with all regional partners during this test phase to ensure riders are aware of their responsibilities to themselves and other road users.’

This month the Department for Transport announced that e-scooters would be allowed on Britain’s roads for the first time.

New regulations enabling trials of rental e-scooters came into force earlier this month and eighteen companies have already bid to be part of the trial.

The trials are being held for 12 months to assess whether the devices reduce traffic and what impact they have on the safety of users and those around them.

Riders who participate in the pilots will need a full or provisional car, motorcycle or moped licence, must be aged at least 16 and will be urged to wear a helmet.

However some fear the safety of the vehicles, which have already been involved in fatal accidents including YouTube star Emily Hartridge, 35.

Ms Hartridge became the first person in the UK to be killed while riding an e-scooter when she was struck by a lorry in Battersea, south London, on July 12 last year.

The grieving boyfriend of Ms Hartridge, Jacob Hazell, later revealed his partner was en route to a fertility clinic scan when she was killed in a crash on the e-scooter he had given her as a birthday present.

The Associated Press estimates there have been at least 11 electric scooter rider deaths in the US from the beginning of 2018 to last June- nine of those were on rented scooters.

What is the current law on e-scooters in Britain?

They must therefore meet a number of requirements in order to be used on the road, including having insurance and conforming to ‘technical standards.’

As they do not, they are considered illegal to use on roads in Britain.

The Metropolitan Police has also said it is illegal to use e-scooters on the road and riders risk being fined or even having penalty points on their licence.

E-scooters are also banned from using pavements under the 1835 Highway Act. E-scooters can be used on private land with the landowner’s permission.

However, from Saturday, you will be able to use them – under certain conditions.

A legal framework governing trials is set to confirm that vehicles will be limited to 15mph and will only be allowed on roads, cycle lanes and tracks, but not pavements.