Police charge man, 50, after BBC news reporter Sima Kotecha ‘was racially abused in the street and forced to cancel her live broadcast’

A man has been charged after a BBC reporter claimed she and her team were racially abused in the street while preparing a live broadcast.

BBC News journalist Sima Kotetcha was moments away from going live with a reaction piece to Boris Johnson’s Sunday night address to the nation when she said a man shouted abuse at her, her colleagues and her guests.

The group were filming in Leicester city centre when the incident took place.

BBC chiefs pulled the broadcast over fears the alleged abusive words would be heard live on air.

Now police have charged a 50-year-old man with using threatening or abusive words or behaviour.

Ms Kotecha, 40, who has in the past reported from Helmand Province during the Afghanistan conflict and recently from Rome at the height of Italy’s coronavirus crisis, took to the Twitter to vent her anger over the incident on Sunday night.

The journalist, from Basingstoke, Hampshire, said: ‘Apologies – but a man shouting terrible things at me has ruined it for everyone. I’m afraid not going to make it on the special programme.’

BBC News reporter Sima Kotecha was moments away from going live with a reaction piece to Boris Johnson ‘s address to the nation last night when she claims a man began shouting ‘terrible things’ at her, her guests and her production team 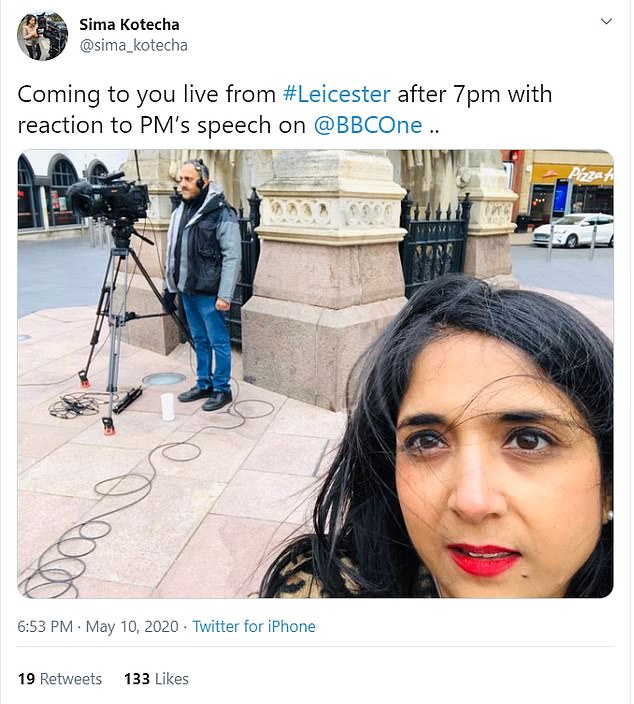 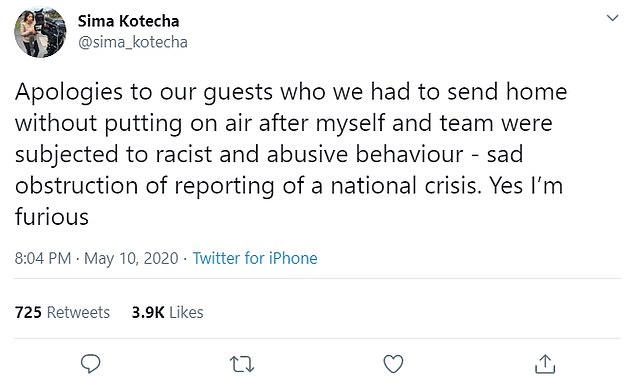 In a follow-up Tweet, she said: ‘Apologies to our guests who we had to send home without putting on air after myself and team were subjected to racist and abusive behaviour – sad obstruction of reporting of a national crisis.’

The BBC Press Team has also tweeted in support of Ms Kotecha and promised to report the incident to the police. 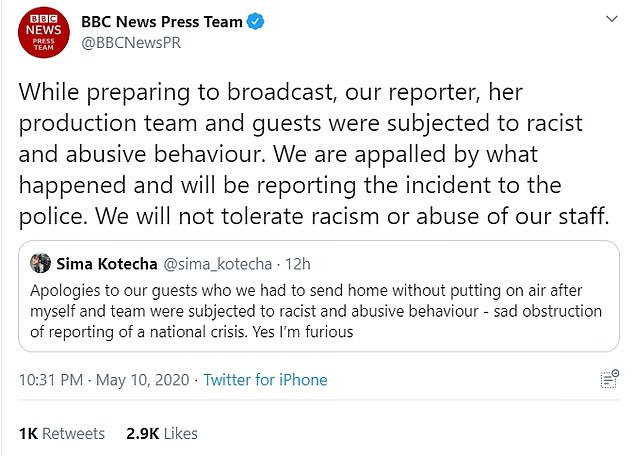 In a statement, on Twitter, they said: ‘While preparing to broadcast, our reporter, her production team and guests were subjected to racist and abusive behaviour.

‘We are appalled by what happened and will be reporting the incident to the police. We will not tolerate racism or abuse of our staff.’

Ms Kotecha was born and raised in Basingstoke, Hampshire, and later studied journalism at Goldsmiths University in London.

She began her career in local BBC radio 2003 and has since worked on some of the BBC’s biggest shows, including Panorama, Radio 4’s Today Programme and BBC News.

During her career, Ms Kotecha has reported from Helmand Province during the Afghanistan war, covered the devastating Haiti earthquake in 2010, as well as from Lebanon during the Syrian refugee crisis.

Yesterday’s incident of racist abuse took place in Leicester, which is one of the UK’s most multicultural cities.

A 2011 census showed less than half of the city’s population identify as ‘White British’.

The city has one of the largest Asian populations in the UK and is also home to significant African, Caribbean and Eastern European communities.