Rural police and crime commissioners fear locals will lash out at visitors as they try to protect their communities from the deadly bug.

Officers can no longer kick tourists out of hotspots after the PM eased restrictions on where people can travel in England from yesterday.

The National Police Chiefs Council was warned there will be a spike in vigilante attacks on houses, cars and people if officers are not out on the beat.

Second home owners in popular resorts such as Devon and Cornwall have already been targeted and in some areas pins and nails have been laid as traps for cyclists.

It comes as veteran Tory MP Sir Roger Gale urged visitors to stay away from coastal towns in his North Thanet constituency in Kent.

Chair of the National Rural Crime Network Julia Mulligan said she was worried villagers will take out their fear of the virus on tourists.

The PCC for North Yorkshire told the Telegraph: ‘We have seen some of that in the county. I think you are going to get a lot of concerns about social distancing and people’s ability to do that effectively.

‘People in local communities are worried. There needs to be more transparency around the risks of transmission in rural areas.

‘It’s not enough to say it’s a low risk. People need to understand that. I am not sure that is getting communicated effectively. If people can understand that, you can lower the anxiety that people feel around this.’

She added to the Guardian: ‘We’ve had small-scale vigilantism, if you like, so communities blocking off roads, people driving aggressively at cyclists.

‘People have been making it clear that people coming from long distances to enjoy our local beauty spots that are not local to them are not welcome.

‘There have been signs put up, we’ve had people calling cyclists out. All sorts of little things, nothing that is criminal but people really making it clear how anxious they feel.’ 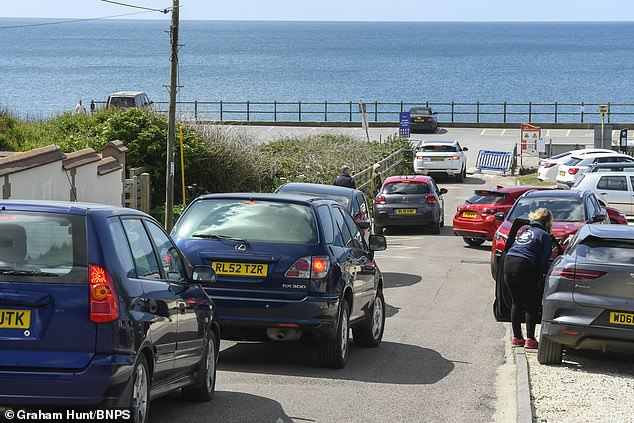 Under the relaxed guidelines, people can drive in household groups to destinations of their choosing, including parks and beaches.

But national parks urged caution for visitors planning their trips – with some still telling people to stay away.

Tourists were warned many facilities such as car parks, visitor centres and public toilets, as well as cafes and pubs, are not yet open.

A Local Government Association (LGA) spokesman also said local councils were reviewing car parking provision but would ‘balance this against avoiding the gathering of large crowds where social distancing will be difficult to maintain’.

One popular Lake District community group ‘descended into hate’ as people debated if tourists should be allowed or not.

A man commented on the Facebook page: ‘There is going to be a lot of vehicle vandalism.’

One person wrote: ‘I’m gagging to get up to the Lakes but I won’t be going simply because I’m worried about my car being vandalised by angry locals while I’m up a hill.’

Another posted: ‘This group has got really nasty… what has this virus turned us into? We were planning a trip up when everything has settled down but judging by the comments I do not think we’d be welcome.’

One man, who appeared to be from Cumbria, wrote: ‘I know we seem to have a nation of f***wits mostly townies that don’t adhere to the countryside code, but they’re going to come whether we like it or not I guess.’

Another, who said he was heading to the Lakes District on Friday, was also met with a torrent of abuse.

He wrote: ‘Glad things are getting to normality. I will be jumping in my car and heading over on Friday for the day! Providing the weather’s nice of course.’

But one angry local commented ‘Cumbria is closed bugger off’, while another added: ‘Well remember you probably won’t be welcome.’

And one person appeared to threaten to run over cars with a tractor, posting: ‘Just a thought anyone ever seen a Ford driven over by a Fendt 1050 Vario quad.’

The ‘stay away’ message was repeated in Cornwall as the Mayor of popular seaside resort St Ives effectively barred outsiders from the idyllic town.

The county has seen numerous cases of vigilante attacks, with one notorious incident seeing a woman’s car having paint poured all over it.

He told Cornwall Live: ‘There is no need for visitors to come to our town during the present crisis.

‘We do not want to import more Covid-19 cases and we do not want visitors to catch anything while they are here.

A woman’s car was seriously damage after vigilantes poured paint on it believing she was at a second home in a Cornish village.

Sue Skyba garnered dozens of supportive comments after she posted a picture of the damage to her yellow VW Beetle. 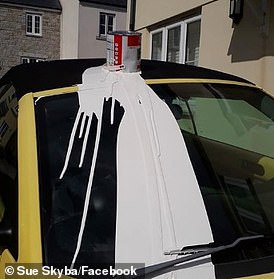 Sue Skyba posted a picture of the damage

She believes she was targeted because people thought she was using a second home near to St Austell in Cornwall last month.

But in actual fact it was her son using a friend’s empty property as he has an auto immune disease and wanted to be completely isolated.

‘While the Government has said you can drive and exercise outside all day, we are concerned that an increase in visitor numbers may actually delay when we can begin to re-open.

‘Our cafes, pubs, shops, accommodation providers, car parks and public toilets are all closed. We would love to be able to welcome you all back with open arms but now is not the time.’

Locals agreed, with one women from the county tweeting: ‘WE DO NOT WANT YOU HERE AND PEOPLE WILL DIE IF YOU TRAVEL TO CORNWALL.

‘There’s also a huge elderly population here and you will be putting them even more at risk.’

Another posted: ‘I think I speak for the whole of Cornwall when I say EVERYONE THINKING OF COMING HERE PLEASE F*** OFF YOU ARE NOT WELCOME.’

‘I’m not saying there won’t be a couple of comments… but we have got the advantage of being further away from the main conurbation and generally a polite population.

North Thanet MP Sir Roger – whose constituency includes seaside towns Margate and Herne Bay – said there should be ‘baby steps’ back to normality rather than a ‘leap in the dark’.

He said: ‘I have spent 37 years in Parliament promoting the joys of Margate and Herne Bay in my constituency and it breaks my heart to have to say, for the moment, ‘please don’t come to the seaside: we’re still shut’.’

Over the bank holiday weekend – before the Prime Minister announced the limited changes to the lockdown in England – ‘hundreds of people’ drove to Herne Bay and Margate from London, he said.

‘I am told that social distancing went out of the window and the car parks were heaving,’ he added.

‘I am really concerned that some of the London media has been actively encouraging people to head for the coast again this weekend and I think that is irresponsible.

‘I believe that the ‘drive to wherever you want to take exercise’ advice from the Government is premature and possibly sheer folly.

‘I want the seaside towns that I represent to be able to welcome people with open arms again – as we have always done in the past – but we need to take baby steps towards reopening, not a leap in the dark.

Blackpool’s tourism office deployed the curious tactic of rebranding itself on Twitter as ‘Do Not Visit Blackpool’ to repel tourists. 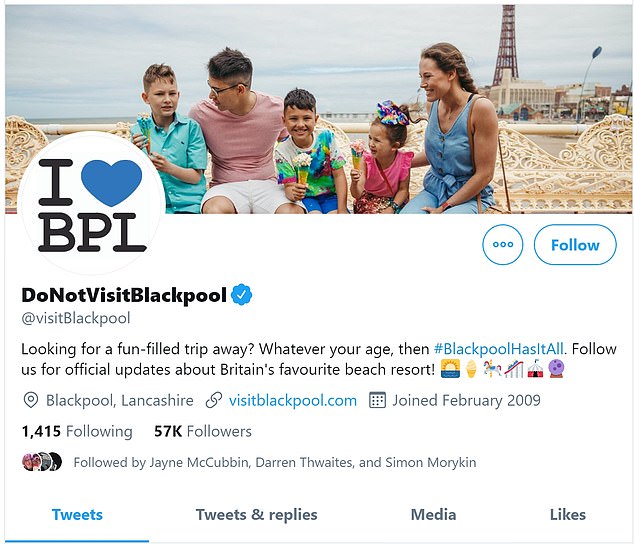 Council leader Simon Blackburn said the PM’s message meant there was ‘nothing we can do’ to stop visitors – but he urged people to stay away.

But Mr Blackburn said although they hoped to relaunch as a tourism hotspot in July, for now he would prefer people to ‘stay local’.

He said: ‘There’s nothing we can do, given the prime minister’s advice, to stop people walking on the promenade or the beach. But we urge people to not visit Blackpool at the current time.

‘None of the traditional attractions that you want to see will be open, you won’t be able to get the food you usually get, or do the things you can normally do.’

Scotland went a step further as a tourism chief warned the country will be closed to visitors this summer, as island communities fear a spike in coronavirus infections due to outsiders.

Government agency VisitScotland said it was likely daytrippers would be allowed to venture out once the lockdown lifts, and that self-catering businesses had indicated they would be ready to open.

But VisitScotland director Riddell Graham slated ‘confusion’ over different situations in Scotland and down south. 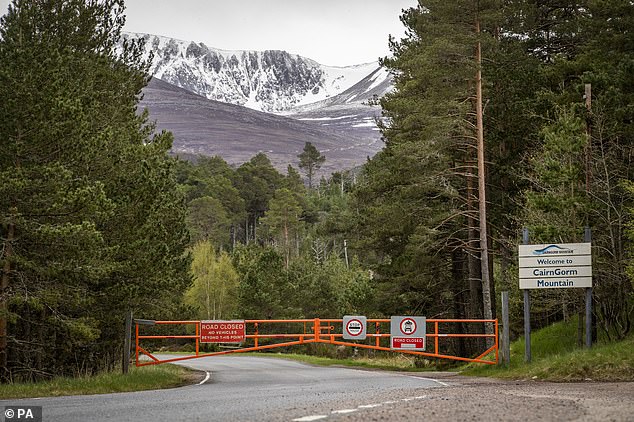 Scotland has gone a step further as a tourism chief warned the country will be closed to visitors this summer, as island communities fear a spike in coronavirus infections due to outsiders (pictured, a road closed at Cairngorm Ski Centre near Aviemore earlier this week) 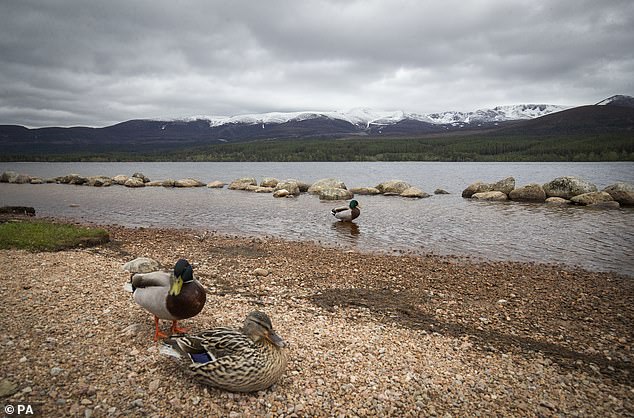 Government agency VisitScotland said it was likely daytrippers would be allowed to venture out once the lockdown lifts, and that self-catering businesses had indicated they would be ready to open (pictured, Loch Morlich in the Cairngorms National Park, near Aviemore, earlier this week)

Mr Graham said: ‘Some parts of Scotland have had little or no infections. They want to make sure that that doesn’t change through an influx of visitors from outside.

‘There is a very delicate balance to be struck. A really important thing we have to bear in mind is the concerns of communities, such as island communities.

‘We think some people will be genuinely concerned, particularly about travelling in groups and that the car will be coming forward as a means of getting around the countryside. That in itself causes real challenges in managing the flow of visitors.

‘Speaking to the countryside people, they are concerned about managing the potential impact on some of the hotspots that they manage, within the National Parks for example.

‘There will be some people who will be genuinely concerned about meeting other people and being exposed to visitors in a way they haven’t been up until now.’

He rejected the idea visitors could travel to Scotland this summer but he was optimistic of ‘some kind’ of reopening this year – which could happen at different times across the country.

Spokesmen for the Lake District, Peak District and Yorkshire Dales national parks suggested on Wednesday afternoon it was too early to tell if visitor numbers had changed as lockdown measures eased. 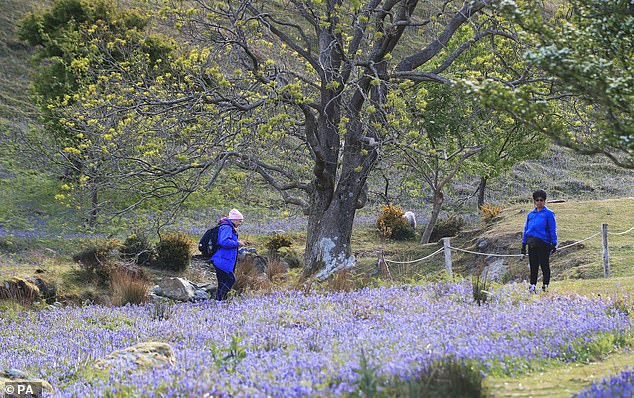 Walkers take a stroll at Rannerdale Knotts in the Lake District, Cumbria (yesterday), on the first day of lifting of coronavirus lockdown restrictions on leisure activities and outdoor exercise 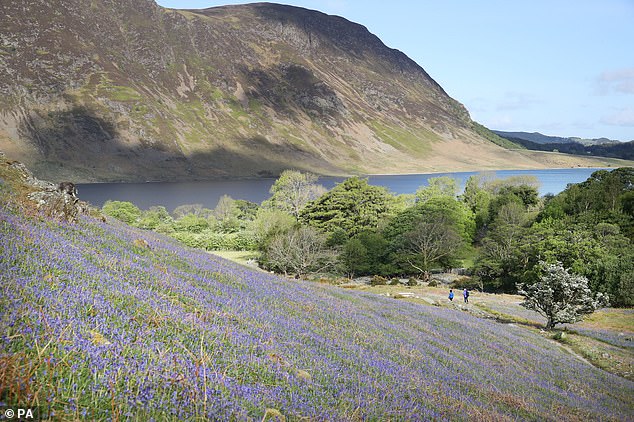 The Lake District National Park is urging people not to return yet, in order to help communities in Cumbria (pictured yesterday), which officials said has one of the highest Covid-19 infection rates in the UK

But in the Lake District it appeared the ‘stay away’ request from local politicians and public officials was being heeded.

In Windermere, Bowness, Grassmere and Keswick, there was no influx of visitors to places popular with tourists, with shops, bars and restaurants all shuttered.

Locals suggested the situation may change at the weekend and as the days and weeks progress.

Tim Farron, MP for Westmorland and Lonsdale, has written to Mr Johnson calling for there to be a maximum limit on the number of miles people can drive for exercise to help stop a surge in people travelling to the Lake District from outside of Cumbria.

On Wednesday Mr Farron said: ‘It’s good to hear that today so many people are heeding the advice from Cumbria Police, Cumbria Tourism and local health officials to not travel to Cumbria.

‘Of course, our main concern is what happens at the weekend.’

Colin Cox, Cumbria’s Director of Public Health, said: ‘I’d urge people to really consider whether a visit to the Lake District is the right thing to do at the current time.’