Police have abandoned investigating bicycle thefts, according to documents seen by The Mail on Sunday.

In a move branded as giving criminals a licence to steal, Bedfordshire police chiefs secretly decided that officers would no longer investigate thefts – even when bikes are worth thousands of pounds or belong to children.

Under the unprecedented cost-cutting move, detectives would not begin to hunt for the culprits or search for evidence to help catch them.

It is the first time any English force has set out a blanket policy not to try to solve a particular offence that affects tens of thousands of members of the public.

Under the unprecedented cost-cutting move, detectives would not begin to hunt for the culprits or search for evidence to help catch them (file image)

After being approached by The Mail on Sunday, Bedfordshire police last night denied they have a blanket ban on investigating bike thefts – but admitted they will only look at those involving prolific offenders or vulnerable owners.

But the plan was included in an official annual report published only in July, after being drawn up as part of a major cost review.

In a section headed ‘Future demands that will be left unmet’, Bedfordshire Police revealed that its senior leaders had decided in private to drastically reduce the cases that its Community Crime unit – dealing with common offences such as theft and car crime – would look into.

The document stated: ‘Chief officers agreed to a new intermediate service level, with the following reductions from current services:

‘No investigation of bicycle theft.

‘No appointments for bicycle theft or shoplifting.’

The shocking decision was made even though the same report showed that bike crime was soaring in the county. 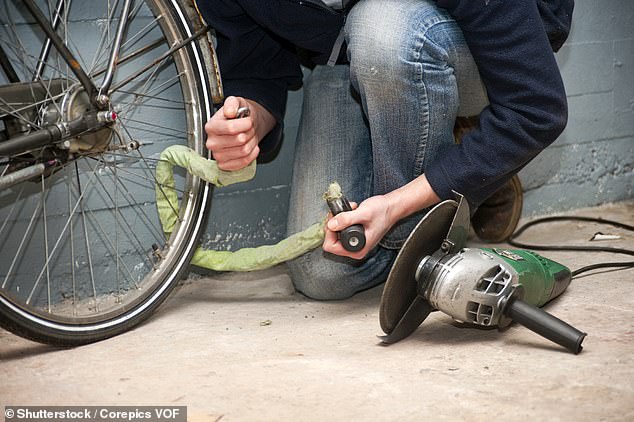 It said that between April 2018 and March this year there had been 1,333 reports of bicycle theft, up 29.7 per cent on the figure for the previous year.

Bike theft is rocketing nationwide as more people take up cycling and many invest in new electric models or high-end racers costing thousands of pounds.

There were 98,283 bicycle thefts reported to police in England and Wales to the year up to April 2019, according to the Office for National Statistics, up from 86,616 just three years earlier but it is thought many more incidents go unreported.

Research by specialist insurers Yellow Jersey found the average cost of a stolen bike was now £327.55, up from £218 a decade earlier.

Just last month, it emerged that Bedford railway station had the second-highest level of bike thefts in the country, with 188 stolen in the past three years.

The same suspect was believed to have taken 11 bikes from the station – worth a total of more than £4,500 – between March and May last year.

Bedfordshire Police took the drastic decision to stop investigating bike thefts after being forced to implement more than £35 million of cuts since 2010. Its annual budget is £113 million.

Last year, the Home Office agreed to give the force an extra £4.5 million to tackle soaring levels of knife crime and ‘county lines’ drug-dealing gangs.

But the local Police and Crime Commissioner Kathryn Holloway says Bedfordshire is still underfunded ‘to the sum of £10 million’.

But they have plenty of time for ice cream

Posing with their ice creams for Bedfordshire Police’s community twitter feed, these are three officers of the force that claims it’s too cash-strapped to probe crimes – including bike thefts.

But still the force employs a Community Cohesion Team which comprises a sergeant, two PCs and three PCSOs.

These officers do not investigate crimes – instead they simply ‘monitor tensions’ and attend a raft of festivals, parades and community events.

Recent photos on the unit’s Twitter account show the officers posing with students at a freshers’ fair, putting up school playground equipment alongside staff from McDonald’s and dancing with fans at a cricket match. 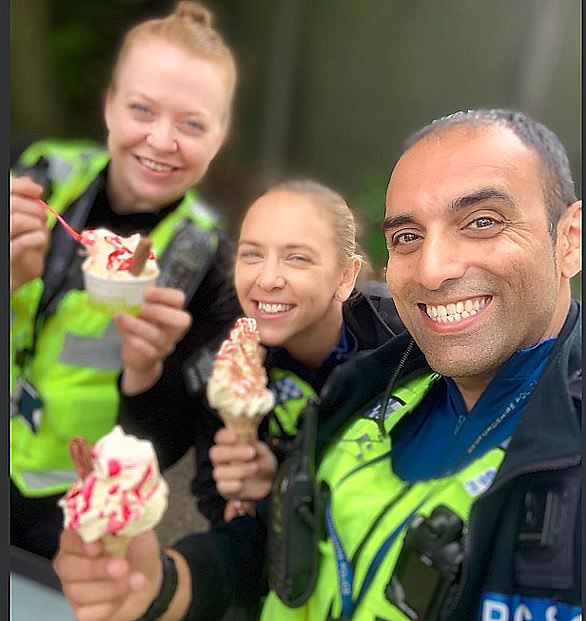 Harry Fletcher, of the Victims Rights Campaign, said: ‘Bikes can cost thousands of pounds these days and theft creates victims.

‘This policy is creating a licence to steal and to make money for criminals.’

Louise Haigh, Labour’s Shadow Police Minister, said: ‘It is thoroughly unacceptable for any police force, no matter their financial situation, to decide that certain crimes will simply not be investigated.

‘The crimes that matter most to the public – theft and burglary – are too often not the priorities of the police and that is unconscionable.’

A spokesman for Bedfordshire Police told The Mail on Sunday that the force had not stopped investigating all bike thefts.

The spokesman said: ‘All reports will be investigated, however they will be triaged to ensure a focus on prolific offenders and to protect our most vulnerable victims.’